**This post originally appeared on my other blog, YinMomYangMom.com.**

If there is ever a time for red velvet, friends, that time is right now.

I mean, people go crazy for it all year ’round.  I think because it’s so striking to look at.  All that gorgeous, deep red against pillows of snowy white frosting.  You see it and you just can’t help but want a taste!  Especially around Valentine’s Day…

I’ve wrinkled up my nose about it before though.  Did you know it takes like five bottles of food coloring to get that color?!?  True story.  Loads and loads of artificial coloring.  And that stuff is thought to cause all kinds of problems for little kids, I’m sure you already know.  Kind of ironic that it’s so irresistible to them…

Last Valentine’s Day, I got off my food coloring high horse, sucked it up, and made red velvet macarons.  They were scrumptious (of course), and a big hit (of course), but health-wise, I felt it was a compromise.  When my sister got wind of it, she forwarded me a great Red Velvet cake recipe she had come across, that uses beets instead of artificial coloring!

I’ve made it several times as cupcakes, and it’s just terrific.  The author of the recipe (Sophistimom) has gone to great lengths to ensure that the color is a beautiful, vibrant, ruby red, and the cake itself is so moist and delicious!  The beet flavor is extremely subtle.  Mr. Allie has a deep and passionate hatred for beets, and when I made the cupcakes for the first time, I had him taste one without telling him the secret ingredient.  He loved the cake and had no inkling whatsoever that it contained his most despised ingredient.

I’ve been itching to make whoopie pies for a while now, so, I figured, let’s try putting a spin on Sophistimom‘s genius Red Velvet recipe!

If you’ve never heard of a whoopie pie, it’s basically like if a cupcake and an oreo got together and had a delicious little hand-held portable-pastry love-child.  A cakey cookie, sandwiched around a sweet and fluffy filling.  Traditionally, the cake is chocolate, but, since it’s Valentine’s Day and all…

Cream butter and sugar together until nice and fluffy and pale.

Add in the yolk and mix until combined.  Then mix in the beet puree*, buttermilk, lemon juice, vinegar, and extracts.

In a separate bowl, whip the egg white to stiff peaks.

Fold the fluffy egg whites into the cake batter.

While that is going, make the filling.  Just throw all the ingredients in the mixer and whip ’til fluffy!

Once the cakes are all cooled off, just top half of them with a generous mound of the filling, sandwich, and enjoy! 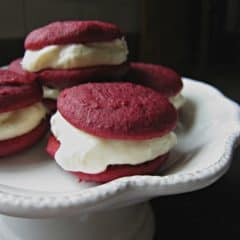 How do you feel about Red Velvet?  Are you okay with the artificialiness?  Maybe just once in a while?  How about beets?  Is this recipe something you’d be willing to try?

*For the beet puree, just wrap a few beets in foil, and roast in a 400 degree oven for about 90 minutes, or until fork-tender.  Peel and puree in the food processor.

**Be sure to use natural cocoa powder, NOT Dutch-processed.  If you substitute a cocoa that has been processed with alkali, it will mess with the pH of the cake and change the color purple.  Still delicious but not so Valentiney.