**This post originally appeared on my other blog, YinMomYangMom.com.**

I know you just love ’em, in all their sweet, marshmallowy, melt-in-your-mouth glory:

I initially started experimenting with French Macarons as part of a series I created for YinMom YangMom on 2012 Food Trends for the Home Cook.  French Macarons were predicted to be a huge trend this year, and if the search terms leading people to this blog are any indicator, then I’d say that prediction was right on the money!

For today’s macaron adventure, I’ve decided to show you a recipe that makes a perfect homemade gift.  ‘Tis the season, right?  We all want a little chocolate splurge at this time of year, and the addition of some warm spice makes these just perfect for the holidays!

Macarons are so special because they aren’t the sort of thing that everybody goes around making.  Besides being trendy, they also have that little bit of European mystique surrounding them.  They are adaptable to so many different flavors, (and colors, so they are also beautiful to look at!) but they can be a little tricky to make, so I’m here to make it super simple and foolproof for you.  Why not let’s just make this an in-depth tutorial for all the macaron maniacs out there?

I’m also going to show you my measuring method, which results in the least possible amount of dirty bowls in your sink.  With all the weighing, sifting, and mixing, macarons have the potential of leaving your kitchen looking like a hurricane just blew through if you aren’t judicious about your dishes (I swear I didn’t mean to do that!).

And finally, I’m including links to purchase all of the special equipment and ingredients you will need, so you can grow up to be just like me 😉  Just click the links and set yourself up for macaron success!

The best way to measure your ingredients is by weight, so, get out your kitchen scale (if you have one), to get the most exact quantities possible.  If you don’t have a kitchen scale, you can purchase one at my shop.  Or, look at the bottom of this post for a rough conversion of quantities into standard (cups and teaspoons) measure.

The measuring process begins with weighing the egg whites, and then the quantities of all the other ingredients are determined by ratio.

Start by placing your large mixing bowl on the scale and pressing “tare” to zero it out.  (You should be using the large bowl from your stand mixer, or the bowl you will be preparing the batter in.)  Add in the egg whites, and write down the number.   For this post, I’m using three egg whites, which weigh out to 93 grams, and will yield approximately sixteen 1 1/2 – 2″ diameter macarons (or 32 pre-sandwiched shells).

Set the whites aside.  Now place your sifting apparatus on the scale, and zero it out.  (Here is my favorite sifter.)  Multiply that number by 1.1.  This tells you how much almond flour to use.  93 grams x 1.1 = 102 grams almond flour.

Zero the scale again, with the sifter and almond flour still sitting on it.  Now multiply your egg white number by 1.65.  This tells you how much powdered sugar to use.  93 grams x 1.65 = 153 grams powdered sugar.

But since we are making chocolatey shells, we’ll want to scoop 2 tablespoons back out and replace it with a good quality cocoa powder, such as Scharffen Berger.

Sift everything together, and discard those big pieces that don’t go through the sifter.  Set aside.

I like to measure everything out the night before (hence the crappy photos.  Sorry!). Older, room temperature egg whites will whip up better.

Now for the fun part!

Whip the whites until foamy.  Gradually add in the superfine sugar and continue to whip until glossy and stiff.  (Don’t overbeat or they will get dry.)

Now dump the almond flour/powdered sugar/cocoa mixture into the meringue and fold it in.  You will lose a little volume at first, but try not to smoosh too much of the air out of the whipped egg whites.

After around 40 strokes, it should be fully incorporated, kinda stretchy, and “gloopy.”  Sort of the consistency of shower gel.  Or really runny hair mousse, (if you are a child of the 80’s, such as myself).

Scoop the batter into a large pastry bag fitted with a large, round tip.  (I use a Wilton 2A.)

If it’s trying to escape while you’re filling your piping bag, then you mixed it right!

Line a heavy baking sheet with parchment paper, and pipe the batter into half-dollar sized rounds.  The batter should flow and puddle and smooth over.

Preheat the oven to 375 degrees and set your macaron shells out to dry.  After about 20 minutes or so, they should have a thin, dry, papery membrane on top.  (This time can vary based on humidity levels in the air.)  Pop them into the oven and lower the temperature down to 325 degrees.  Bake for 15 minutes, and let them cool on the baking sheet.

While that is going on, chop 4 ounces of good quality chocolate, such as Scharffen Berger, and bring 1/4 cup heavy cream to a simmer.

Pour the hot cream over the chocolate and stir until combined.  Add in 1/2 teaspoon cinnamon and a pinch of cayenne pepper, to make it Mexican.

Once the macaron shells are cooled and peeled from the parchment, and the Mexican chocolate filling is completely cool and set up, pipe about a tablespoon of filling onto half the shells and sandwich.

I lay my little beauties on a bed of festive tissue paper, and nestle them into a pretty box to give to the most specialest people in my life.

These are at their best after they’ve had a chance to “mature,” or when the crumbly-pillowy shells have married with the rich chocolate filling.  This takes about a day.  After that, they’ll keep in the fridge for three days or so.

Here’s that ratio one more time: 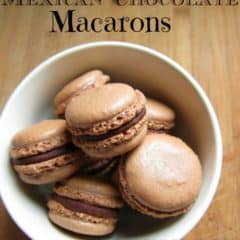 I know French macarons can be tricky, so hopefully this tutorial gives you confidence and brings you lots of success.  And smiles to the lucky people you give them to!
Christmas Cookies Hannukah
3 Comments // Leave a Comment »
« Previous PostCranberry-Orange Baked French Toast Cups
Next Post » All-Natural Red Velvet Whoopie Pies