This creamy, dairy-free drink tastes just like a rice pudding milkshake!  You’ll love the hint of cinnamon, toasted almond, and coconut in this fun twist on traditional Mexican horchata. 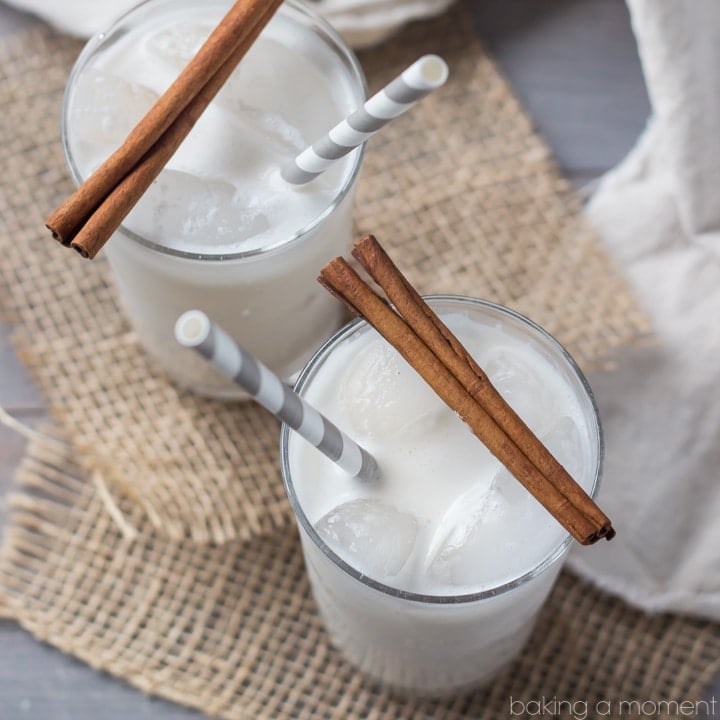 We did something totally new and different over the weekend!  Well, new to us anyway.  We went to a Nascar race!  I know, WOW!

If you know me at all then you know I’m not really much into sports of any kind.  But I’m married to a raging sports-nerd, and I have two very boy-ish sons.  So, needless to say my world is quite different than what I ever could have imagined for myself.  There are lots of little league games and fridge-hockey and generally loud and dirty activities happening most of the time.  But, for the most part, they are into more “traditional” competitive sports, like football, basketball, etc.

Now my little guy become addicted to the iPad and he loves to find silly YouTube videos to watch.  He recently discovered Nascar through this channel, and it’s been on repeat for the last several days.  Hubby was looking for a fun family activity on Sunday, when he realized there was a big race happening not too far from where we live.

So, we packed a cooler and piled into the car to see what we could see.  And I have to say, I can understand why people get so into it.  It was thrilling!  The noise is spectacular, and the cars are flying by so fast you can hardly even make them out.  They just flash by, every few minutes.  It’s not even a blur, it’s a flash!  Watching the pit crews is astounding.  There’s just a ton of action and you can feel the electricity in the air.  We only stayed for a little over half the race but in that time we saw 3 crashes (no injuries) and this unbelievable sequence of events unfolded right before my eyes.  Thankfully no one was seriously hurt, but that racecar driver was later quoted to say he felt it cost him the race.  All 3 drivers that had been in the lead ended up running out of gas in the last lap, so the cup went to the guy that was just seconds ahead of him.  Drama!

Sometimes it’s good to step outside of your comfort zone!  It was a truly memorable experience and I’m so glad I had the opportunity to give it a try- it was so much fun!

This post kinda falls into that same category.  I have definitely heard of horchata before, but never have I tasted it, and certainly never thought to make it.  I know it’s big in some parts of the country, but around where I live it’s just not really on the radar.  But one of the things I just love about blogging is how it pushes me to make and try things I probably would have never had the inclination to otherwise. 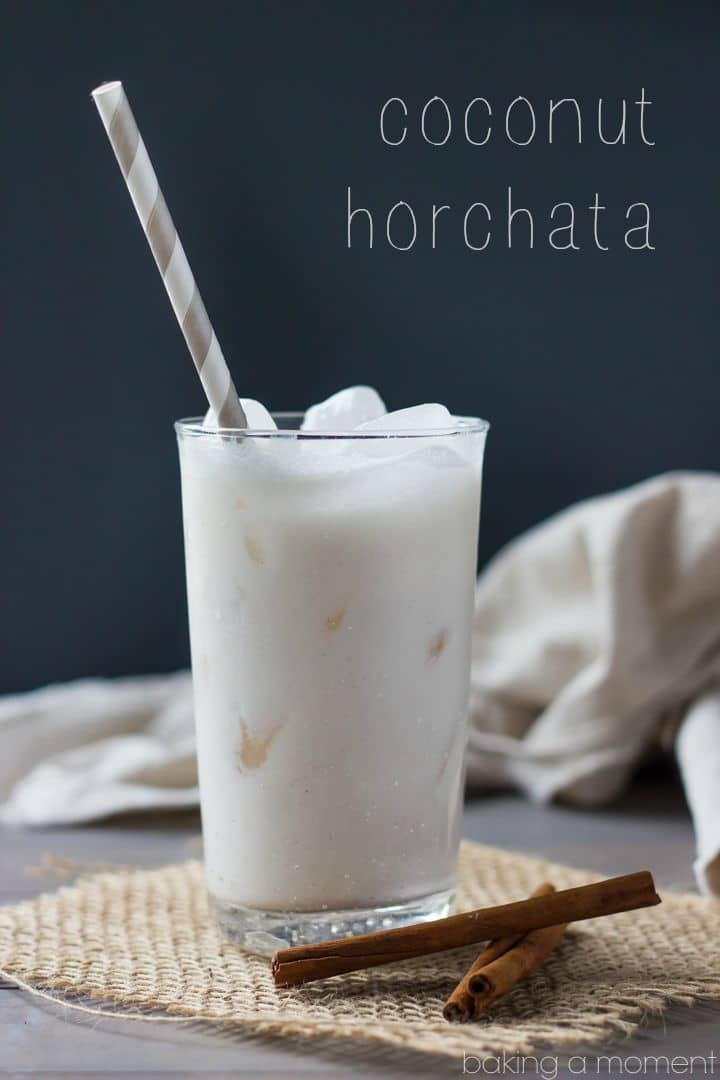 I’m so glad I did because this was easy and fun to make, and my guys seemed to really enjoy it.  Mr. Allie said it reminded him of a rice pudding milkshake.  He’s a big rice pudding fan, so I took it as a compliment!

This drink is cool, creamy, and refreshing, with the familiar and comforting flavors of rice and cinnamon.  It’s amazing how creamy it is, for being dairy-free.  Usually, it’s made with water, and falls into the “agua fresca” category of traditional Mexican drinks.  But I thought it would be fun to add a coconut twist.  I was really happy with the added richness the coconut milk brought, along with that summery tropical flavor. 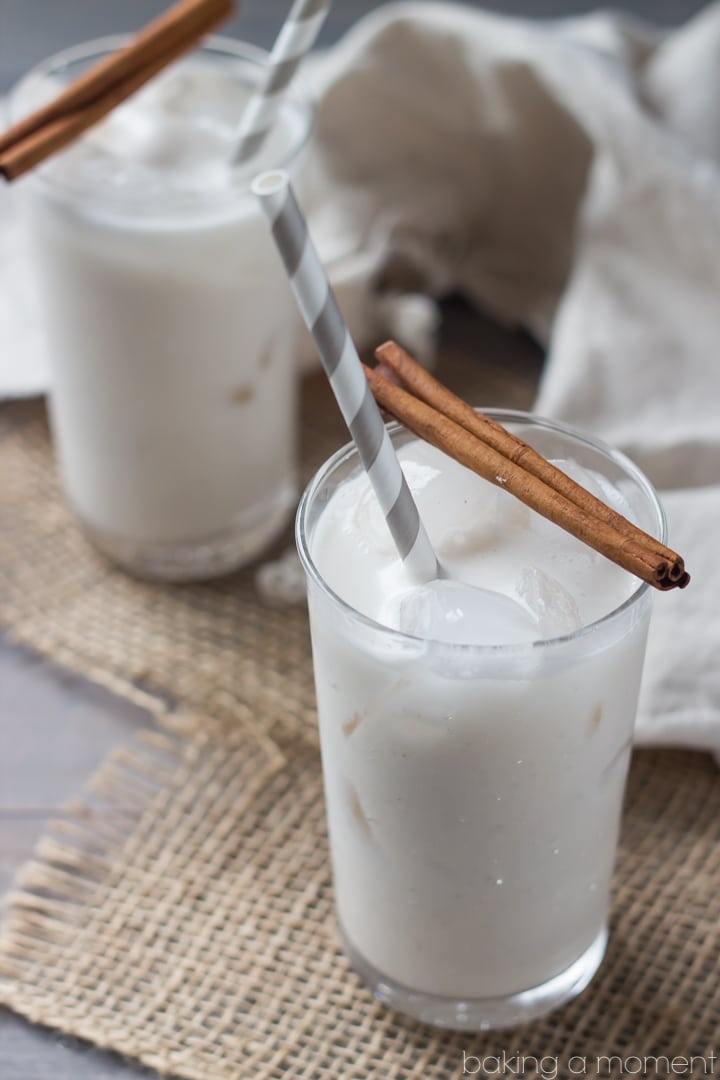 We just sipped it over ice, but I think it would also be really good with a shot of rum added to it!  Here’s to new experiences! 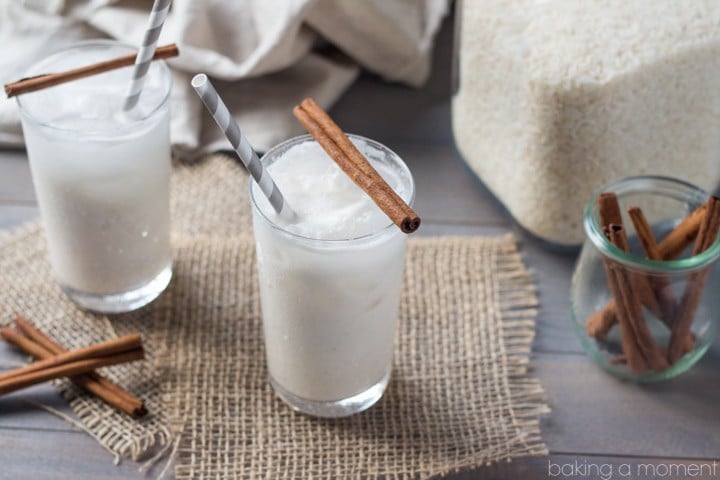 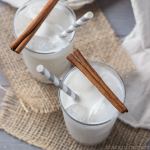 This creamy, dairy-free drink tastes just like a rice pudding milkshake! You'll love the hint of cinnamon, toasted almond, and coconut in this fun twist on traditional Mexican horchata.