Homemade cajeta is so addictive, and so easy to make!  Serve with a big basket of baked churros for dipping.  If you like dulce de leche, you’ll adore this Mexican caramel sauce, made with goat’s milk! 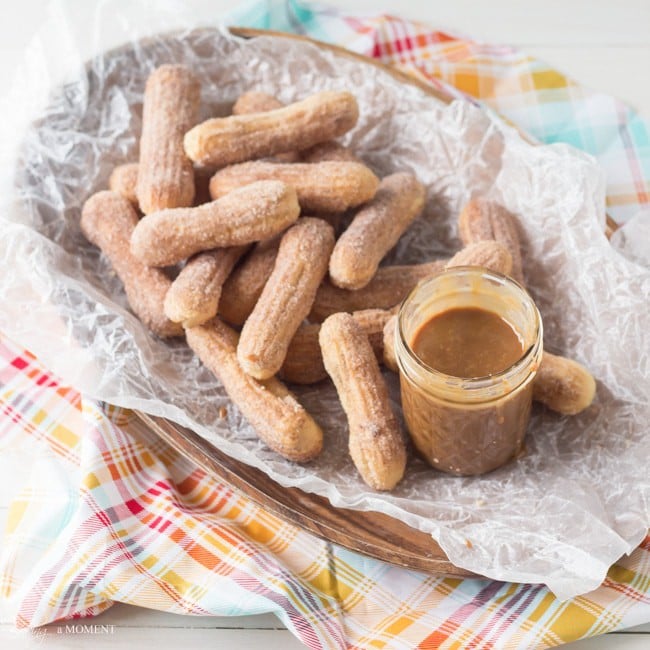 I have a few important questions for you:  Do you like donuts?  With cinnamon sugar?  How about caramel?

Pretty much a no-brainer, right?  Like, duh.  You’re reading Baking a Moment, after all, so it kinda goes without saying I guess.

Now tell me, what are your feelings about goat’s cheese?  That creamy, soft mouthfeel?  That hint of tanginess?  That almost chalky, clean quality it has, that you just can’t quite put your finger on?

I absolutely adore it, and I can’t ever get enough.  So, naturally cajeta needed to happen in my kitchen, ASAP! 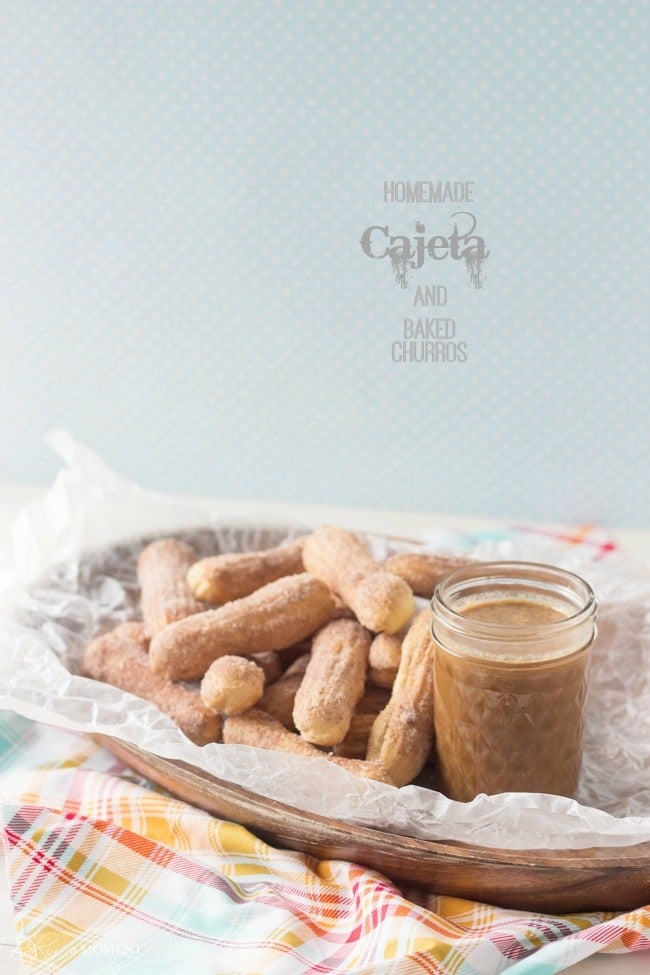 Have you ever had cajeta?  Have you ever heard of cajeta?  It’s Mexican caramel, like dulce de leche, only it’s made with goat’s milk!  Omg, you guys.  It’s like heaven in your mouth.

Can we all agree that caramel, in general, is like, the best taste in all the land?  Ok now imagine a caramel that’s just got the subtlest little difference.  It’s just enough to make you go “Wow, that is really fabulous… and gee what is that I’m tasting…?”

It’s goat’s milk.  It’s milk, but from a goat instead of cow.  <– I probably didn’t need to explain that just now.  But it’s true!  It tastes like the milk you are used to, but with the teensiest little difference.  Creamy, a little tangy, really clean tasting.  If that makes sense.  And simmered down for hours in a big pot with lots of brown sugar, it’s positively transcendent. 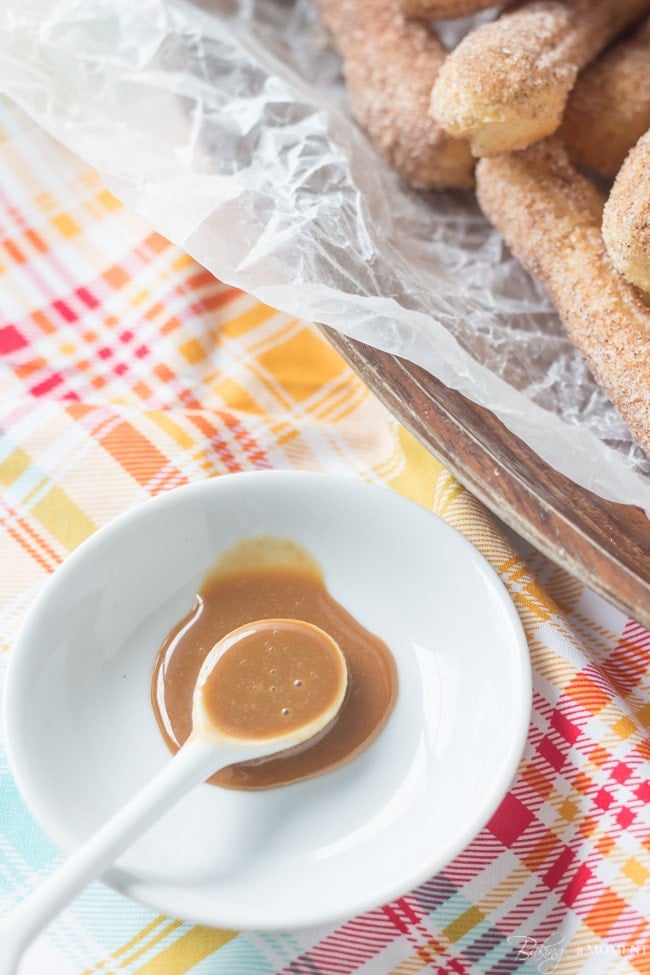 And that’s really all there is to it.  It takes longer to make than my Simply Perfect Salted Caramel, but on the other hand, it’s almost entirely down time.  Just let it simmer away and do it’s own thing. 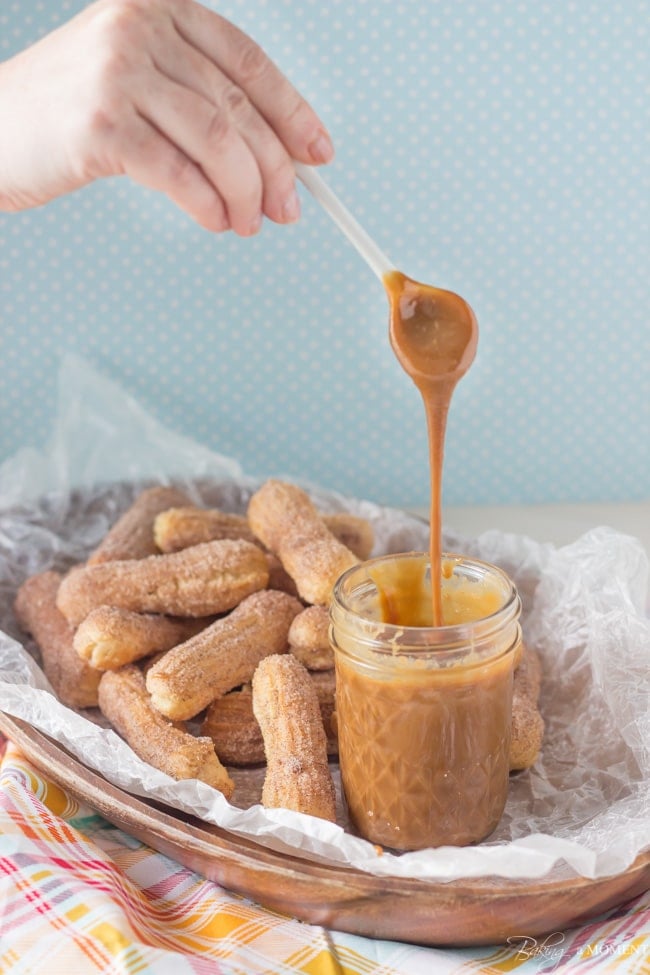 The hardest thing is probably finding the goat’s milk, but I didn’t really even have too much trouble with that.  They had it at Whole Foods, but I actually found an even better selection at good ol’ Shop Rite.  If you have a store near you that has a decent selection of “ethnic” foods, in particular Hispanic, go there.  Or a higher-end grocery store with a lot of products for people with food allergies/sensitivities would be another safe bet.  Because goat’s milk is often a lot gentler on the tummy than cow’s milk.

A lot of times you’ll see crepas de cajeta on the dessert menu at a Mexican restaurant (which are crepes with cajeta drizzled on top- ORDER THEM!!!), but I decided to go a different route and pair my cajeta with a big platter of baked churros.  It’s as simple as piping a batch of my Simply Perfect Pate a Choux into 4-inch logs, baking them up, brushing them lightly with melted butter, and tossing them in cinnamon sugar.  I really like using this kind of tip, it gives them the crunchiest grooves for the cinnamon sugar to get caught in 😉

Just be sure to bake them until they’re nice and brown, so you get a nice texture.  If you pull them from the oven too soon, they get wet inside and deflate.  Whomp, whomp.  Make sure they’re dry, and really light and hollow. 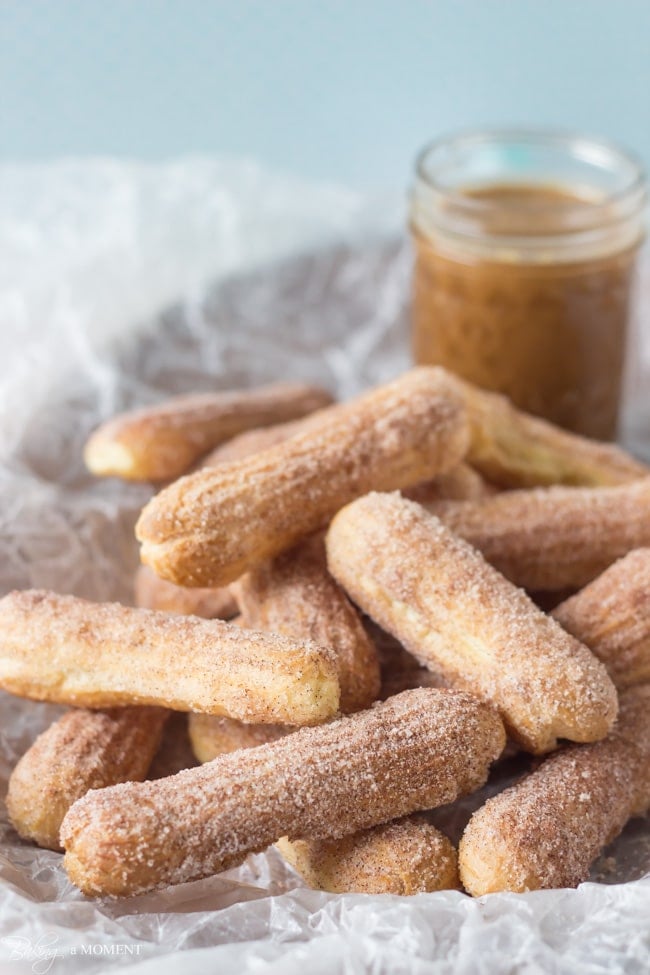 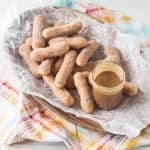 Homemade cajeta is so addictive and so easy to make! Serve with a big basket of baked churros for dipping. If you like dulce de leche, you’ll adore this Mexican caramel sauce, made with goat’s milk!

To make traditional fried churros, use this recipe: How to Make Churros.