Leave the Entenmann’s on the shelf, and try these homemade crumb donuts instead!  Once you’ve tasted the rich, tender cake, the sweet cinnamon glaze, and the buttery crumb topping, you’ll never go back to store-bought! 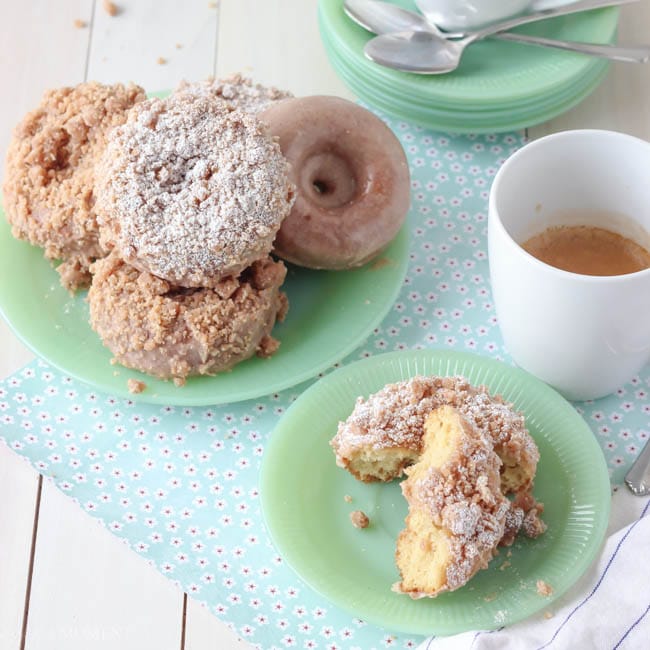 I think I cracked the code!

I’m talking about those soft, yet slightly crunchy, buttery, cinnamon-sugary streusel on the top of those melt-in-your-mouth crumb donuts you pick up at the local convenience store.

Yes, I eat them too.  And I enjoy every last morsel.  And so do my kids.  Which kind of freaks me out a little.  Because how can something sit on a convenience store shelf for weeks on end without getting moldy or stale?  Unless it’s loaded with chemicals.

I prefer my crumb donuts to be loaded with farm fresh eggs.  And nutmeg.  And tangy sour cream.  And drowned in a cinnamon-vanilla glaze.  And totally encrusted with buttery brown sugar crumbly-crumbs. 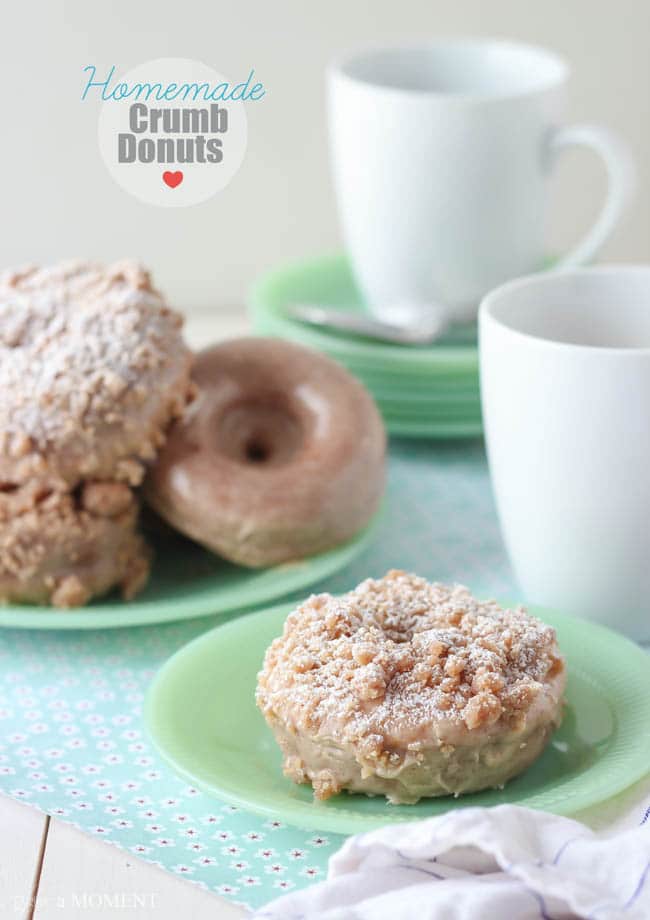 The fact that you’re even here at all tells me that you need little convincing that homemade is better than store-bought, so let’s just talk about how fabulous these babies are.  The cake is so tender it’s almost creamy.  They’re subtly sweet with the barest whisper of freshly grated nutmeg.

They’re totally immersed in this sweet glaze that forms a thin crust all around.  The outside is dry, but it shatters and gives way to a moist interior.  The cinnamon and vanilla hit you like whoa. 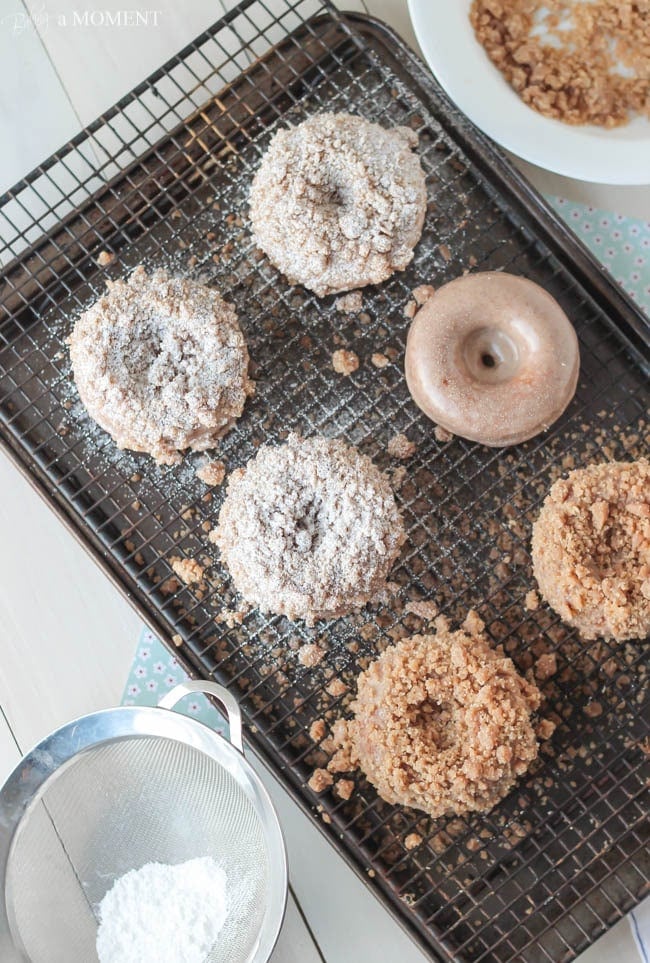 And the crumbs.  Those crumbs!  A little crunch, a little tender, almost granular quality between your teeth.  Butter, brown sugar, a little flour, and a lot of warm, spicy cinnamon. 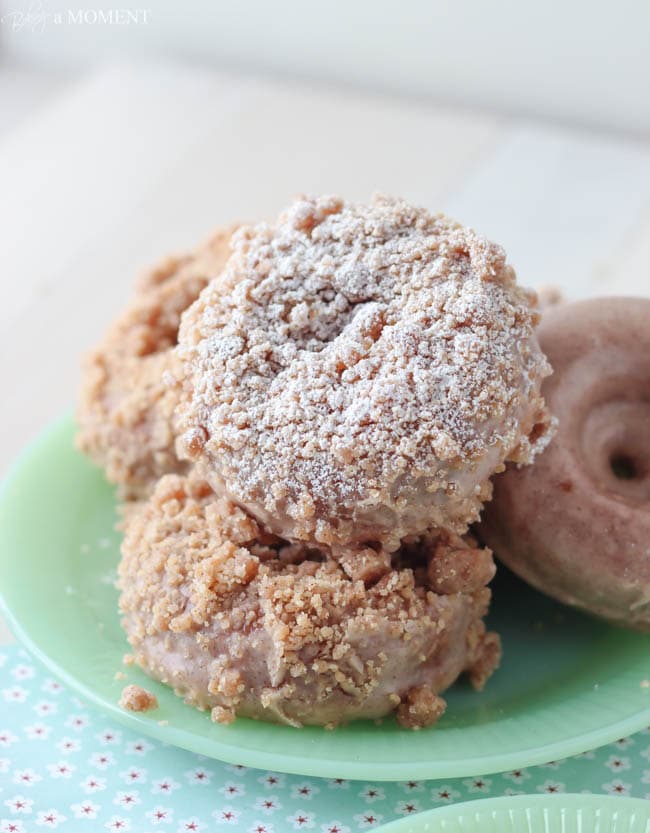 It took me a few tries but I think I totally nailed it.  At first, I was thinking the streusel should be baked on a sheet pan, but that made it really crunchy, like a cinnamon tuile or something.  The key is to cook it on the stovetop!  It only takes 5 minutes or so.  Just melt the butter and stir in the remaining ingredients.  Cook the “raw” taste out of the flour for a few minutes and you’ll have what resembles wet sand.  As it cools, it firms up and it can be crumbled and pressed into the wet glaze.  A flurry of powdered sugar and you’re in crumb donut heaven! 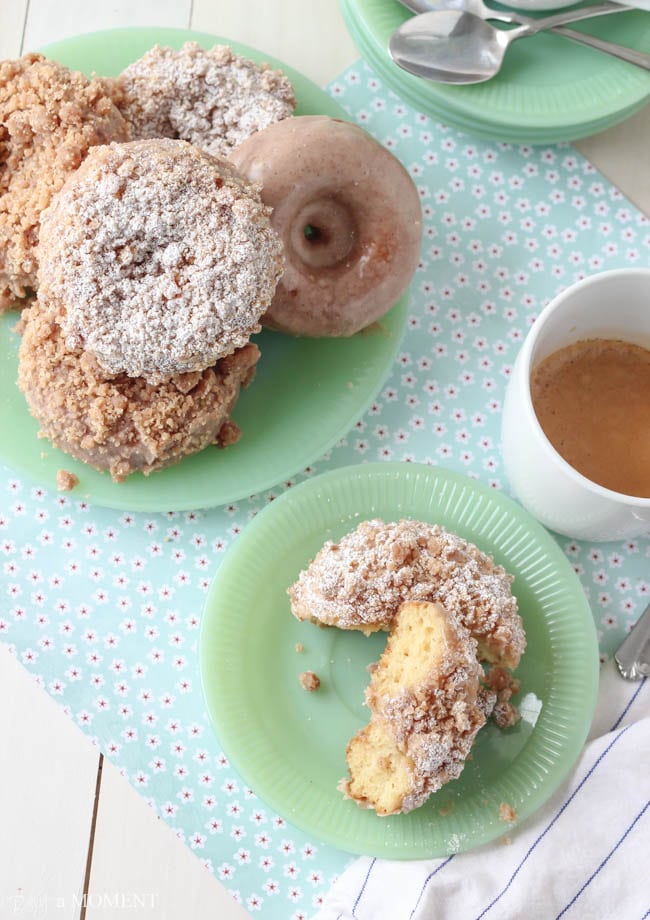 Do you guys know about Fasnacht Day?  It happens to be tomorrow.  Here in the heart of Pennsylvania Dutch country, it’s a pseudo-holiday that we very much look forward to.  In other parts of the world, you may know it as Fat Tuesday, Shrove Tuesday, or Carnivale.  It’s basically an extravaganza of sugar, butter, and fat consumption, in preparation for Lent, which begins the following day.  During Lent, these types of indulgences are typically abstained from, as an act of devotion.  These homemade crumb donuts are not exactly authentic fasnachts, since they are baked and not fried, but they are a super yummy and fun treat!  And there’s no going back to the convenience store after you’ve had one of these! 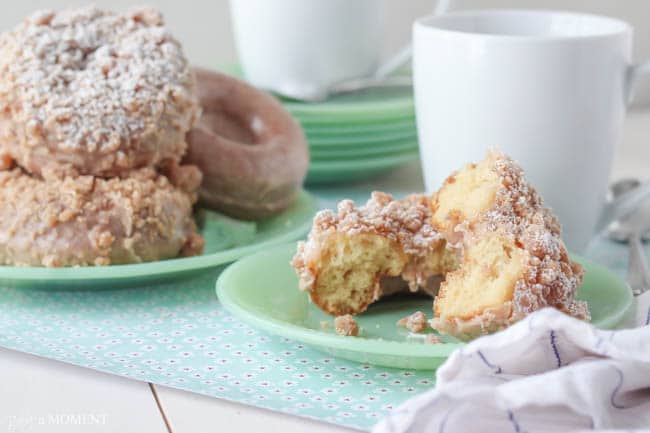 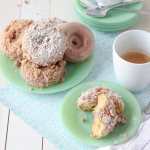 Leave the Entenmann's on the shelf, and try these homemade crumb donuts instead! Once you've tasted the rich, tender cake, the sweet cinnamon glaze, and the buttery crumb topping, you'll never go back to store bought!