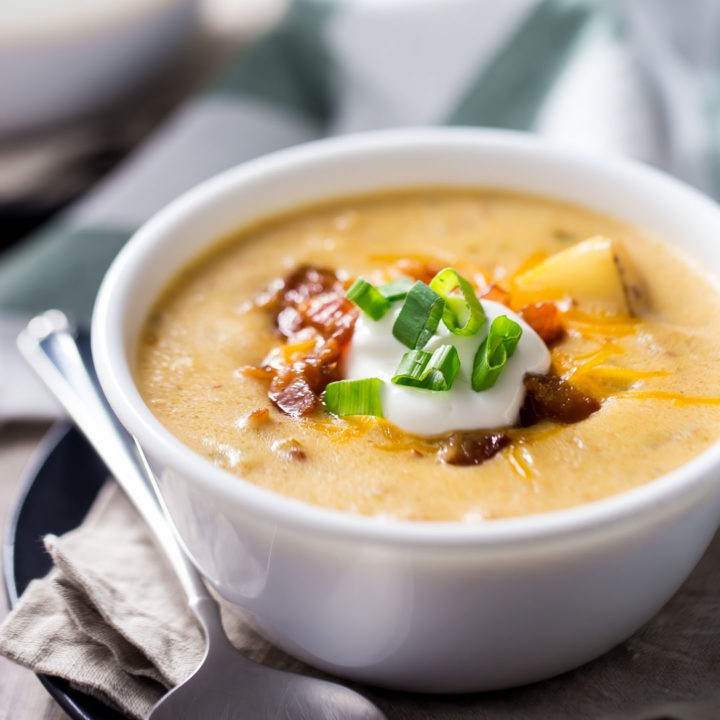 I’m so excited to have another week down. Next week I’m going on a tropical vacation, and the countdown is on!

I can’t wait to escape the winter weather. All this snow and ice gets me down. But you know what really helps? SOUP!

Soup is my go-to in the wintertime. I love those one-pot meals, and there’s something so comforting about a big pot of soup, steaming away on the stove!

I’ve been sharing some of my top favorites throughout January and February. Broccoli cheese soup, chili, and chicken pot pie always get smiles from everyone in my family. But this one here is my absolute fave. I love me some loaded baked potato soup!

It’s cheesy, creamy, thick and hearty, and there’s a hint of smokiness from the bacon. This soup is a meal in itself! 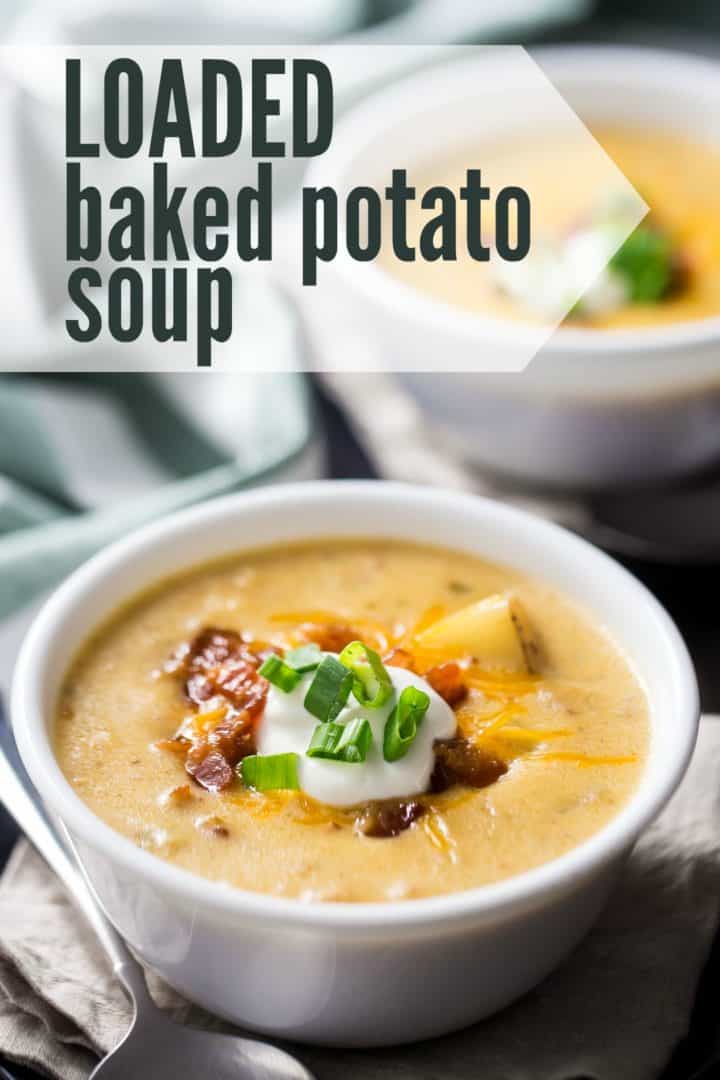 This recipe comes together quickly and simply, and everything happens in just one pot, so cleanup is a breeze.

Start by cooking bacon in a large, heavy-bottomed pot. You can cook whole strips and then crumble the cooked bacon, or do like I did and chop the bacon into 1/2-inch strips first.

Once the bacon is crispy and all the fat has rendered out, scoop it out of the pot with a slotted spoon and drain it on paper towels.

Next, add in the potatoes, letting them cook in the smoky bacon fat. Then stir in the scallions, and pour in the chicken stock.

Allow everything to come to a simmer, and when the potatoes have softened up, turn the heat way down low and stir in the cream.

At this point, you can hit it with a stick blender, if you like a thicker soup. Give it a little bit of a puree, but be sure to keep some bigger chunks of potato too, for texture.

Now it’s time for the cheese! This is the best part, in my opinion. I like to use an extra-sharp cheddar cheese, because it gives the CHEESIEST flavor. Add it to the pot, a handful at a time, stirring after each addition until the cheese is completely melted in. YUM!

Just before serving, add the cooked bacon back in and whisk in the sour cream. This gives a creamy, slightly tangy flavor that’s so unmistakably “baked potato.”

You can keep this soup warm on the stove for hours, but just be careful not to let it simmer or boil. It should be hot and steamy, but if it bubbles it can cause a grainy texture.

CAN LOADED BAKED POTATO SOUP BE MADE IN A CROCKPOT?

This recipe works really well in a crock pot or slow cooker. You just have to pre-cook the bacon, but other than that, all the other steps are pretty much the same.

Again, just keep the heat low so it doesn’t get gritty! 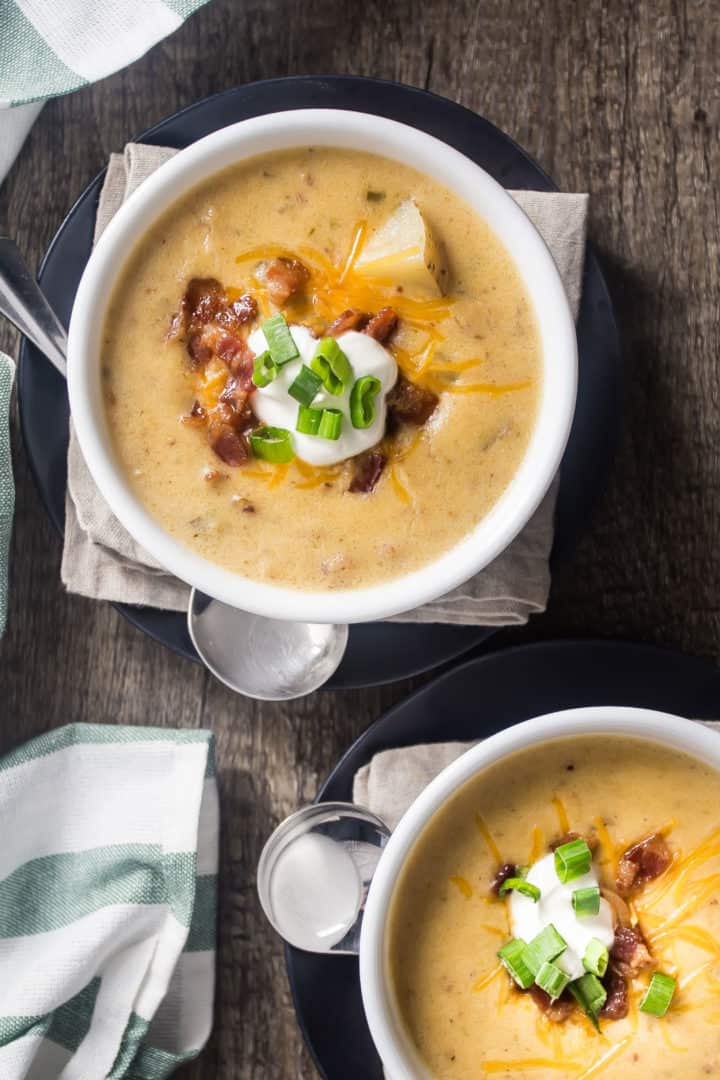 WHAT TO SERVE WITH LOADED BAKED POTATO SOUP

This soup is fantastic with just a side of freshly baked bread. My top choice would definitely be these homemade crescent rolls, but I think a nice crusty baguette would be good too, or if you’re short on time, a few buttermilk biscuits.

A light salad is another great option! I especially love arugula or baby kale, with a squeeze of lemon, a drizzle of olive oil, and a little salt and pepper. So refreshing, and such a nice contrast to the heartiness of this soup.

Once your leftovers have cooled completely, transfer them to an airtight container and pop them in the fridge. They should last there for around a week.

Reheat s-l-o-w-l-y in the microwave or on the stove. Use a very low heat and stir often. If it gets too hot too fast, you could end up with an unpleasant grainy texture. Low and slow is the way to go!

I honestly would advise against freezing this particular soup. In my experience, the smooth, creamy texture just doesn’t hold up well after freezing and thawing. 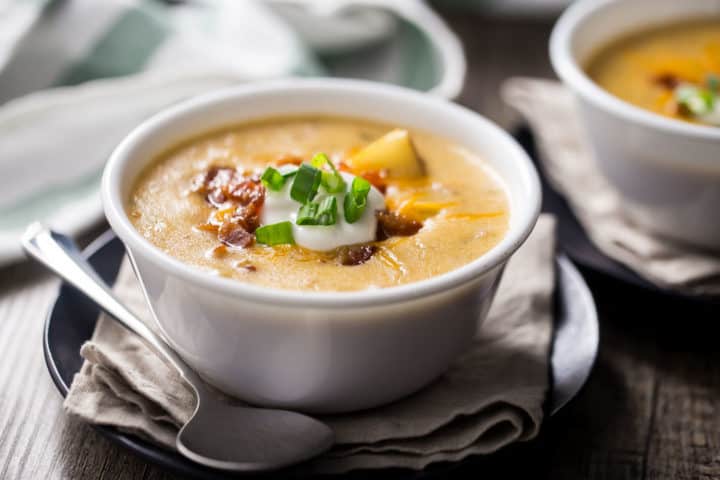 Has winter got you down too? Need something hearty and comforting? Try this baked potato soup! It will warm you right up! 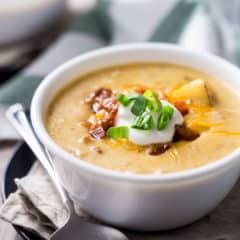