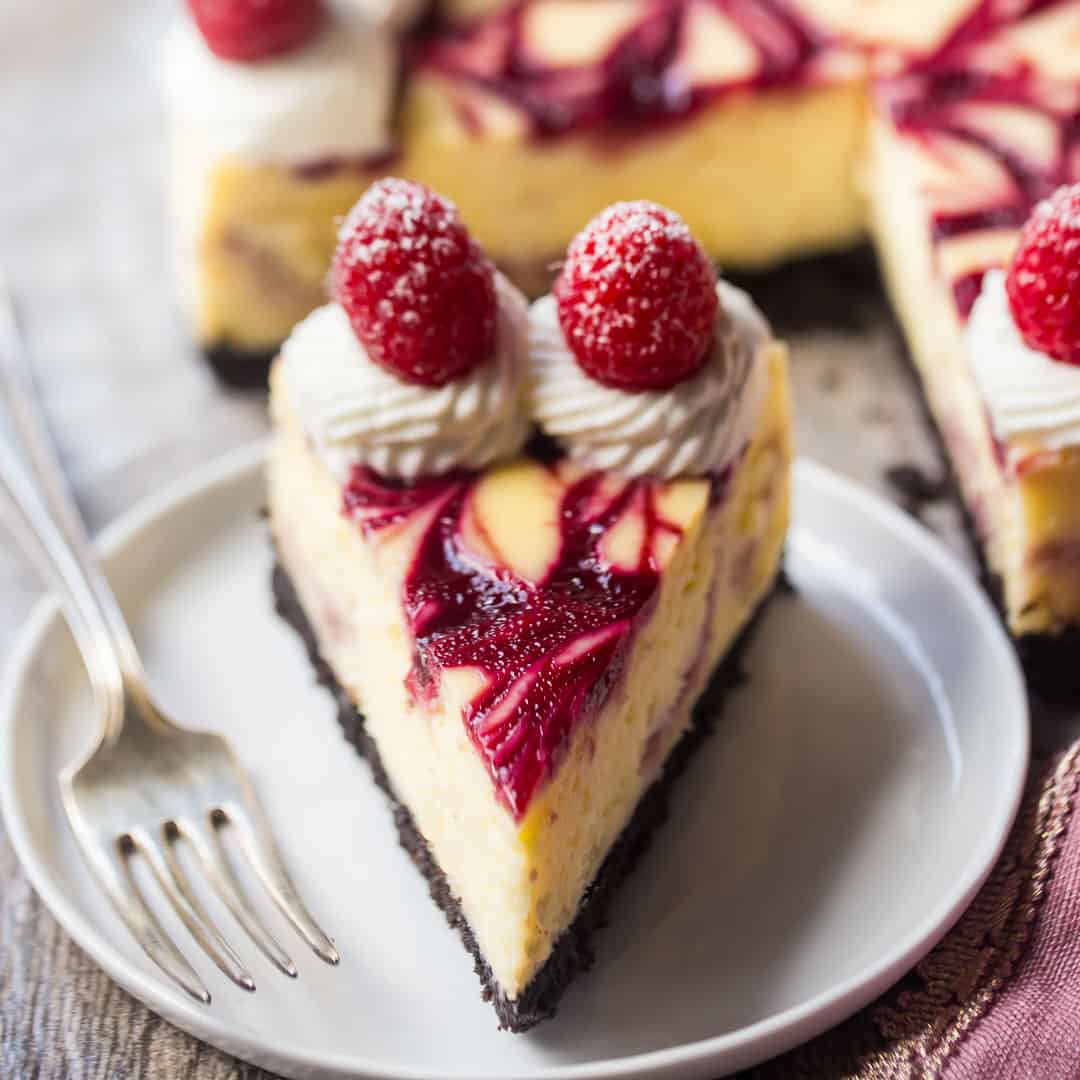 Oh my goodness, this one is a winner my friend!

I am telling you- this really works. And I know my stuff.

I’ve got plenty of cheesecake recipes to prove it. Check out this pumpkin chocolate swirl cheesecake if you don’t believe me. Or this Oreo cheesecake! Or this easy no-bake cheesecake.

Cheesecake is one of my most favoritest things in all the land, and this white chocolate raspberry cheesecake *might* be my best one yet!

The creamy, New York cheesecake filling is infused with the unmistakable richness of white chocolate.

The raspberry swirl is a gorgeous, ruby-red color, and not only that, it’s fruity and a little tangy, providing the perfect counterpoint to the sweetness of the white chocolate.

And then the Oreo crust chimes in with a great crunch and hit of dark chocolate flavor.

My friend is having a backyard Labor Day bash in a few weeks. She LOVED the last time I made cheesecake, so this one is definitely coming to the party! I can’t wait to share it there, and I bet your friends and family will love it too! 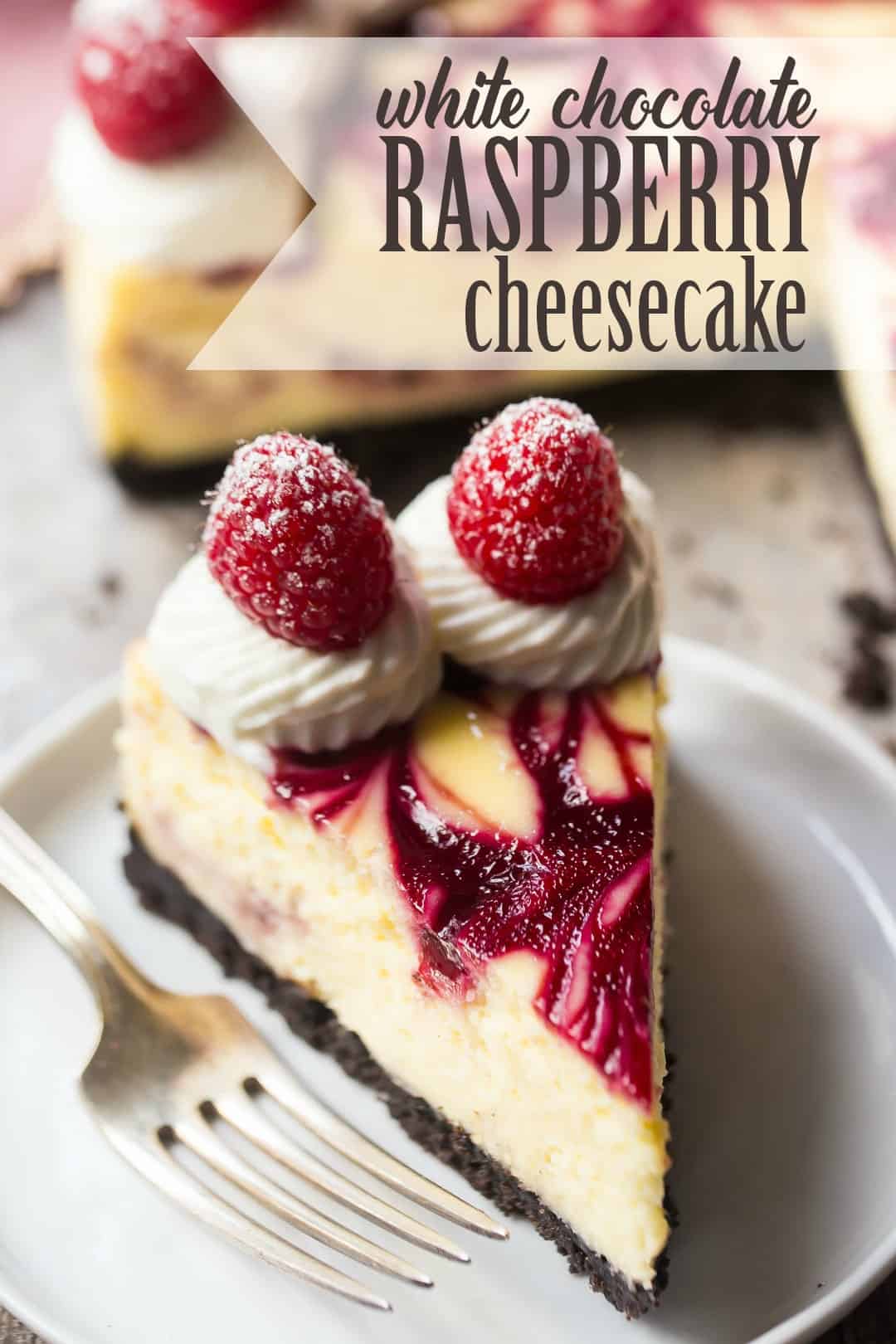 And it’s also got some pretty garnishes. Those are optional, but I do think they make for an extra-eye-catching presentation!

You can find the recipe for the Oreo crust here: Oreo Pie Crust. It takes 5 minutes or less and only has 2 ingredients.

Just press it into an even layer in the bottom of a greased 8-inch diameter cake pan. (I know this is a little unusual; don’t worry I’ll talk more about the pan later in the post!)

Start the filling by placing the cream cheese, sugar, and salt in a large mixing bowl. 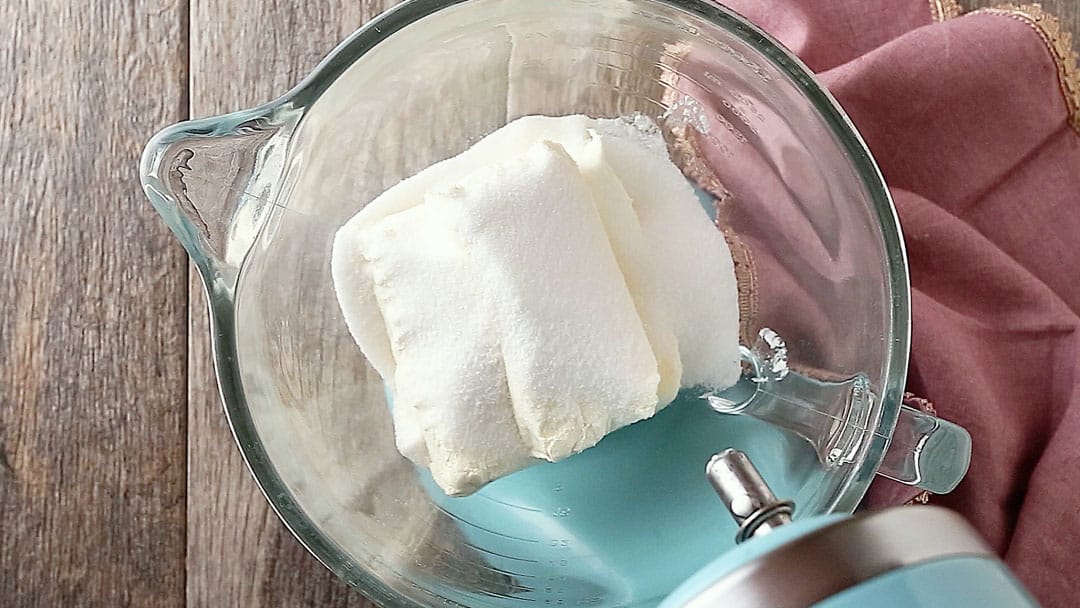 Beat these together until smooth. 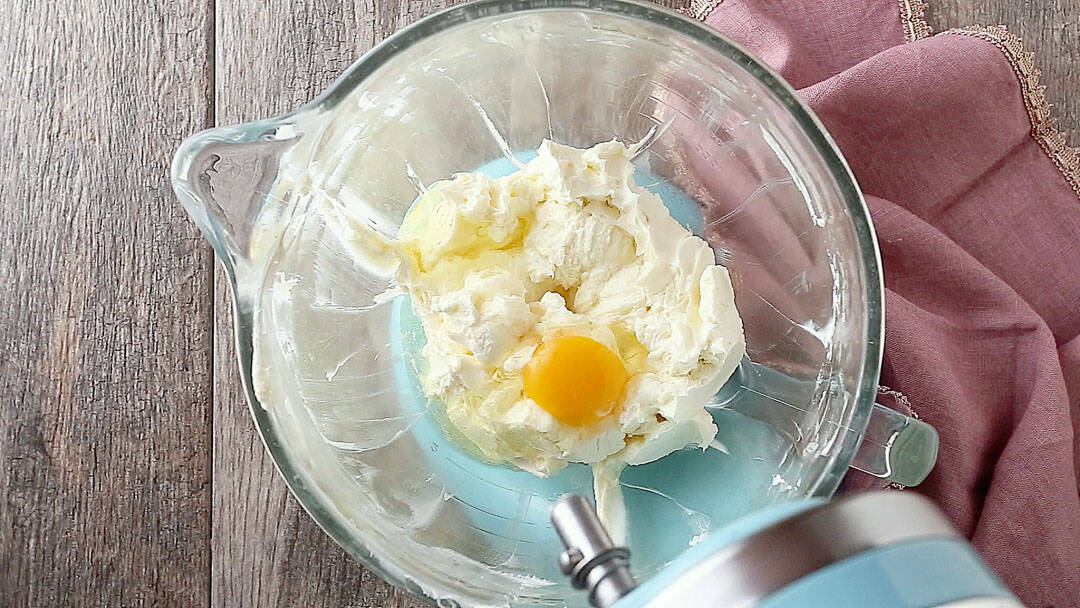 Then scrape the bottom and sides of the bowl with a silicone spatula, and add the first egg.

It’s really important that you add the eggs one at a time, scraping after each addition. This will prevent lumps!

Once all the eggs have gone in, add the yolks, cream, vanilla, and melted white chocolate. 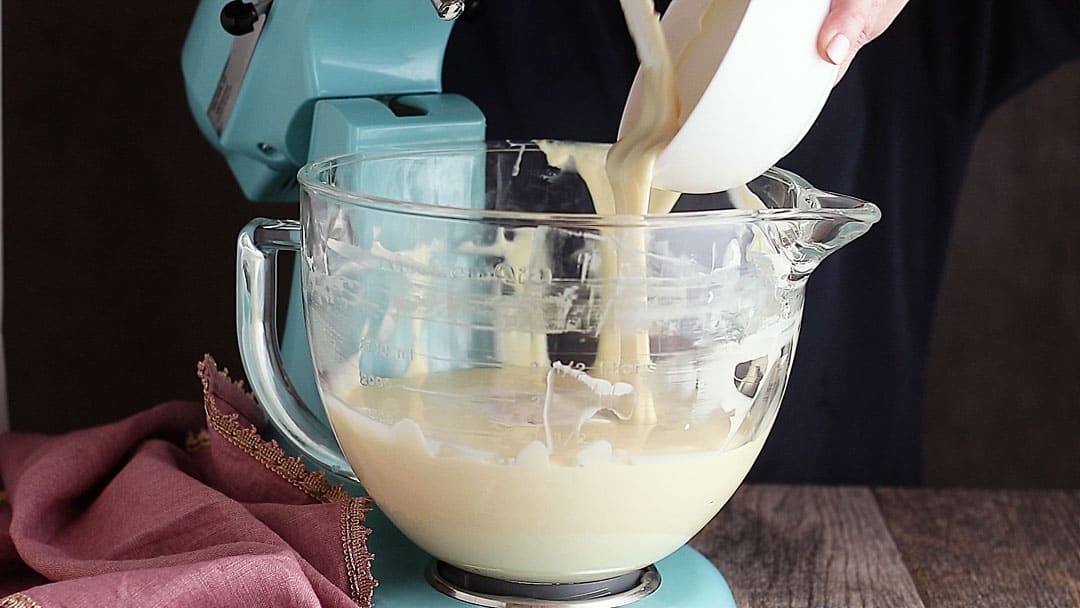 I like to use white chocolate bars for melting, rather than chips because chips often contain stabilizers that will prevent them from melting smoothly.

Just break the bars into small pieces and microwave in 20-second intervals, stirring.

Or you could use a double boiler. 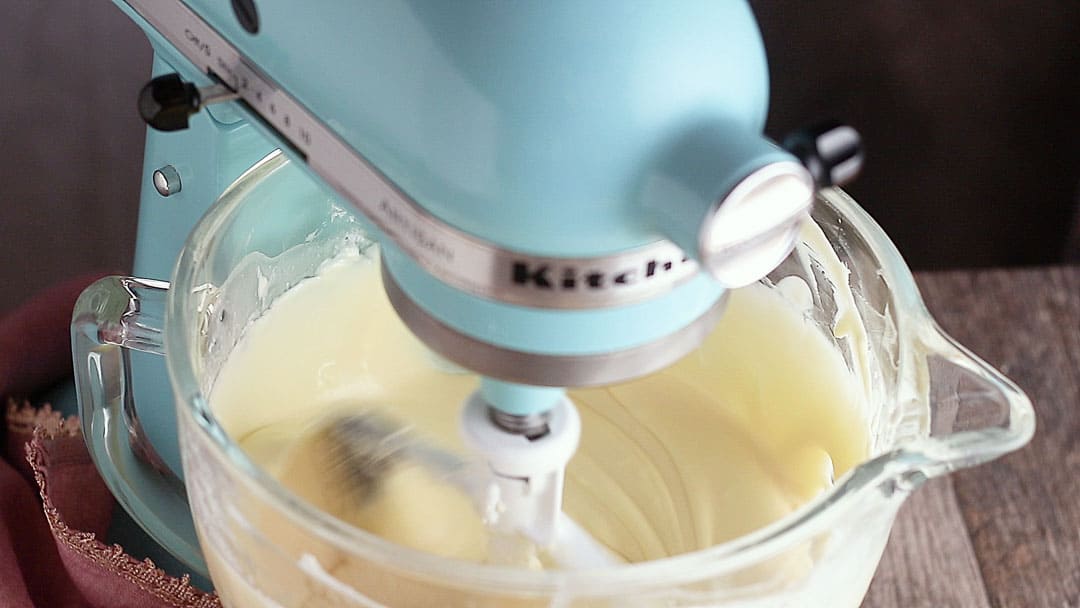 Stir the batter just until everything is combined, then pour it over the prepared crust. 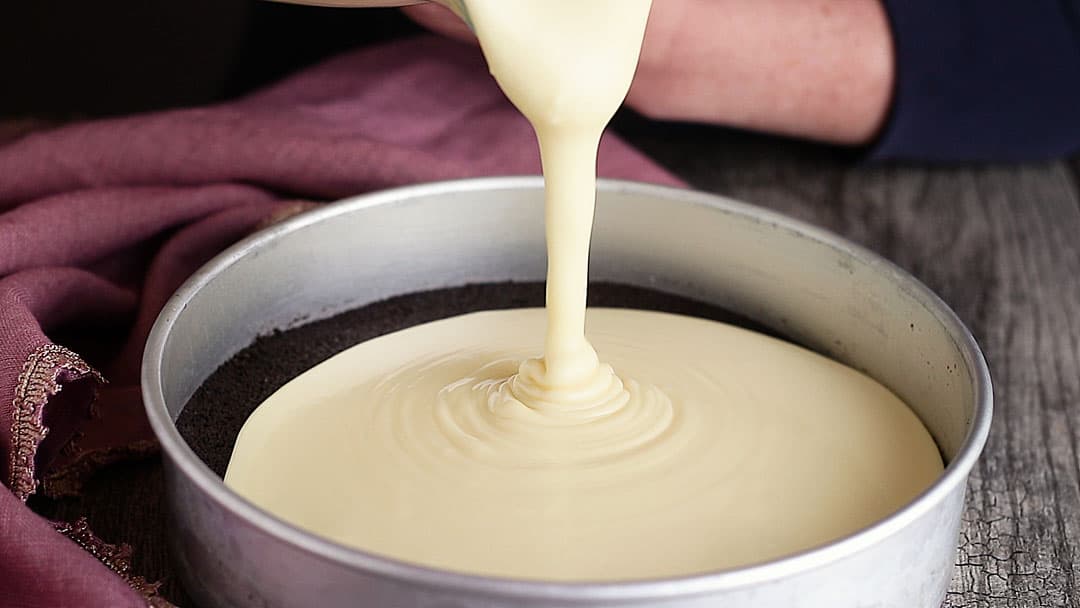 Doesn’t that look so tempting?? Just wait, it gets even better.

To create the swirl, we are just using some of that raspberry sauce I posted last week: Raspberry Sauce. 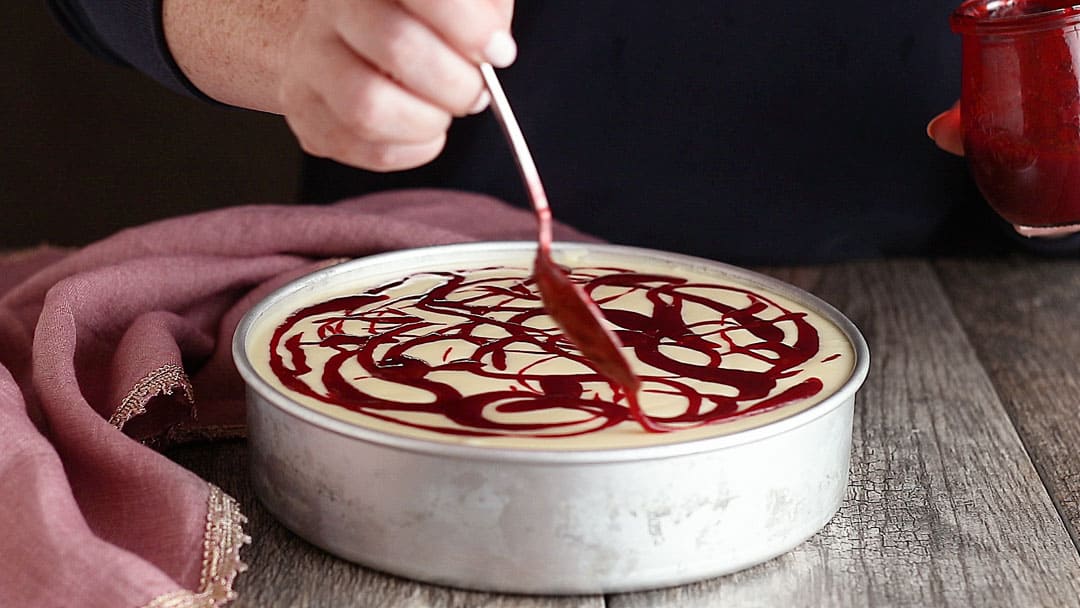 Drizzle the sauce in a random pattern all over the top of the cheesecake.

You could also put a layer of it halfway in the middle of the cheesecake, for an extra hit of berry flave. This is what I did- although you can’t really see it in the pics, it is there, and it is absolutely delish. 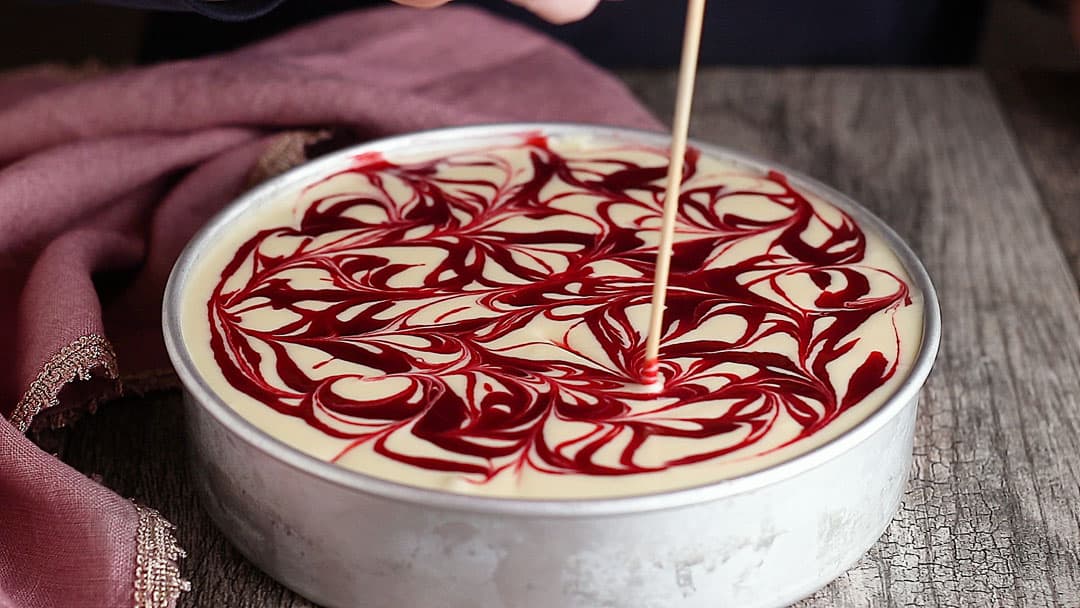 Next just swirl the sauce into a pretty pattern. I like to use a bamboo skewer for this, but you could also just use a toothpick or the tip of a sharp knife. 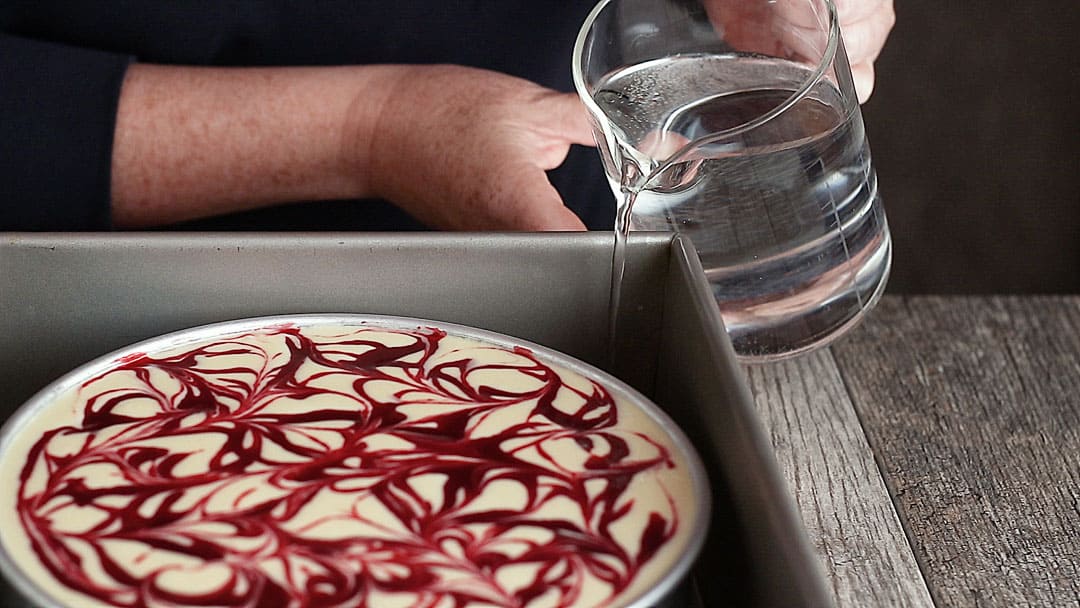 This cheesecake gets baked in a water bath, which is great for preventing cracks and ensuring a really smooth, creamy texture.

Place the cheesecake into a larger baking dish, pour water all around until it comes about halfway up the sides of the pan, and bake!

These are totally optional, but they sure make this cheesecake look dazzling!

Pipe swirls of softly whipped cream around the edge of the cake, then add fresh raspberries and a flurry of powdered sugar. Gorgeous!

You might be wondering why I recommend baking this in a regular cake pan, when most cheesecake recipes call for a springform pan.

Well, I have just never had any luck with those. Even when wrapped in foil, they always, ALWAYS leak.

Not to mention that I’ve lost more springform pan bottoms than I care to admit. 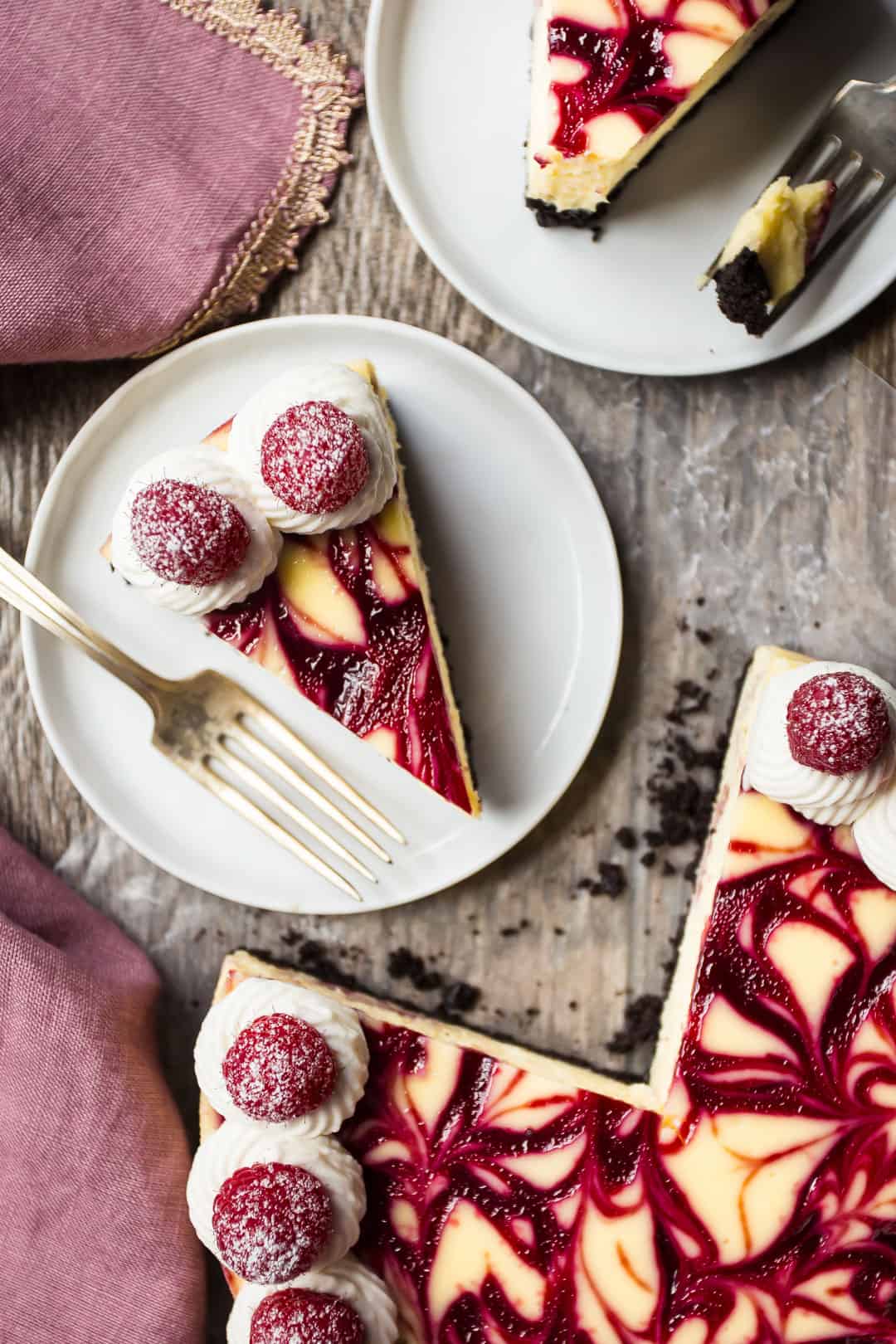 Nothing is worse than a soggy crust, so back in my pastry chef days, I did some experimenting and found that regular cake pans work beautifully for cheesecakes. As long as they’re greased well and lined with parchment, the cheesecake will slip out just fine.

I’ve done it this way ever since.

HOW TO GET IT OUT OF THE PAN

The most important thing is to make sure the cheesecake is well-chilled. I usually give it overnight in the fridge, but 4 hours would probably be enough. Just make sure it’s really, really firm.

Soak a kitchen towel in hot water and wrap it around the bottom of the pan for a few minutes, just to warm the pan in case the butter/grease is congealed.

It’s also a good idea to run the tip of a sharp knife around the edge of the cheesecake, to loosen the sides.

Then top the pan with a plate or a cardboard cake round, and flip it over to release the cheesecake. You might need to give it a little shimmy-shake.

Once it’s out, put your serving platter on top and flip it back around. Tah-dah!

CAN THIS WHITE CHOCOLATE RASPBERRY CHEESECAKE BE MADE AHEAD?

I always recommend making cheesecake ahead. It takes a long time to bake, and even longer to chill and firm up completely.

It’s a good idea to make it the day before you plan to serve it, but it will hold up just fine in the fridge for a few days.

If you have any leftovers, wrap them tightly in plastic wrap and stash them in the fridge. They will keep for around a week. 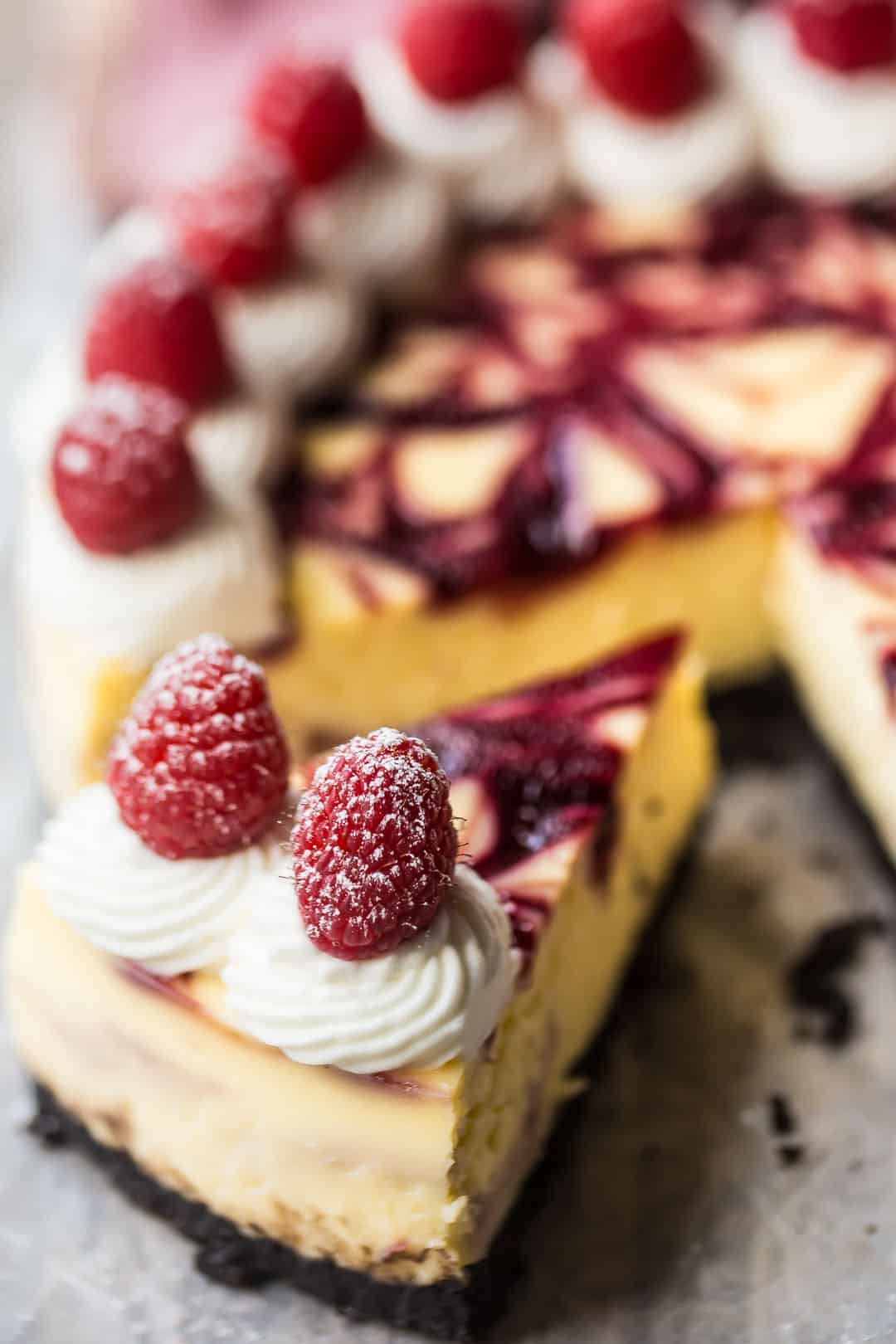 Cheesecakes freeze beautifully. Just wrap this tightly in plastic wrap, and it should last for at least 2 months in the freezer.

Allow it to thaw in the fridge before serving. 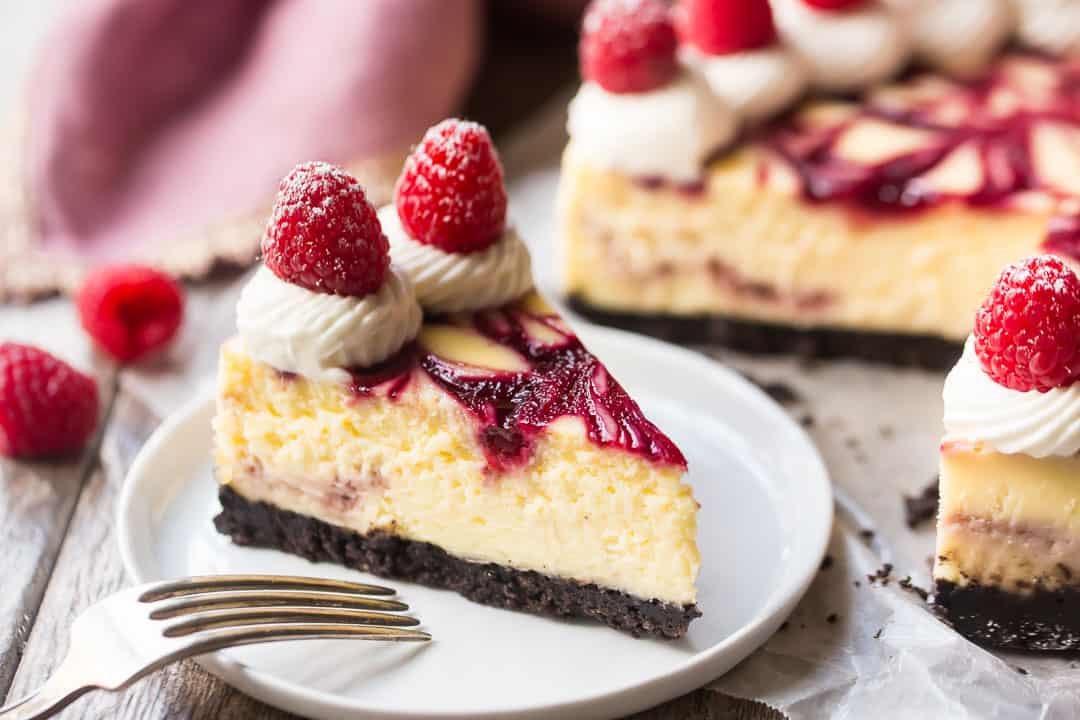 A few more of my favorite raspberry recipes: 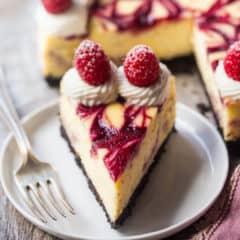 *This recipe can also be baked as bars; use an 9x9-inch square baking pan.