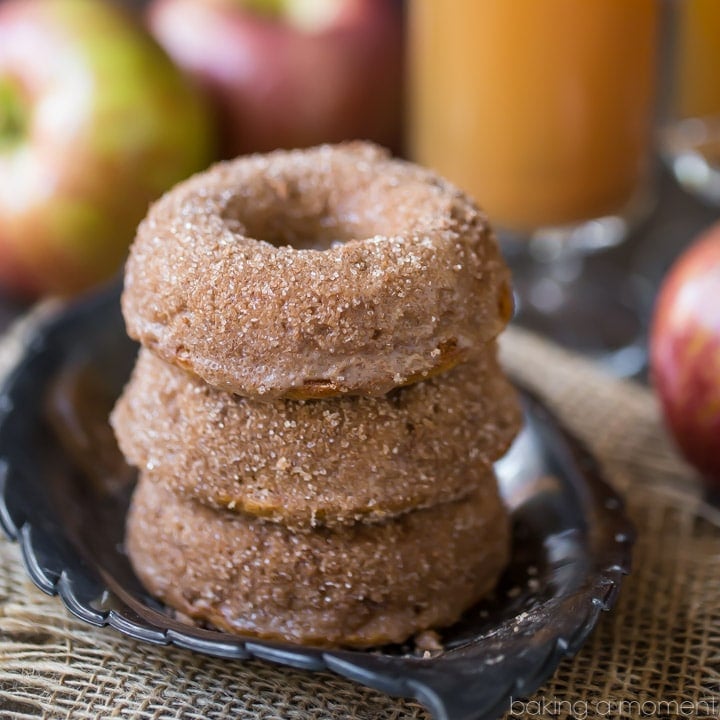 Is it starting to feel like fall yet for you?  Here in the northeast, the temps have been quite brisk in the mornings and evenings.  You can smell that hint of wood smoke in the air, and the leaves are just beginning to turn.  All this can only mean one thing: cider donuts! 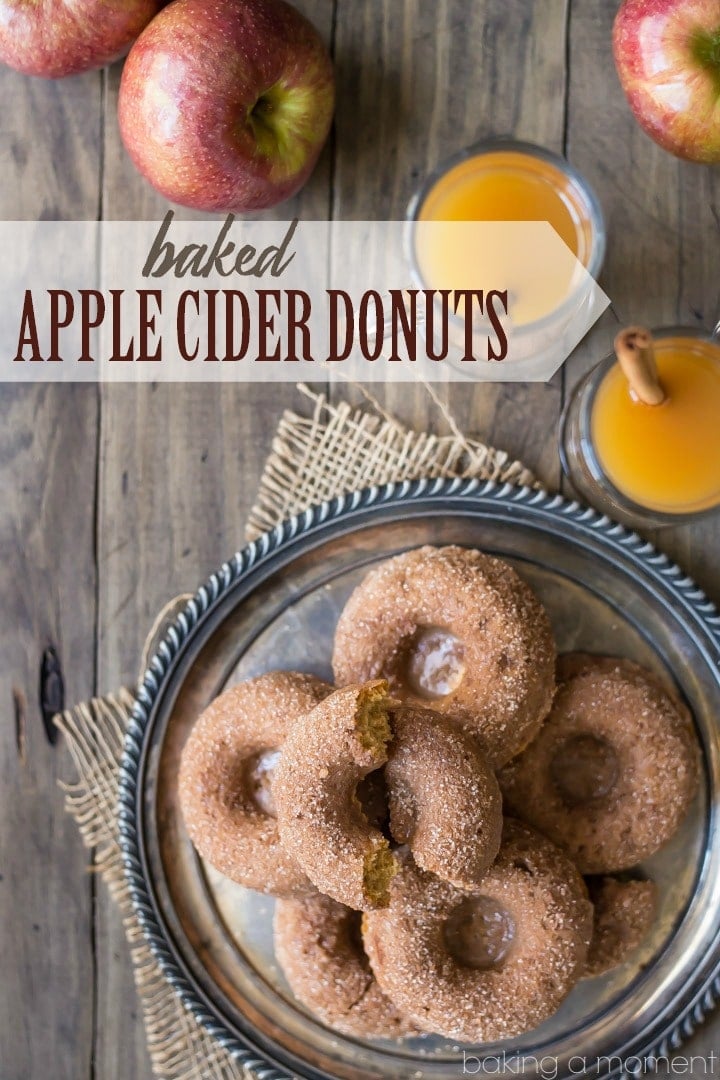 It’s so much fun to take a trip to a local farm, go on a hayride, pick out pumpkins, and eat cider donuts.  It’s become a fall tradition for my family and so many others.

Donuts are notorious for being a pain to make.  Most of us don’t want to have to fuss around with a big heavy pot of boiling hot oil.  That’s why I love my donut pan.  It makes homemade donuts so quick and painless. 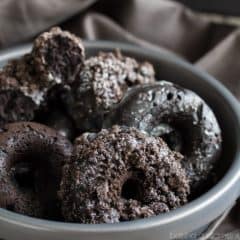 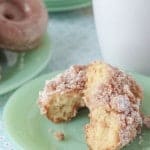 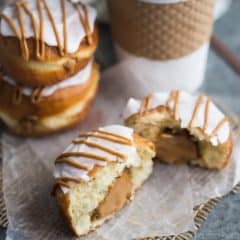 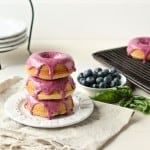 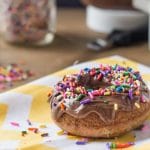 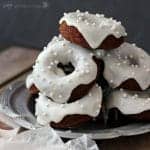 The only down side is, sometimes you don’t get that crispy exterior.  I just love when a crispy exterior gives way to a soft, tender cake donut.  If I can’t have that, then I don’t really want baked apple cider donuts, to be honest.  So here we have a way around it.

After the baked apple cider donuts have cooled a bit, give them a dunk in a thin cinnamon cider glaze.  It reinforces all the flavors, as well as forms a little bit of a hard shell/crust on the outside of the donut.

Then, while the glaze is still sticky, coat them generously in cinnamon sugar.  I like to use sparkling sugar for this- the crystals are larger and crunchier and less likely to dissolve when they hit the wet glaze.  I can find it easily in my supermarket or craft store, and I try to keep it on hand at all times because it’s such a versatile ingredient.  If you have any trouble locating it, here’s a link to buy some online. 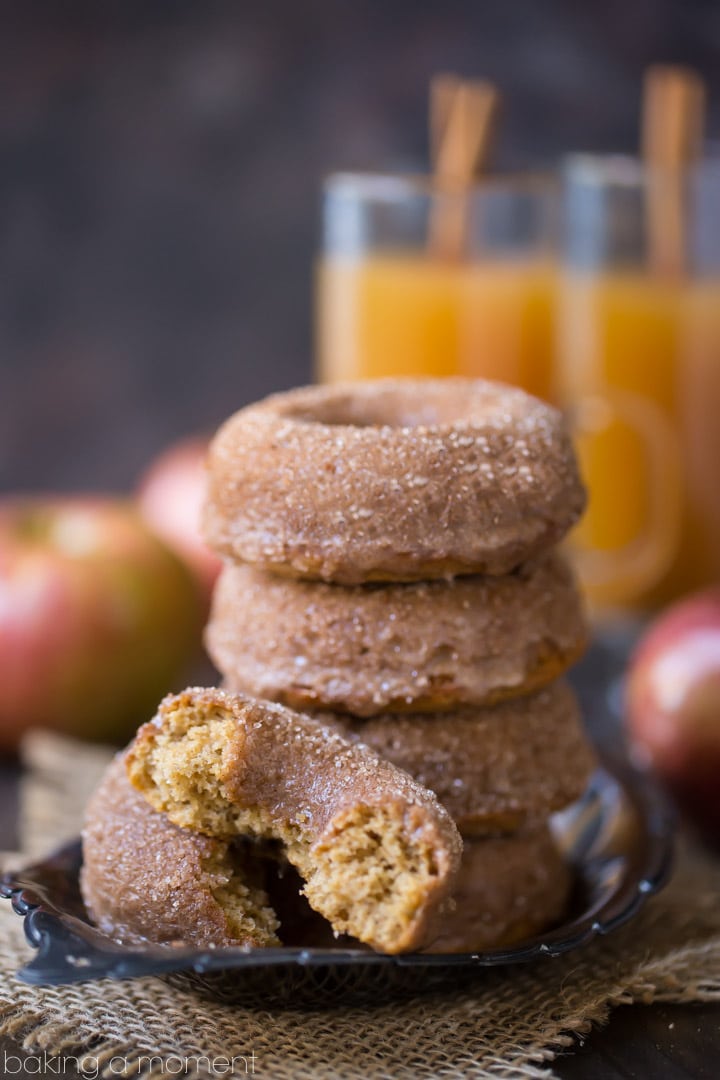 Another ingredient I really love for these baked apple cider donuts is boiled cider!  Have you seen it around?  I notice it every fall, in all the kitchen stores.  It looks like a thick, dark brown syrup.  Last year, King Arthur Flour was kind enough to send me a bottle and I just love it.  It imparts SO much apple flavor.  You can buy it here, or make your own by following this easy recipe.

I hope you’ll make it a tradition to mix up a batch of these baked apple cider donuts every year!  They’re quick and simple, so delicious, and perfect for fall! 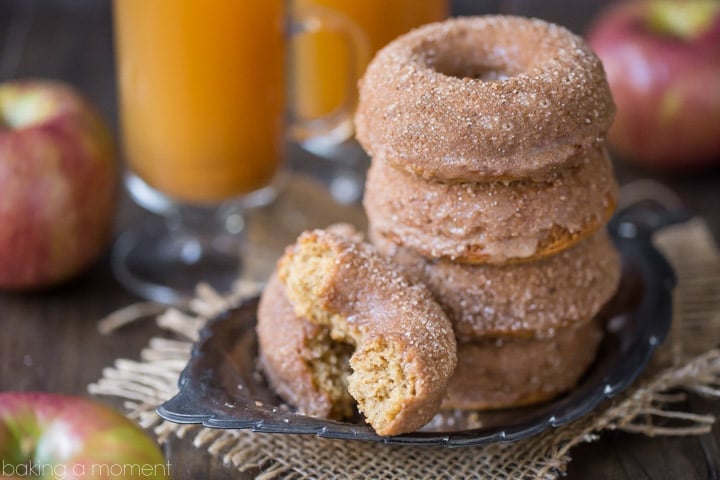 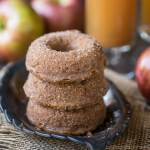