Make it easy on yourself with this make-ahead mashed potatoes recipe! So fluffy & buttery, and they can be made up to 2 days ahead! 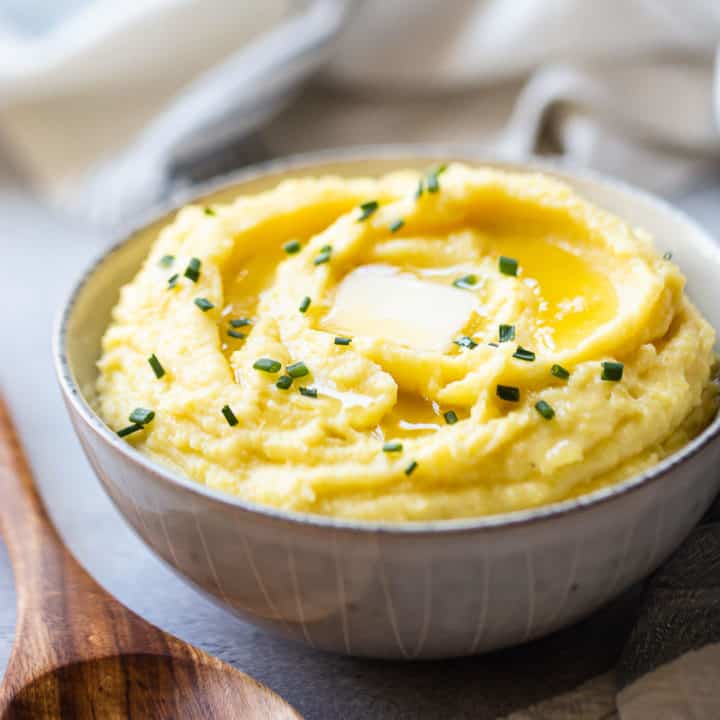 The Thanksgiving countdown is on!

Have you started planning your menu yet? I know mine will definitely include a few year-after-year favorites, like this Thanksgiving stuffing recipe, this homemade cranberry sauce, and this perfect apple pie (my nephew’s favorite!).

And as of last year, we have a new favorite: make-ahead mashed potatoes!

I know the idea of not serving mashed potatoes freshly made may sound a little crazy, but I promise you- it really works!

I was very dubious last year when I tried this method, but honestly, it blew me away. The mashed potatoes cook up so incredibly fluffy, velvety-smooth, and buttery tasting.

Never again will I stress myself out waiting until the last minute to make mashed potatoes! These keep for up to 2 days and reheat beautifully, without a trace of gumminess! 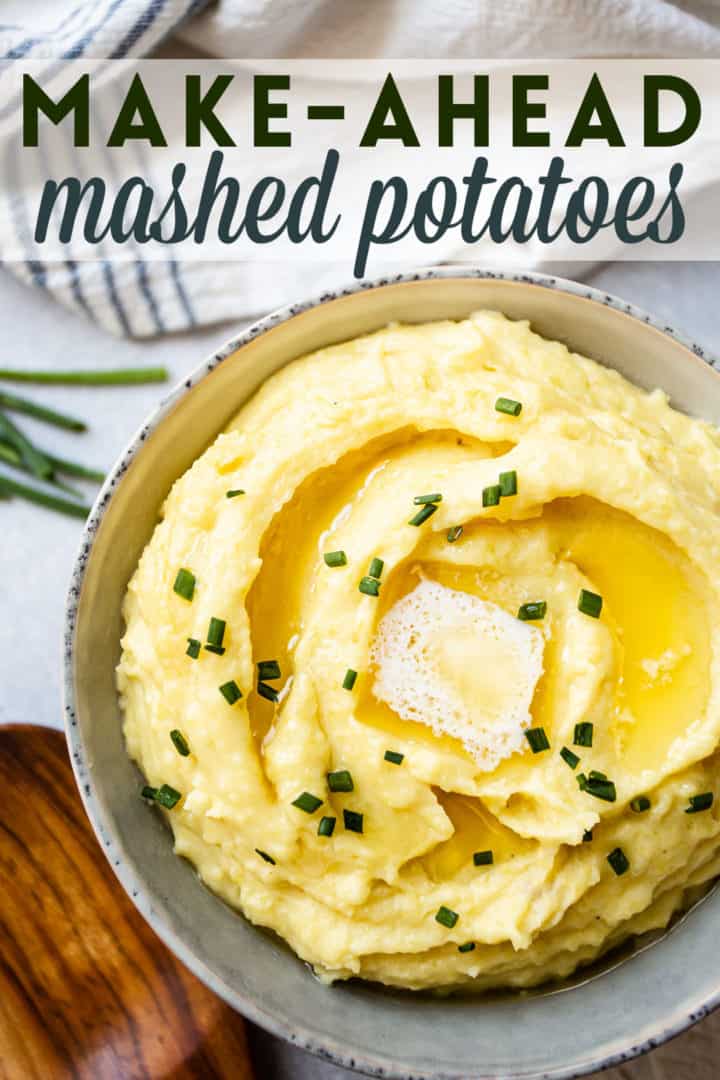 CAN MASHED POTATOES BE MADE AHEAD?

For the longest time, I would never even consider making mashed potatoes ahead of time. I was convinced that in order to have fluffy mashed potatoes, they would have to be made just before serving. I had seen first-hand how they stiffen and clump up as they sit, becoming heavy and leaden.

Then last year I was invited to a Thanksgiving dinner at a relative’s house. I asked them what I could bring and they said mashed potatoes.

What do I do? Do I tell them that mashed potatoes should never be made ahead? That would seem so rude!

So I started searching around and discovered a make-ahead mashed potato recipe on Bon Appetit. I gave it a try, and guess what? It worked! Brilliantly!

For the recipe you see here, I made a few tweaks to the original, to accommodate my own family’s personal tastes. It’s a little less runny and it contains a bit less fat (but still tastes so incredibly rich and flavorful!). I’ve also halved the recipe because we always end up with a ridiculous amount of leftovers, especially on Thanksgiving when there are so many other side dishes to sample. That said, feel free to double this recipe if you’re serving a really big crowd!

HOW TO MAKE THIS MASHED POTATO RECIPE

It’s all about the method with this recipe. Normal mashed potato recipes would clump up as they sit and become gummy and heavy, but because of this special technique, these stay velvety and light for days.

The most important thing to remember is to work quickly, so everything stays hot as it’s being mixed together. I’ll explain more as we move along through the steps!

Start by filling a large pot with cold water. Then add a handful of salt and slip in the potatoes. 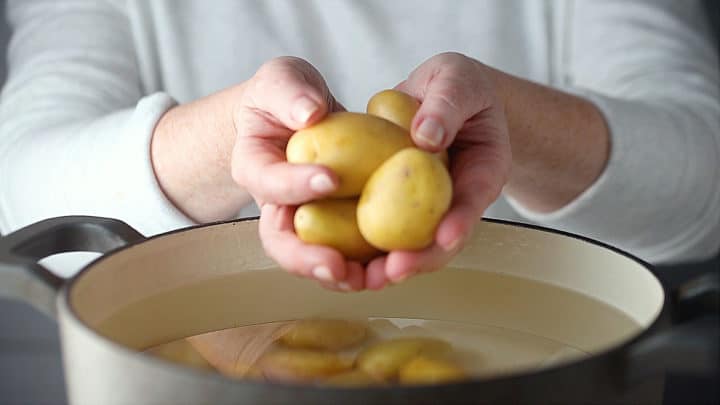 Make sure you’re using lots of water and plenty of salt! It should taste like seawater.

Place the pot over medium-high heat and allow it to come up to a simmer. 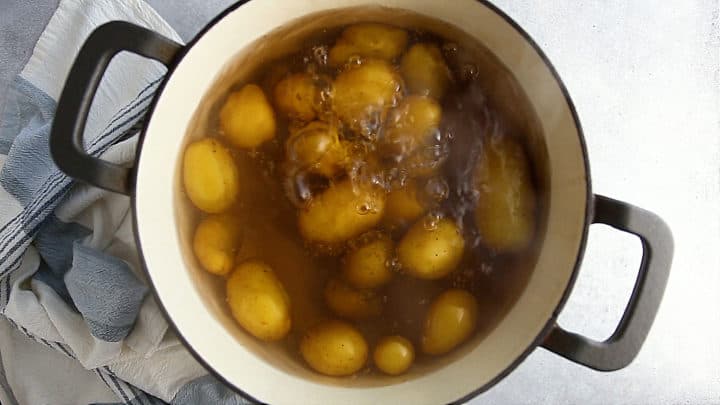 While that is going, pour milk and cream into a small pot and keep it warm over the lowest possible heat. 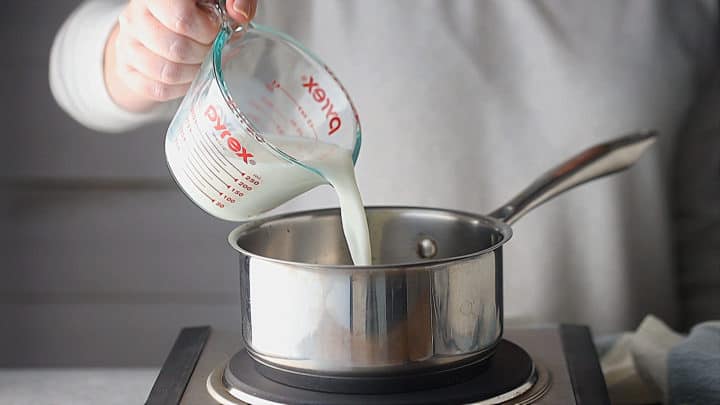 Cook the potatoes until the tip of a sharp knife slides in and out easily, without any resistance. They should be tender but not falling apart or crumbly. This typically takes about 30 to 40 minutes, depending on how big they are. 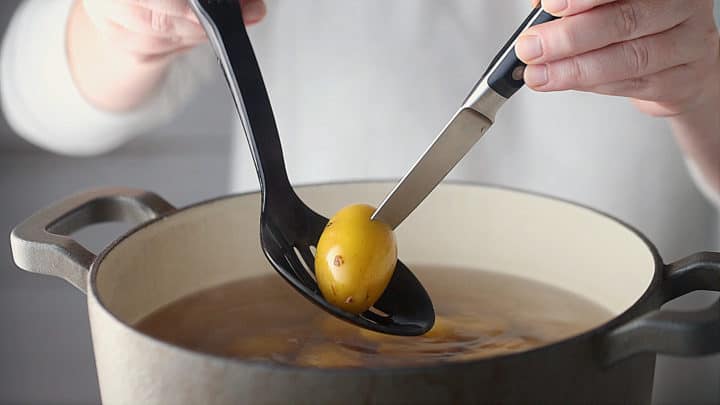 Drain the potatoes and return them to the heated pot to keep warm (off the heat).

Now this is key: pass them through a ricer. If you don’t have a ricer, I highly recommend you invest in one. They only cost about $20, and they will yield THE MOST light and fluffy mash you’ll ever taste. I promise you!! 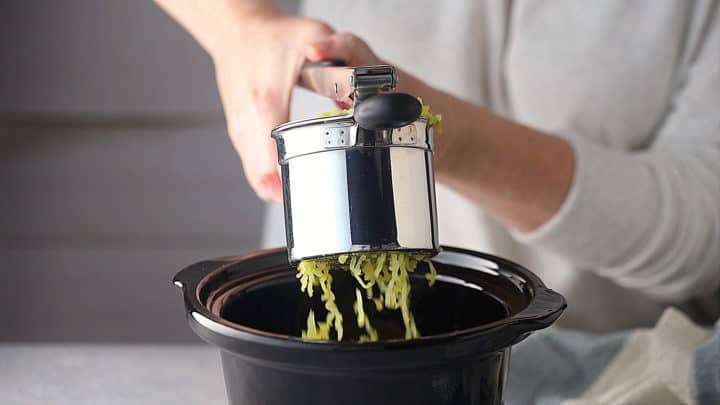 A ricer serves a 3 in 1 purpose: not only does it mash but it also aerates and removes the skins. Trust me, this is a must-have kitchen tool! Here’s a link to buy one, if you don’t already have: ricer.

Now here is another key: you don’t just want to rice all the potatoes at once. You want to alternate, a few potatoes, then a hunk of butter, then a few potatoes, and another hunk of butter. This way, the butter is stacked between layers of potato. The hot potatoes melt the butter, and every particle of potato gets coated in butterfat. This layer of fat sort of “seals” the potatoes from the liquid, preventing them from swelling up and becoming overly thick and gluey.

Once you’ve got all the potatoes and butter riced together, give it a toss to combine and make sure that every molecule of potato is coated with melted butter.

Then add the warm milk and cream mixture along with a little bit of sour cream. Season with salt and pepper. I like 1 1/2 to 2 teaspoons of kosher salt for this amount of potatoes, but feel free to tweak that to your own personal taste. 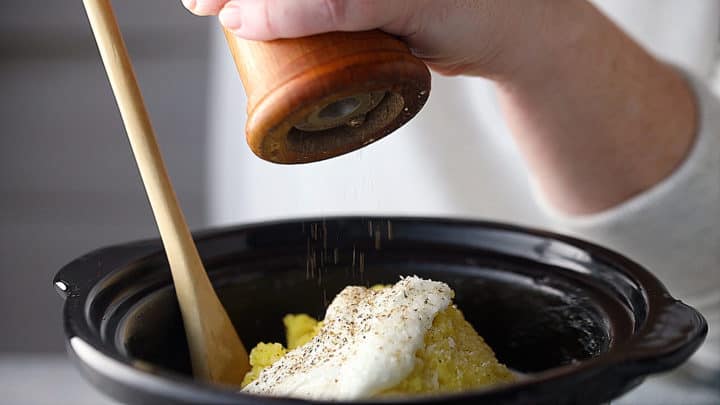 Stir it gently together until combined, and that’s your make-ahead mashed potatoes made! 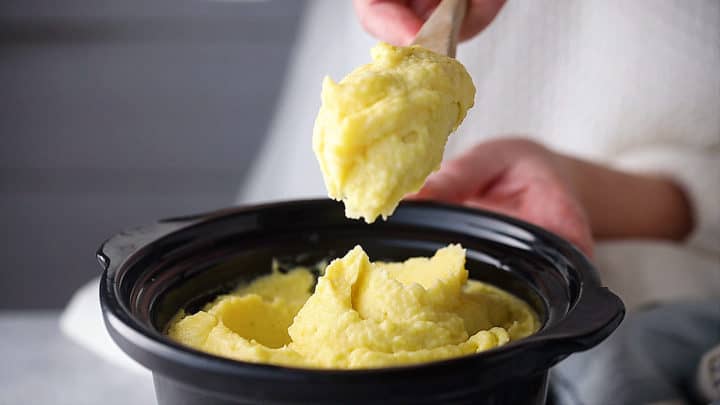 These can be kept in the fridge for up to 2 days, OR if you’re making them the morning of, you can just slip them into a crockpot (set to the lowest heat) and keep them warm until you’re ready to serve them.

WHAT KIND OF POTATOES TO USE

I used Yukon gold potatoes for what you see here. They have a pretty butter-yellow color, a rich taste, and a nice, glossy quality.

You could probably substitute another type of potato, such as red-skinned or russets, but I honestly haven’t tried that myself so I can’t say for sure how they would turn out. 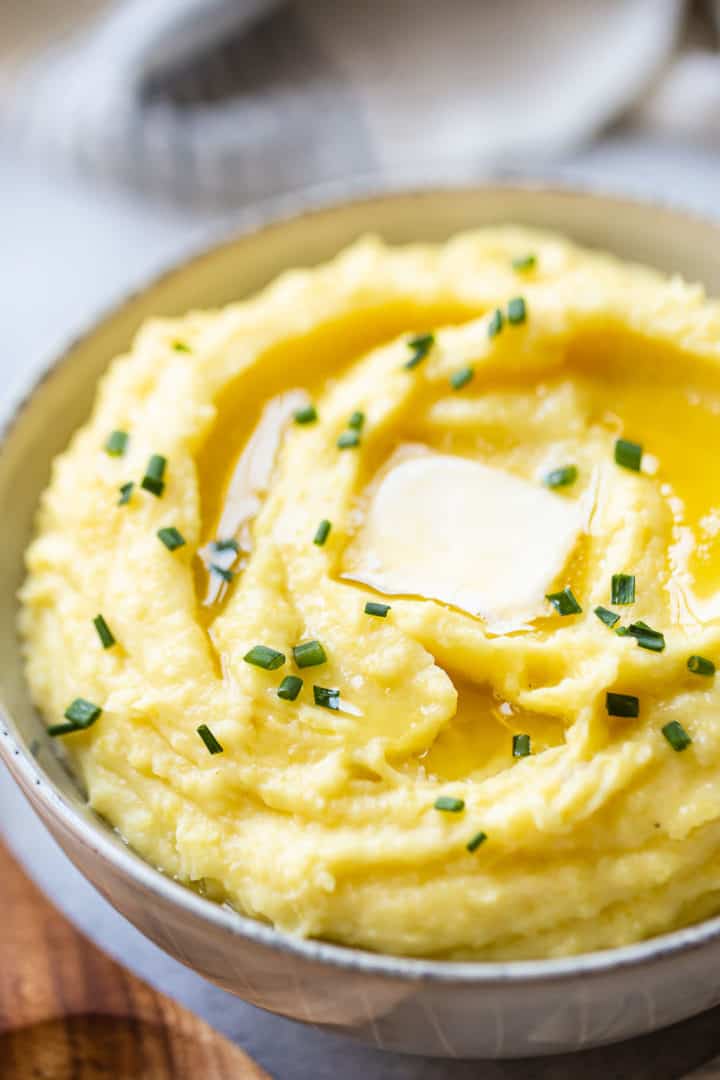 The most disappointing mashed potatoes tend to be:

I can assure you, you won’t have any of these issues with this recipe.

There are 2 reasons why:

Just be sure to boil the potatoes until tender, or else it will be really hard to pass them through the ricer and they could come out grainy. You also want to work quickly and get everything mixed together while still hot.

HOW LONG WILL THEY KEEP?

Keep these make-ahead mashed potatoes warm in the slow cooker for several hours, or refrigerat them for up to two days.

They also freeze very well. They’ll last in the freezer for several months. Thaw them in the fridge the day before you plan to serve them.

HOW TO REHEAT MASHED POTATOES

To reheat, place the make-ahead mashed potatoes in a large pot over medium-low heat. Warm them gently, stirring, until heated through.

You may need to add a little more milk and/or cream to thin them back out, as they do tend to become stiffer as they sit. 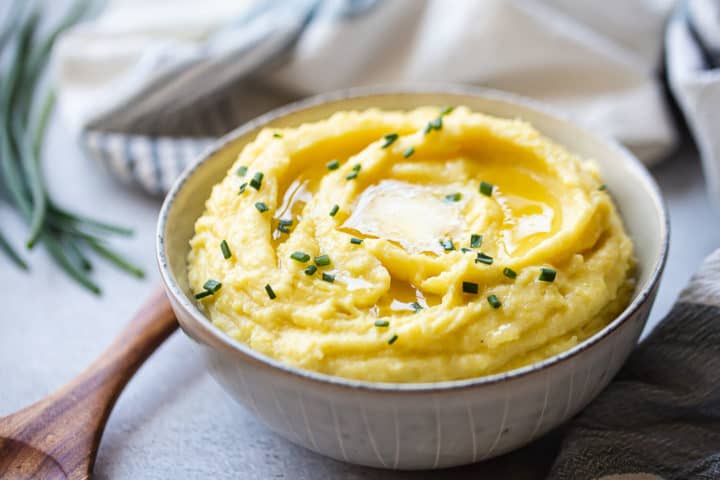 A FEW MORE OF MY FAVORITE THANKSGIVING RECIPES: 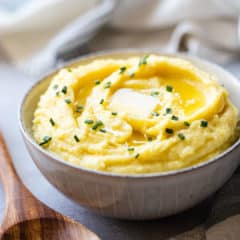 Make it easy on yourself, and try this make-ahead mashed potatoes recipe! So fluffy & buttery, and they can be made up to 2 days ahead!