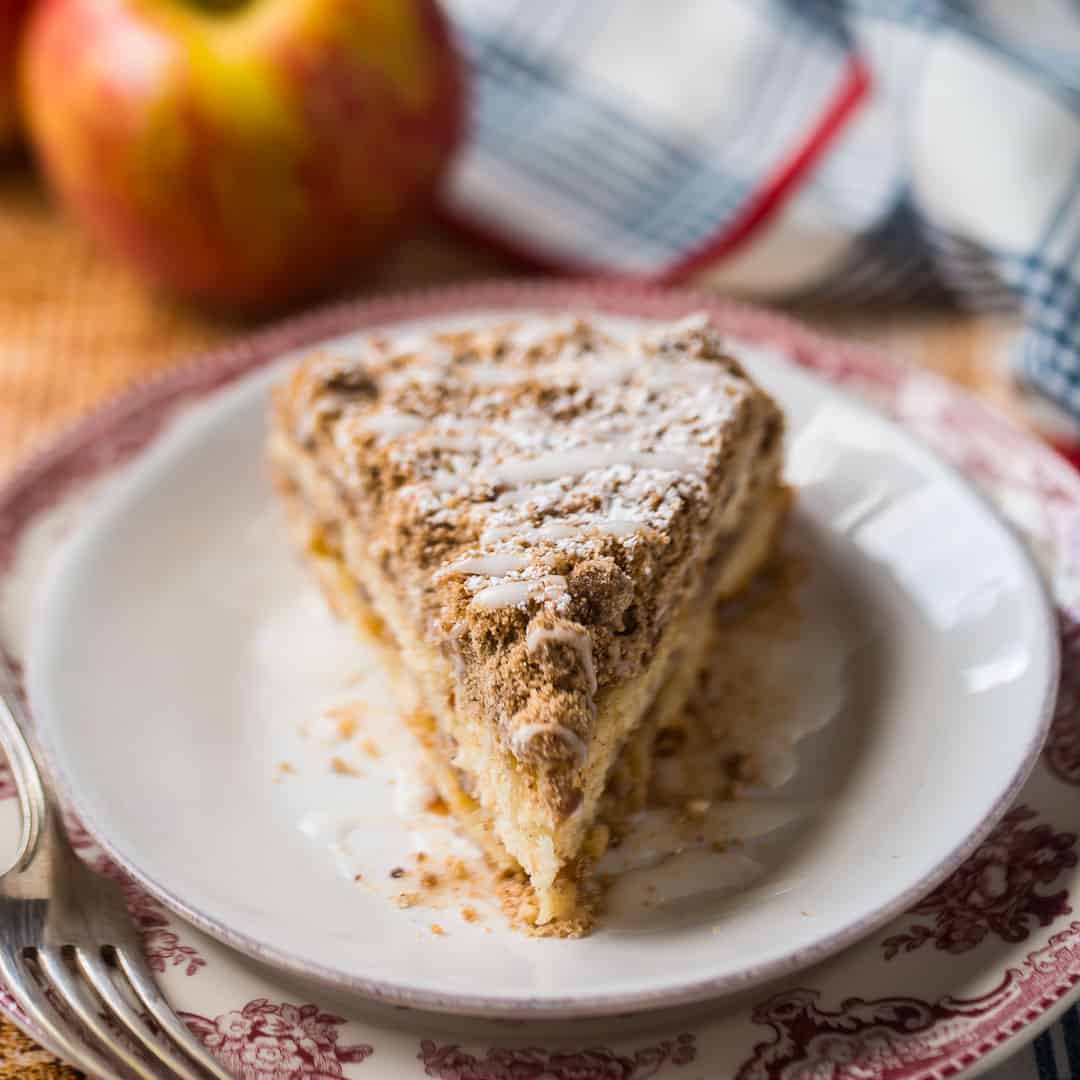 Around here, the temperatures are starting to cool off, and I’m even starting to see some leaves changing!

And at this time of year, I always like to share at least a few great make-ahead breakfast recipes. Whether it’s a steamy dish of baked French toast casserole, a slice of cheesy quiche Lorraine, or a couple of grab and go banana muffins, I feel so much better when I know my kids have had a nice breakfast before they head off to school!

Today’s recipe is one of my older son’s absolute favorites. He’s a huge fan of anything apple and cinnamon, so this apple coffee cake is right up his alley!

It’s a moist sour cream coffee cake, layered with fresh apples and a crumbly, buttery cinnamon streusel, and I think you’re going to love it just as much as he does! There’s tons of fall flavor in every luscious bite! 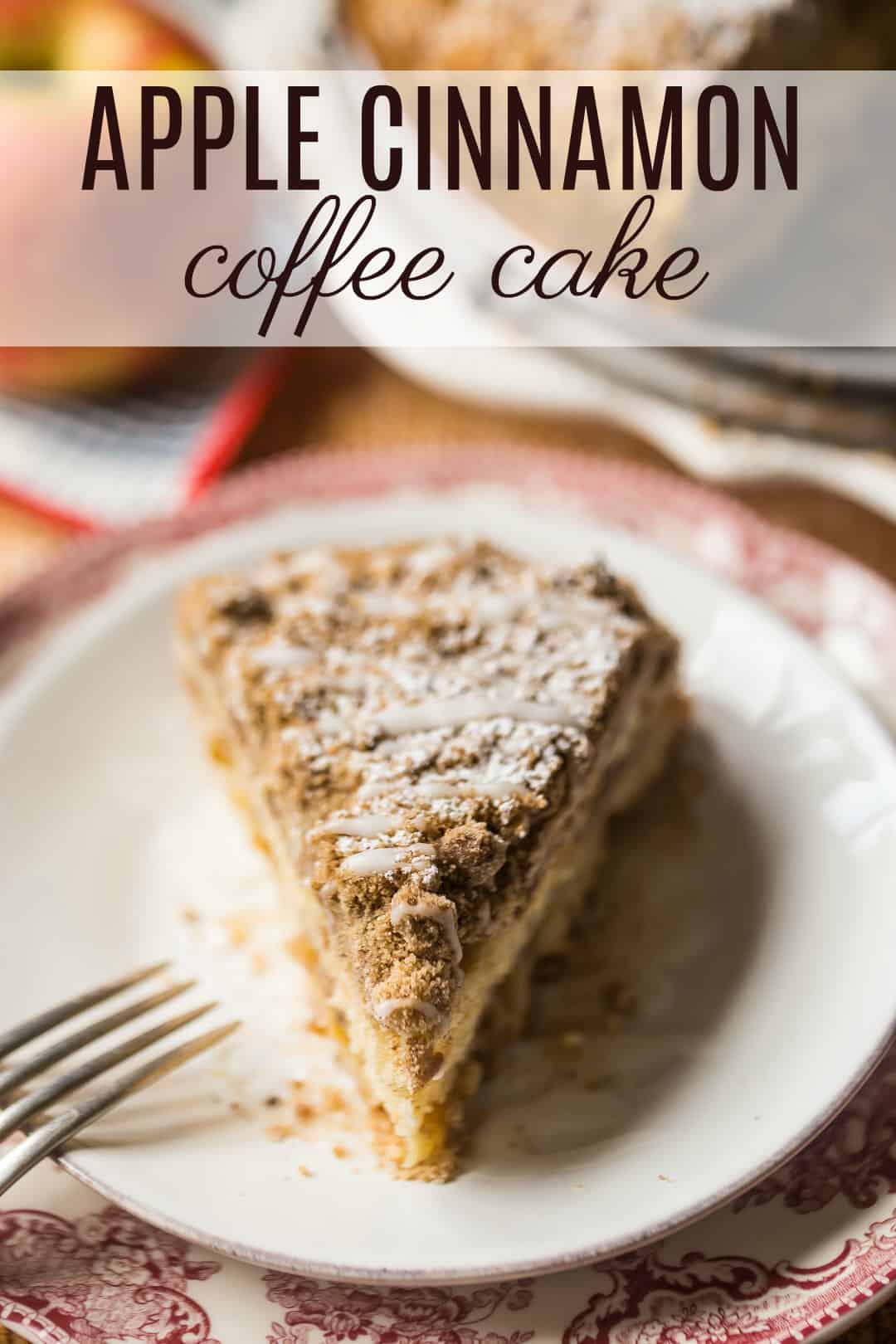 HOW TO MAKE APPLE COFFEE CAKE

This recipe consists of 3 main components: the cinnamon crumb mixture, the apple sour cream coffee cake, and the pretty garnishes.

Start by melting the butter, then just stir in the other ingredients with a fork. 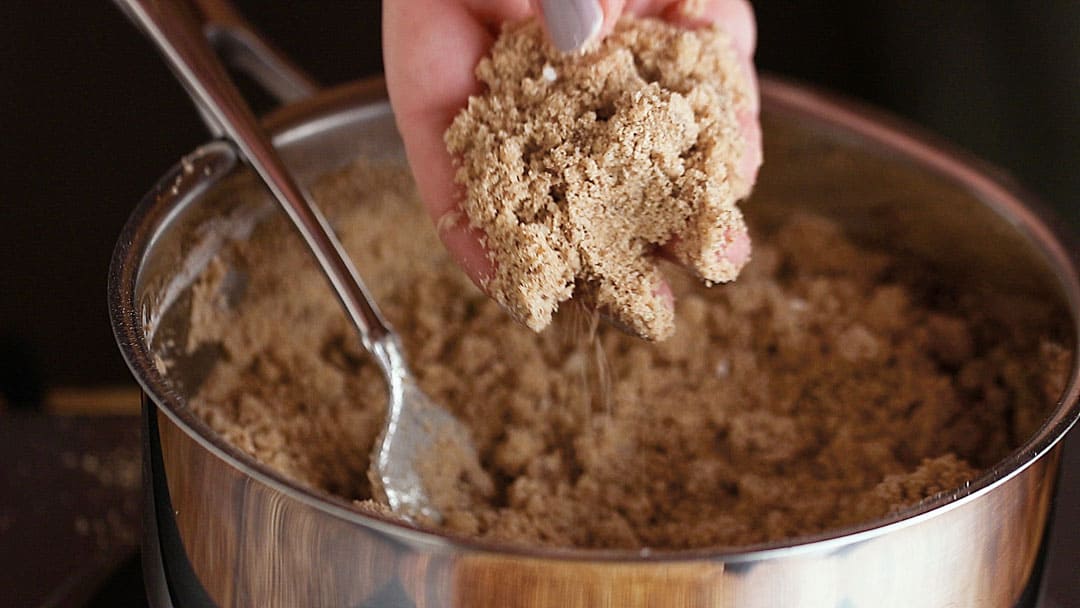 The mixture will look really crumbly. If you need more info on how to make this crumb topping, click here: Basic Streusel Recipe.

Set this aside while you get going on the cake.

This coffee cake is super-easy to make, and it all happens in just one bowl.

As well as a couple of fresh apples that have been peeled, cored and diced.

My favorite kind of apple to bake with is the Granny Smith, but this time I used Honeycrisps, and it came out fantastic! Use any kind of firm apple that’s good for baking.

Start by placing the flour, sugar, baking powder, baking soda, and salt in a large mixing bowl. Give these dry ingredients a quick stir to combine them. 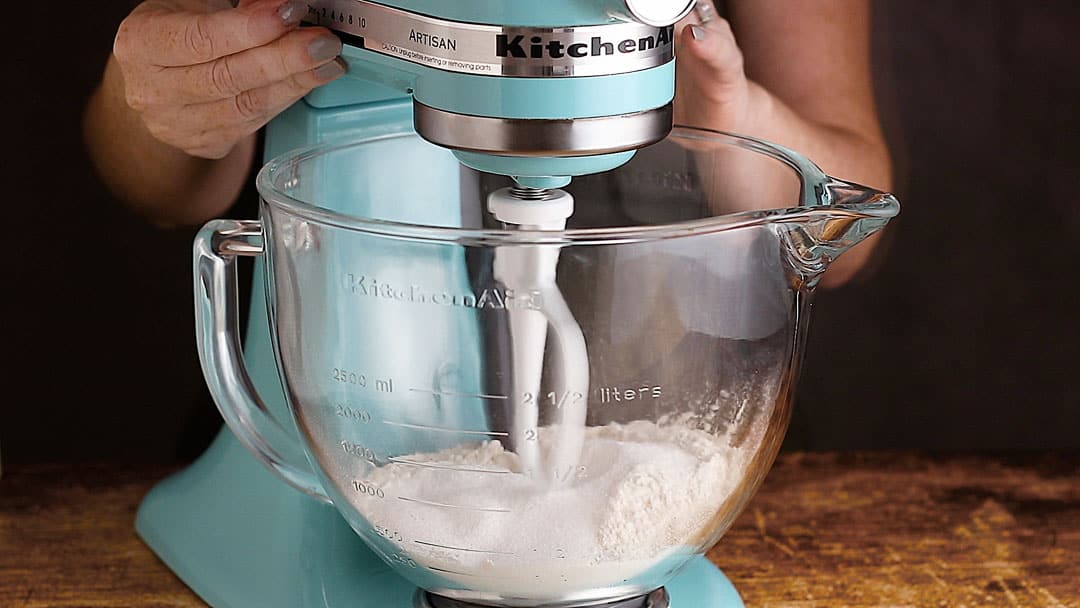 Then add in the softened butter. Mix this on medium-low speed, until the mixture starts to look like damp sand. 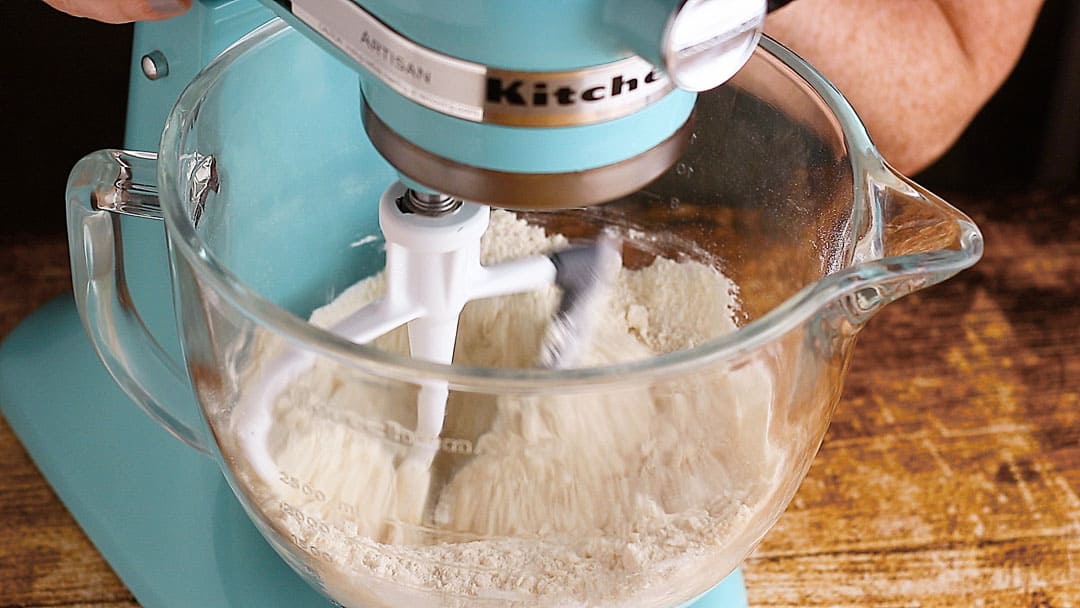 We are using the reverse creaming method here. I love this method because it’s practically fool-proof, and it allows everything to happen in just one bowl. Yay for less dirty dishes!

Next, add the eggs in, one at a time. Allow each egg to fully incorporate, before adding the next one. This way your batter will be nice and smooth. 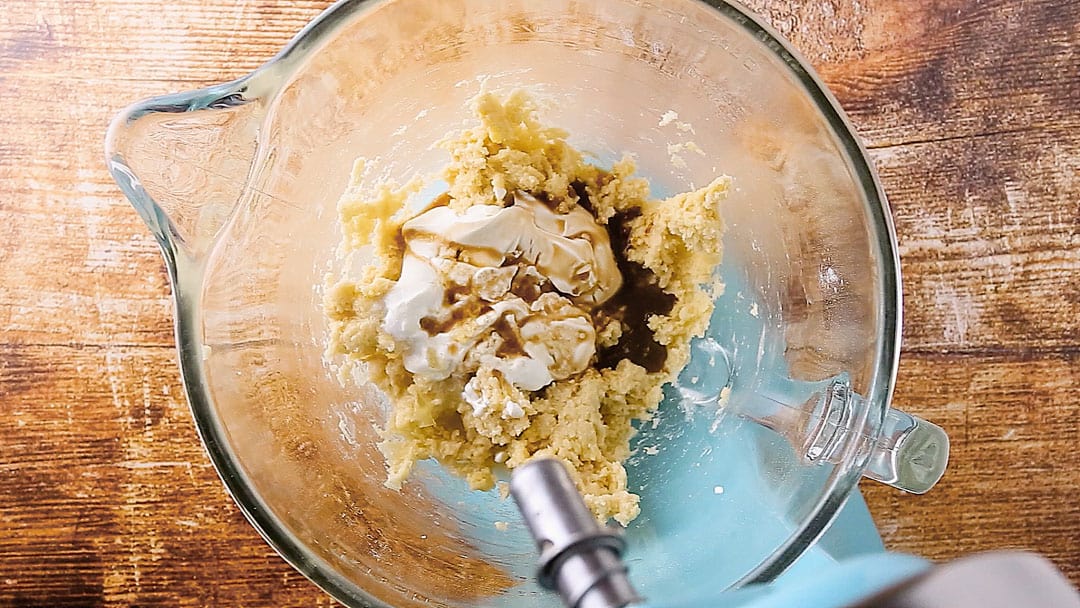 The final step is to add the liquid ingredients. Sour cream, lemon juice, and vanilla extract get mixed into the batter.

Transfer a little more than half this batter into a greased, 9-inch diameter springform pan, then top with the diced apples. 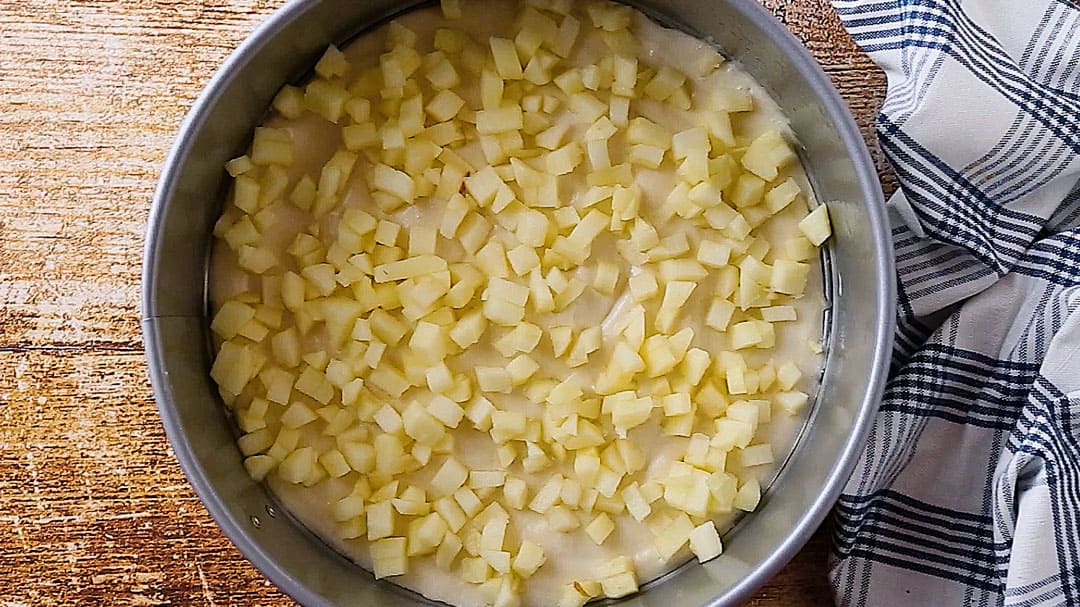 Then sprinkle about half the streusel over the apples. 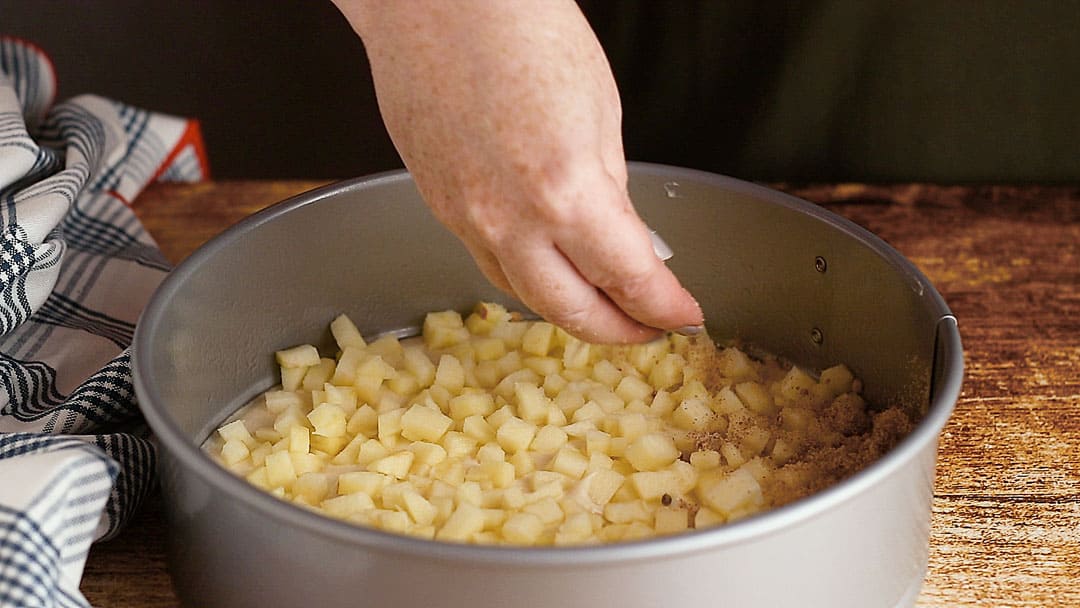 Layer on the remaining cake batter. It’s ok if the layers seem thin; it will puff up a lot in the oven as it bakes! 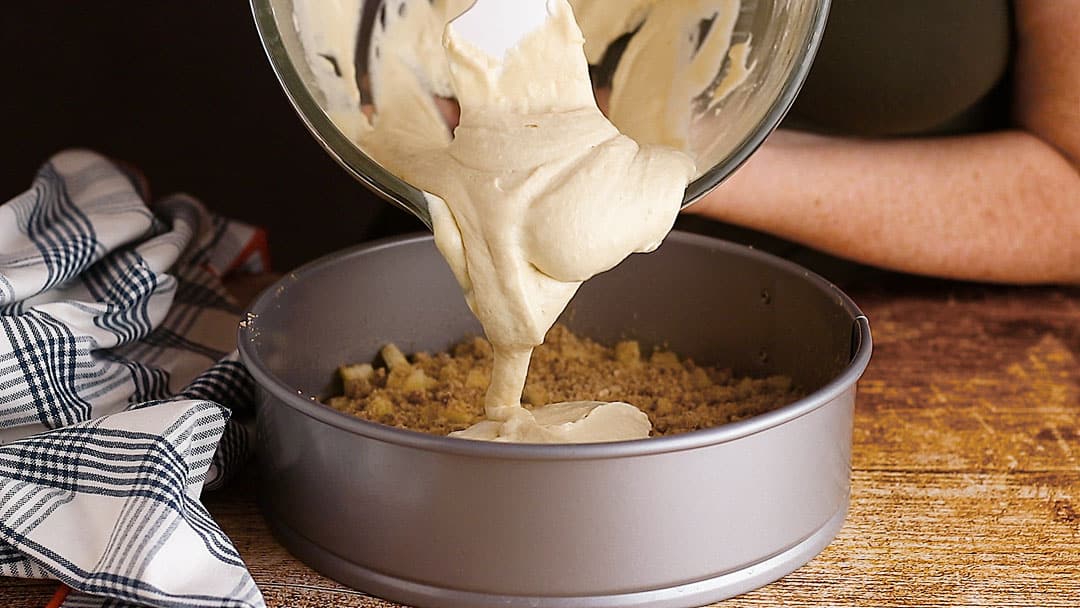 Then top with the rest of the crumb topping and bake! You’ll know it’s done when a toothpick inserted in the thickest part comes out clean.

Once your cake is cooled, you can remove the sides of the pan and dress it up with some pretty garnishes. 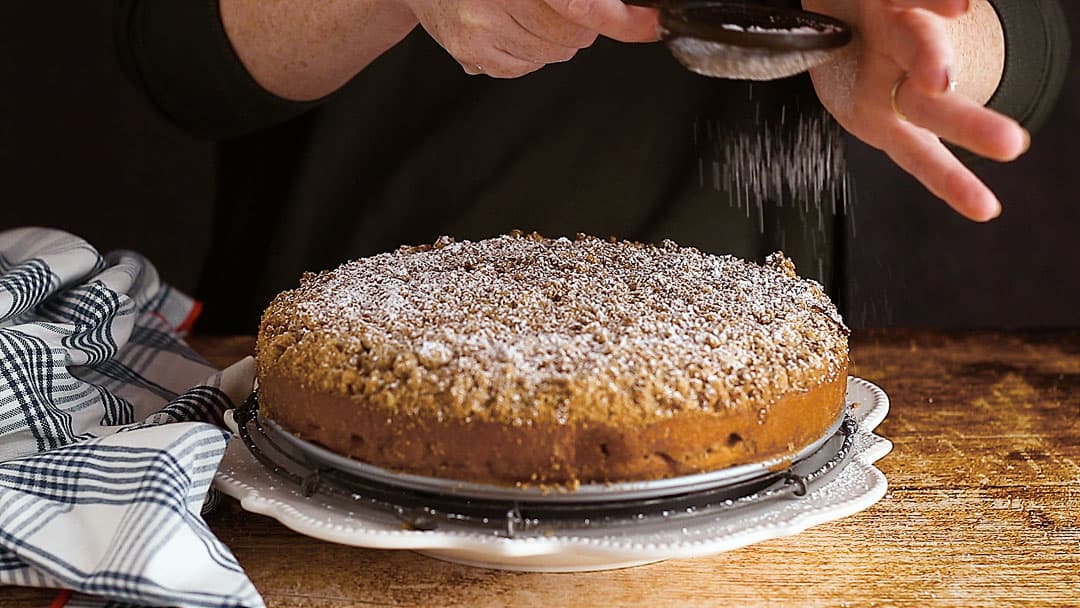 I love to dust anything crumb-topped with a sprinkling of powdered sugar. It just looks so gorgeous!

I also like to make a simple glaze with powdered sugar and milk. Stir these two ingredients together until smooth. 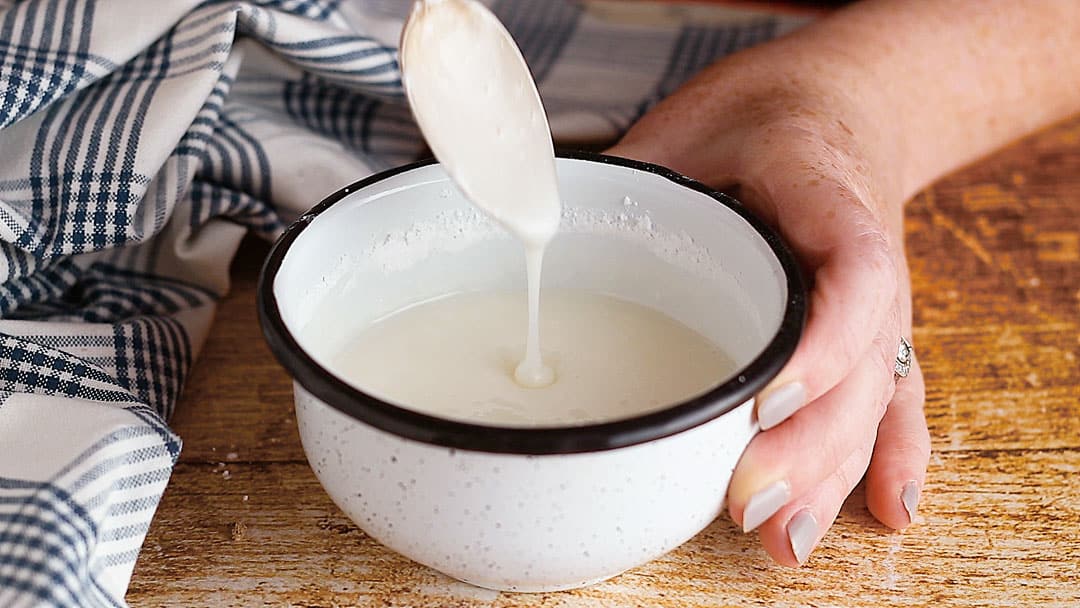 Drizzle the icing over the cake. It adds a little extra sweetness and really looks great. 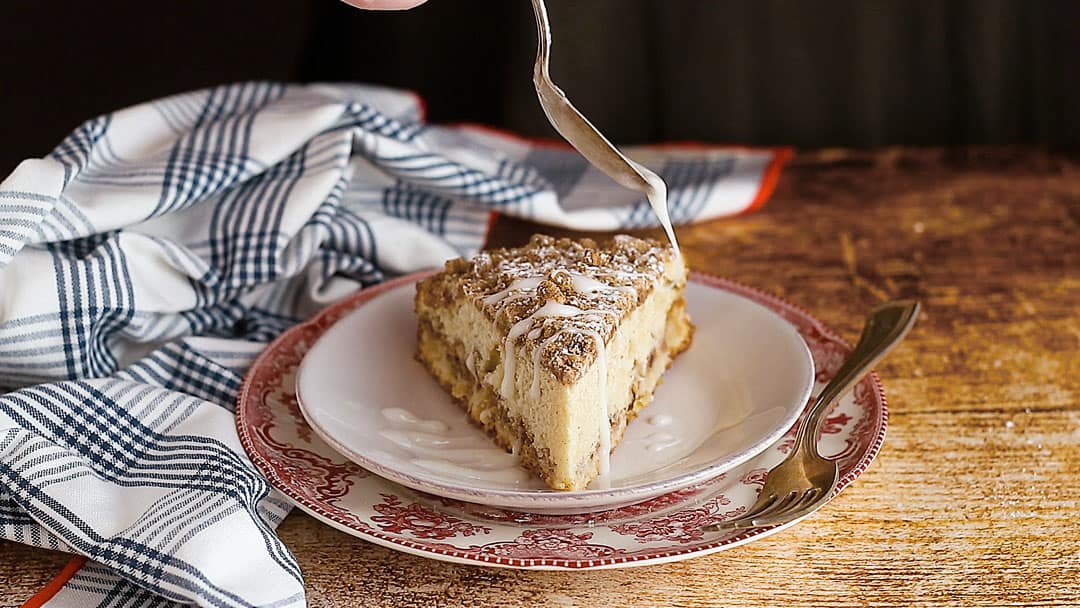 CAN THIS BE MADE GLUTEN-FREE?

This apple coffee cake can be made gluten-free just by swapping out the flour for a gluten-free blend. Look for one that subs 1:1 for regular flour. Here are a few good options: 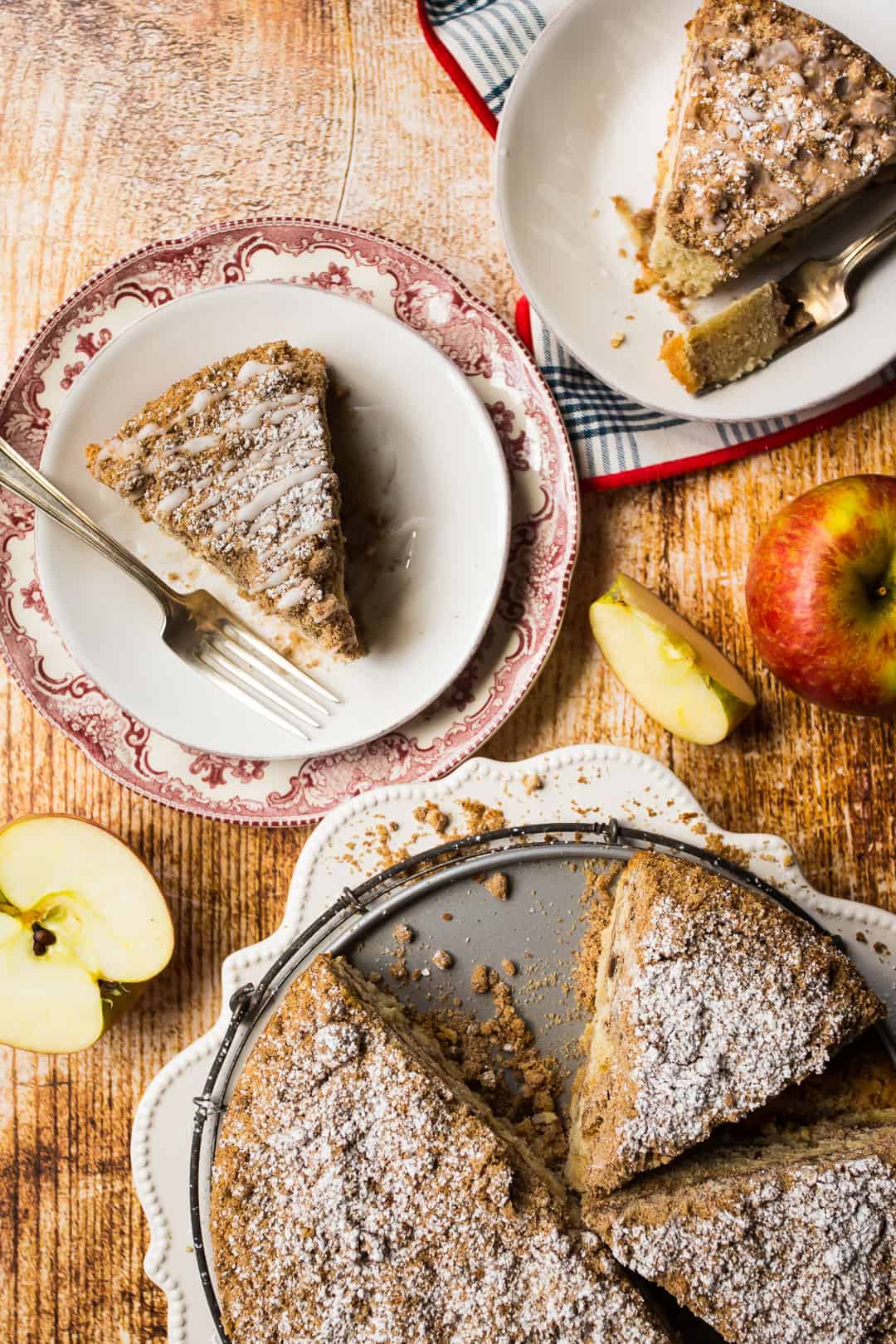 CAN YOU USE CANNED APPLE PIE FILLING INSTEAD OF FRESH APPLES?

I really love the subtle sweetness and slightly tart flavor of fresh apples. Plus they give a really nice texture to this cake.

But if you’re pressed for time you could probably substitute canned apple pie filling.

Just keep in mind that they will be a lot sweeter than fresh apples.

CAN THIS BE BAKED IN A DIFFERENT SIZED PAN?

If you prefer square slices of apple coffee cake, this recipe can be baked in a 9×9 pan.

You could also double the recipe, and bake it in a 9×13-inch pan. Just be aware that the bake time will most likely need to be increased. You’ll know your cake is done baking when a toothpick inserted in the thickest part comes out clean.

HOW TO STORE APPLE COFFEE CAKE

Keep this coffee cake tightly wrapped so it doesn’t dry out or become stale.

It should keep at room temperature for a day or two; in the fridge for about a week.

CAN YOU FREEZE APPLE COFFEE CAKE?

This cake freezes very well! Wrap it tightly in plastic wrap and it should last in the freezer for at least 2 months.

Thaw it at room temperature or in the fridge.

It can be warmed gently in the microwave for 10 to 15 seconds per slice, or wrap it in foil and pop it in a 170-degree F oven until warmed through. 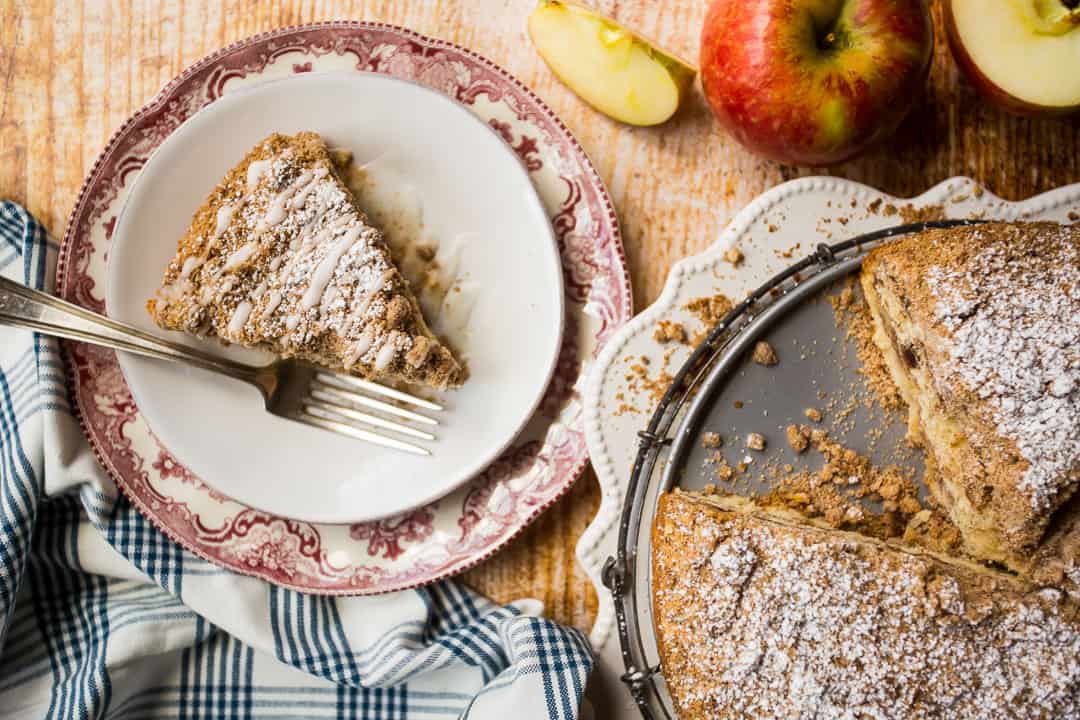 A few more of my son’s favorite cinnamon-apple desserts: 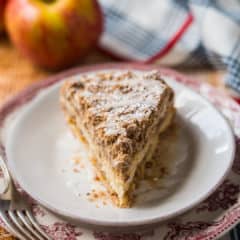 *Plain Greek yogurt can be substituted.