Old-fashioned apple crisp: so comforting! This easy recipe has tons of softly spiced apples and a crunchy, buttery crumble topping. It’s the best! 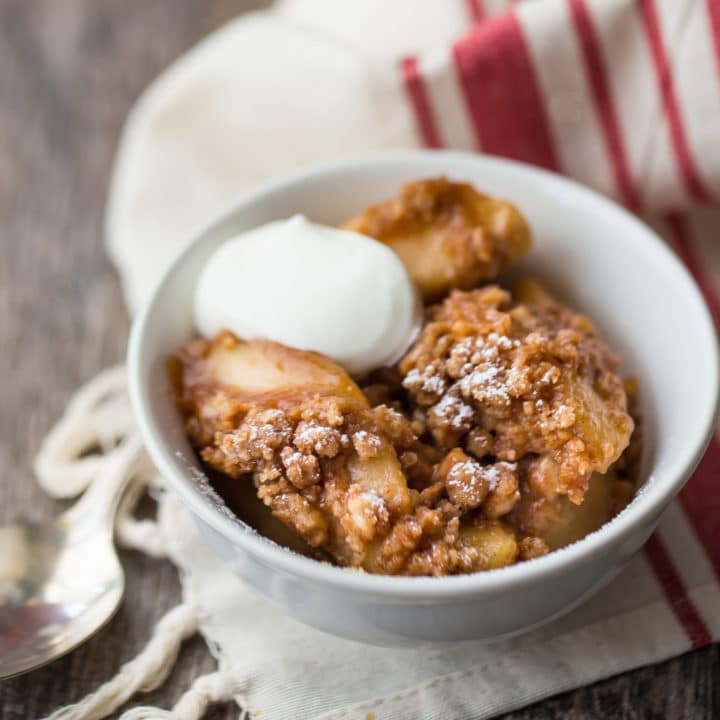 Today I’m sharing one of the most beloved fall recipes I can think of: Apple Crisp. Am I right?

Could there be anything more cozy and comforting than a warm bowl of old-fashioned apple crisp? I don’t think so.

I absolutely adore apple desserts at this time of year. Soft, sweet apples, swimming in cinnamon, sugar, and butter. YUM! In the last few weeks alone, I’ve shared my Apple Turnover recipe, an incredible Jewish Apple Cake, and a killer Homemade Apple Butter. Need more proof that I’m an apple lover? Check out ALL the apple recipes on this site here: Baking a Moment Apple Recipes.

But for today’s recipe, we are keeping things really simple and EASY. Apple crisp is one of the easiest fall dessert recipes ever- you’re going to love it!

WHAT IS APPLE CRISP?

Apple crisp is seriously one of the best things about fall. It’s a great way to use up your haul if you’ve gone apple picking, and it makes your whole house smell amazing! Seriously, who needs scented candles??

But my favorite thing about it is how easy it is to make. As much as I love baking a pie, let’s be honest. It’s a labor of love! Making pie crust can be a little fussy, and it’s not the kind of thing you can just whip up on the spur of the moment.

Fruit crisps, on the other hand, are easy as can be. Just pile the cooked apples into a baking dish, slap on the topping, and bake. Ta-dah!

If you live outside of the US, you may be more familiar with the term “apple crumble.” Same thing, different name!

But it is NOT the same as a cobbler or a pie. Cobblers usually have either a biscuit-like topping, or more of a cake-y topping. Check out this Peach Cobbler recipe and you’ll see what I mean. And a pie will have a flaky pastry crust. If you want a great apple pie recipe, click here: Simply Perfect Apple Pie. It’s an oldie but a goodie!

HOW TO MAKE APPLE CRISP

This apple crisp recipe is really easy to make. Just cook the apples, top them with a cinnamon-y crumb topping, and bake. So simple but so good.

Start with the apples. Just peel, core, and cut them into eighths.

Put them in a big pot with a little melted butter, and add brown sugar, cornstarch, cinnamon, and a pinch of salt to balance the flavors.

(The cornstarch will help to thicken the juices so that your filling isn’t too runny.)

Then add the juice of one lemon, and toss everything around to get every slice of apple coated in that yummy mixture.

Add water and cook the apples over medium-low heat until softened. You can make them as soft or as firm as you like. I like them soft on the outside with just a little bit of bite towards the center. This takes about 20 minutes on my stovetop.

Transfer the apples to a 2-quart baking dish, and spread them out in an even layer.

Now you can get going on your crumb topping. It’s just melted butter, flour, sugar, cinnamon, and salt. Stir everything together with a fork until it looks crumbly, and pile it on top of the apple filling.

I used brown sugar for both the filling and the topping you see in these pics and video. But you could totally use granulated white sugar too. If you do, obviously the color of your apple crisp will just be a little paler.

And if you want, you can customize your crisp topping by adding oats and/or nuts. Old-fashioned oats give a really nice texture, or you could use quick oats. And walnuts or pecans would be a great complement. (If you want to add oats, you may need to add an additional tablespoon or so of butter to your streusel mixture.) 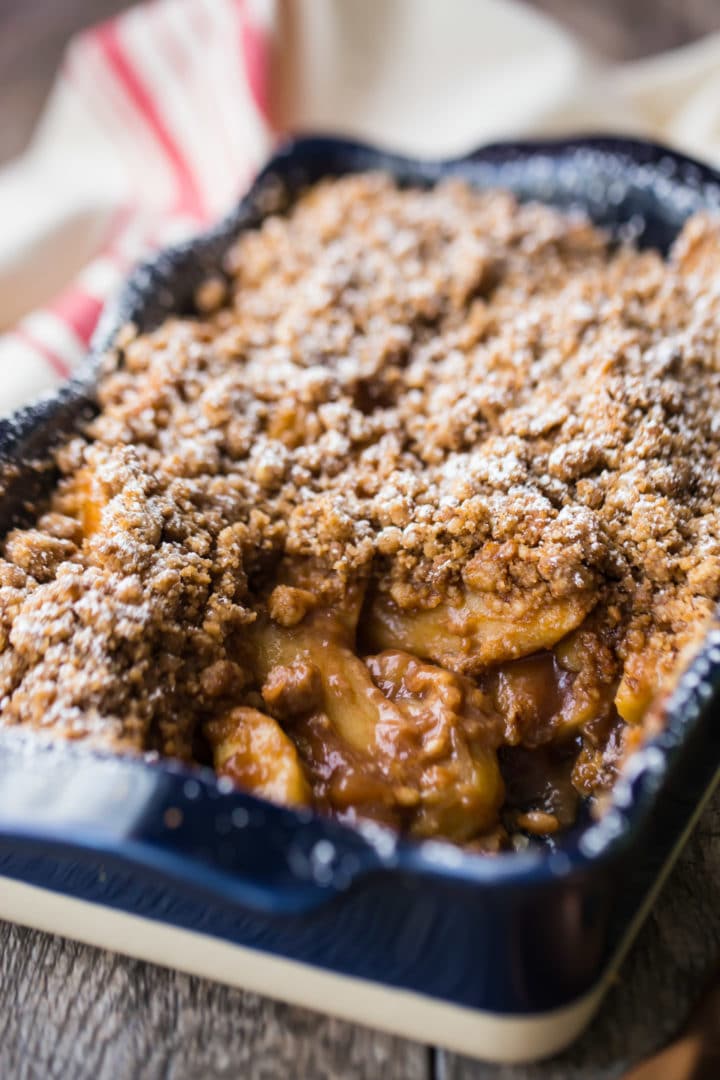 CAN THIS APPLE CRISP BE MADE GLUTEN-FREE OR VEGAN?

If you have someone in your life with food sensitivities, I have great news for you: this apple crisp can totally be made gluten-free OR vegan.

For gluten-free apple crisp, just use a gluten-free flour blend that subs 1:1 for regular flour. Here are a few good options:

If you want to make it vegan, just substitute the butter for your favorite plant-based butter substitute. Coconut oil would be a great choice.

WHAT KIND OF APPLES ARE BEST FOR APPLE CRISP?

This recipe is practically foolproof! You can really use any kind of apple you like. It all depends on your personal preference.

I often tend to reach for Granny Smith apples, because they’re so firm and they hold up well for baking without turning to mush. And I really love their tart, intensely apple-y flavor.

But Braeburn, Gala, Honeycrisp, or Cortland would also work well. 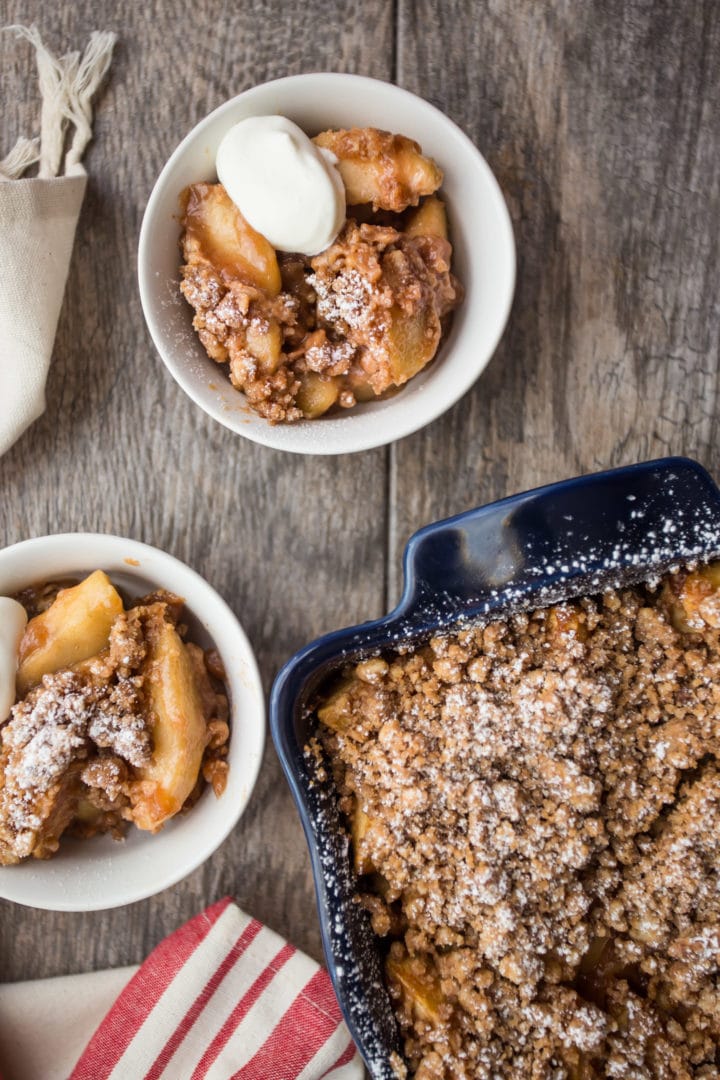 HOW TO SERVE APPLE CRISP

This dish can be eaten warm or cold. Personally, I love it warm. It’s total comfort food!

I also love to add a sprinkling of powdered sugar, a dollop of whipped cream, or a scoop of vanilla ice cream. And my favorite salted caramel sauce will totally take this apple crisp to the next level!

CAN THIS APPLE CRISP BE MADE AHEAD?

You can definitely make both components of this recipe ahead. The apples can be cooked and kept in the fridge, and the same goes for the crumble topping. When you’re ready to serve it, just layer everything in the baking dish and heat it in the oven!

Or, you could fully assemble it and just keep it in the fridge.

HOW TO STORE APPLE CRISP

This recipe will keep (lightly covered) at room temperature for a day or so, and in the fridge for up to a week.

It can be gently rewarmed in a low (170 degrees F) oven, or in the microwave.

You can also freeze it, although it’s possible the crumb topping might become a little soggy. Thaw it in the fridge, then rewarm as noted above. 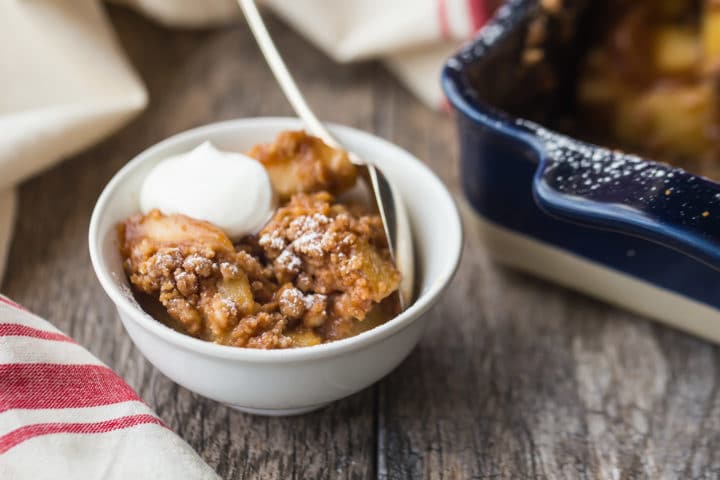 If you’re craving an old-fashioned, comforting apple dessert this fall, look no further than this easy apple crisp recipe! It’s the best! 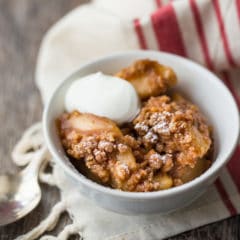