These pastries are way better than anything from a box!  Hazelnut frangipane filling is spiked with cinnamon and sweetened with brown sugar, encased in a flaky, butter-y pie crust and iced with a cinnamon yogurt glaze.  This is a breakfast well worth waking up for! 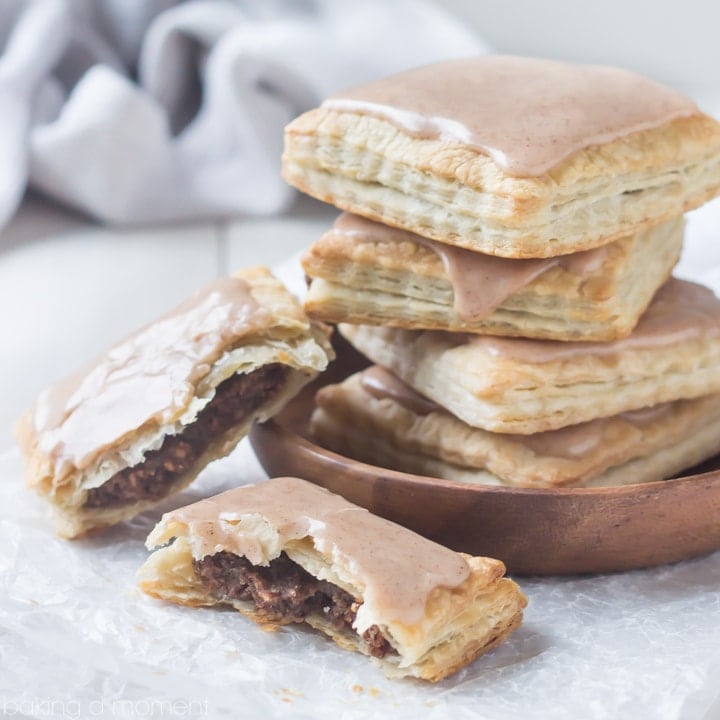 Ok I am on a breakfast kick for sure.  There’s no denying it at this point.  Over the last month, I’ve posted waffles, muffins, coffee cake, and now these little hand pie/breakfast pastry/pop tart lovelies.

Something about September and back to school.  It’s a hard transition for the little ones, so I suppose I’m trying to make it easier by giving them something delicious to make those early mornings a little sweeter. 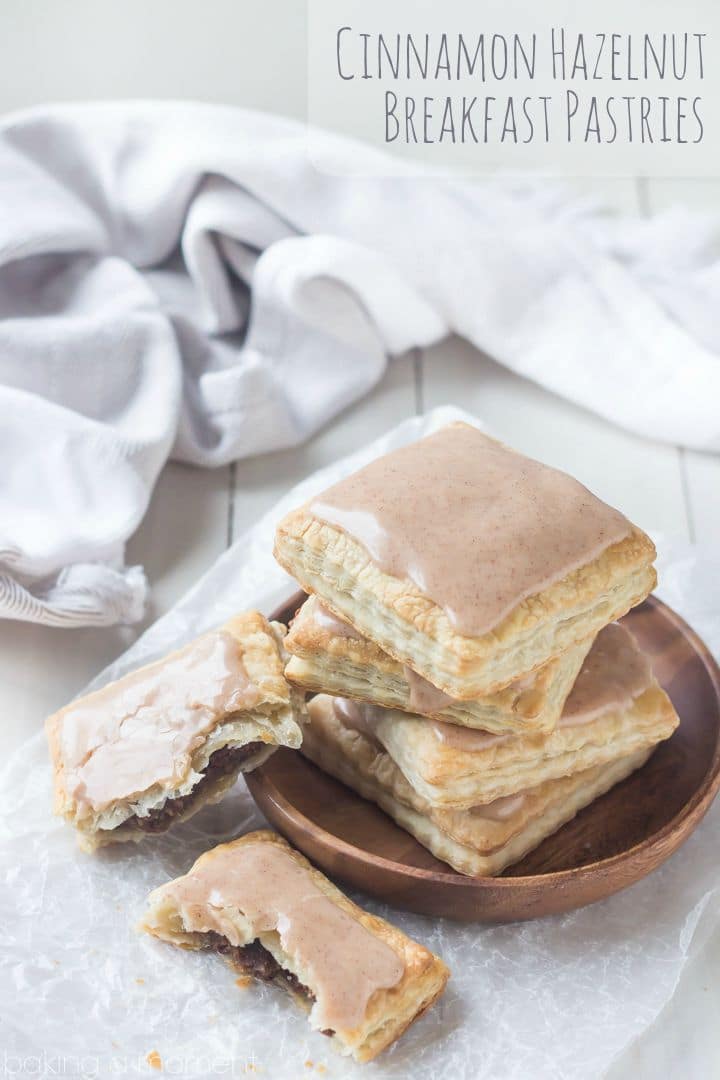 You may remember me mentioning about my younger son being an unbelievably picky eater.  The truth is, he doesn’t try most of the things I bake.  He has a few favorites and he sticks with those, and those only.

However, the other day we were talking and I casually mentioned something about baking up some cinnamon brown sugar breakfast pastries.  His exact words were, “that sounds kinda good.”  That sounds kinda good!!!  I almost fell on the freaking floor.  He has never said anything like that before.  Could this be a chink in his armor?

Well, he didn’t end up trying them but he did admit to liking the smell.  I think we are moving in the right direction 😉

The older one, on the other hand…  and his dad… and ok me!  We loved them.  The recipe made a dozen and they were gone in a few days flat.

It all starts with my favorite pie crust recipe.  I make a big batch and keep it in the fridge or freezer for whenever the pie baking (or breakfast pastry making) urge strikes.  It comes together with just a few pantry staples and it is unbelievably flaky, with a rich, butter-y taste that just can’t be beat.  Roll it out to about 1/8-inch thickness, then cut into squares.  I really like this big square cookie cutter, but you could also use a knife or a pizza cutter.

Then just spoon on a few tablespoons of this cinnamon hazelnut frangipane.  It sounds fancy but it’s just ground hazelnuts (aka hazelnut meal), brown sugar, cinnamon, and egg stirred together, with a little vanilla and salt for good measure.  Top with another square of dough, pinch together, and bake! 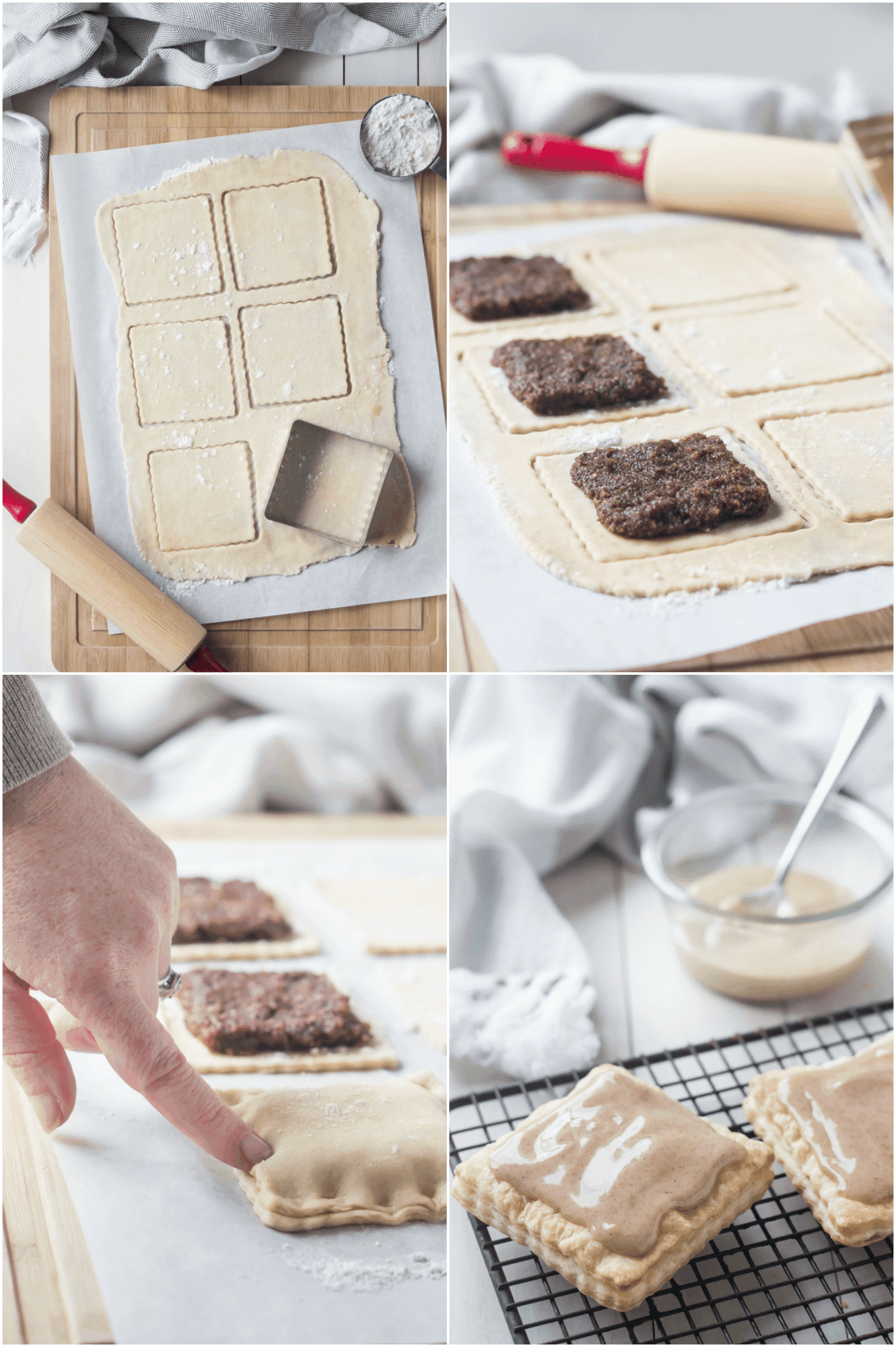 While they’re getting puffy and golden in the oven, you can whip up a little sweet cinnamon glaze.  Just a few tablespoons of Greek yogurt stirred into powdered sugar, and spiked with warm cinnamon.

One of these, with a glass of milk (or hot cup of coffee!) and your day will be off to a great start! 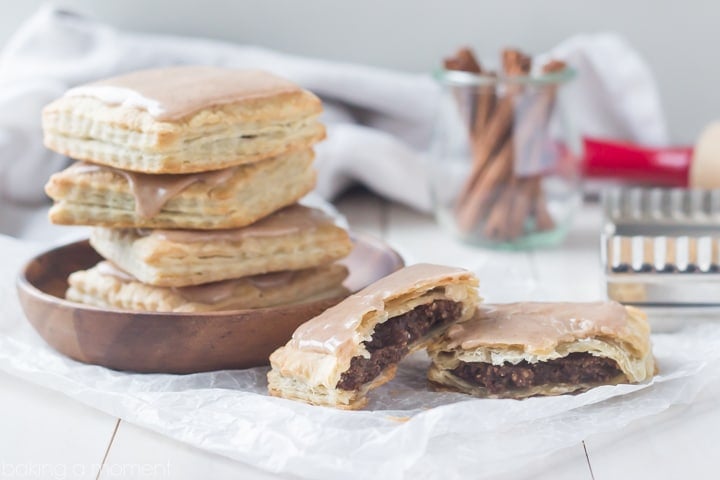 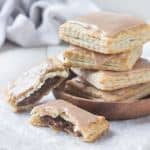 These pastries are way better than anything from a box! Hazelnut frangipane filling is spiked with cinnamon and sweetened with brown sugar, encased in a flaky, butter-y pie crust and iced with a cinnamon yogurt glaze. This is a breakfast well worth waking up for!