These cinnamon pecans are light, crunchy, and just sweet enough. Perfect for snacking, as a garnish for salads or veggies, or as an easy homemade gift. 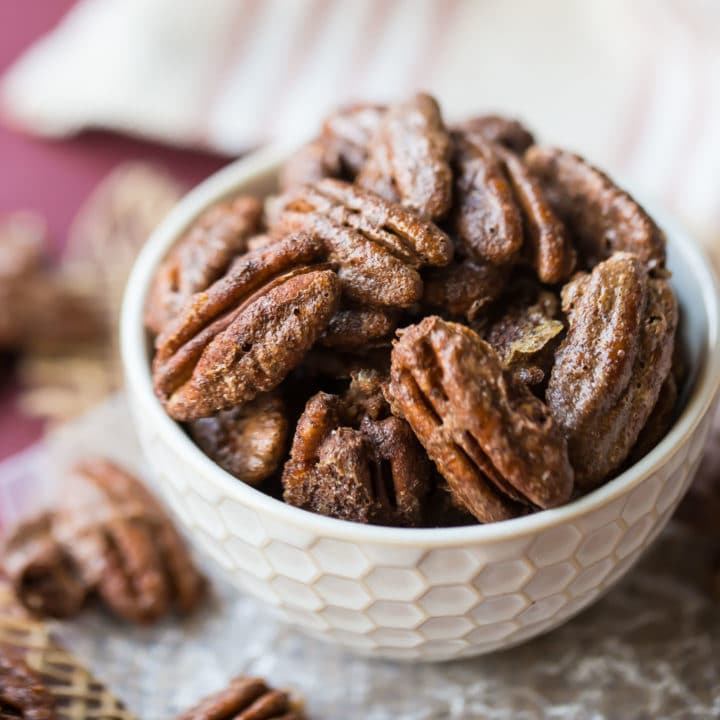 We are right in the thick of the holiday season now! And just like every other year at this time, I’m on the hunt for easy recipes that I can make big batches of, and give away as gifts.

In past years, I’ve shared vanilla sugar, homemade moose munch, and chocolate bark. But this year, I’m all about the cinnamon pecans! 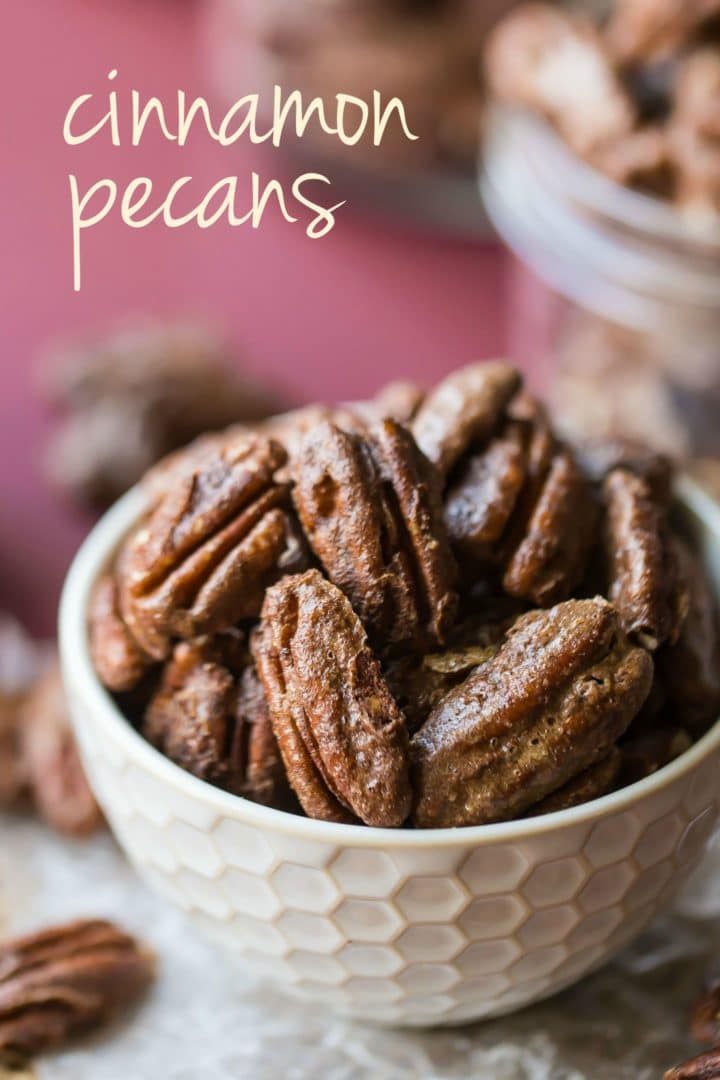 I think it’s a pretty common thing to get a bag of cinnamon pecans as a holiday gift. But I’ve often found them to be overly sweet and sugary. Sometimes you can’t really taste anything but the sugar.

This recipe definitely has some sweetness to it, but it’s balanced out by plenty of warm cinnamon spice, and a little bit of salt. Everything is in harmony, and the flavor of the toasty, crisp pecan can really shine.

WHAT ARE CINNAMON PECANS?

These crunchy, sweet spiced nuts are totally a holiday tradition. They’re light and crisp, and just perfect for snacking.

Just imagine a tender pecan, glazed in cinnamon sugar and roasted in the oven.

The baking process brings out all the toasty flavors in the nuts, and candies the glaze so every morsel is coated in crispy cinnamon deliciousness.

HOW TO MAKE CANDIED CINNAMON PECANS

This is a super simple recipe that only requires about 10 minutes of prep. And with that you’ll have enough nuts to snack on all season long, plus more for gifting.

Start by placing the pecans in a large bowl. For the prettiest candied pecans, choose whole jumbo pecan halves. To save a little money, look for pecan pieces instead.

Add egg whites, sugar, cinnamon, water, and salt to the bowl, and toss everything together until every nut is coated in the glaze.

Then just tip the pecans out of the bowl and onto a lined baking sheet. Parchment paper sheets are usually my go-to for lining pans, but when I’m making candied pecans I prefer to use a silicone mat. It’s really easy to pull the candied nuts off of one of these!

Spread the nuts into an even layer, and bake them in the oven.

You may notice when the candied pecans first come out of the oven, they seem soft and not really that crunchy. But don’t worry! As they cool they will crisp up a lot.

WHAT TO DO WITH CINNAMON SUGAR PECANS

Every year I put little bowls of spiced nuts out, all over the house so that guests can snack on them. They’re perfect for this type of use!

But I also love to add them to salads. They provide a nice crunch and a hint of sweetness.

They’re also really great as a garnish for side dishes or veggies. Try sprinkling some over your roasted sweet potatoes or green beans. So yummy!

But the best use has to be as a homemade gift. If you bake up a big batch of these cinnamon pecans, you’ll easily have enough to gift to 6 to 10 of your most favoritest people. Package them up in glass jars, or in clear cellophane bags, and tie with a pretty ribbon. Who wouldn’t love to get a gift like that??

CAN GLAZED CINNAMON PECANS BE MADE AHEAD?

You can definitely make these cinnamon pecans ahead! It’s a great way to get a jump on your holiday gift-giving.

These nuts will keep at room temperature for 4 to 6 months. Just be sure to keep them in an airtight container! 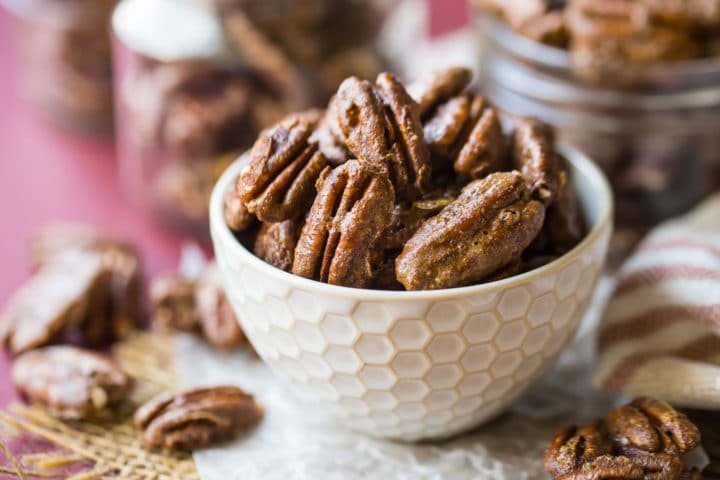 If you need a Christmas gift idea that’s economical, easy to make, and from the heart, look no further than this cinnamon pecans recipe! 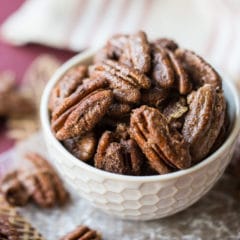 These cinnamon pecans are light, crunchy, and just sweet enough. Perfect for snacking, as a garnish for salads or veggies, or as an easy homemade gift.

*You can use any kind of nut for this recipe. Substitute your favorite!