Warm up with a crock of classic French onion soup! With a rich broth full of caramelized onions, toasty bread, & plenty of gooey, stretchy cheese. So good! 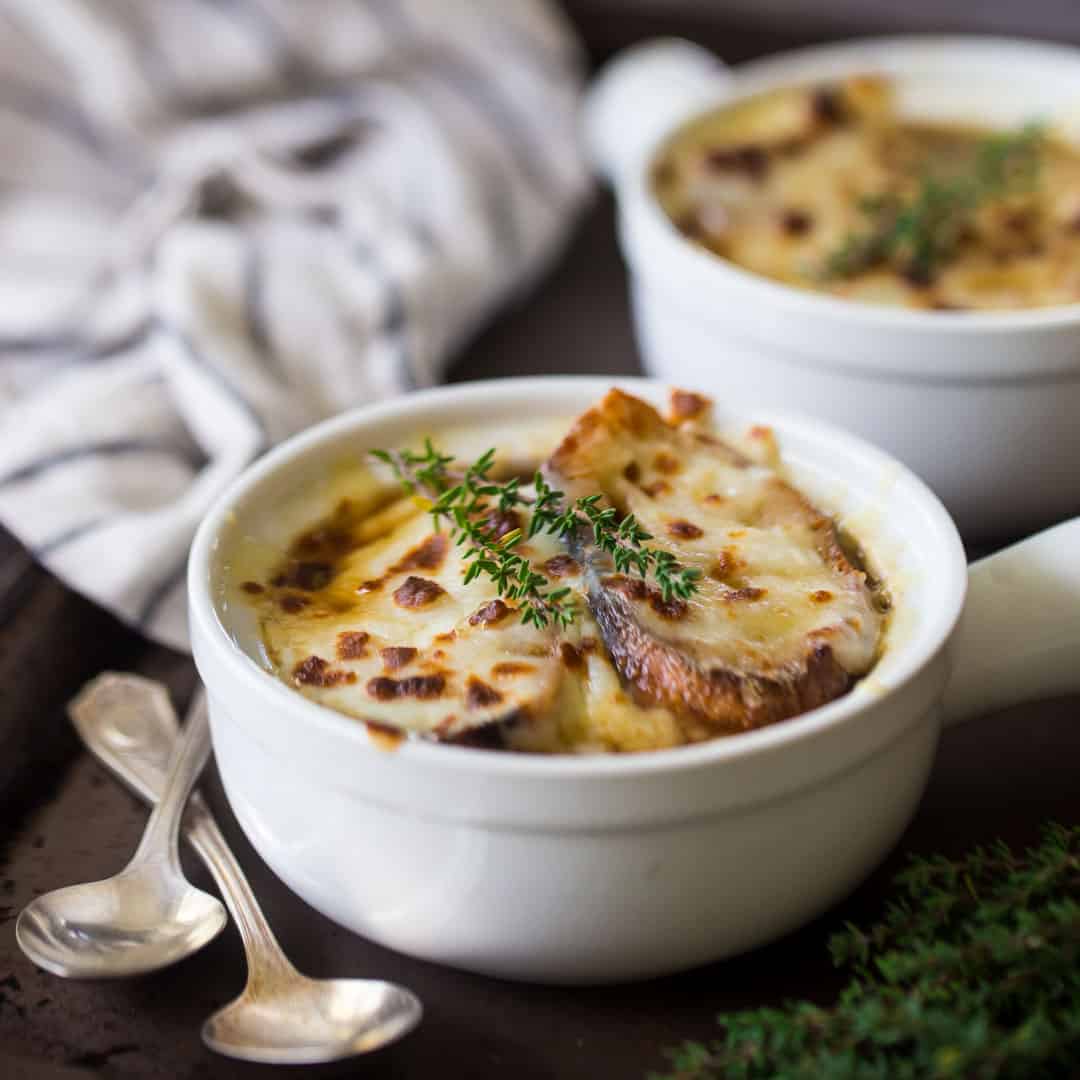 Hey how was your weekend?

Ours was busy but fun. Once again, we had stuff going on every day.

On Friday night we went to the cutest fall festival, and then Saturday we enjoyed a fabulous meal in town with friends. Sunday was a game day, so we spent time with some other friends in their basement bar. It was fun- but boy am I worn out today!

I just want to curl up under a fluffy blanket with a steamy bowl of French onion soup.

I love making soups, and I’ve got plenty of recipes here on this site to prove it!

Some of my favorites include this loaded baked potato soup, this corn chowder, and this broccoli cheese soup. My whole family loves these delicious and comforting one-pot meals.

And French onion soup is no exception. If it’s a cold, dreary, or blustery day and I see French onion soup on the menu, I know I’m getting it. I just love the way it warms you up from the inside out, and it has such a rich, full-bodied flavor. Not to mention all the gooey, stretchy, melty cheese on top!

So today I’m sharing my own favorite recipe with you. I really think it’s the best there is!

It’s so rich and hearty, and it’s got tons of flavor. The seasonings are perfectly balanced, with sweet caramelized onions in a savory broth, wintry herbs, and to-die-for toppings.

You’re going to love it! 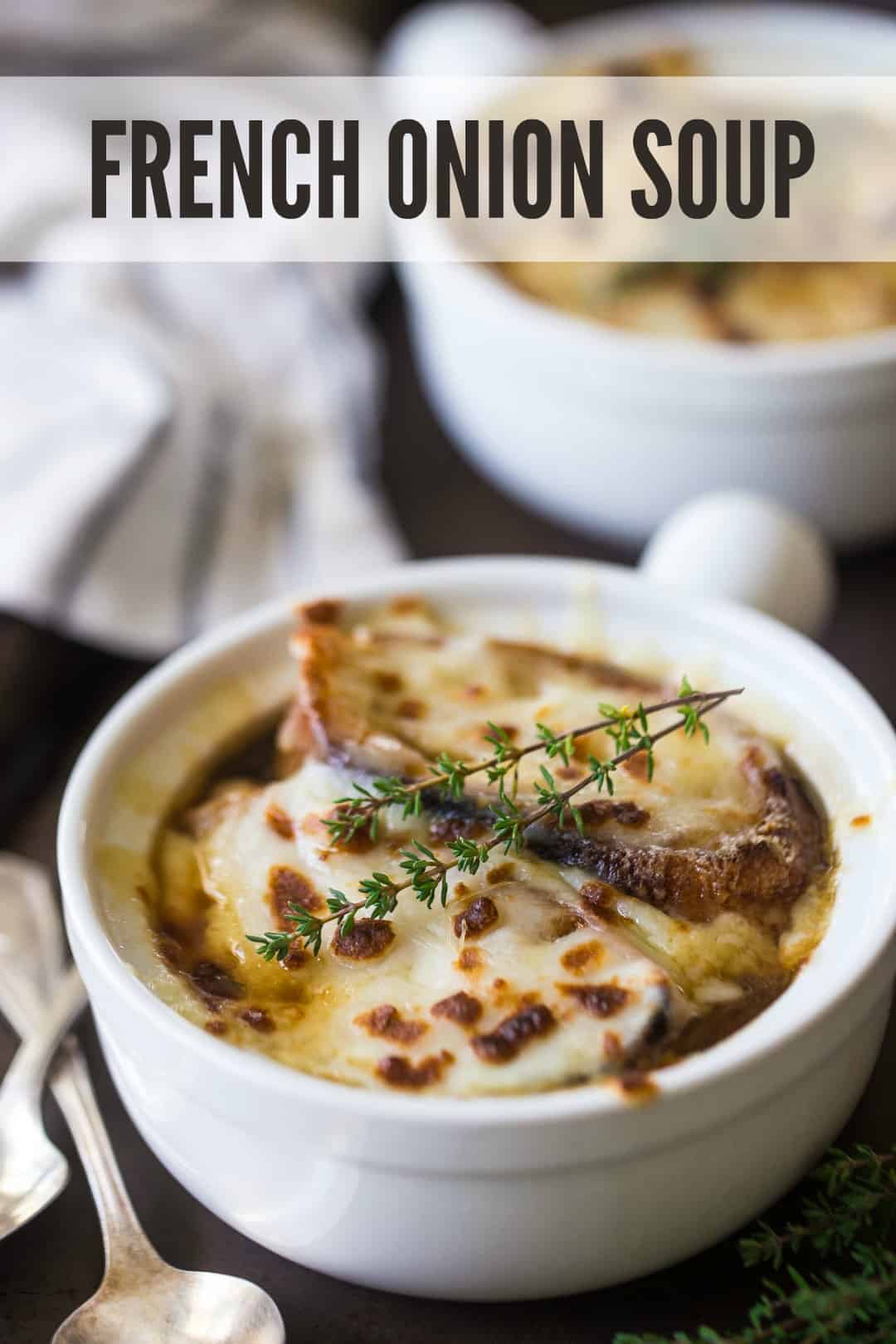 WHAT IS FRENCH ONION SOUP

The recipe originated in Paris, France, in the 1700’s. Hence the name.

It starts with a brothy but hearty base, made from caramelized onions and stock simmered with herbs and other seasonings.

Then, toasted bread croutons are floated on the top, and it all gets topped with a blanket of melted cheese.

HOW TO MAKE FRENCH ONION SOUP

To make this classic dish, start with the main ingredient: onions. This is the basis of the soup, so you’re going to need a lot!

Peel and halve them, then slice them about 3/16-inch thick. A mandoline slicer will make quick work of this task! 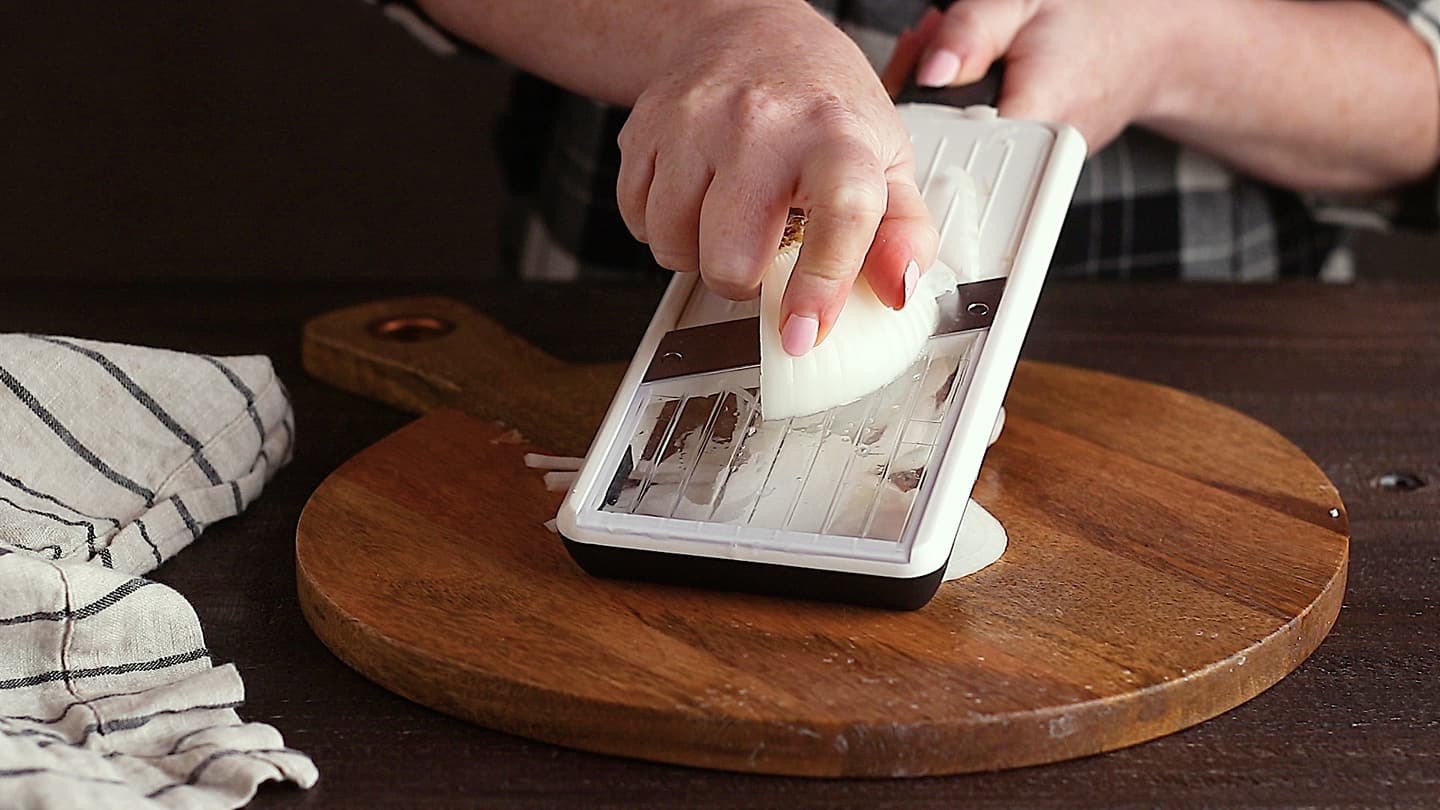 Put a little olive oil in a heavy-bottomed pot, and heat it up until it’s shimmering. Then add the onions. There will be so many it will fill your pot almost to the top! But don’t worry, they will cook down a ton. 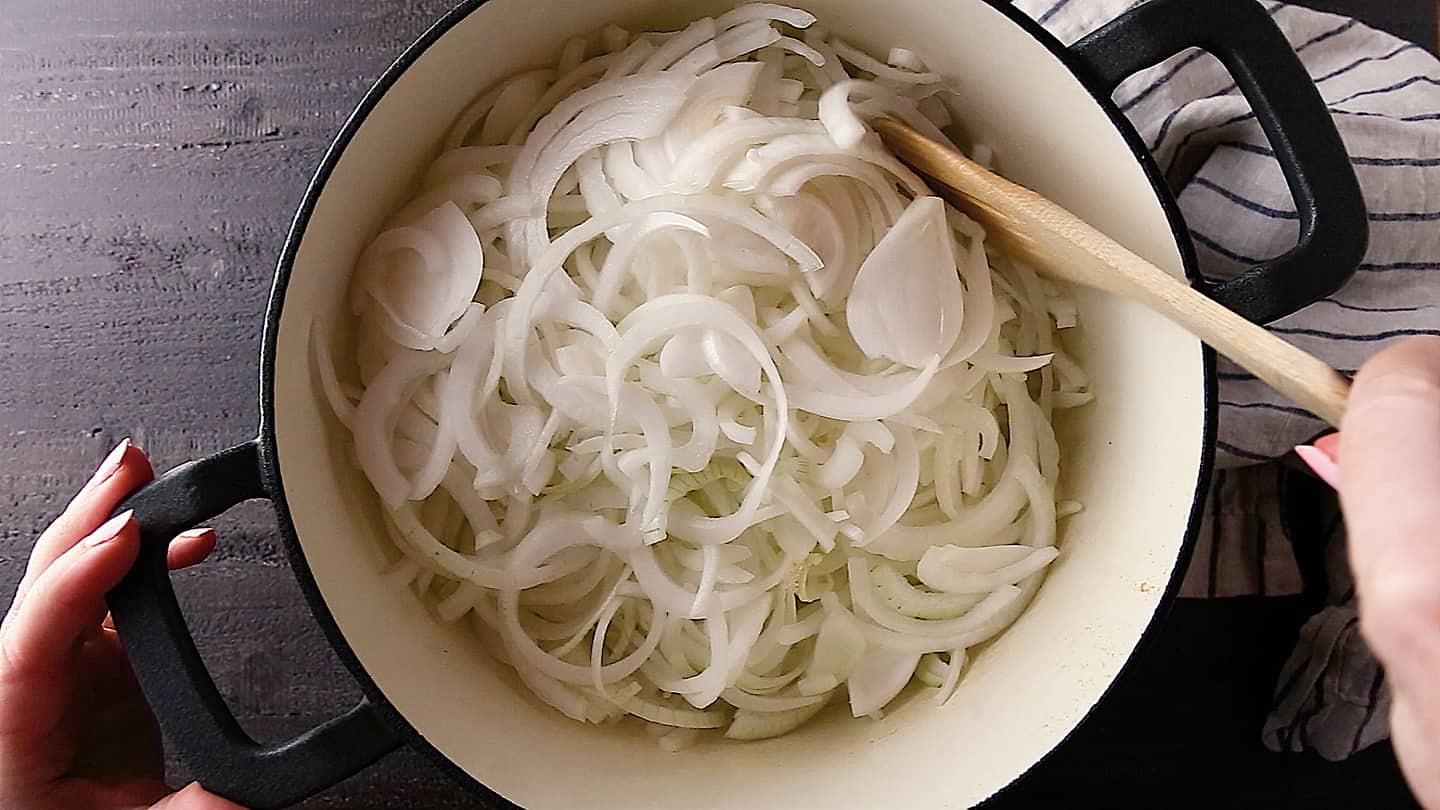 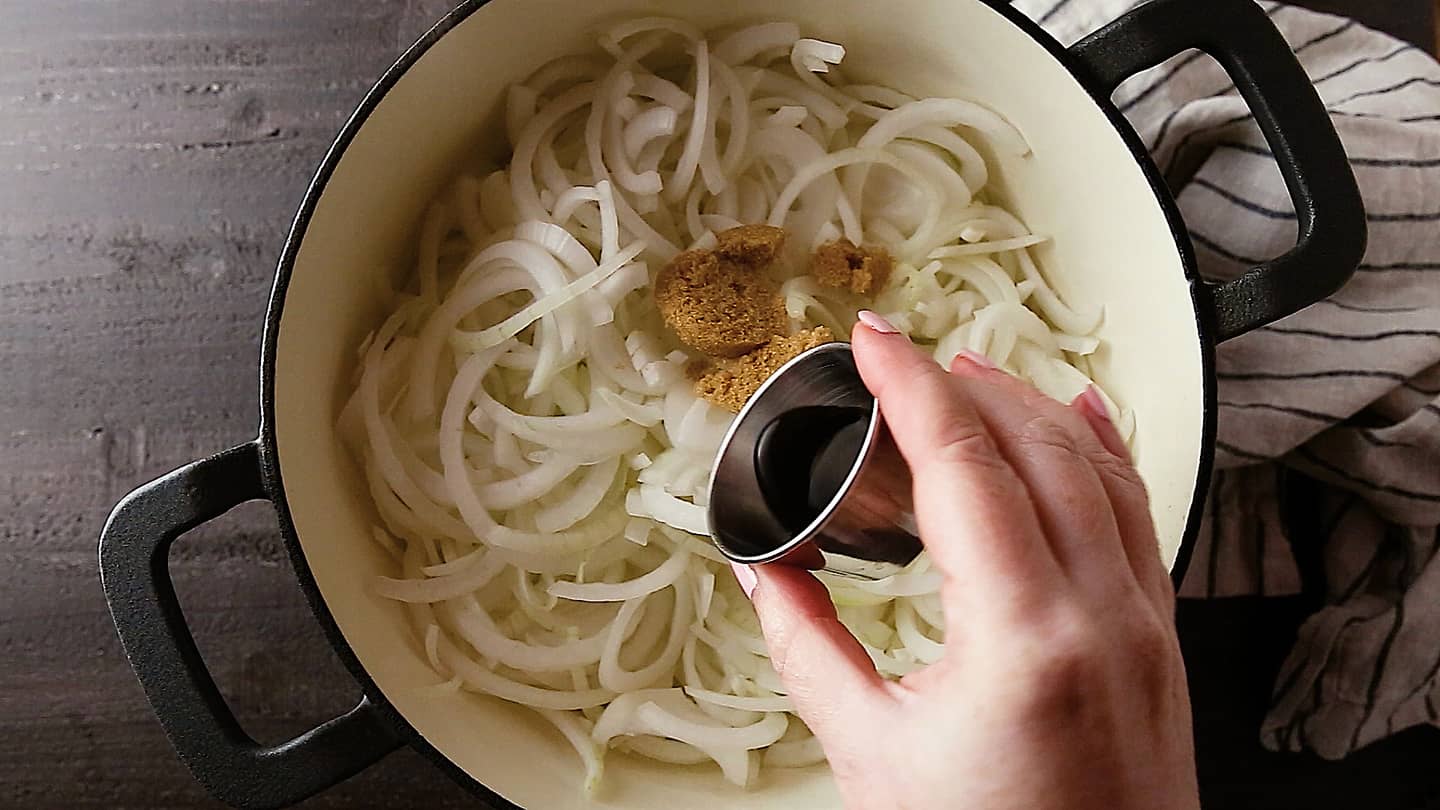 Keep cooking the onions, stirring every so often, until they’ve shrunk way down and are starting to turn a deep golden color. Then stir in a little garlic for even more flavor. 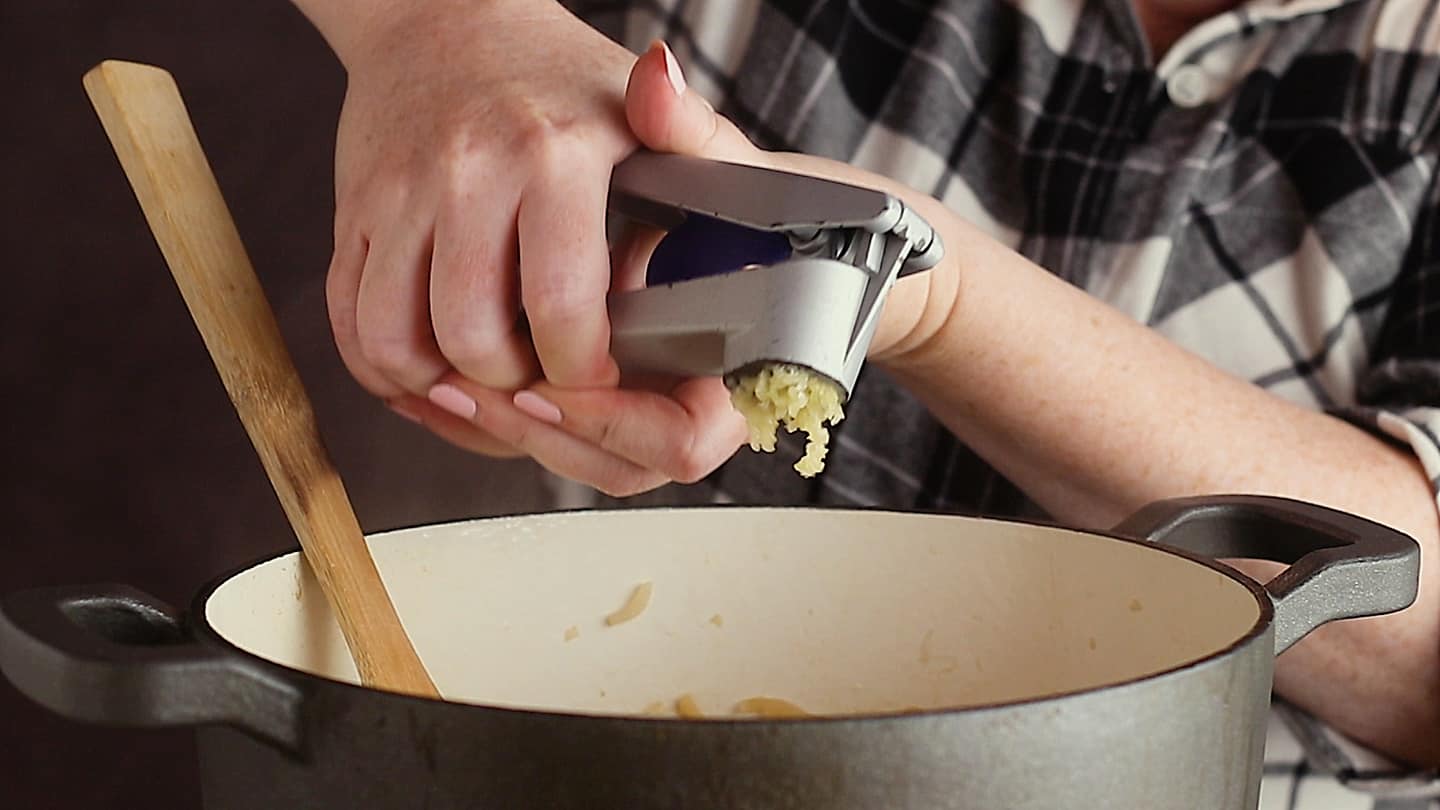 Almost right away the fragrance of the garlic will waft up and set your mouth watering!

When it’s really becoming aromatic, drop in a tablespoon of butter and let it melt. Then sprinkle a little bit of flour all over the surface of your cooked onions.

(This is an optional extra step. You can leave out the flour and butter if you’d like, but I really like adding them because it thickens the soup just a little bit, and gives it more body.) 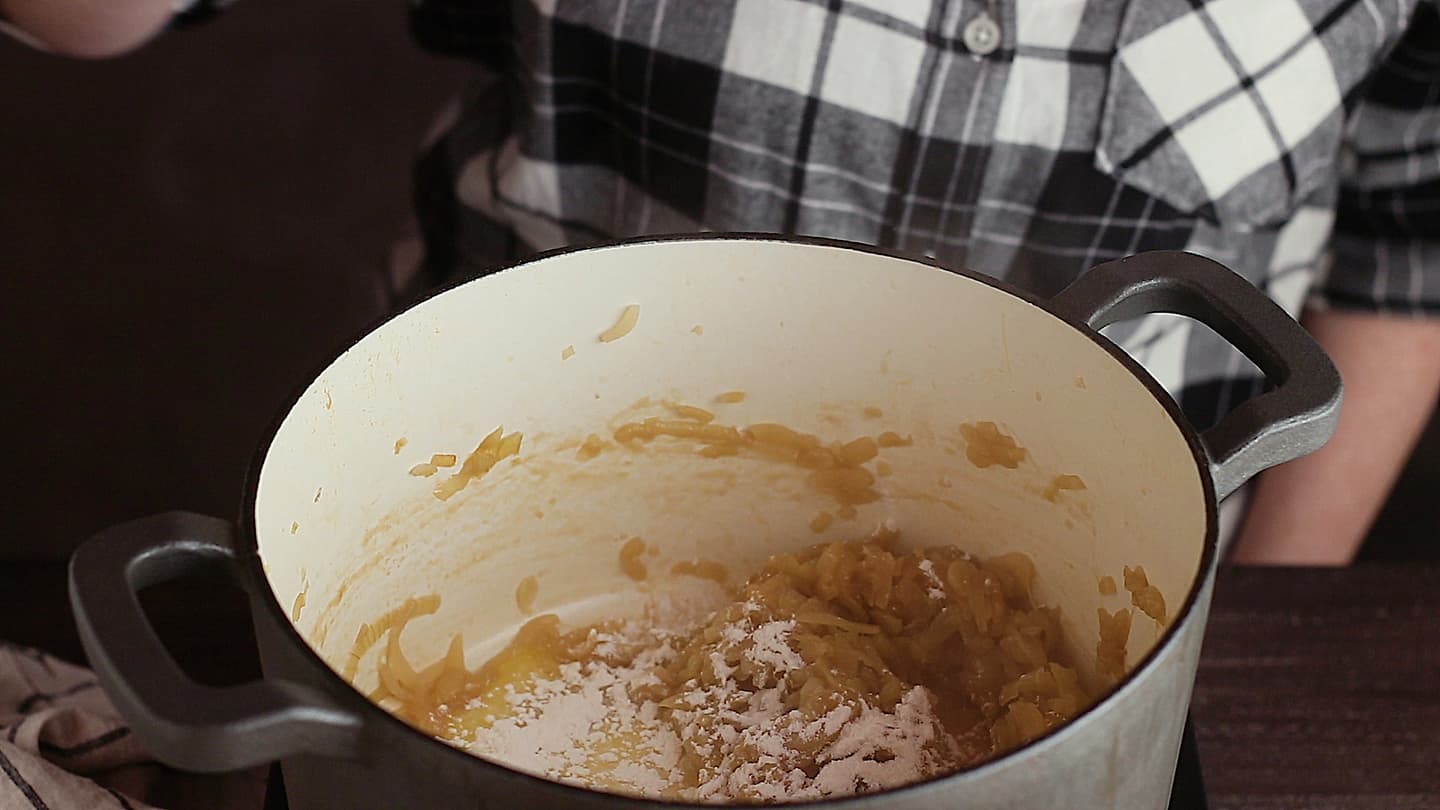 Stir everything together until it’s all combined, then add the wine. 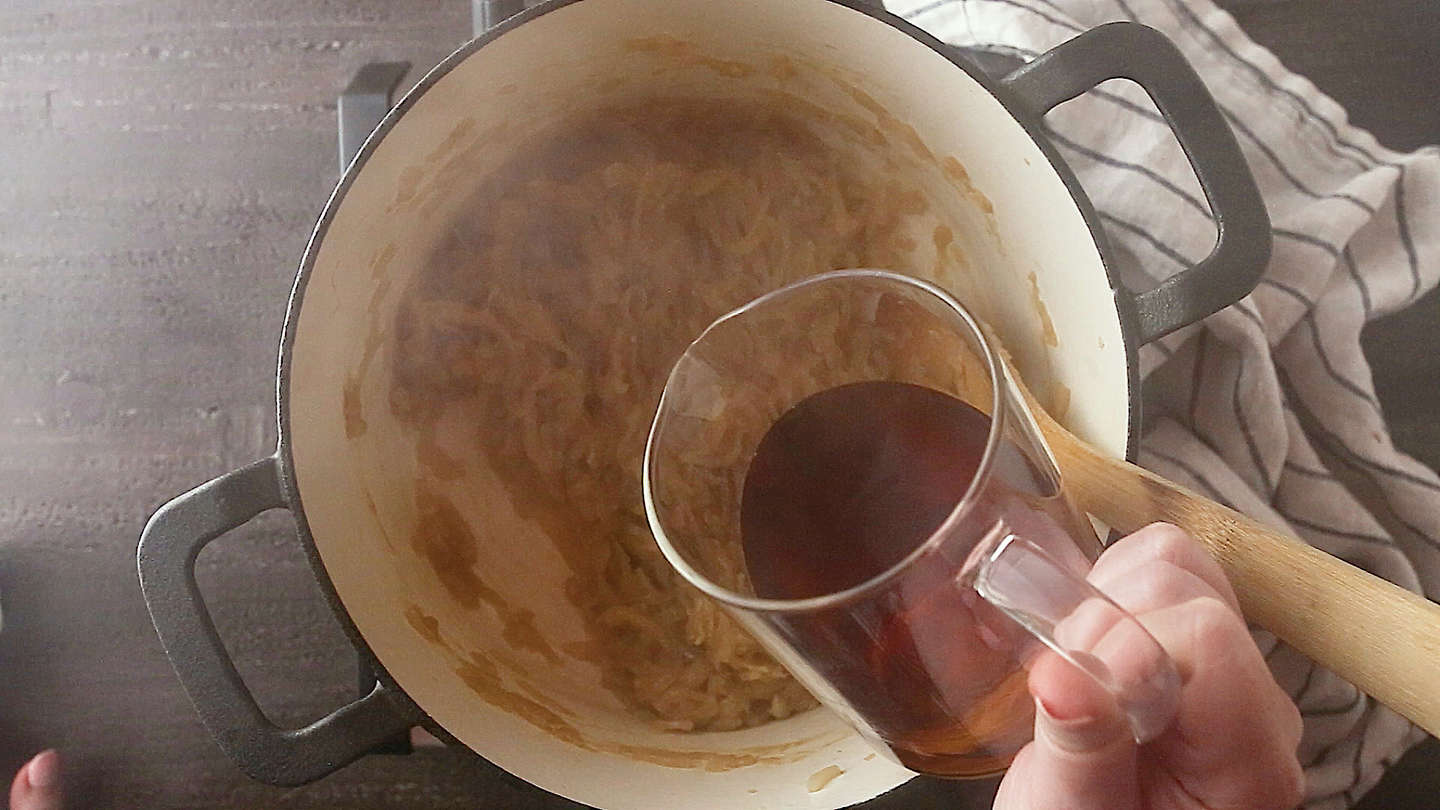 The wine is also optional, but I really love the added flavor it imparts. (There’s more on what kind of wine to use below.)

Stir the wine into the onions, allowing the alcohol to burn off.

If you notice any brown bits on the bottom of the pot, the wine will help to bring them up, along with all their yummy flavor. Use your spoon to scrape them up and help incorporate them into the liquid. 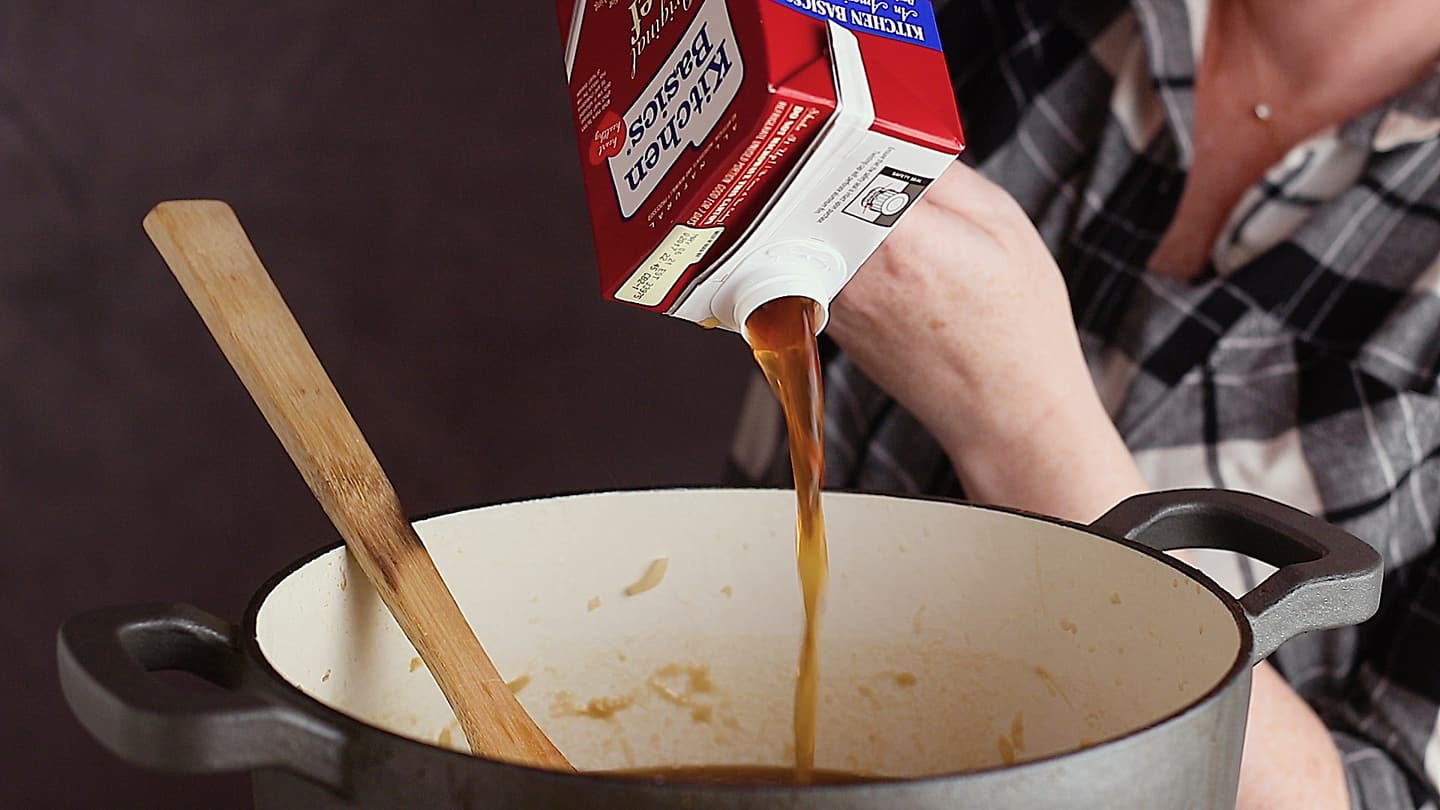 Then add in the stock. It’s traditional to use beef stock, but you could also substitute with chicken stock or vegetable stock. 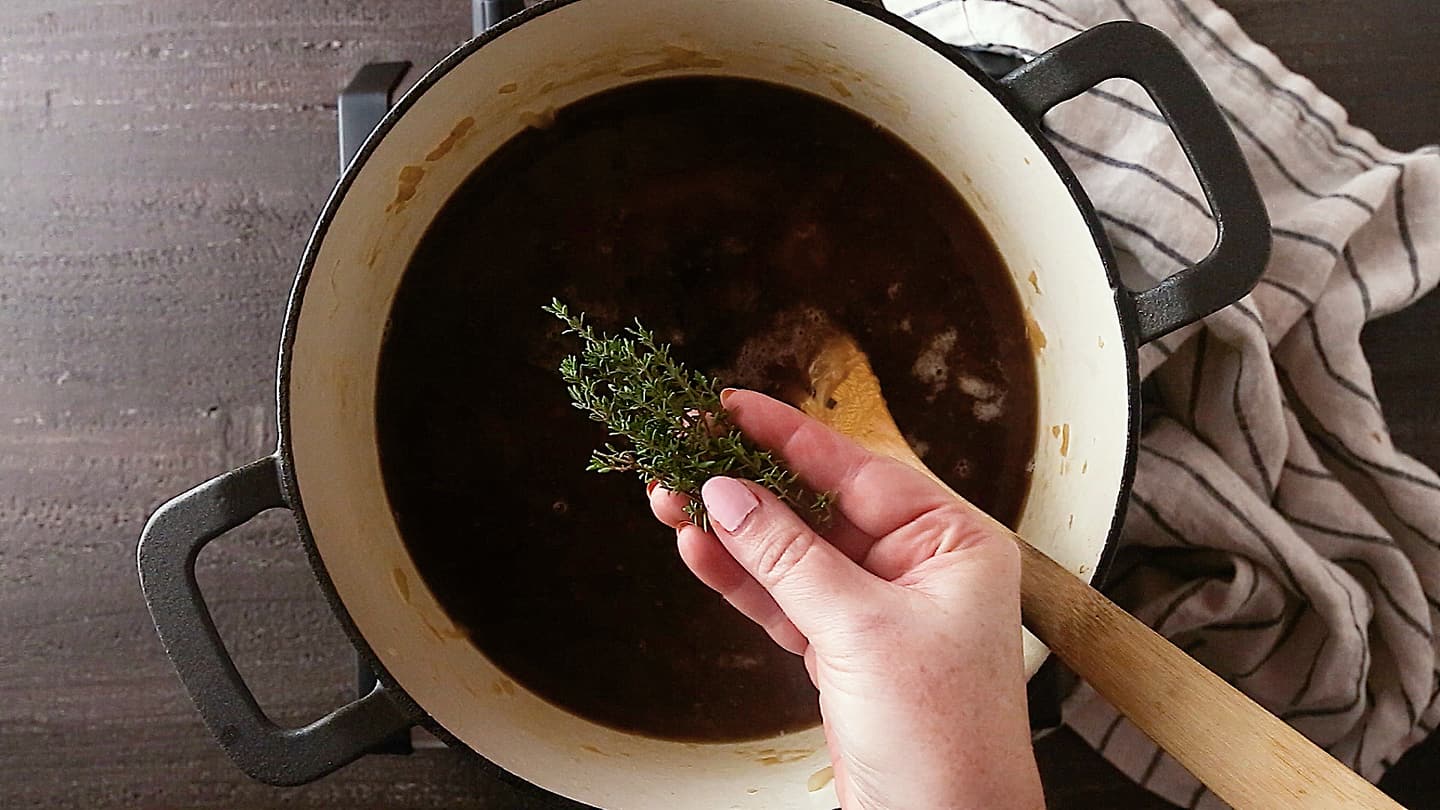 Add in a small bunch of fresh thyme and a bay leaf or two, to bring even more rich flavor to the broth.

Bring the soup up to a simmer, season with salt and pepper, and then ladle it into individual serving bowls. 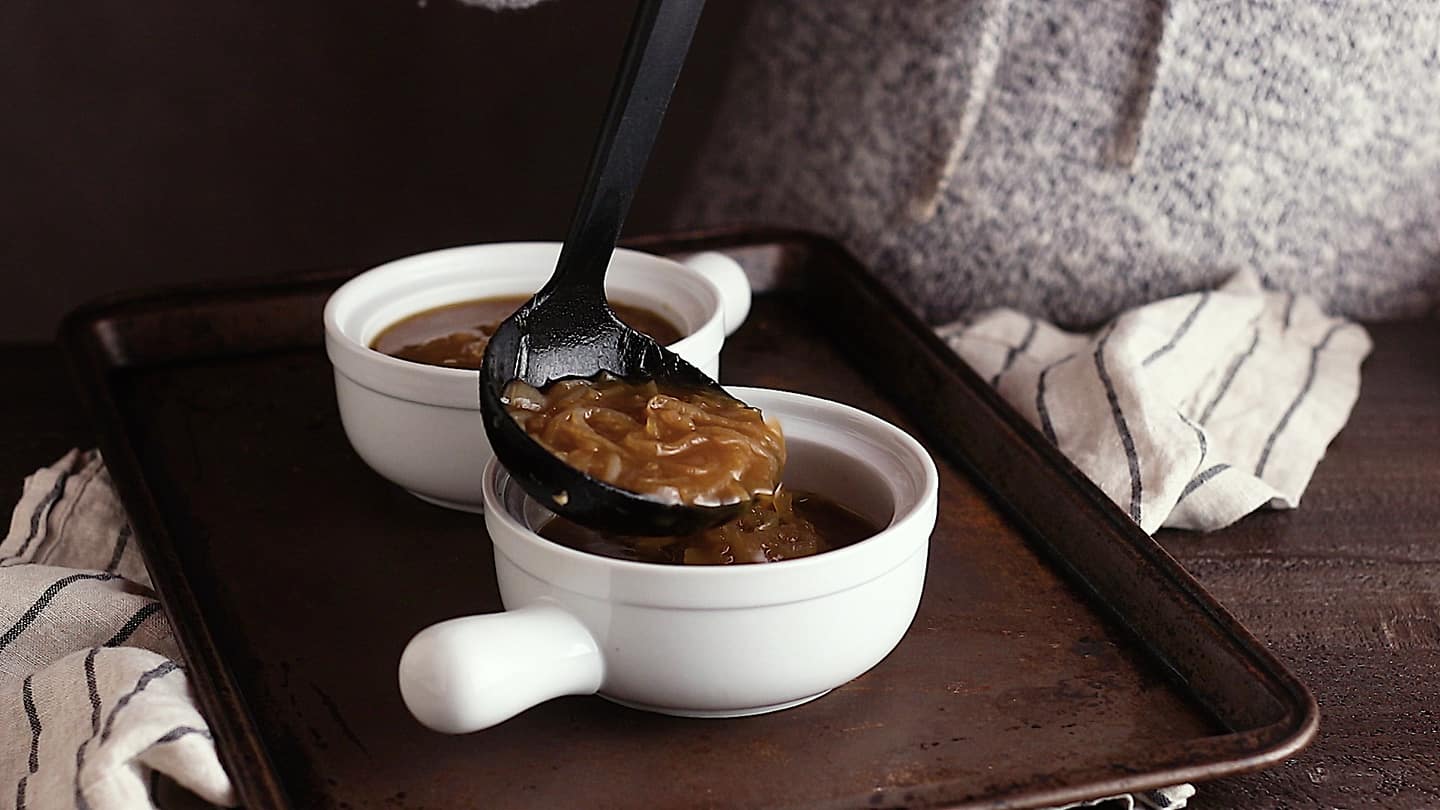 Next, float a few rounds of toasted bread on the surface of the broth. 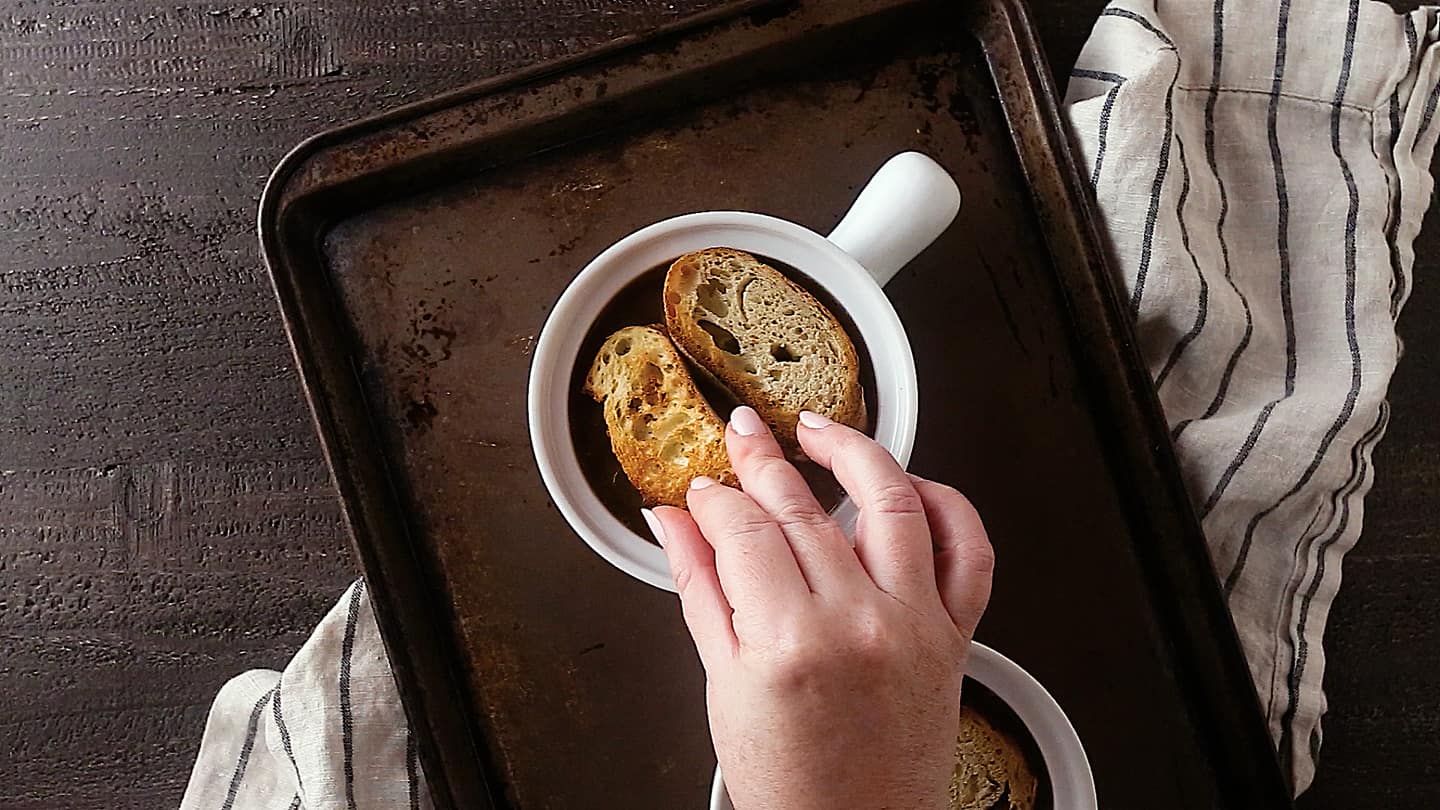 Then comes the best part: the CHEESE! 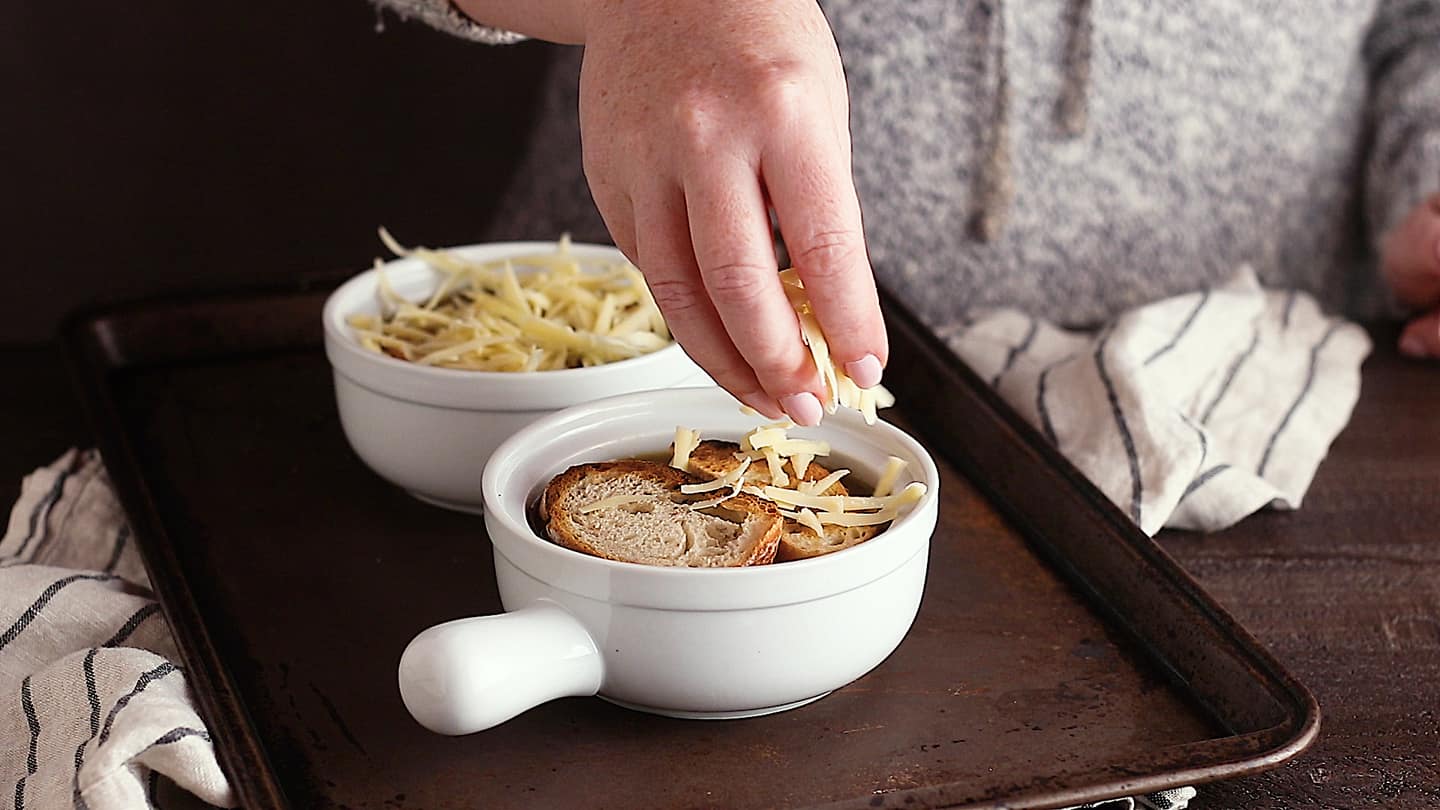 Run everything under the broiler until the cheese is bubbly and browned. So tempting!!

HOW TO MAKE THIS IN A CROCKPOT

This recipe can easily be modified to work in a crockpot or slow cooker.

Caramelize the onions in a pot on the stove, with olive oil, brown sugar, and Worcestershire sauce. Once they’re deep golden brown, stir in the butter and flour and deglaze the pot with wine. Then transfer the mixture to the crock pot and stir in the beef stock, herbs, and seasonings.

Cook the soup on low heat all day, and then when you’re ready to eat, all you have to do is portion it out, top with toast & cheese, and run it under the broiler. Easy as can be!

WHICH WINE TO USE?

You can use any kind of wine you have on hand (red or white), but I especially love to use a fortified wine.

Fortified wines are wines that have spirits (such as brandy) added to them. They have a little more flavor and I love what that adds to this soup.

Marsala, port, vermouth, and sherry are all different types of fortified wines. For what you see here, I used marsala wine, and it was unbelievably delicious!

If you don’t have any fortified wines on hand, you can use regular white or red wine, and just add a couple of tablespoons of brandy. Or not!

WHAT BREAD FOR FRENCH ONION SOUP?

The best kind of bread to use would be a crusty French baguette, because it’s so sturdy it will still have a bit of texture to it, even after it’s absorbed a lot of liquid from the soup. 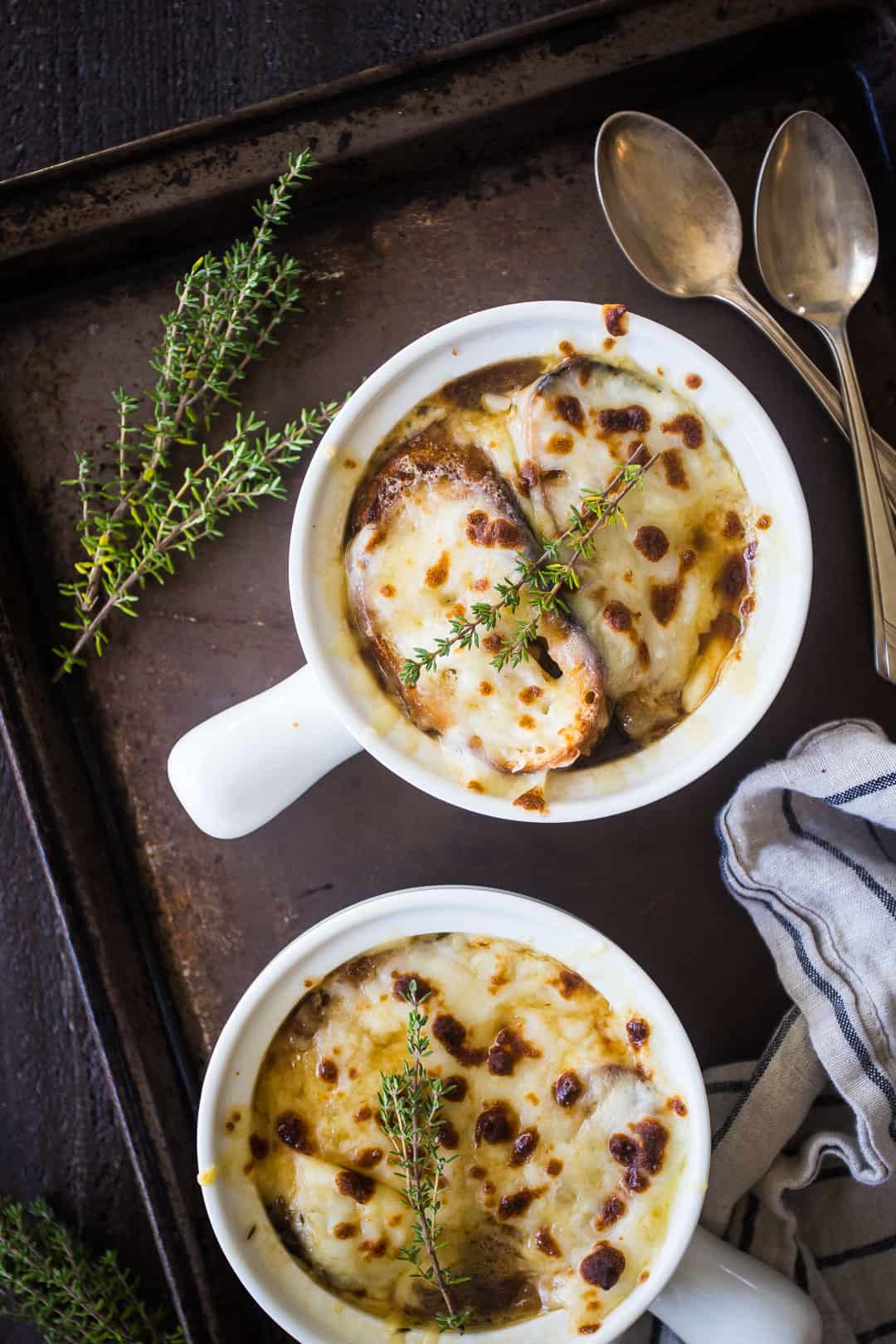 Swiss gruyere is a classic choice. It’s got a little bit of a nutty-sweet flavor, and it pairs beautifully with the caramelized onions.

But to really get that melty, stretchy texture, you’ll want to supplement the gruyere with a little shredded mozzarella.

CAN THIS BE MADE AHEAD OF TIME?

One of the things I love most about this soup is that it keeps getting better, the longer it sits. The flavors meld and marry and it’s just so delicious!

You can make the soup itself several days to a week ahead of time, keep it refrigerated, and then reheat it and add the toppings whenever you’re ready to eat.

CAN YOU FREEZE FRENCH ONION SOUP?

Ladle it into a freezer-friendly container and it will keep, frozen, for at least 2 to 3 months.

Thaw it in the refrigerator, then reheat it in a pot on the stove or in the microwave. Portion it out, add the toppings, and enjoy! 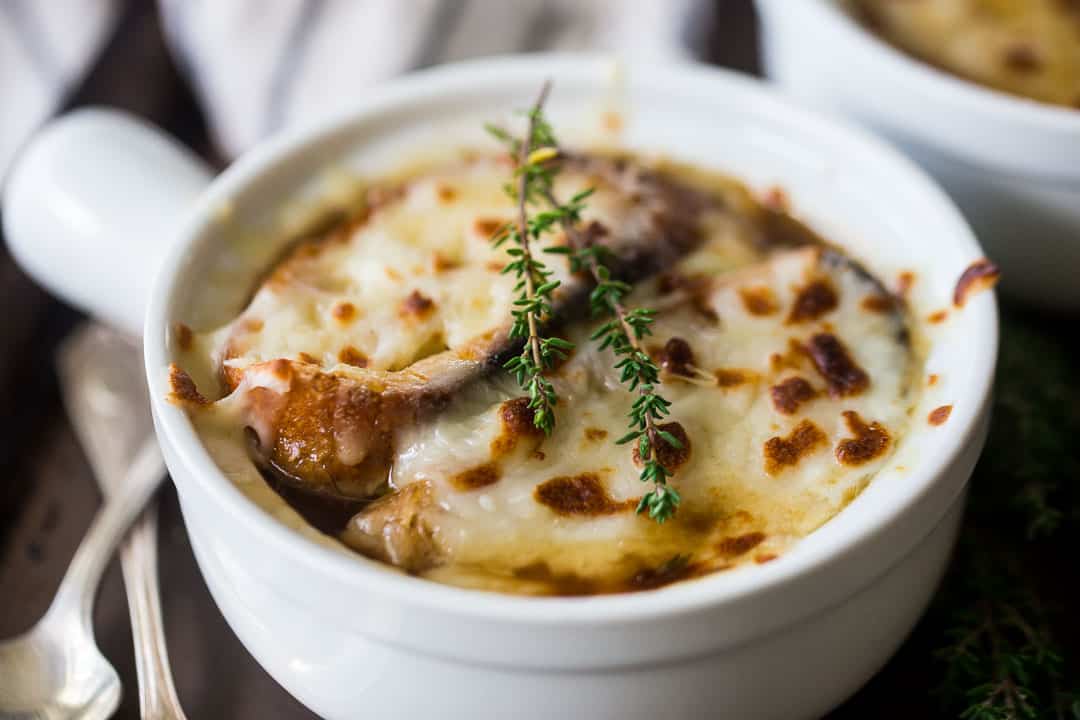 Here are a few more of my favorite savory meals: 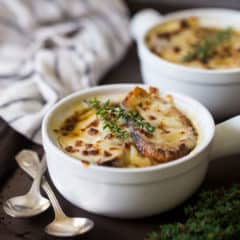 Warm up with a crock of classic French onion soup! With a rich broth full of caramelized onions, toasty bread, & plenty of gooey, stretchy cheese. So good!

*I like to use a sweet onion variety such as Maui or Vidalia, but you can use any kind of onion you prefer.