A crunchy, buttery Graham cracker tart crust is filled with chocolate-y Nutella spread and topped with a marshmallow meringue.  Toast the meringue until it’s crisp and brown on the outside and meltingly gooey inside, for an elegant, no-bake take on the nostalgic s’more. 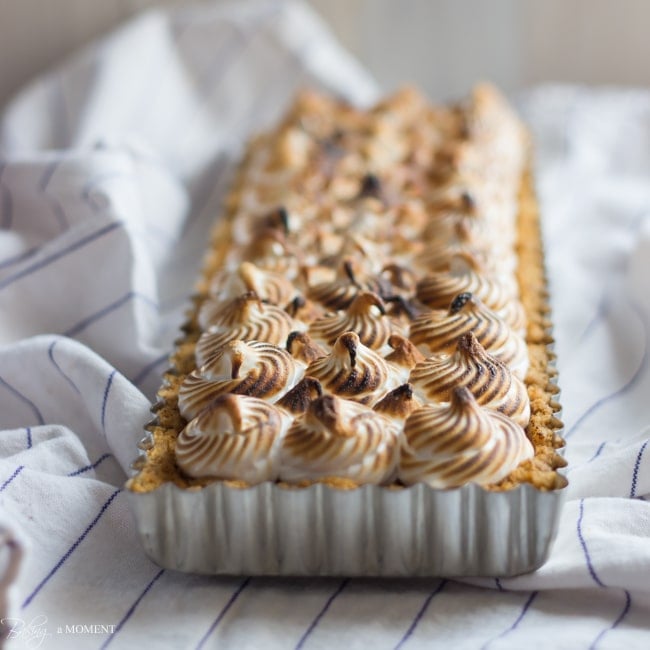 Disclosure: Compensation was provided by the makers of Nutella via Mode Media. The opinions expressed herein are those of the author and are not indicative of the opinions or positions of Nutella.

Hey guys!  I’ve got another great recipe for ya today!

Yesterday’s post got a bit, ahem, wordy, so I’ll do my best to keep this one short and sweet.  I think all I really need to say is “Nutella.” 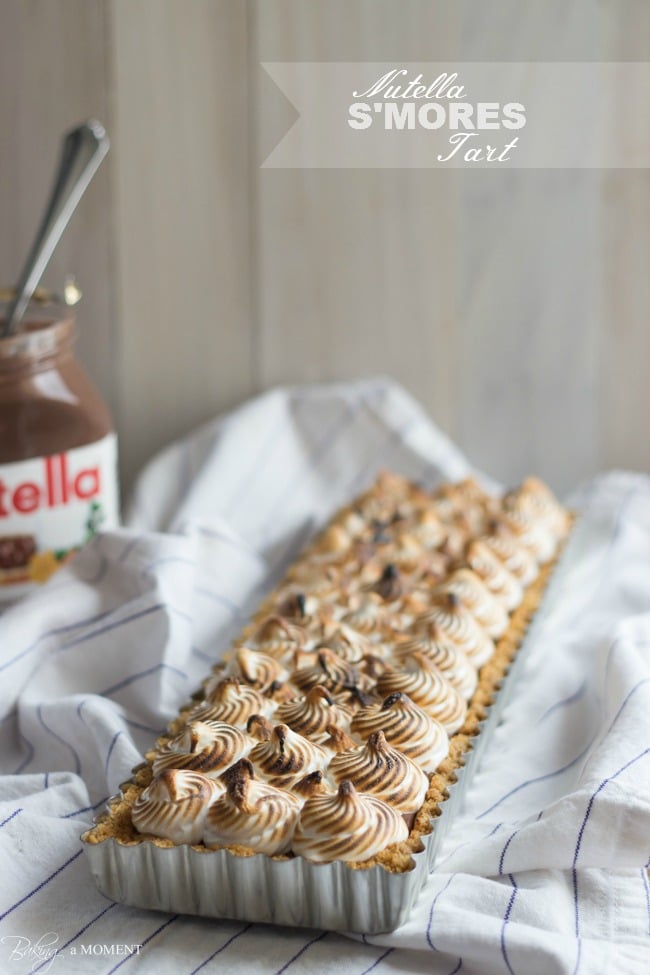 For today’s post I wanted to write about summer memories.  I don’t really have any memories of eating Nutella when I was a kid because I’m old and we didn’t have Nutella back then.  Lol!  Seriously, I had never even heard of it.  I think I would have thought I’d died and gone to heaven if I had permission to eat that sweet, chocolate-y, addictive spread on a whole wheat bagel for breakfast every morning, like my son does.  He really does!  When he wakes up in the morning and I ask him what he wants to eat it’s always the same answer: chocolate bagel.  I guess he’ll grow up with fond memories of Nutella for sure!

One thing I do have a few fun memories of though is s’mores!  Seriously.  Is there anything better in all the land???  I really don’t think there is!  Crunchy graham, fluffy marshmallow, and gooey chocolate.  It’s the ultimate dessert for me.

We do s’mores a lot at my house because my husband loves to do a fire pit and the kiddos always want to toast marshmallows when he does.  It’s so much fun relaxing in the back yard, watching the kids run around catching fireflies, and toasting marshmallows over the smoky fire. 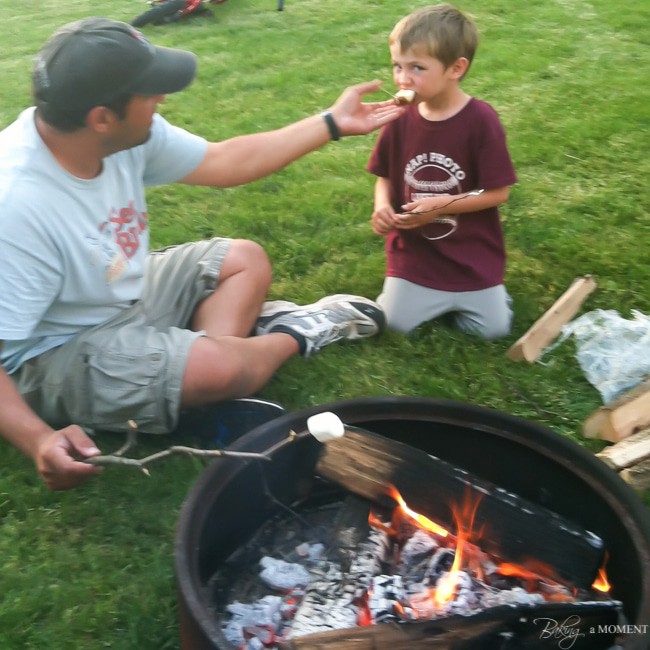 This tart is a great way to recreate those memories all year ’round.  And it’s no-bake (perfect for summer!) and easy-peasy to make thanks to Nutella.

It all starts with a great graham cracker crust.  I always use this recipe .  It’s great.  The perfect ratio of graham to butter to sugar to salt.  And don’t you dare leave out the salt!  The filling is quite sweet so you really need it for balance.  I used my rectangular tart pan but it takes the same amount of crust mixture as a regular pie crust, so I’m thinking the other quantities would probably be interchangeable as well.

Next just spread the happy.  Give it a thick and generous layer of chocolate-y Nutella all over…  I love the way the hazelnut complements the s’mores flavor.  And you don’t have to do a thing to it, just straight up, pure Nutella, straight from the jar.  It makes the most delicious filling, just as-is.  😉 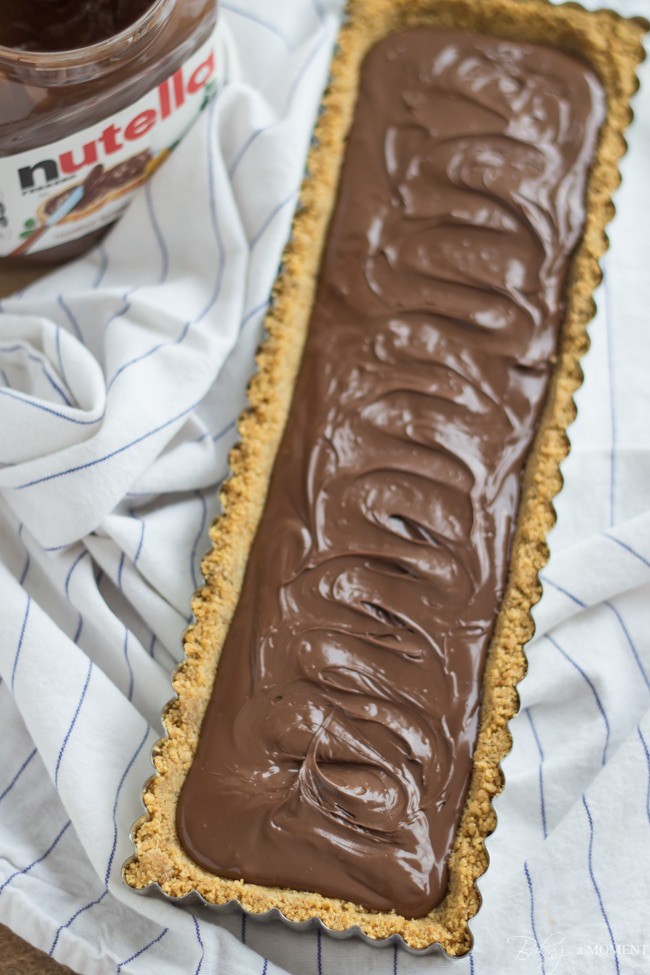 And then whip up a quick marshmallow topping!  This one is actually a meringue made with a hot sugar syrup to cook the egg whites.  It’s super gooey and when you toast it with a brulee torch or under the broiler, it gets that lovely smoky flavor…  MMMMM!

I piped it because I like to be fancy but you could just as easily spoon it on there.  Try to get as many peaks as you can; they get so crisp and brown! 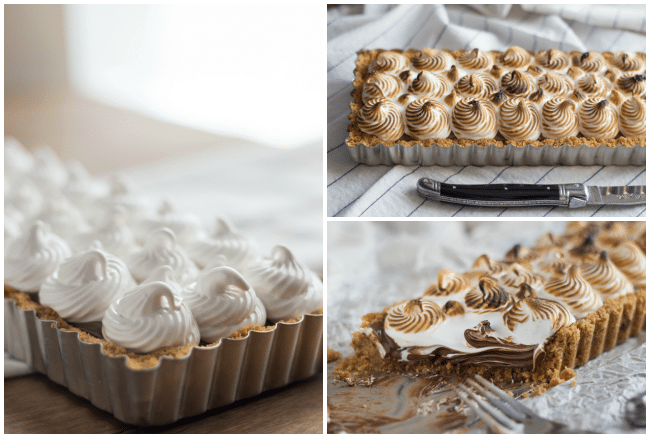 I also just want to mention that I’m participating in a bake sale fundraiser this week, to raise money for autism research.  A batch of my favorite chocolate chip cookies, baked by yours truly, is up for auction.  If you’re interested in helping a great cause, as well as tasting some of my homemade treats, click over to Accidental Intentions to place a bid! 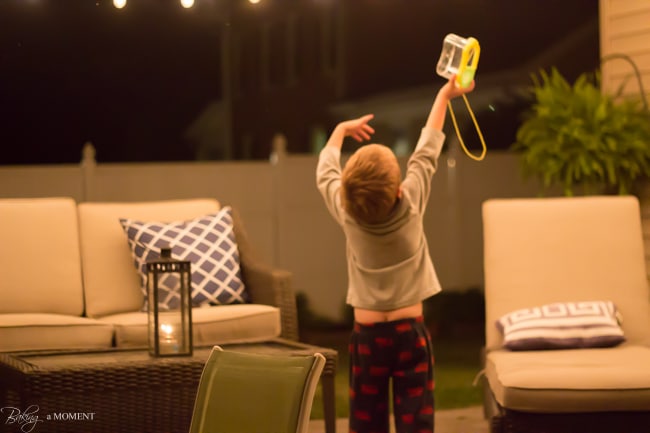 Did you like to chase fireflies when you were a kid?  Did you eat a lot of s’mores in the summertime?  Have you ever tried one with Nutella?

Nutella® hazelnut spread is a happy start to every day! Pick up a jar of Nutella in the spreads aisle and enjoy it with whole wheat toast, waffles, pancakes, strawberries, bananas and many other foods. Nutella. Spread the Happy™. 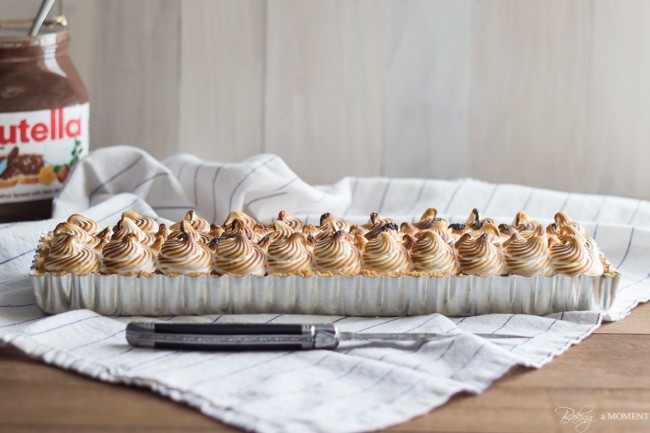 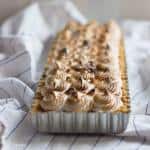 A crunchy, buttery graham cracker tart crust is filled with chocolate-y Nutella spread and topped with a marshmallow meringue. Toast the meringue until it's crisp and brown on the outside and meltingly gooey inside, for an elegant, no-bake take on the nostalgic s'more.