This is THE go-to recipe for homemade graham cracker crust: Buttery and a little sweet, with just a hint of cinnamon. Holds together well and isn’t too crumbly. Perfect for pies and cheesecakes! 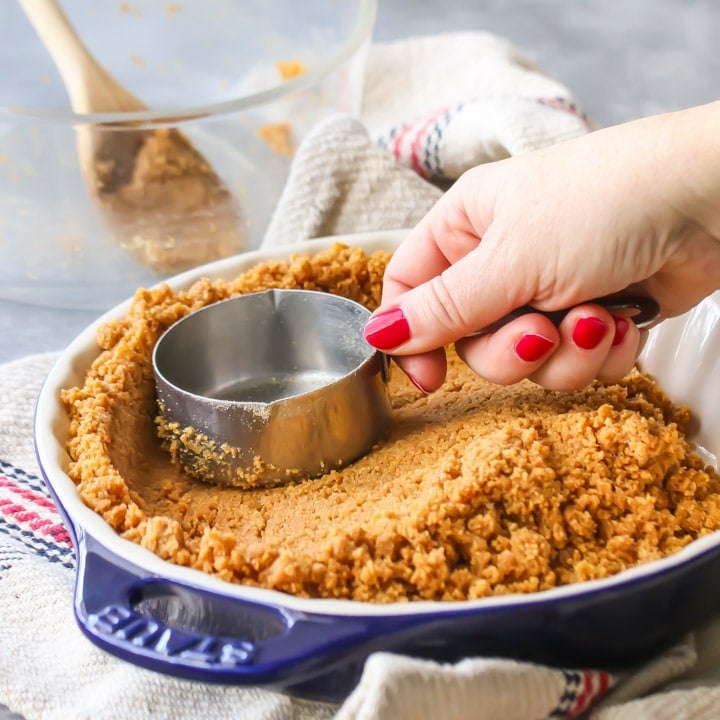 Graham cracker crust is a component in so many of the recipes here on Baking a Moment, I thought it was about time it got its due, with a dedicated post of it’s own!

This crust can be used in tons of different ways, for pies, tarts, parfaits, and cheesecakes. The flavors are perfectly balanced: crunchy, buttery, and just sweet enough, with a hint of warm cinnamon.

And it’s a snap to make (we’re talking like 5 minutes or less)!

Let’s dive right in and learn how to make the best ever graham cracker crust! 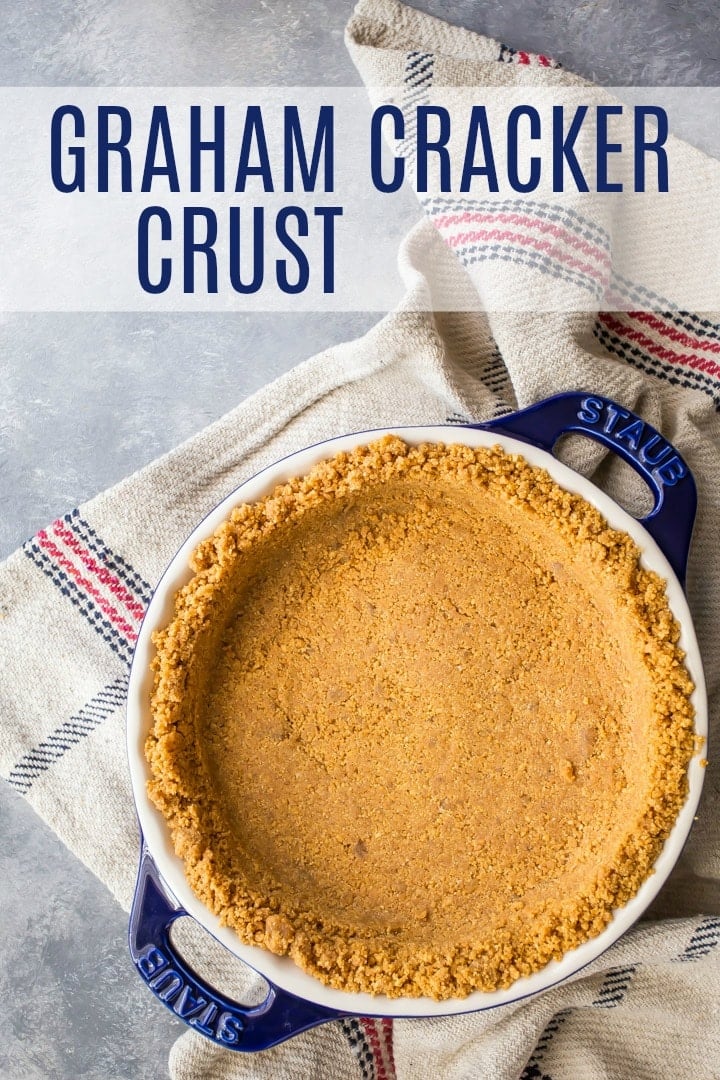 HOW DO YOU MAKE HOMEMADE GRAHAM CRACKER CRUST?

It all starts with just a few basic ingredients. 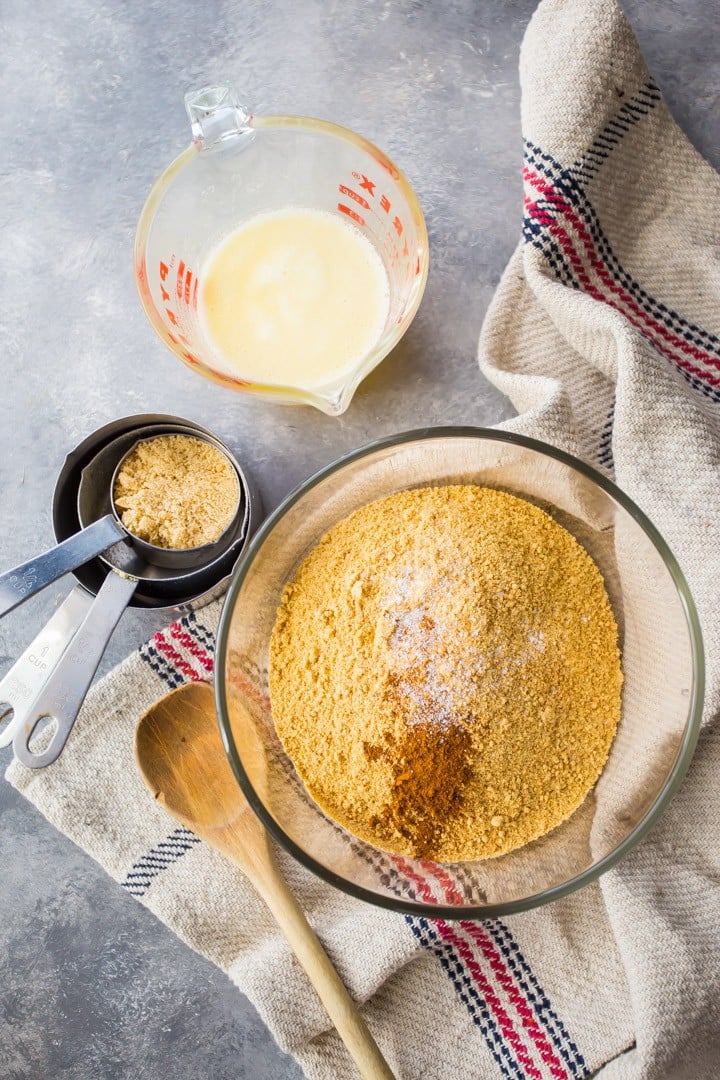 You’ll need a little brown sugar, cinnamon, and salt to flavor the crust. Melted butter will bind it. And, of course, graham cracker crumbs.

I often use boxed graham cracker crumbs, but you can also grind your own crumbs in the food processor. Nine whole (rectangular) graham crackers will yield 1 1/2 cups of crumbs. 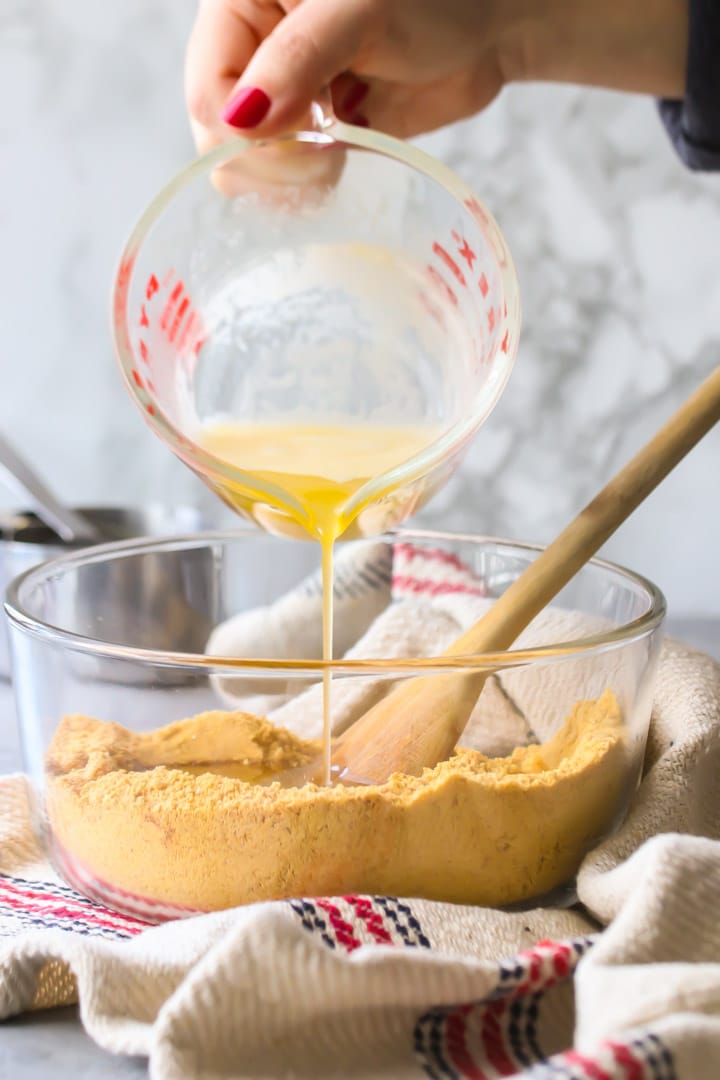 It’s really very simple. Just combine all the dry ingredients in a bowl and then stir in the melted butter. 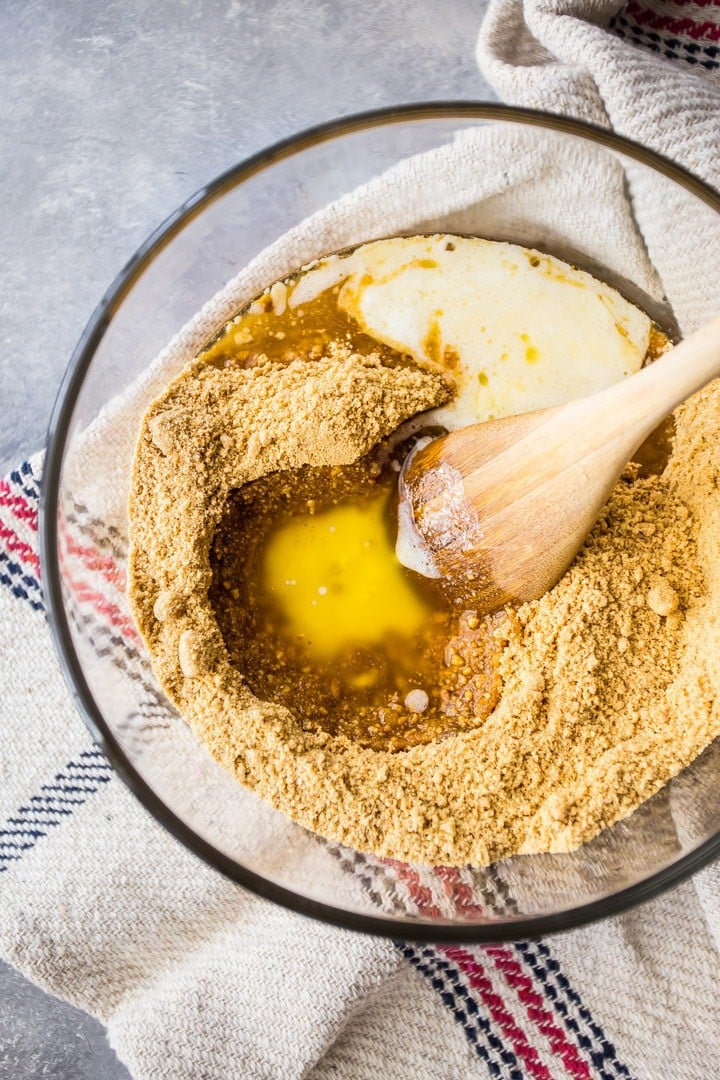 The mixture has a consistency similar to damp sand. 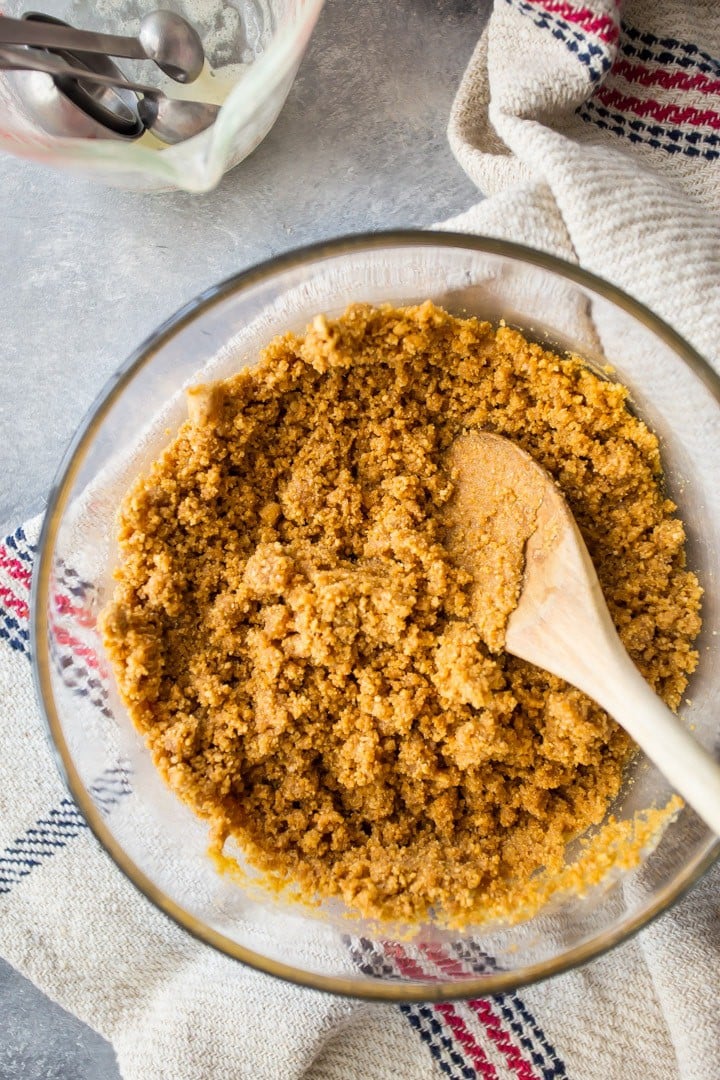 Stir it together until all the graham cracker crumbs are moistened, then, tip it into your pie dish or cake pan. 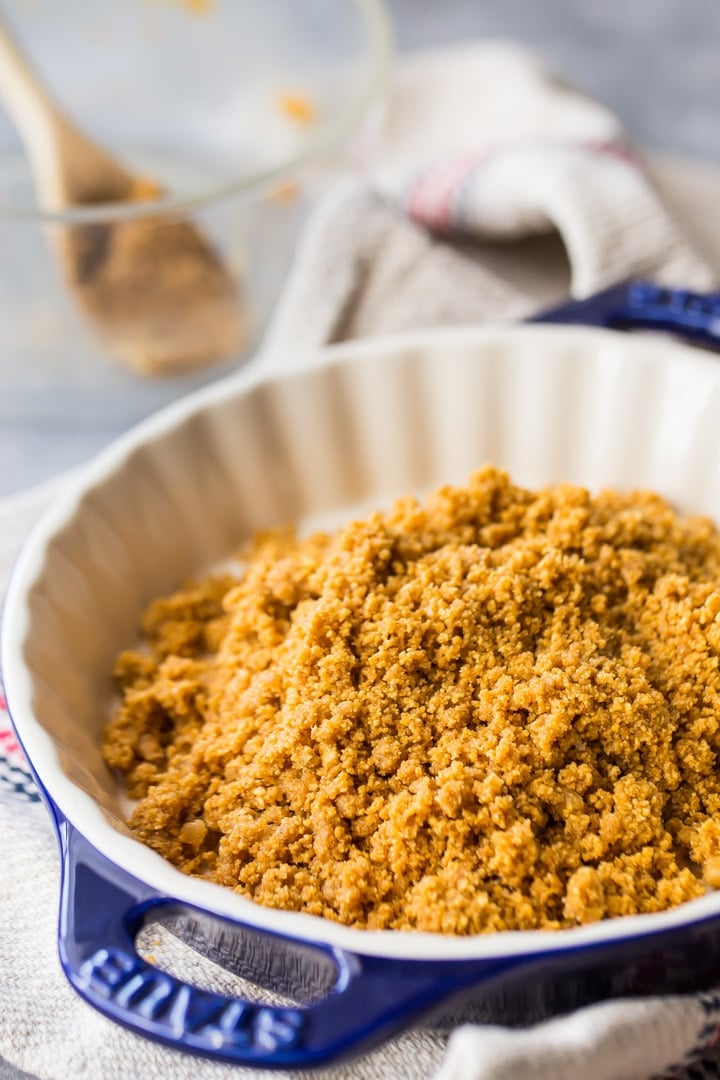 I like to use a measuring cup to press it into place. It’s up to you if you want to go up the sides of the pan or not. 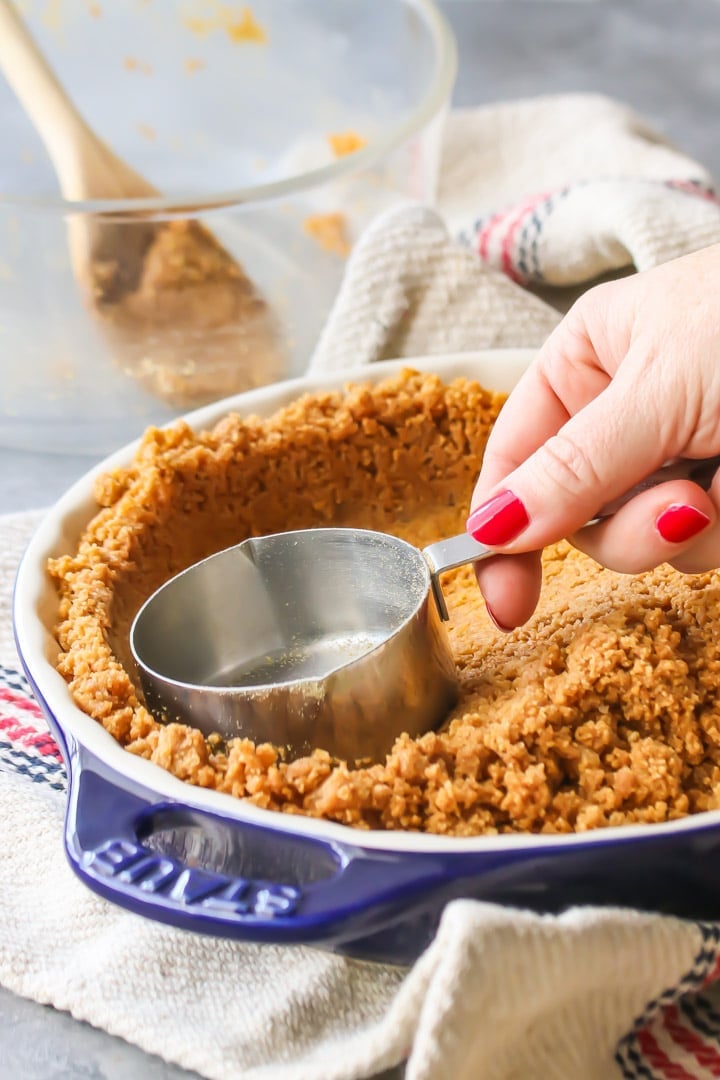 If I’m making a pie, I’ll typically go up the sides, but if I’m making a cheesecake I prefer just one even layer on the bottom of the pan.

SHOULD I BAKE MY GRAHAM CRACKER CRUST?

You can bake it if you want, but honestly it’s not necessary. Homemade graham cracker crust can be baked OR chilled. Both will achieve the same result.

If you bake it, the sugar will melt and then as it cools it re-hardens and sets the crust.

If you chill it, the melted butter becomes firm again and that will also set the crust.

That’s why graham cracker crust is so great for no-bake desserts! I tend to use it a lot in the summer, and I’m sure there will be some great no-bake dessert recipes here in the coming months. Stay tuned!

But first, a word about crumbly graham cracker crust: I have tried some recipes where the mixture is so dry it does not hold together at all. When you slice into the pie or cheesecake, the crust just disintegrates and you’re left with nothing more than some dry crumbs, that don’t even stick to the filling. Needless to say, that is not optimal. So, this recipe has a good ratio of fat to starch, and it holds together very well. Your crust will not fall apart if you use this recipe! 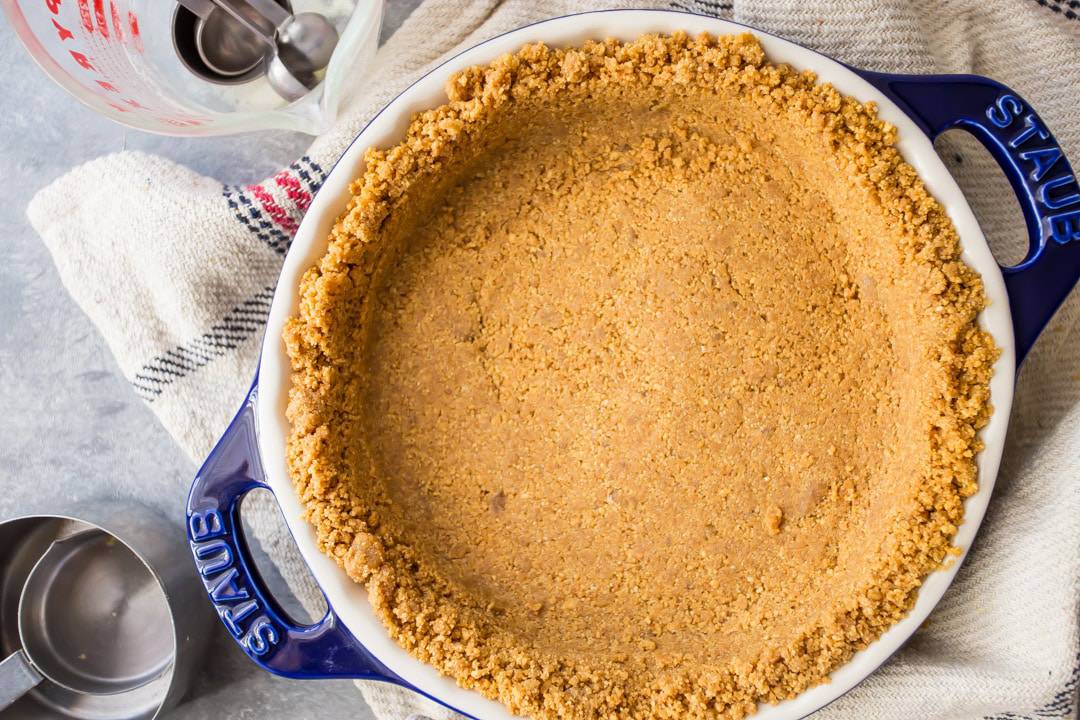 HOW CAN THIS GRAHAM CRACKER CRUST BE MODIFIED?

If you don’t live in the US or can’t get your hands on graham crackers, there are lots of ways this recipe can be modified.

Or you can always just make your own homemade graham crackers. They’re really good and so much fun to make! Click here for the recipe: Homemade Graham Crackers.

However you decide to do it, I’m sure you’re going to love this homemade graham cracker crust recipe. It’s crunchy, buttery, and just sweet enough, with the barest hint of warm cinnamon. Here are a few recipe ideas to get you inspired:

More great pie recipes on my “Pies & Tarts” Pinterest board! 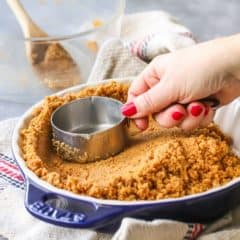 *Use boxed graham cracker crumbs, or place about 9 whole graham crackers in the bowl of a food processor and pulse until finely ground.