Make this easy sponge candy recipe! Whips up in just a few minutes, with the most delightfully crisp, light texture & toasty caramel flavor. 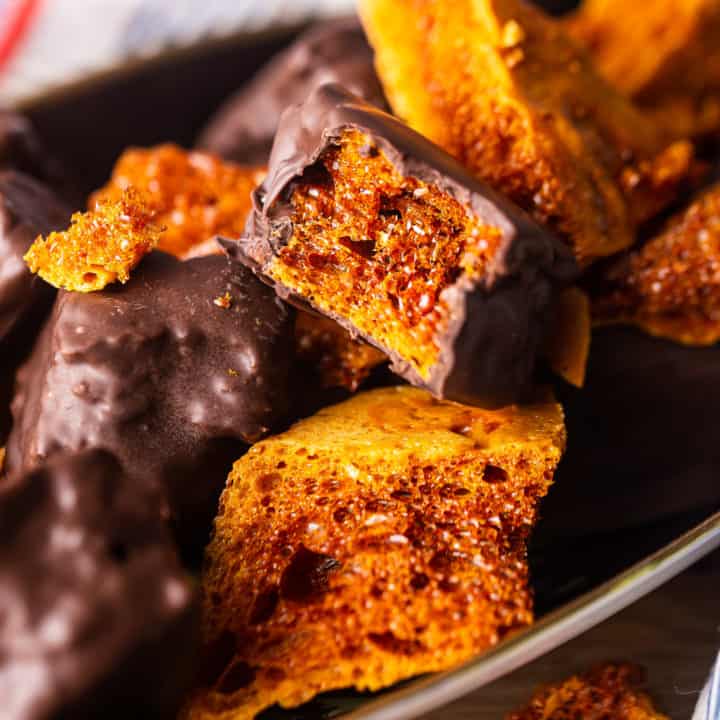 We are soooo close to Christmas, I can hardly believe it!

When it gets to be less than a week away, I like to shift focus to recipes that are quick and easy to make, and that can serve as special homemade gifts. Candy is the perfect thing, and I’ve bagged or jarred up dulce de leche, cinnamon pecans, and Oreo balls more times than I can count, to give to teachers & bus drivers, or as sweet hostess gifts for holiday parties.

This sponge candy recipe is my latest and greatest.

It only requires 5 simple ingredients, and it cooks up in about 10 minutes or less.

And it has the most delightfully crisp, light texture! When you bite into it it’s full of tiny little air bubbles, just like a sponge. The flavor is robust, roasty-toasty and caramel-y, with a slightly bittersweet burnt sugar quality. It reminds me of the crunchy topping on creme brulee, only foamy! 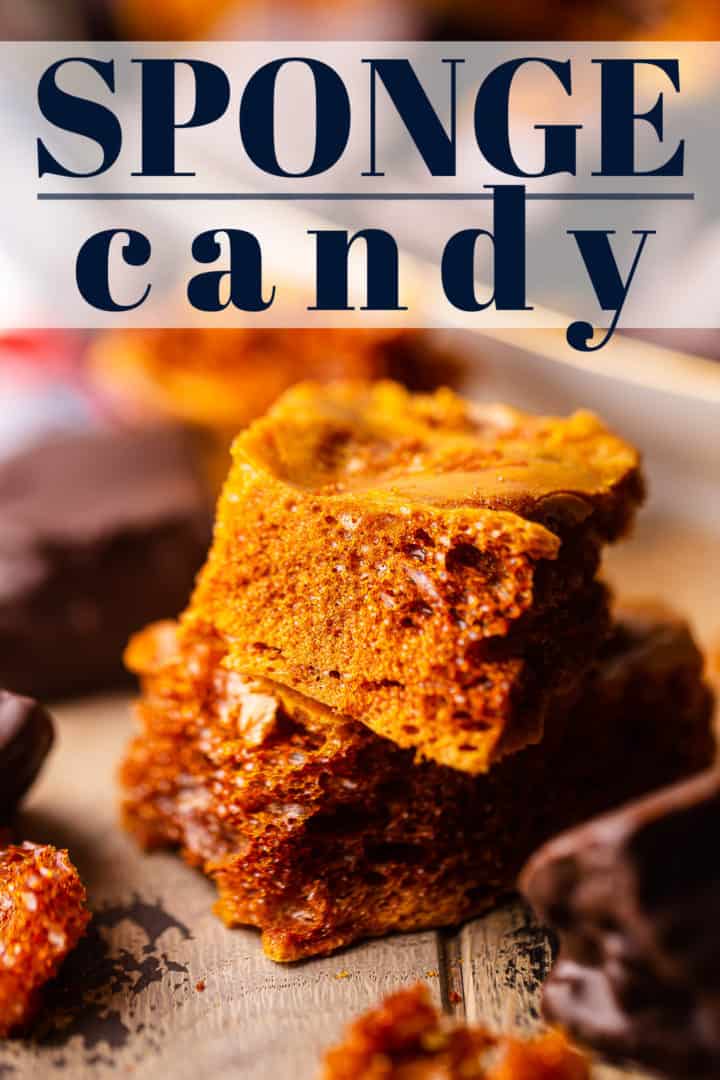 WHAT IS SPONGE CANDY?

It’s got a light, crisp, foamy texture, and it tastes like caramelized sugar.

HOW SPONGE CANDY IS MADE

This recipe is really easy to make with just a few basic pantry staples.

The two main things to keep in mind are: 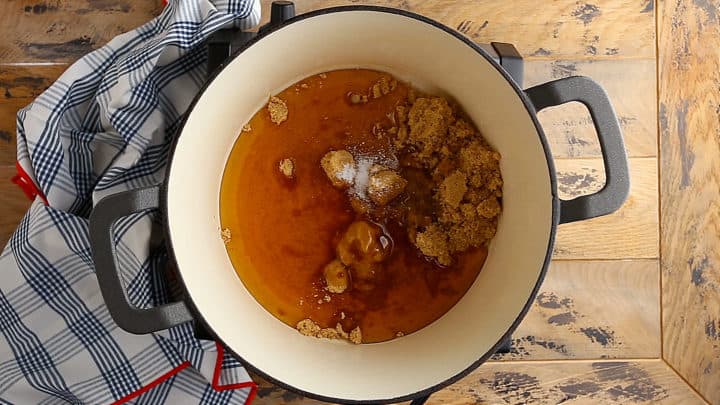 Cook the mixture over medium heat, swirling the pot occasionally to keep the temperature even throughout and to combine the ingredients (it’s best not to stir at this stage). 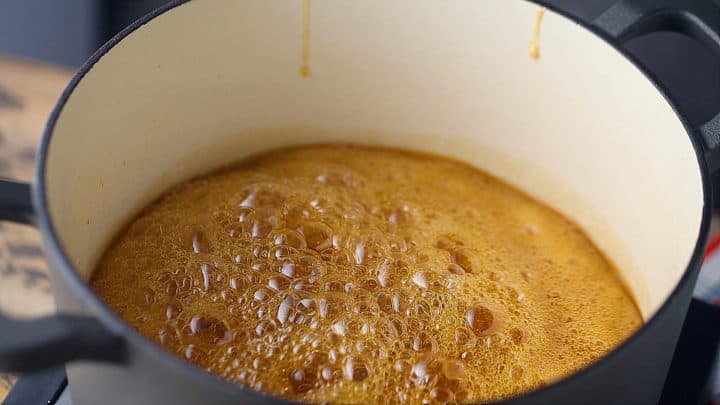 It will bubble and boil as it reaches the hard crack stage: 300 degrees F.

That is the magic temperature! Use a candy thermometer to make sure you hit it on the nose.

Once it’s there you want to work fast. Remove the pot from the heat and whisk in the baking soda. 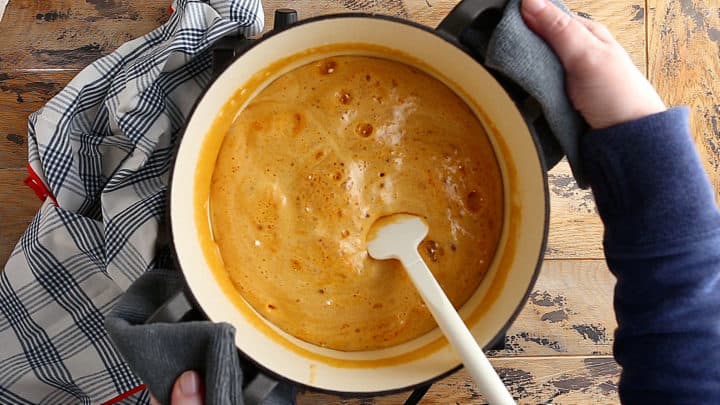 You may notice I used a spatula in the video, but trust me, the whisk worked much better.

It’s magical. The baking soda reacts chemically with the vinegar and foams up and expands (very quickly!) like one of those volcano science projects!

It’s at this point that you want to be very careful not to knock out all those glorious air bubbles. Don’t over stir!

Quickly but gently pour the hot sugar into a parchment-lined 9×13 pan. If it doesn’t reach all the way to the corners of the pan, shake/roll it gently to get it there. Spreading it with a spatula is a little too aggressive and could pop all the bubbles. 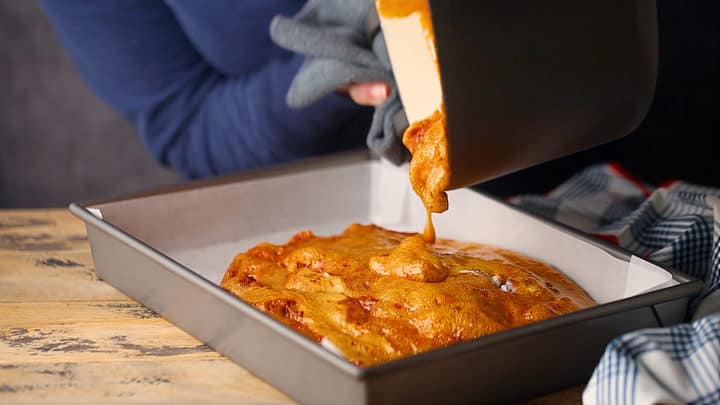 Leave it to cool and harden. This could take anywhere from 1 to 2 hours.

Once it’s cool & crisp it can be broken or cut into pieces and coated in chocolate. 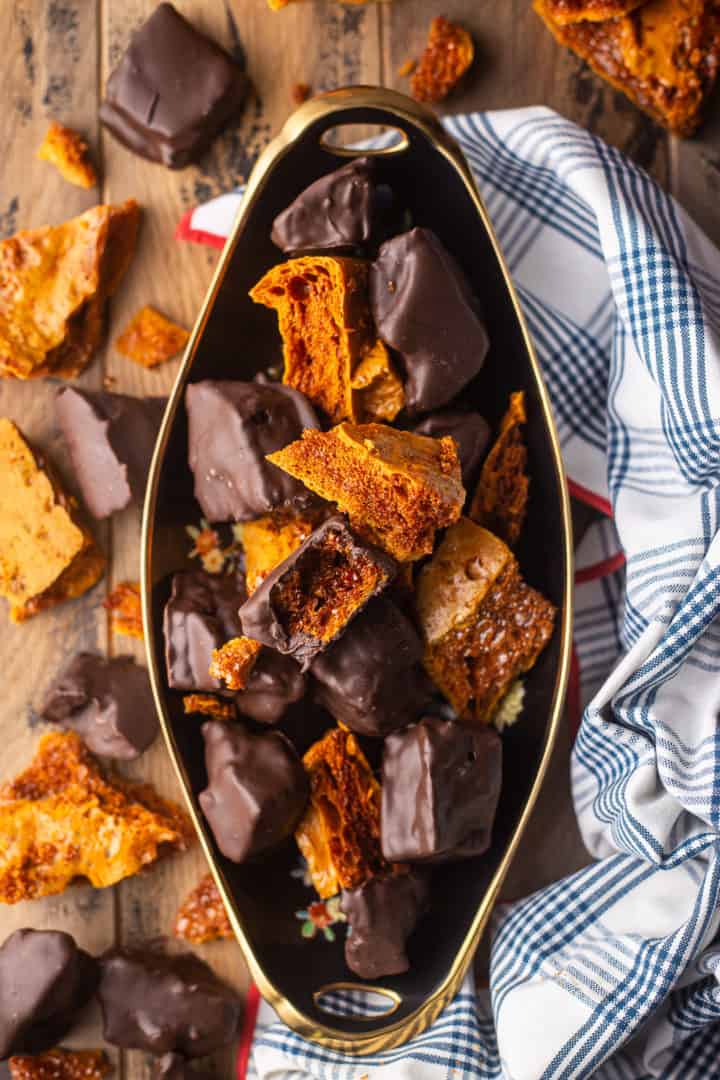 Not only is this recipe gluten-free, but it’s also dairy-free (if you use dairy-free chocolate), egg-free, and nut-free.

It can also be made vegan if you substitute the honey with corn syrup, maple syrup, or something similar.

TROUBLESHOOTING: WHY IS MINE CHEWY?

Speaking from experience here, this is something that can happen if you *just* fall short of that magic temperature of 300 degrees F. The first time I made this, I was a little over-eager, and that’s what happened. Whomp, whomp.

So try again, and this time make sure you cook it just a moment or two longer to make sure it gets to the hard-crack stage. But be careful not to burn it!

CAN THIS BE MADE AHEAD?

You’ll definitely want to make your honeycomb candy ahead, as it needs a good long time to cool.

If you decide to coat it in chocolate you’ll need even longer for the chocolate to harden.

But it can be made several weeks ahead for sure. It’s basically pure sugar. The sugar content is so high that microbes can’t really grow, so it’ll never spoil.

Humidity is your biggest enemy with this candy recipe.

Much like meringue cookies, sponge candy tends to become sticky as it sits. Coating it in chocolate helps, because it creates sort of an air-tight seal, but sooner or later you’ll notice it starts to stick to your teeth.

Which maybe isn’t such a terrible thing?

Keep it wrapped as tightly as possible in an air-tight container at room temperature.

It can also be stashed in zip-top bags and frozen. This is a great way to keep it from going soft and sticky. It will keep in the freezer for up to a year and should be thawed at room temperature. 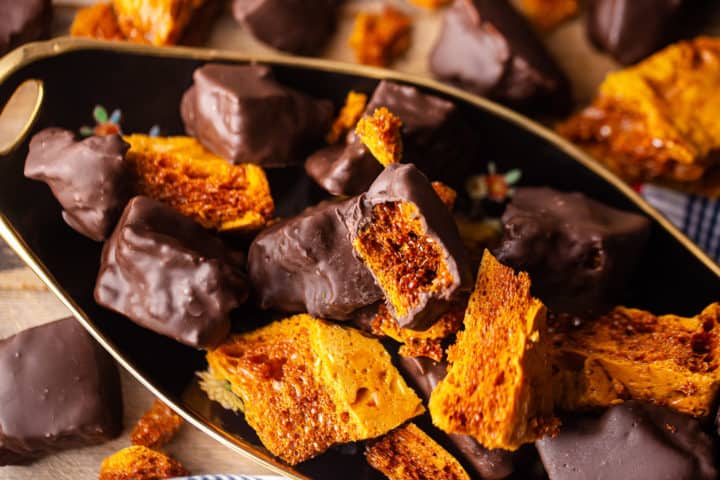 A FEW MORE OF MY FAVORITE CANDY RECIPES:

Make this easy sponge candy recipe! Whips up in just a few minutes, with the most delightfully crisp, light texture & toasty caramel flavor.

*Coating in chocolate is optional.