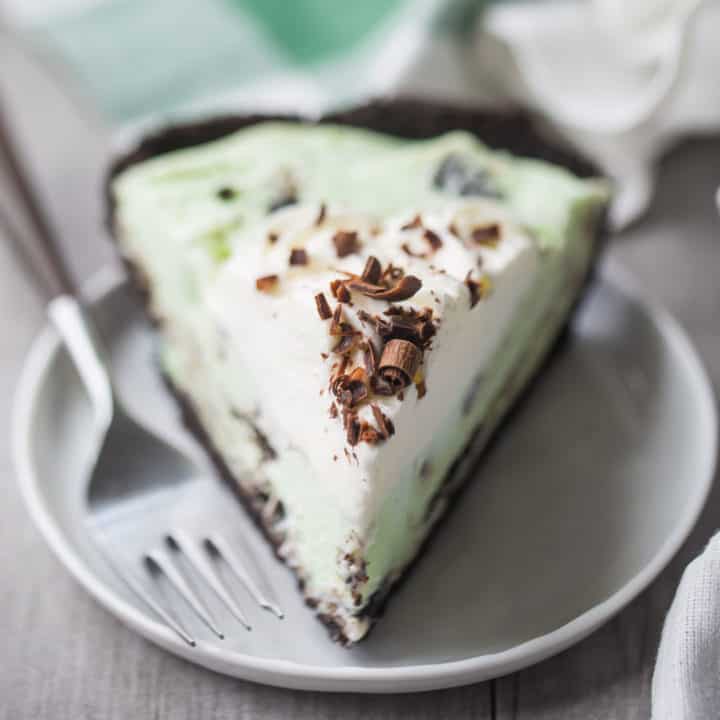 I can’t believe it. He was 4 when I started this website. Where has the time gone? He’s almost as tall as me now.

One of the side effects of being a baker for your kids’ whole life is that they don’t always get super excited about eating cake. It’s not really much of a treat when it’s always lying around. Mine are thoroughly spoiled for sweets and it can be tricky when birthdays roll around.

I offered him chocolate cake and red velvet cake and carrot cake, but he was just kind of “meh” about them all.

But he loves mint, and he loves Oreo. So together, we came up with the idea of making grasshopper pie. Needless to say, it was a big hit! 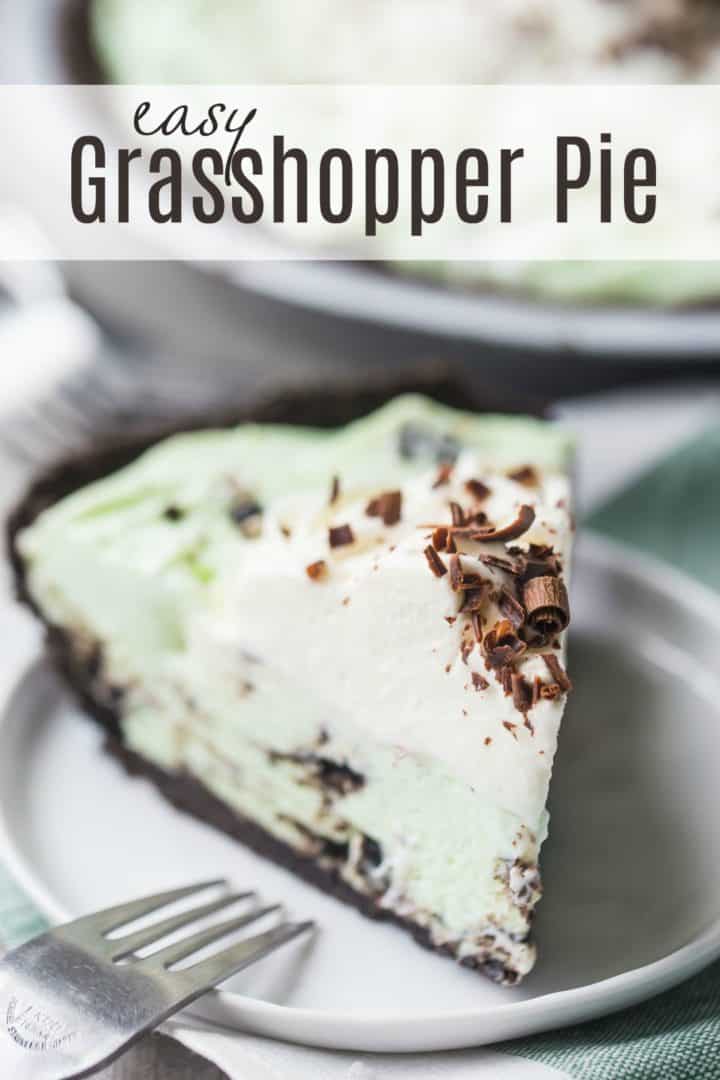 WHAT IS GRASSHOPPER PIE?

Grasshopper pie is kind of a retro classic. No, it does not contain grasshoppers. Lol!

It was originally inspired by a creamy cocktail, invented almost a century ago! The recipe features mint and chocolate; two of the yummiest flavors ever to pair up.

There are all kinds of recipes out there for grasshopper pie, made in all sorts of different ways. I’ve seen some that are made with eggs, some with gelatin, some with marshmallow, and some that are basically just ice cream pies!

But I wanted to keep mine super simple.

It’s got a crunchy Oreo cookie crust, and it’s filled with a fluffy mint mousse. The filling has just 4 ingredients:

I also folded in a drop of green food coloring and a few chopped Oreos, but this is totally optional.

The pie is topped with a mountain of fresh whipped cream, and garnished with chocolate curls. It’s a gorgeous presentation!

DOES GRASSHOPPER PIE HAVE ALCOHOL IN IT?

There are a lot of recipes for grasshopper pie out there that do contain alcohol. After all, the dessert was originally inspired by a cocktail.

However, this one does not. I’m a mom of 2 kiddos, and I want them to be able to enjoy as many of the things I make as possible. So there is no booze in this pie!

That said, if you want to make an alcoholic version, you could add in a splash or two of creme de menthe and creme de cacao. Just be careful not to overdo it, or your pie filling might become too runny!

HOW TO MAKE GRASSHOPPER PIE

I created this recipe kind of at the last minute, on a day where my schedule was already pretty packed, so easy is really the name of the game here! 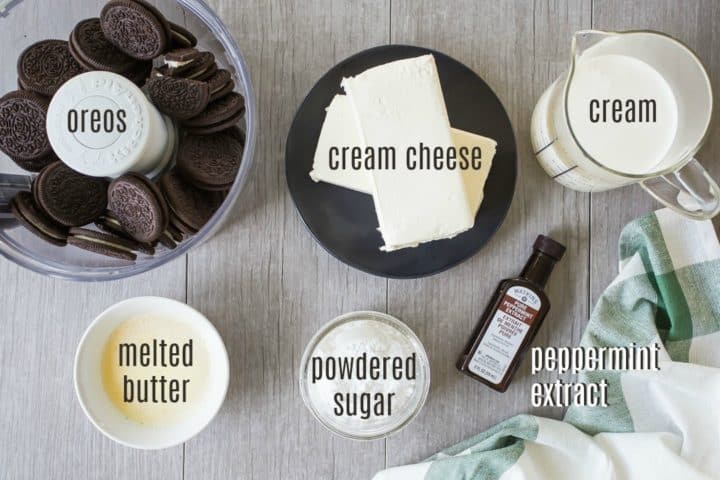 Just a handful of simple ingredients, as you can see above. 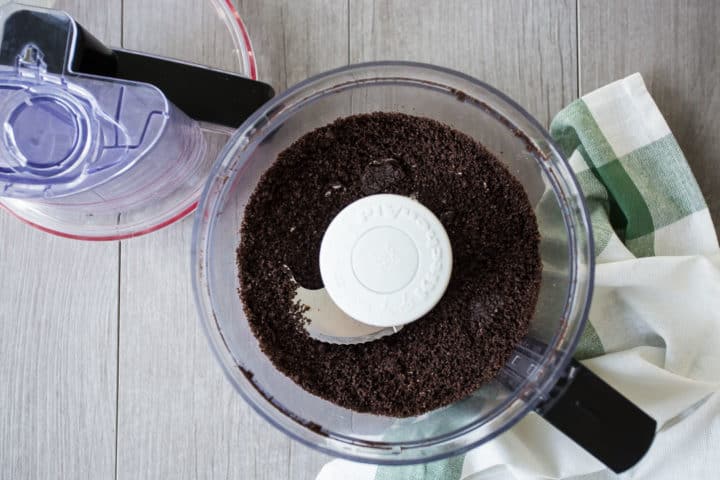 Start with the crust: grind up the Oreos in the food processor until fine. Then stir in the melted butter. 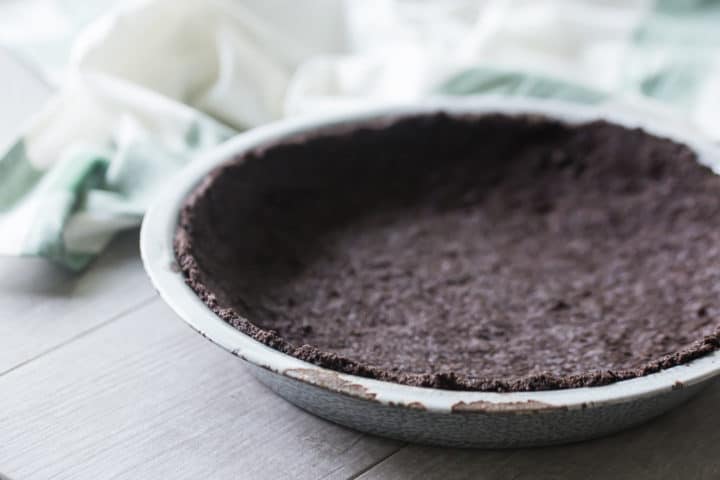 Press this mixture into your pie dish, in an even layer.

Then, get going on the filling. 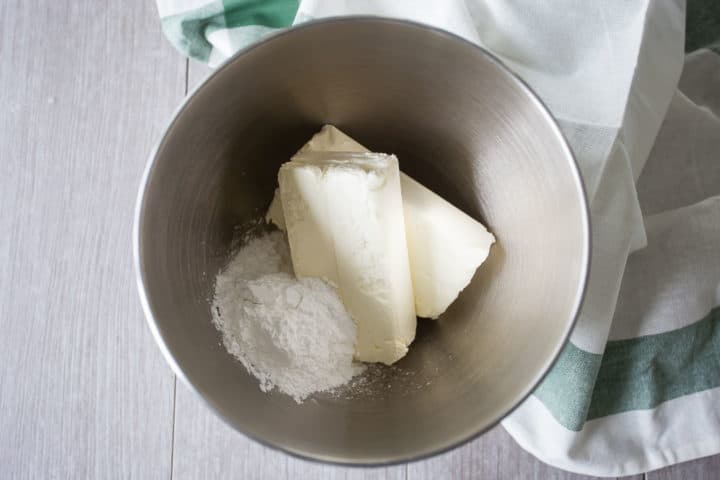 Plop a couple bricks of cream cheese into your mixing bowl and add the powdered sugar. The cream cheese does not have to be softened! It works just fine if it’s straight from the fridge.

Whip these 2 ingredients together until nice and smooth. It should only take a minute or two.

Then, while continuing to whip, S-L-O-W-L-Y drizzle in the cold cream. I’m talking like a tablespoon at a time here. And stop frequently to scrape the bottom and sides of your bowl with a silicone spatula. If you don’t, you could end up with lumps!

Once all the cream has been added, turn the mixer up to high speed and whip the living daylights out of it. You’ll see it get super fluffy and stiff, right before your eyes! 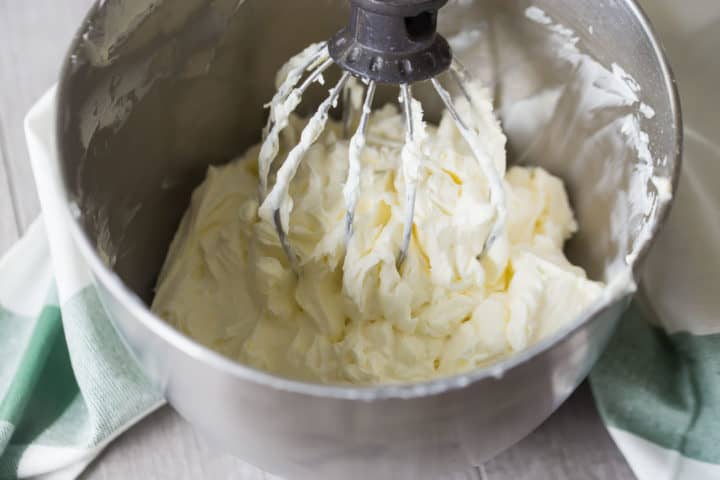 Fold in the mint extract, as well as the green food coloring. 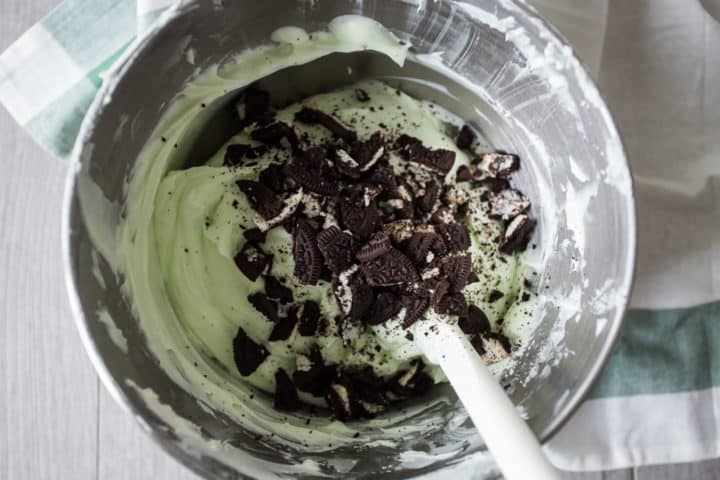 If you want, you can also add in a handful of roughly chopped Oreos too. This is totally optional, but it will give a little added texture and flavor to your pie filling.

Transfer the filling to your cookie crust, and top it with a big mound of whipped cream. Chocolate shavings are the crowning touch!

CAN GRASSHOPPER PIE BE MADE AHEAD?

Grasshopper pie is a perfect make-ahead dessert! In fact, it needs at least 2 hours to chill in the fridge before slicing, so it’s actually much better if you do make it well in advance of serving it.

I would recommend making it the day before your event. But it will keep in the fridge for several days at least. So go ahead and make it in advance- recipes like this one can really take the pressure off! 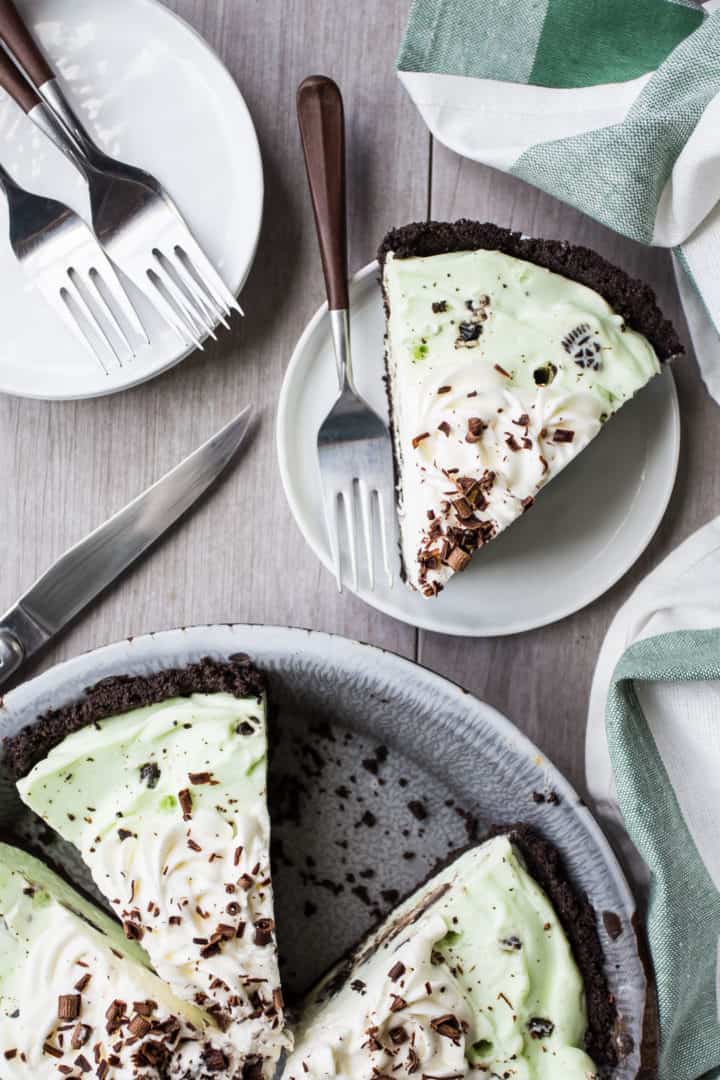 CAN GRASSHOPPER PIE BE FROZEN?

When I set out to create this recipe, I specifically wanted a non-frozen version of grasshopper pie. But if you want to try freezing it, I think it would work well.

Wrap it tightly to avoid it picking up any freezer odors. And it should be good in the freezer for at least a month or two. I have no doubt it would be so refreshing on a warm day! 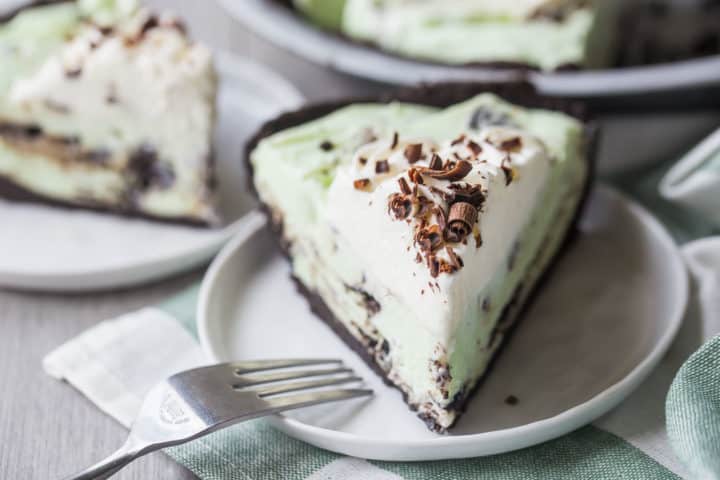 Next time that mint chocolate craving hits, think about making this easy, no-bake grasshopper pie! It couldn’t be simpler to make and it’s so creamy, light, and minty! 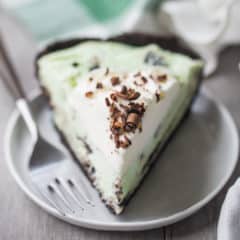 *To make chocolate shavings, run a veggie peeler down the side of a bar of chocolate.