Could there be anything better for fall? Easy cinnamon bread recipe so soft, yeasty, & just a little sweet. So good toasted & buttered! 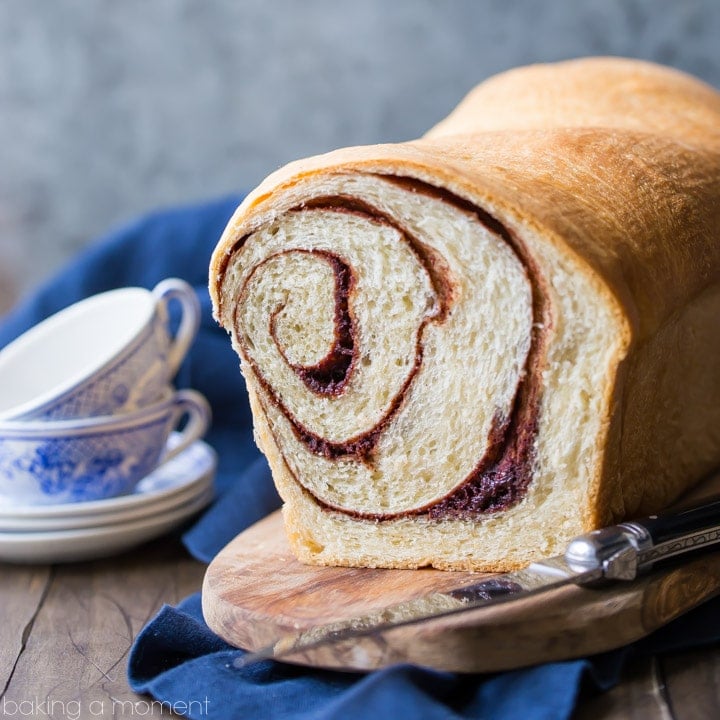 *I originally posted this cinnamon bread recipe on September 12, 2017. I thought it was about time for a refresh. So I’ve simplified the recipe, added a new video, and provided lots more tips for success. Hopefully you’ll enjoy this bread as much as my family and I do.*

It’s Friday, yay! And I’m here to share another fabulous fall recipe with you: Cinnamon Bread!

When fall hits, I’m all about cinnamon-y bakes! I absolutely crave things like zucchini bread, baked oatmeal, and pumpkin roll.

And of course this easy cinnamon bread recipe! I’ve been making it for years and it’s absolutely scrumptious, and bakes up perfectly every time.

It’s yeasty and a little sweet, with the most pillowy-soft, moist texture. There’s warm cinnamon sugar spiraled all throughout, which is just gorgeous but also tastes so good!

I love it toasted and slathered with lots of melty butter, for breakfast with my coffee or tea, or as an afternoon snack with a tall glass of milk. 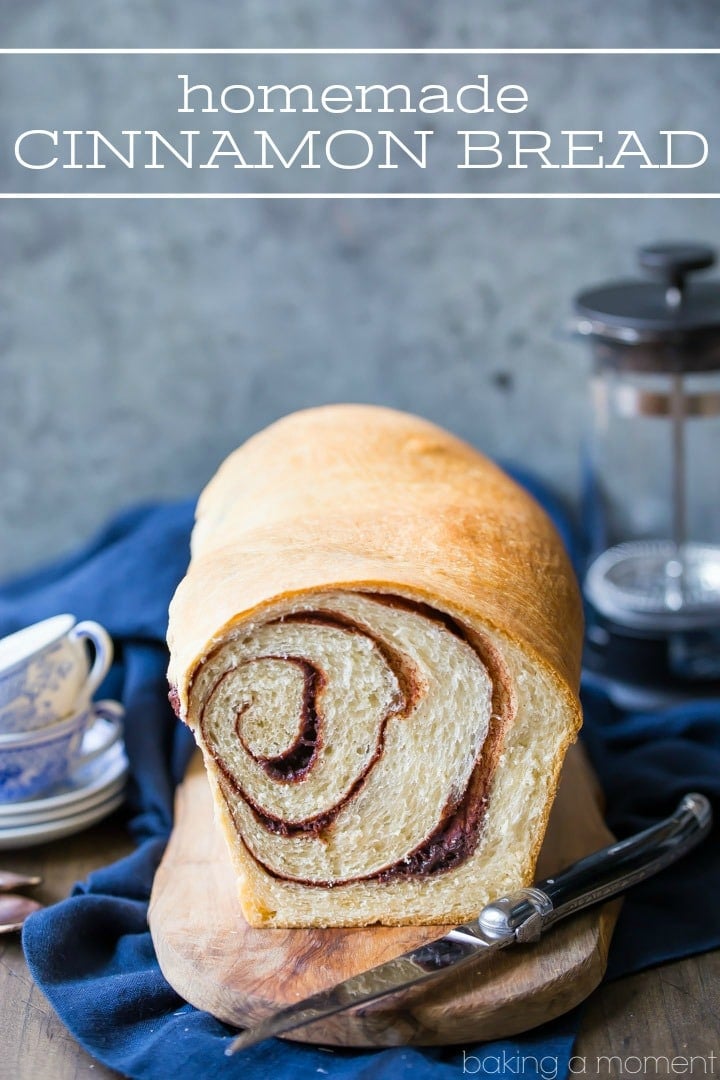 HOW TO MAKE CINNAMON BREAD

Start by dissolving the yeast in warm water. The water should be warm but not hot, like a baby’s bath. It’s definitely possible to kill the yeast in too-hot water, so aim for around 105 degrees F. 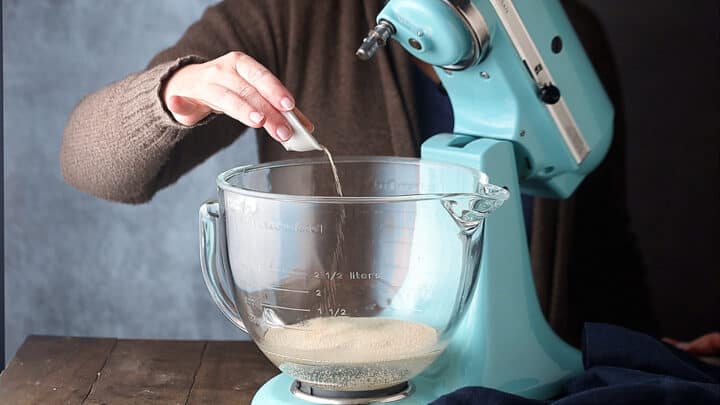 Once the yeast has dissolved and looks a little foamy, stir in the brown sugar, butter, about half the flour, and the salt. 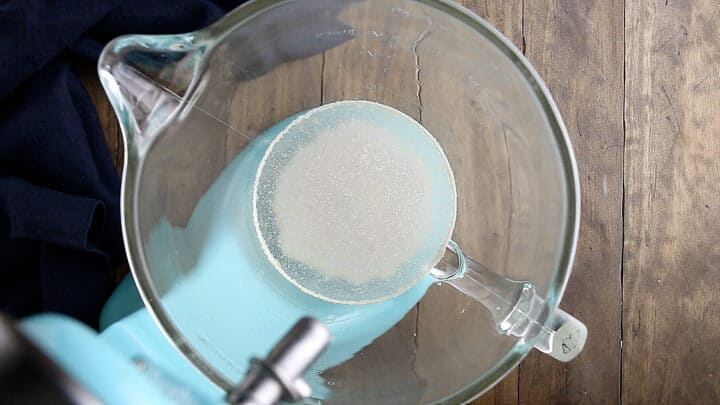 When the mixture looks smooth and all those ingredients are well incorporated, continue to mix in more flour, a little at a time.

The total amount of flour you’ll need can vary based on a lot of factors, but you’ll know you’ve added enough when the dough forms a ball that pulls cleanly away from the sides of the mixing bowl. 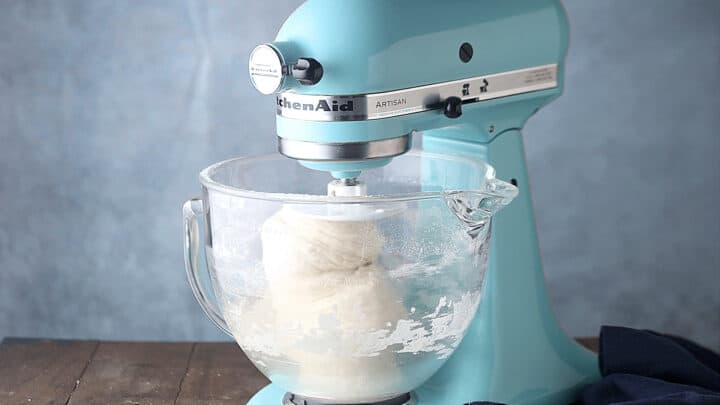 Continue to knead the dough until it feels stretchy and elastic. This usually takes about 10 minutes.

You can do this by hand or let the machine do it. It’s totally up to you!

Next mist your mixing bowl with non-stick spray, pop the dough back in, and cover it with plastic wrap. Find a nice warm spot, and allow the dough to rise until it’s twice its original size. 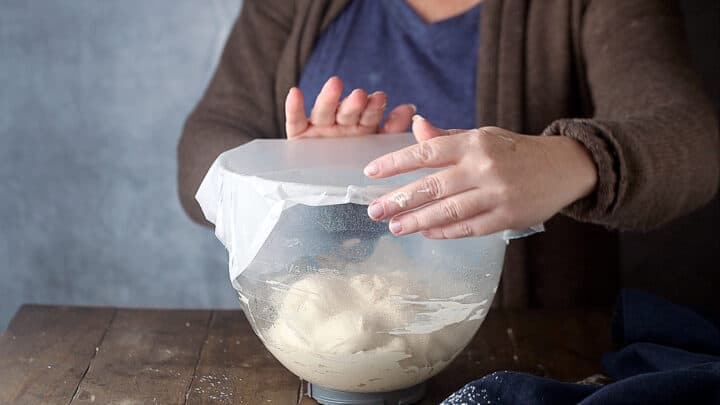 By now your bread dough should be poofy and full of air. 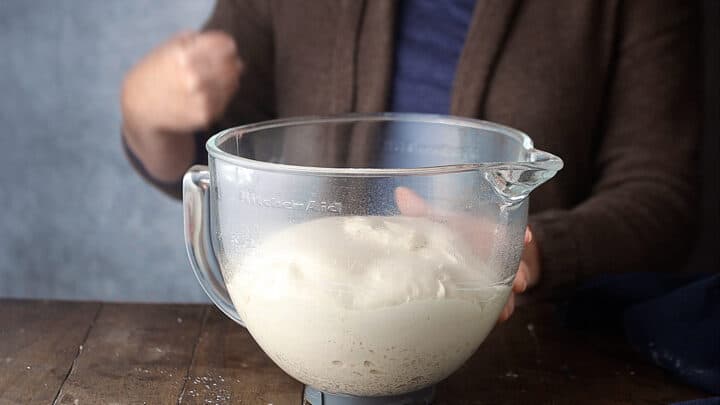 Punch it down with your fist to deflate it, then roll it out on a lightly floured surface.

Don’t get too hung up on the size or shape, it’s not worth stressing about! But it is nice if you can get it somewhat rectangular, and if the short side is the same width as your loaf pan. 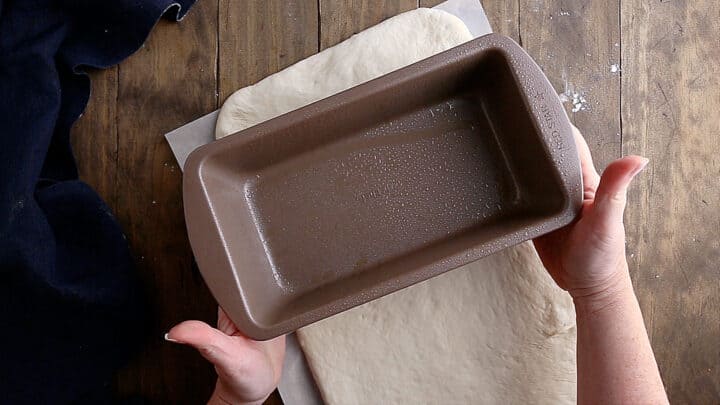 It’s also good to get it pretty thin, which would mean that the longer side of the rectangle is as long as possible. This will mean that your cinnamon spiral is nice and tight, and repeats around several times, so there’s plenty of cinnamon sugar in every bite!

Next you’re going to brush the whole surface with melted butter. 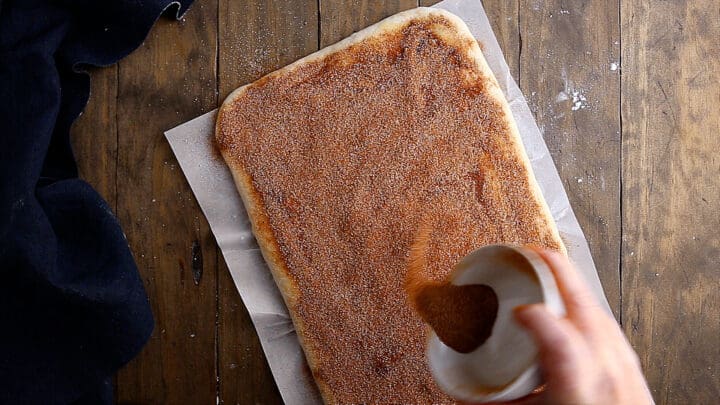 And top that with a thick layer of cinnamon sugar.

If you like cinnamon raisin bread, at this point you can also scatter on about a half cup of raisins. But I know that ingredient can be controversial, so I left them out, lol!

Roll the dough up into a tight log, starting at one of the short sides. 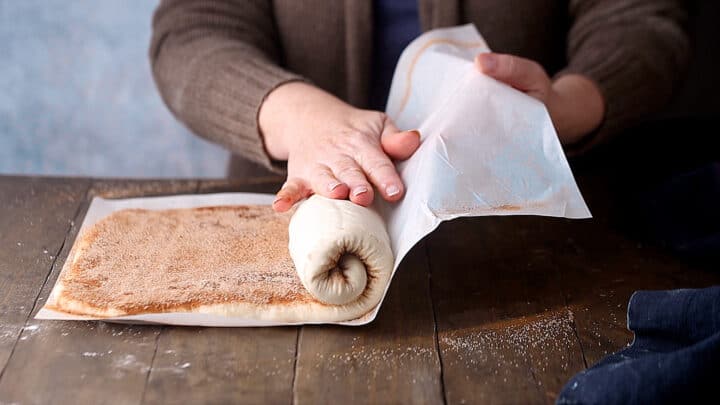 Place it into your greased loaf pan (standard-sized) with the seam side down. Then cover it loosely with plastic wrap and allow it to rise a second time. Once again, you’re looking for it to double in volume. 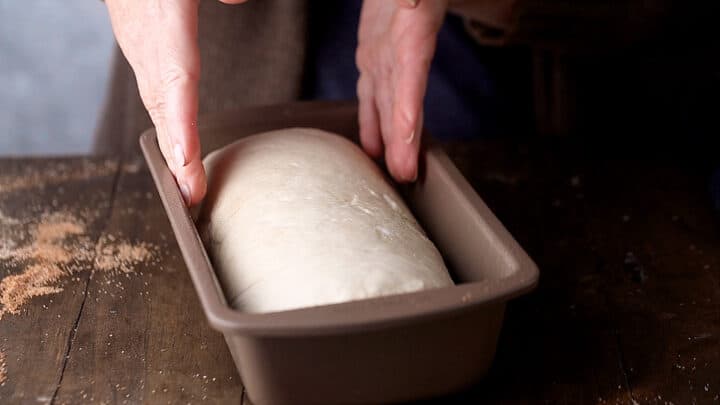 Once the unbaked bread has risen again, pop it into a pre-heated oven and bake it until it’s toasty brown on top and makes a hollow sound when you tap it.

Sometimes it’s nice to break up your bread-making steps over a couple of days. This recipe works really well for that!

Just make your dough according to the recipe instructions, allowing it its first rise, rolling it out, filling it with cinnamon sugar, and rolling it into a log. Place it in the loaf pan and cover it lightly with greased plastic wrap.

But instead of allowing it to rise a second time, pop it into the fridge. It can sit there for up to two days.

When you’re ready to bake it, take it out and allow it to rise in a warm place until it’s doubled in volume.

Then bake it off just as you would normally. 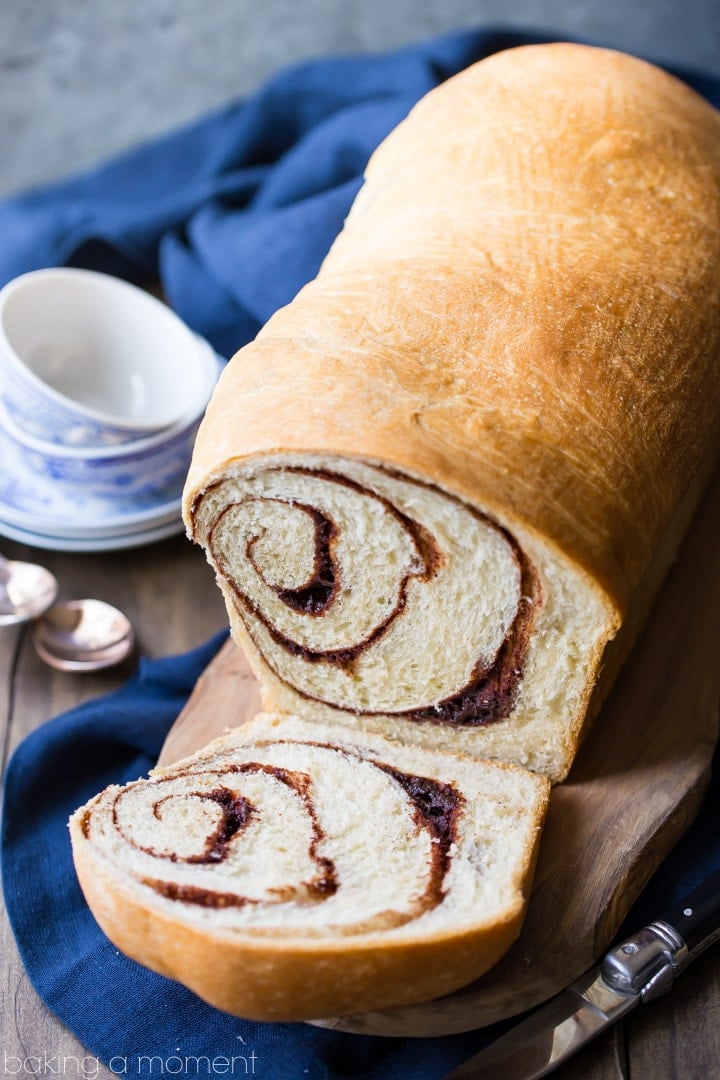 WHAT TO EAT WITH IT

Honestly, this cinnamon bread is so moist and flavorful, you don’t even need to add anything to it. It stands alone just beautifully.

But I do love to eat it warm, so I often toast it and slather it with butter. YUM!

You could also try topping it with:

These are just a few ideas to get your creativity flowing!

IS IT GOOD FOR YOU?

This recipe is made with wholesome ingredients like fresh butter, yeast, flour, and ground cinnamon.

But it is mostly carbs, and there is also some sugar, so you should probably judge for yourself. I’ve included all the nutritional info in the recipe card below.

I can also say that this recipe is naturally egg-free, and if you use a plant-based butter substitute, it’s also dairy-free and vegan.

I’m not really sure how well it could adapt to be gluten-free, but if you’d like to try it with a gluten-free flour blend (make sure it can swap 1:1!) I think it could work. And I’d love to hear about the results in the comments section below.

You could also try swapping out some of the all-purpose flour for whole wheat flour. This usually works well in most of my bread recipes. The only difference sometimes being that you might not need to add as much flour to get the right consistency.

Any time I make homemade bread, I like to store it wrapped up tightly in the fridge. There’s nothing wrong with keeping it at room temperature, I just notice that it typically goes moldy sooner than store-bought bread does. I can only assume that’s because of all the preservatives they add to make it shelf-stable.

We are just a small family of three here, and we can’t finish a whole loaf of bread that quickly. So keeping it chilled helps to extend its life by quite a lot.

It also does really well in the freezer.

If you freeze it already baked, it will keep for several months. It can be thawed at room temp or in the fridge.

You can also freeze an unbaked loaf of cinnamon bread. Complete instructions 1 through 11 in the recipe card below, but instead of allowing the bread to rise a second time, wrap it tightly in plastic and pop it into the freezer. It will last for up to 2 weeks there.

*Pro-tip: You might want to use a foil loaf pan, so your regular loaf pan isn’t tied up for a long time in the freezer!

When you’re ready to bake it, allow it to thaw at room temperature and rise to twice its original volume. Then bake it according to the recipe instructions. 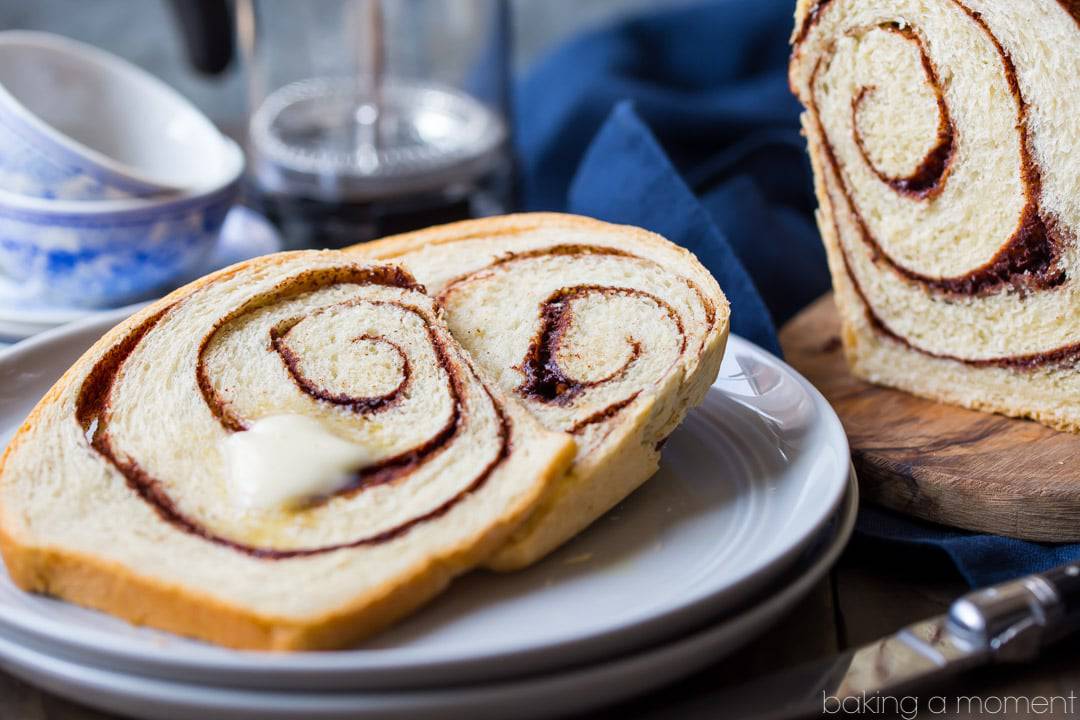 A FEW MORE OF MY BEST BREAD RECIPES: 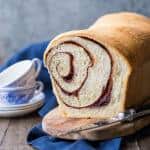 Could there be anything better for fall? Easy cinnamon bread recipe so soft, yeasty, & just a little sweet. So good toasted & buttered!

*Instant yeast may be substituted.  Rise time may need to be reduced by 10 to 15 minutes.  You'll know your dough is done rising when it has doubled in volume.

For cinnamon raisin bread, sprinkle about 1/2 cup of raisins over the cinnamon sugar, before rolling the bread dough into a loaf.

I’m so happy to be writing to you right now- I was supposed to be away all this week for a press trip, but it got cancelled! (Shh- don’t tell any of my clients! I want to surprise them by turning all my deadlines in a week early!) I was originally planning on only being able to share one new post this week, but because of this change in plans, I’m able to bring you this magnificent homemade cinnamon bread recipe today.

Isn’t it glorious? And it’s everything you’d ever want cinnamon bread to be. Soft, yeasty, and a little sweet, with a ribbon of warm, spicy cinnamon spiraling throughout.

When I was a kid, cinnamon bread always felt like such a treat. Most of the time, we only had one kind of bread in the house. It was plain white bread, store bought, and of course that made sense for all the sandwiches and stuff. But every now and then, my mom would pick up a loaf of cinnamon bread and it felt so special! A whole loaf of bread completely devoted to morning toast, lol!

I used to love to eat it warm, slathered with butter. Sometimes it had raisins too, which I adore. But I know they are a controversial ingredient (lol!) so I left them out here. If you are pro-raisin though, you could always sprinkle a half a cup or so over the cinnamon sugar, before rolling up the dough and putting it into a loaf pan to bake.

So home-y and comforting! I can’t think of a nicer fall breakfast!

More great bread recipes on my “Bread Recipes” Pinterest board!