These potato skins are just like you’d get in a restaurant, but better! Loaded with melted cheese, bacon, sour cream, & green onions. 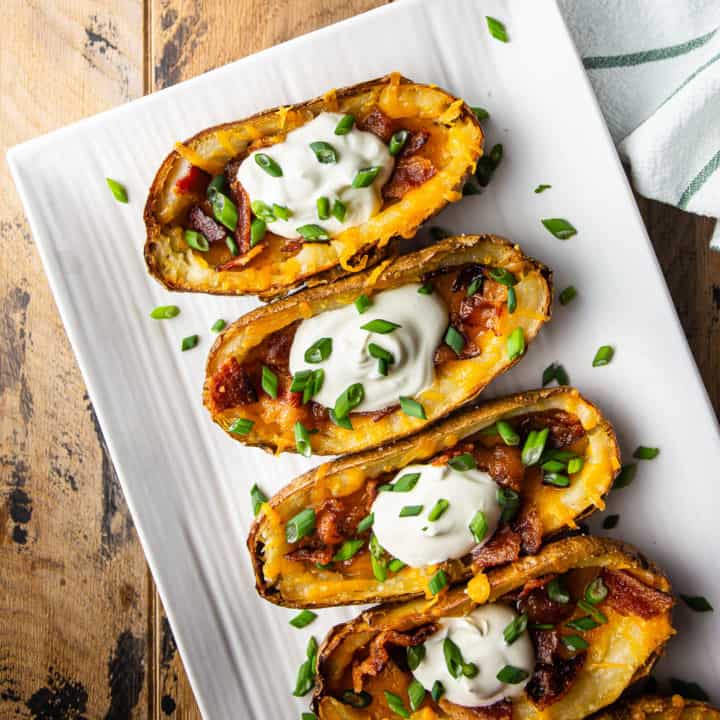 I’m sliding into your inbox today with one more fun Superbowl recipe, just under the wire!

Tomorrow is the big game and as you probably already know, I am all about football food! It’s so much fun to indulge in all the cheesy, crispy, and creamy finger foods and dips!

Just in these last few weeks, I’ve given you my best recipes for jalapeno popper dip, beer cheese, and crispy baked Buffalo wings, and I’m not slowing down one bit!

I could not let tomorrow pass without arming you with one of my absolute favorite appetizers: potato skins!

Whenever I find myself looking at a bar food menu, I can never resist an order of potato skins.

For one thing, I’m Irish and therefore a deep-seated, multi-generational belief that potatoes are the world’s most perfect food exists in my very core. Add gooey, melted cheese, crisp smoky bacon, cool sour cream, and fresh green onions to that, and what more can I say? 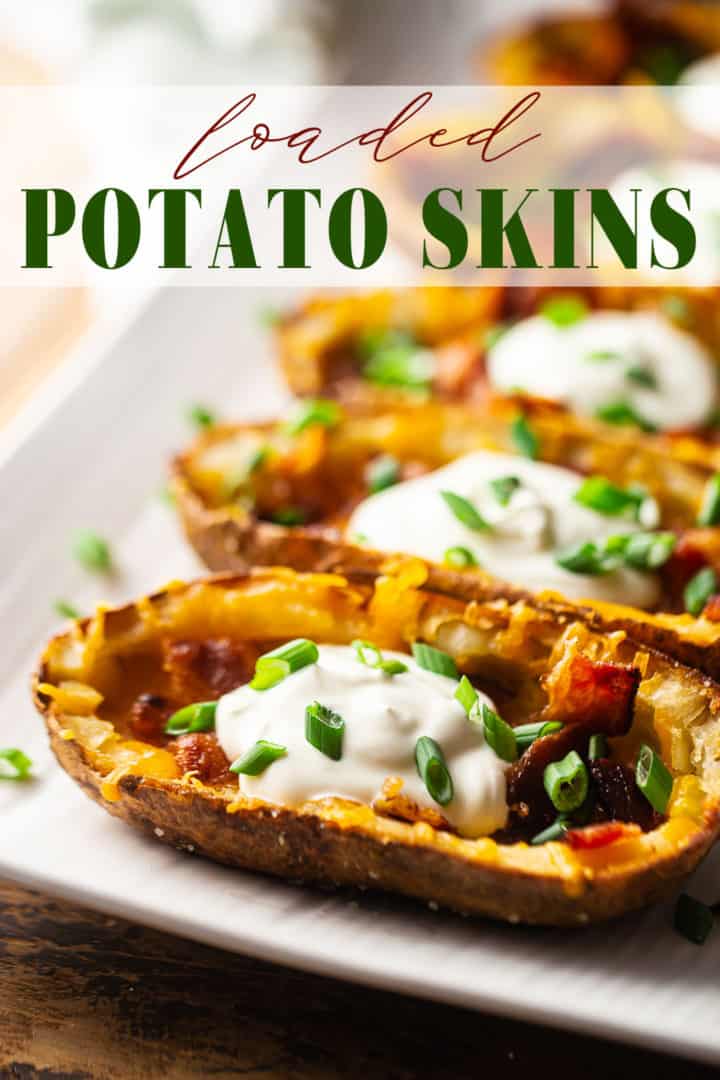 HOW TO MAKE POTATO SKINS

To make this most irresistible appetizer, you first need to bake some potatoes.

Scrub them and prick them a few times with a fork, so the steam can escape. 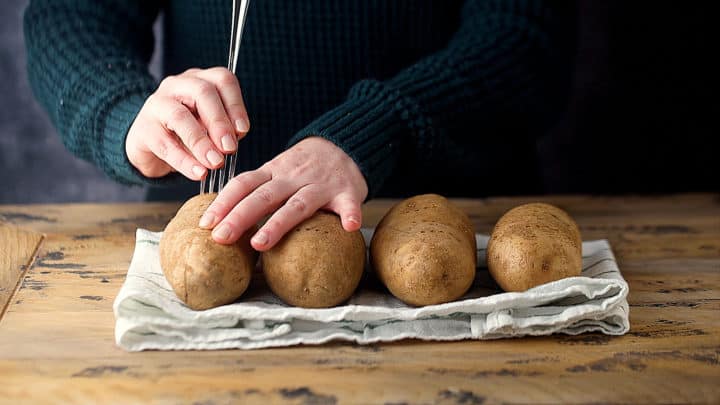 Then give them a nice long nap in a hot oven. It usually takes anywhere from an hour and a half to two hours to get them fluffy and steamy all the way through.

You can do them in the microwave if you’re rushed for time (it will probably take less than 10 minutes on high power), but I prefer the oven because it really crisps the skins in the most delicious way.

Once the baked potatoes are cool enough to handle, slice them lengthways and scoop out their middles. You’ll want to leave about a 1/4-inch wall around the edges and on the bottom, for structural integrity 😉 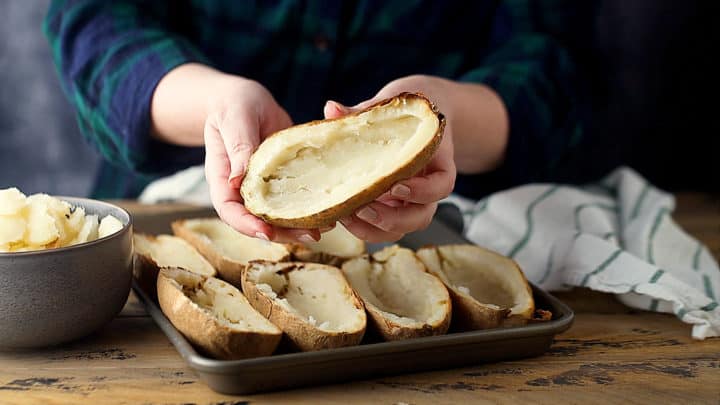 You can see exactly how this is done by watching the video embedded within the recipe card below.

Discard the insides, or save them for another use.

Then brush your potato boats, outside and in, with oil, and season them liberally with salt. Potatoes can take a good amount of salt! 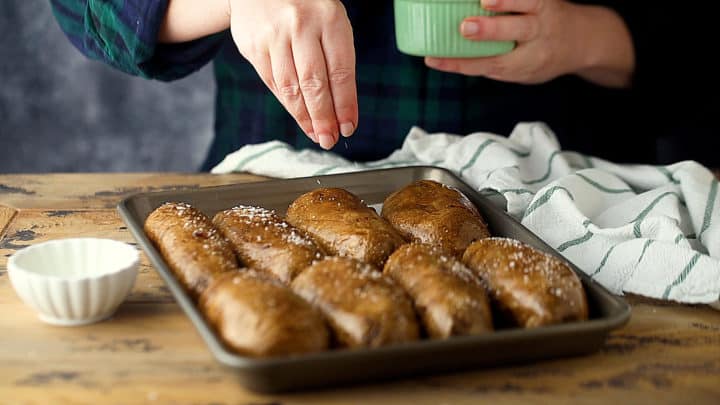 Pop them back into the oven to get them even crispier, then fill them with cheese. 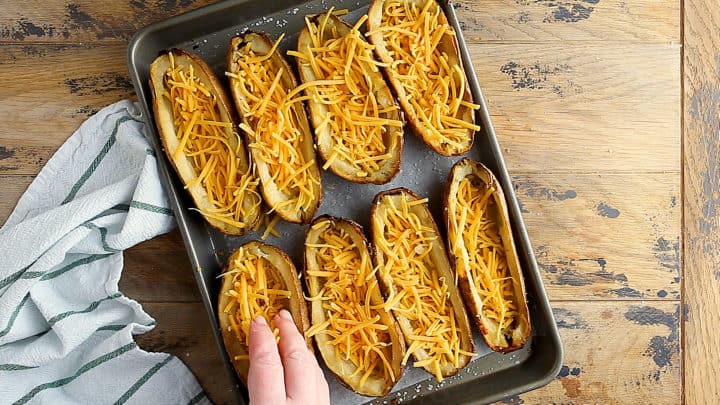 Mmmm, cheese! Shredded cheddar is my favorite, but feel free to use whatever kind you like best!

Back into the oven they go, one more time! Just long enough to melt that yummy cheese. 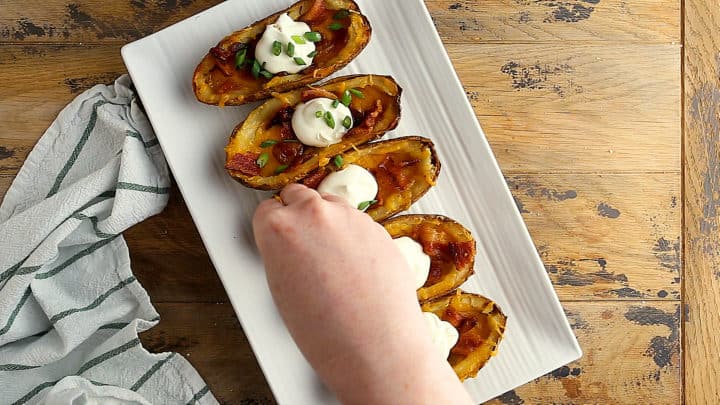 Then top them with crumbled bacon, sour cream, and scallions, aka: green onions. Fresh chives would work well too!

CAN THESE BE MADE AHEAD?

Getting the potatoes baked, cooled, scooped, and ready for their toppings can be a bit of a time-consuming process, so it’s not a bad idea to get a head start on them.

I would suggest doing all of that the day before, and keeping the potato skins in the fridge until about a half-hour before you’re ready to serve your potato skins.

Or, you could prepare a whole bunch, pop them onto a tray and freeze them. Once they’re frozen solid, transfer them to a zip-top bag. Then, whenever that potato skin craving hits, just take out a few, brush them with oil, sprinkle with salt, crisp them up, top them, and dig in! 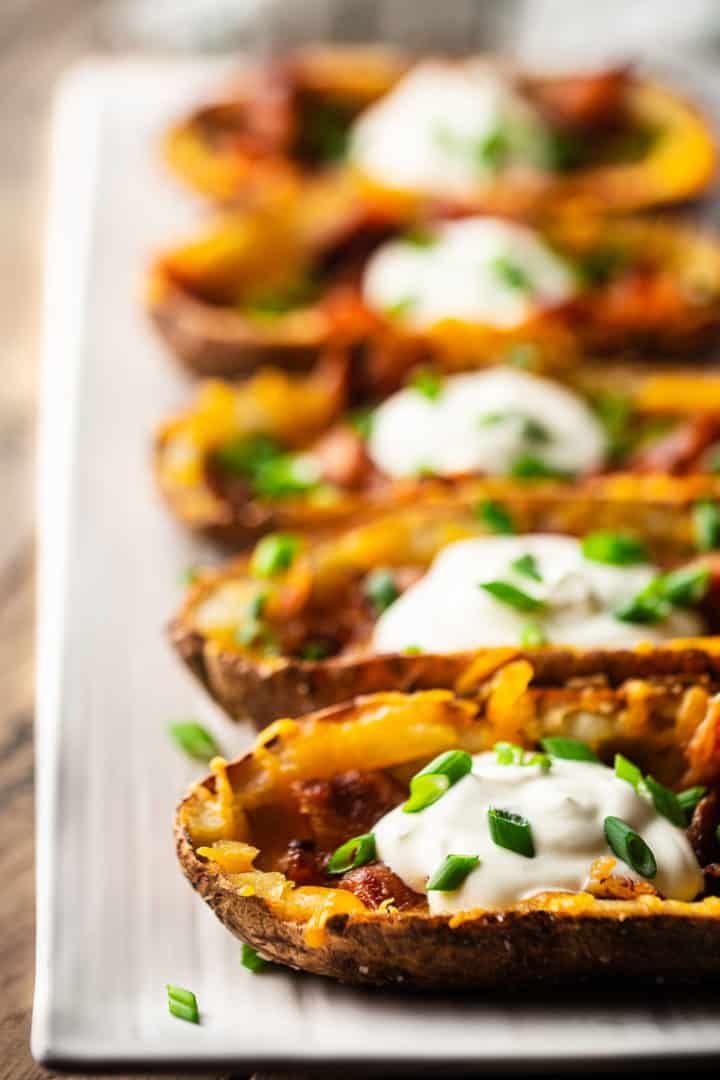 HOW TO MAKE THEM IN THE AIR FRYER

This potato skins recipe works really well in a conventional oven (see instructions in the recipe card below) or in an air fryer.

To convert the recipe below, reduce the cooking temperature to 425 degrees F and reduce the baking time as needed.

Be sure to occasionally check for doneness using the guidelines given, since no two ovens (or air fryers) are exactly the same!

HOW TO STORE LEFTOVERS

Potato skins are best served hot from the oven, when they’re at their crispiest and meltiest!

But a leftover potato skin is still a potato skin, right? You wouldn’t want all that goodness to go to waste.

Place them in an airtight container in the fridge. They should keep for a few days at least, and can be reheated in the microwave for 30 seconds or so, or in a 170 degree F oven until warmed through. 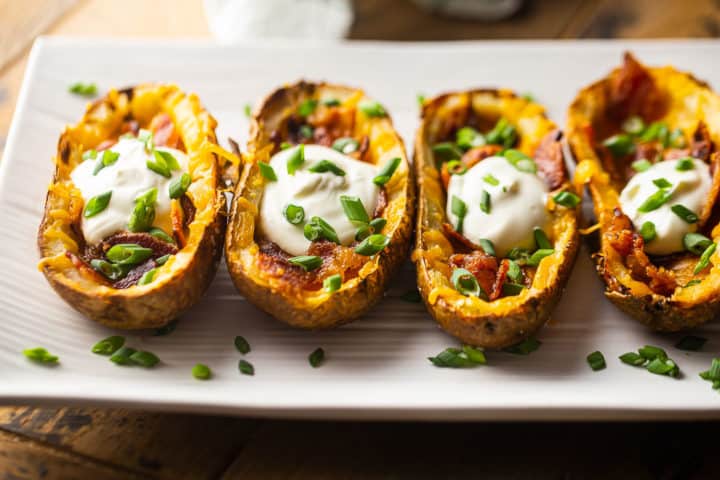 A FEW MORE OF MY FAVORITE POTATO RECIPES: 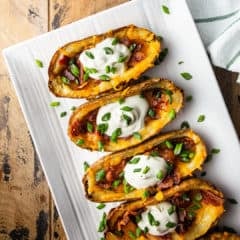 These potato skins are just like you'd get in a restaurant, but better! Loaded with melted cheese, bacon, sour cream, & green onions.