Need a fluffy, light frosting that holds its shape well? Look no further than this whipped cream frosting recipe! Made with just 3 simple ingredients. It’s more stable than regular whipped cream and is perfect for any make-ahead dessert! 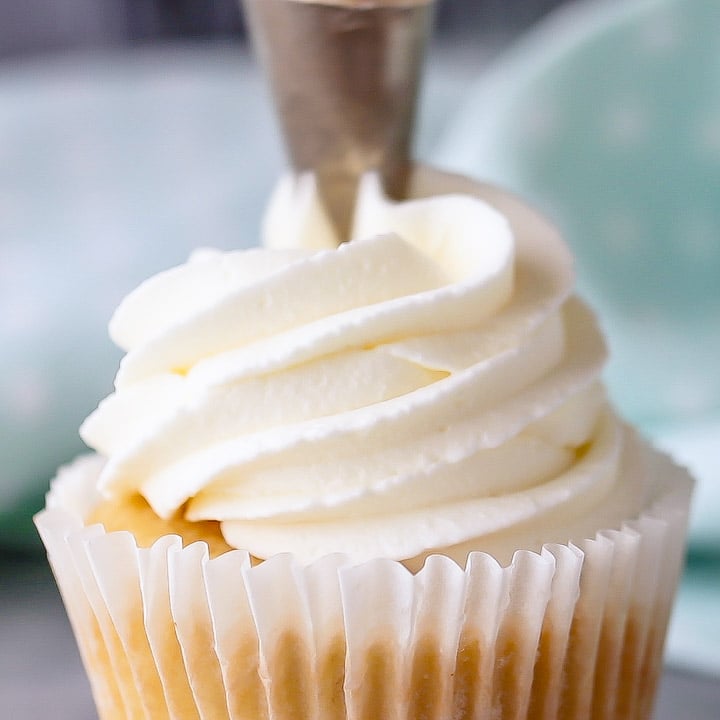 I’m so happy to finally be sharing this whipped cream frosting with you today! It’s a component of so many other recipes on this site, including my Tiramisu Cake, Black Forest Cake, and Banana Pudding Cake. But it’s never had it’s own dedicated recipe post. Until now!

I love this recipe and I make it often. It works as a frosting or filling, as well as a topping. You can pipe on cupcakes, spread it on layer cakes, or dollop it over all sorts of desserts. It would be perfect with angel food cake or pound cake (I’ve got a lemon pound cake and a marble pound cake recipe that you’d love), along with a handful of fresh berries. And it’s a little more stable than regular whipped cream, so you can make it up to 48 hours ahead and it will keep its shape without deflating or weeping. 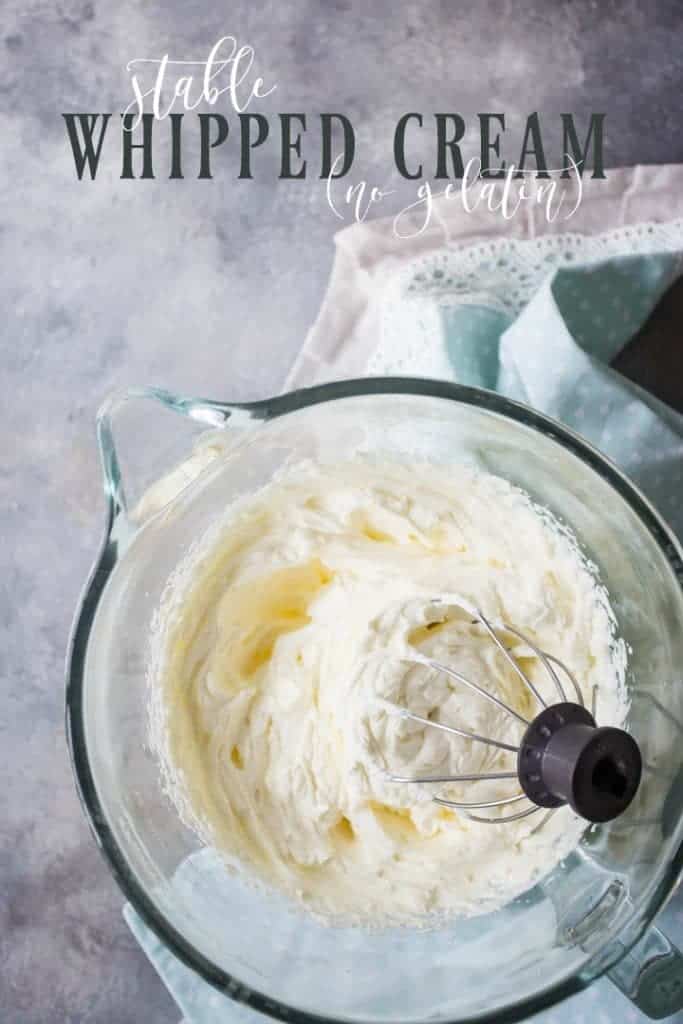 So what’s the secret to this magical whipped cream? There are actually a few key ingredients that make this frosting special.

WHAT IS IN WHIPPED CREAM FROSTING?

There are only 3 simple ingredients in this recipe, but each one serves a specific purpose.

The first ingredient is cream cheese. Cream cheese keeps this whipped cream extra thick and firm. It lends a slightly tangy flavor, but it’s very subtle and not at all overpowering. It compliments Red Velvet Cake or Carrot Cake perfectly.

Be sure to use the kind of cream cheese that comes in a brick. The kind in a tub is not meant for baking. It’s meant for spreading on bagels, so it’s really soft and your frosting won’t come out right if you use that. You need the full-fat, dense cream cheese that’s sold in 8-ounce bricks for this frosting.

If you don’t want to use cream cheese, mascarpone would be a great substitute. It’s a super-creamy soft Italian cheese that has a milder, more buttery flavor than American cream cheese.

The next ingredient is powdered sugar. This will serve to sweeten the topping, but powdered sugar also has a little bit of cornstarch in it that will help to stabilize the whipped cream.

The final ingredient is heavy whipping cream. If you are outside the U.S., you might know this as “double cream.” It’s very thick and rich. If you use light cream, table cream, or half and half, it will not whip up right and you will have a runny mess on your hands. Look for “heavy” cream, “whipping cream,” or “double” cream.

HOW TO MAKE WHIPPED CREAM FROSTING

Start by mixing the cream cheese and powdered sugar together. Just blend them together until they are smooth and combined. 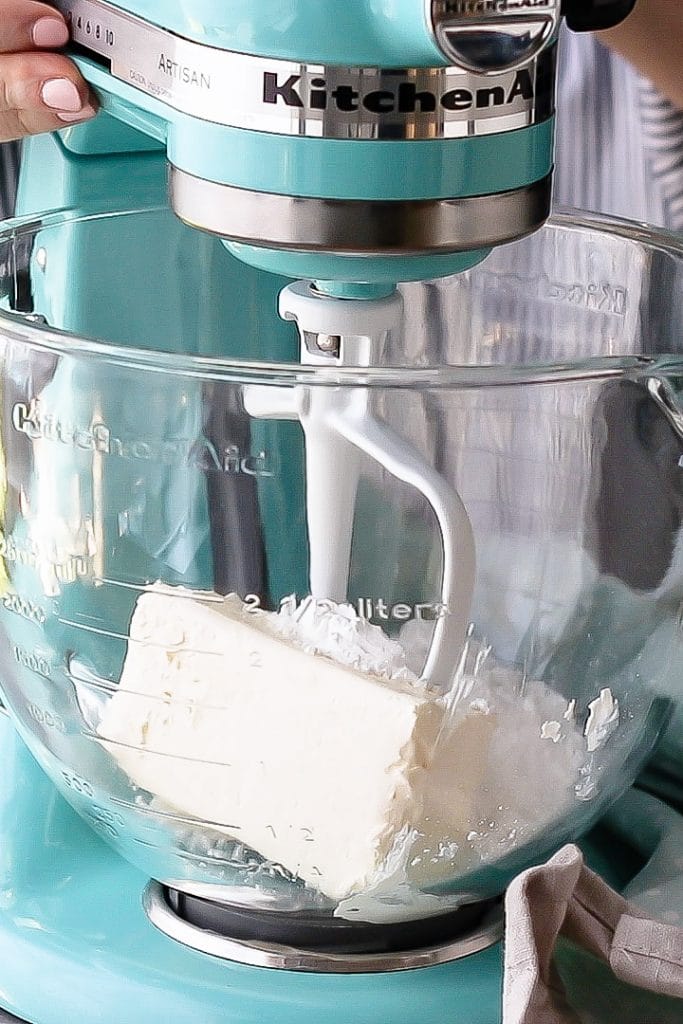 This step can be done with the paddle attachment OR the whip attachment. 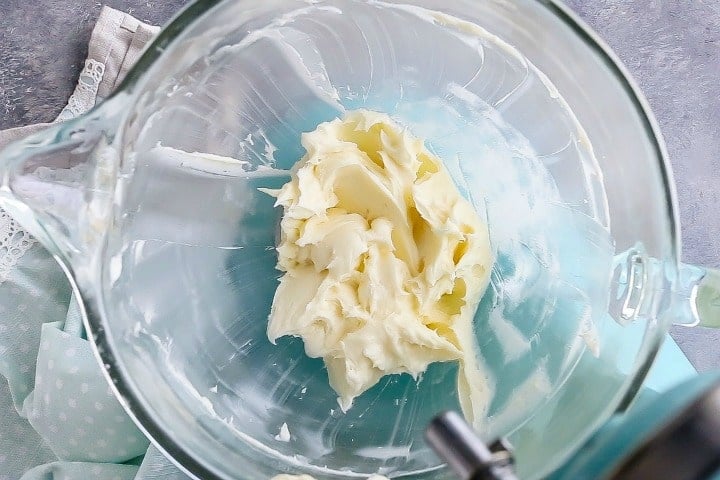 Next, you want to use a silicone spatula to scrape the bottom and sides of the bowl. This will really help prevent lumps in your whipped cream frosting.

Now get your heavy whipping cream into a spouted container, such as a liquid measuring cup. Make sure it’s nice and cold! Cream whips up best when it’s cold. (And if you want to give it an extra boost, refrigerate your mixing bowl and whip attachment too. The colder the better!) 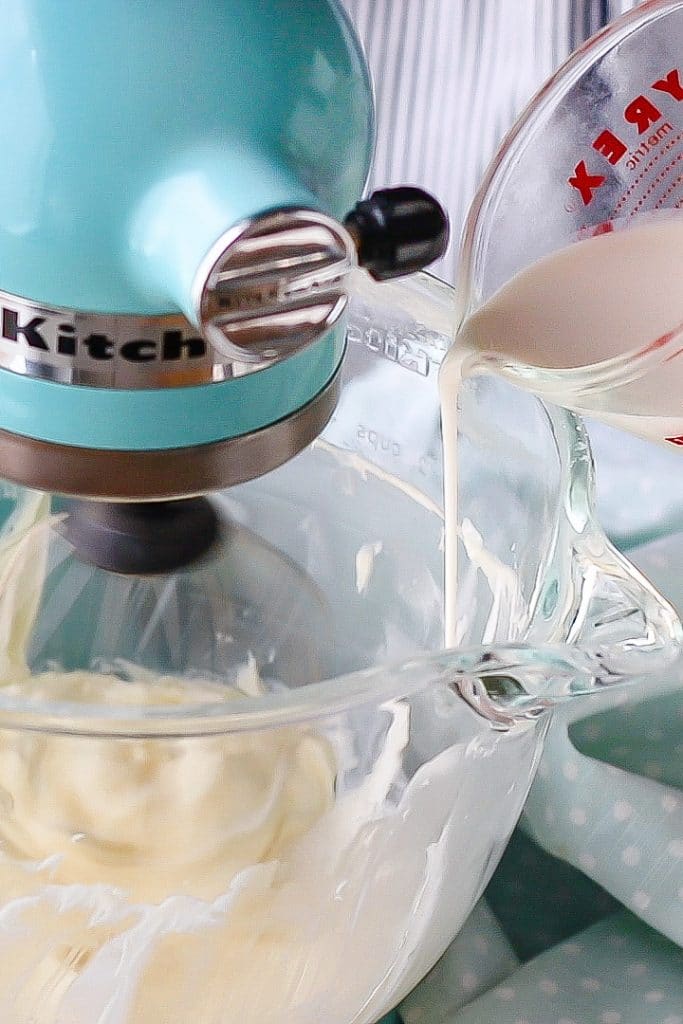 Place the whip attachment on your mixer (if you’re not already using it), and drizzle in the cold cream in a slow, steady stream, while the mixer is running on medium speed. Every so often, turn the mixer off and scrape down the bottom and sides of the bowl again, so that any lumps of cream cheese that may be clinging get incorporated, before too much liquid goes in.

Once all the cream has been added, turn the mixer up to high speed and whip until the icing becomes nice and thick. This should take no more than 2 to 3 minutes. If you whip it too long, you could break it down and it could separate or become runny. So just as soon as you see it thickening up, turn off the mixer because you’re good to go! 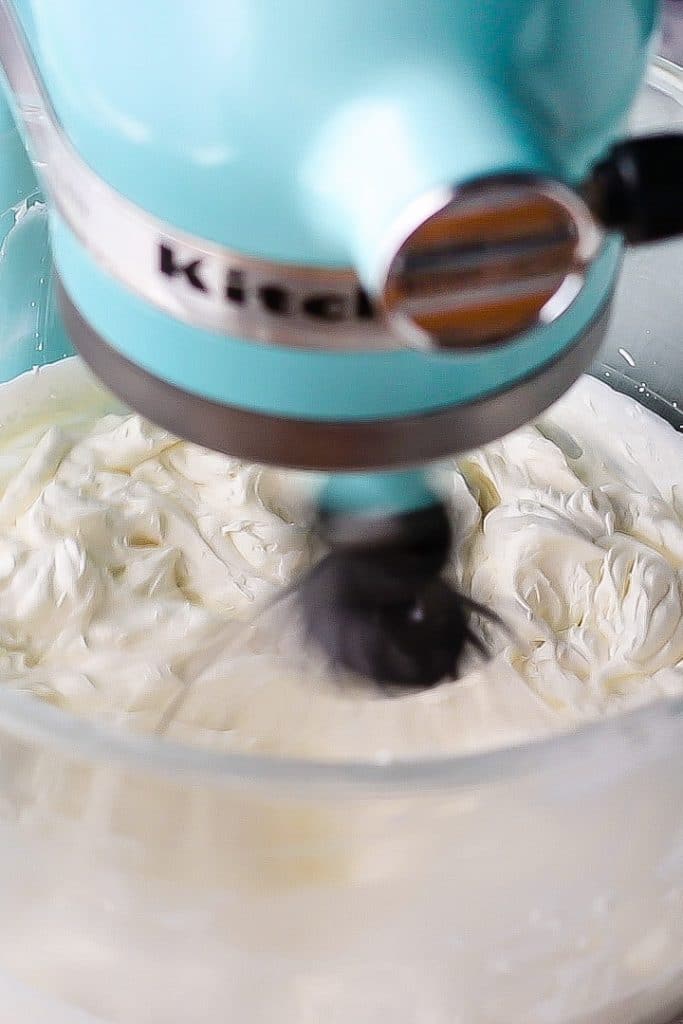 IS THIS WHIPPED CREAM FROSTING GOOD FOR PIPING AND DECORATING?

This frosting pipes very well. It may seem a little loose when you’re putting it into your piping bag, but somehow it magically firms up while it’s in there. If you’re concerned about it running out as you’re filling the bag, clip the end with a clothes pin or binder clip. When you’re ready to pipe just release the clip.

I typically use an open star tip or a french star tip to pipe this whipped cream frosting on cupcakes. It pipes beautifully for this type of decoration. I’m not sure I would use it to pipe roses or write on birthday cakes though. For something like that, you’d probably be better off with Swiss meringue buttercream or American-style buttercream.

CAN THIS FROSTING BE TINTED?

If you’d like to tint this frosting, just add a drop or two of gel paste icing color to the finished frosting.

This whipped cream is much more stable than regular whipped cream (aka: Chantilly cream), which only lasts for a few hours before it starts to weep and lose its shape. With this recipe, you can make and frost your cake or cupcakes a day or two ahead.

It’s best when kept cold, so keep your dessert refrigerated until you’re ready to serve it.

After about 48 hours, the whipped cream starts to give off some of its moisture. If it’s on a cake or cupcake, it’s fine because the moisture just soaks into the cake and that is delicious in its own way. But if you make it ahead and just store it in a bowl, you may notice that the frosting at the bottom of the bowl is looser and not as fluffy as what’s on top. So, if you’re using it as a topping I would recommend making it no more than 24 hours before you serve it. 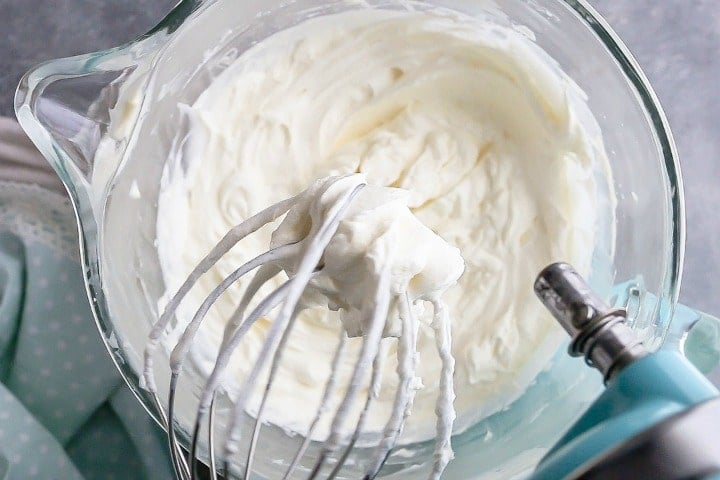 You’re going to love how easy it is to make this whipped cream frosting, and how convenient it is to be able to make it ahead. Plus, there’s no fussing around with gelatin! Let me know how you decide to serve it in a comment below. 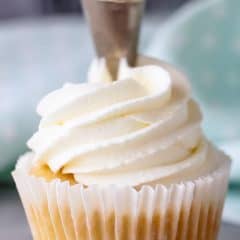 * Do not use cream cheese from a tub. Look for the kind of cream cheese that comes in a brick for this recipe.