Need a frosting that’s fluffy, sweet, and light as can be? Look no further! This quick marshmallow frosting recipe is perfect. You can even toast it! 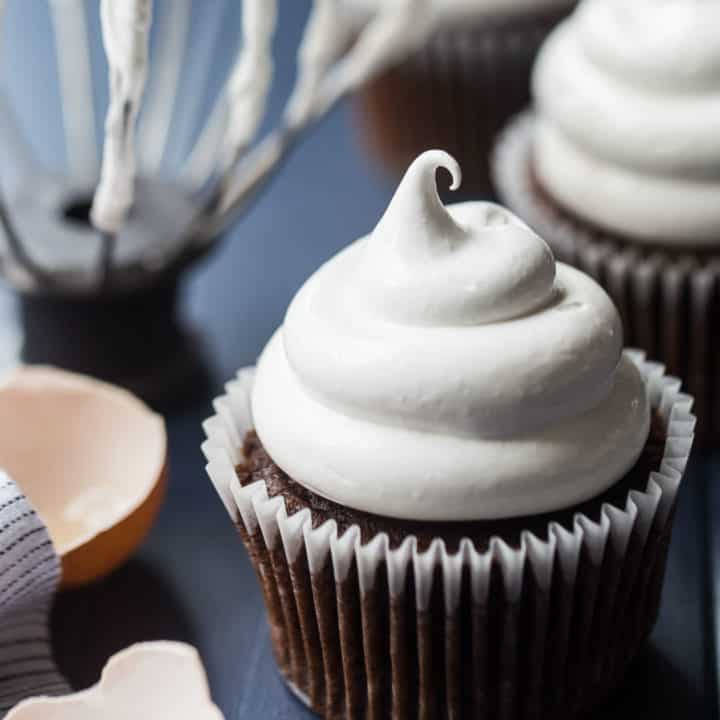 Hey how was your weekend? Did you do anything fun?

We took it real easy and just enjoyed the beautiful weather. Wasn’t it fabulous?? High 70’s & sunny; it doesn’t get any better!

And now it’s a brand new week and my kids are starting day camp. I think they were ready for some activity. I like them to have some down time after the school year ends, but after a while they can get a little rammy!

So this gives me more time to focus on bringing you fabulous recipes.

Today I’m really excited to be bringing you another frosting recipe. I know how much you love frosting recipes. My whipped cream frosting is one of the top recipes on this site, as is my royal icing recipe. And Swiss meringue buttercream isn’t far behind!

And now we have marshmallow frosting, aka: Italian meringue. Another great one to add to the collection!

I think you’re going to love it because it is SO light and fluffy, and it tastes just like marshmallow. You can even toast it! It’s pretty simple to make, with just 5 simple ingredients (plus water), and it whips up stiff and pipable, so it’s great as a filling or topping for cakes, whoopie pies, brownies, cookies, or tarts. 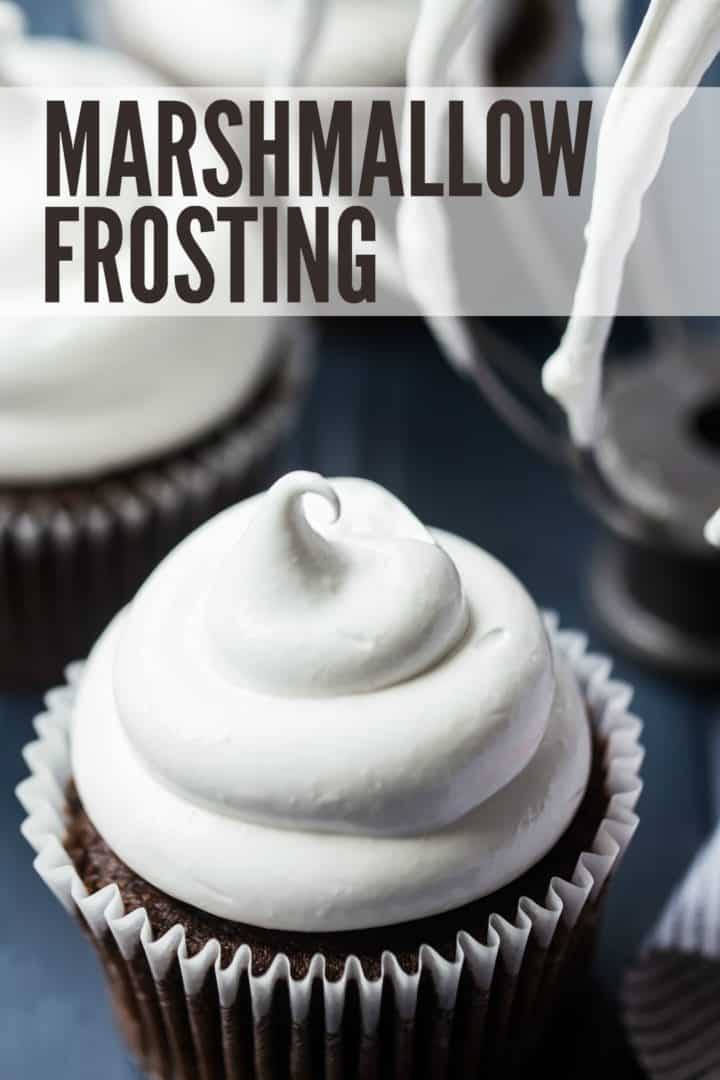 HOW TO MAKE MARSHMALLOW FROSTING

You’ll only need a few pantry staples to make this delicious topping: 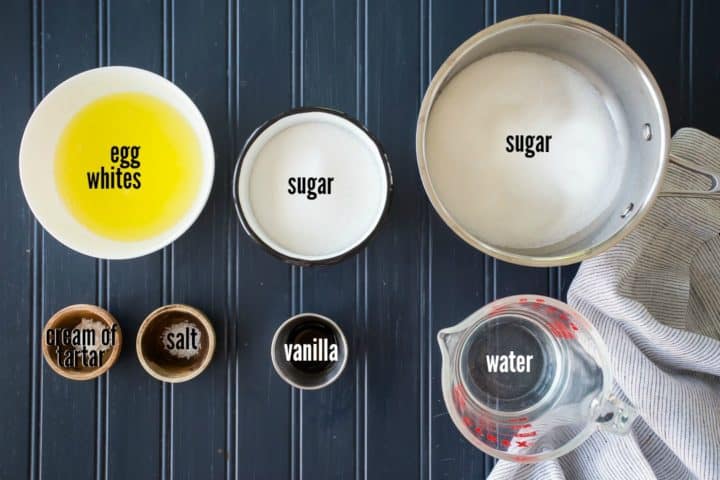 The cream of tartar is there just to make the frosting more stable. You can buy it at the regular grocery store, in the spice aisle. Or you can order it online here: Cream of Tartar. And if all else fails, a few drops of lemon juice or white vinegar can be substituted.

This recipe comes together in 2 main steps:

Let’s start with the whites.

Place the whites in a large mixing bowl, along with the cream of tartar and salt. 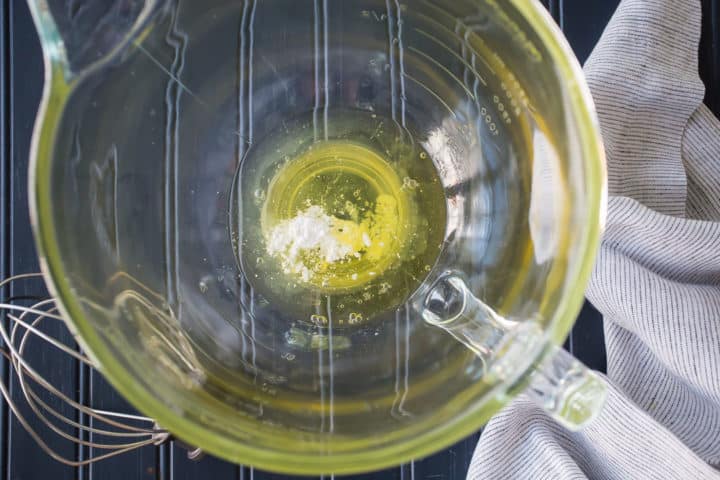 I like to use whites from fresh eggs, but you could also use pasteurized egg whites from a carton. I’ve never tried making this with powdered egg whites, so I can’t say for sure if that is a good option. 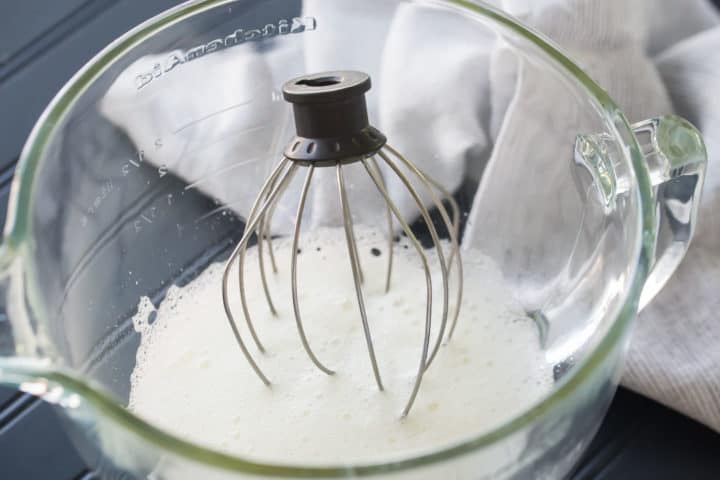 Whip this mixture together until it starts to look really foamy. Then, take one cup of the sugar, and start adding it r-e-a-l-l-y S-L-O-W-L-Y, while continuing to whip. I’m talking like a few granules at a time. If you add it in too fast, it will deflate your whites, so be sure to go nice and slow. 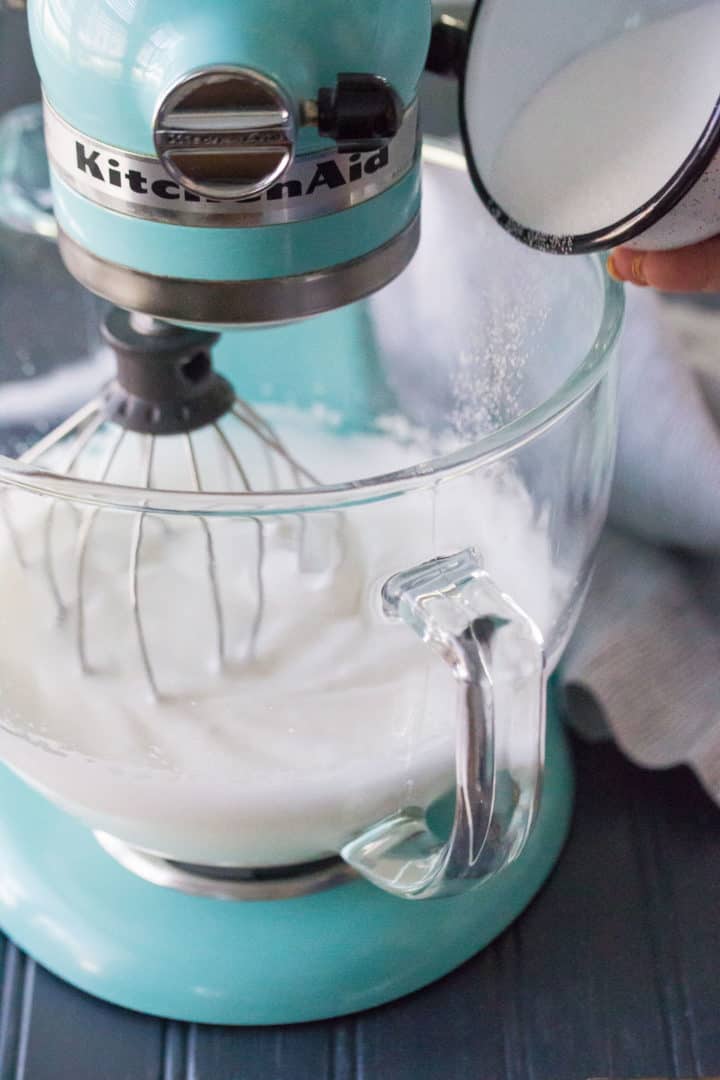 When all the sugar has gone in, turn the mixer up to high speed and whip the heck out of it. Once it’s stiff enough to hold a stiff peak, add in the vanilla. 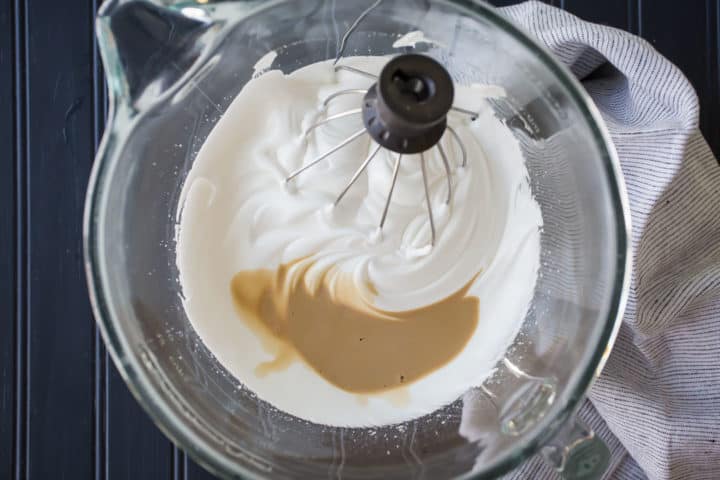 Now just keep that mixer going on low speed, while you get going on the sugar syrup.

The remaining sugar goes into a small pot, along with the water. 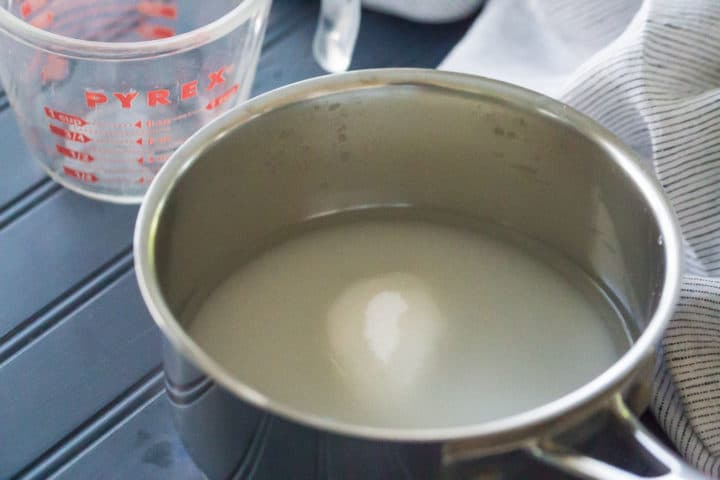 Heat this mixture on the stove until it’s boiling. You don’t have to stir it! In fact it’s probably better if you don’t (it could cause it to crystallize). If your sugar doesn’t want to dissolve you can just swirl the pot gently to encourage it a bit. 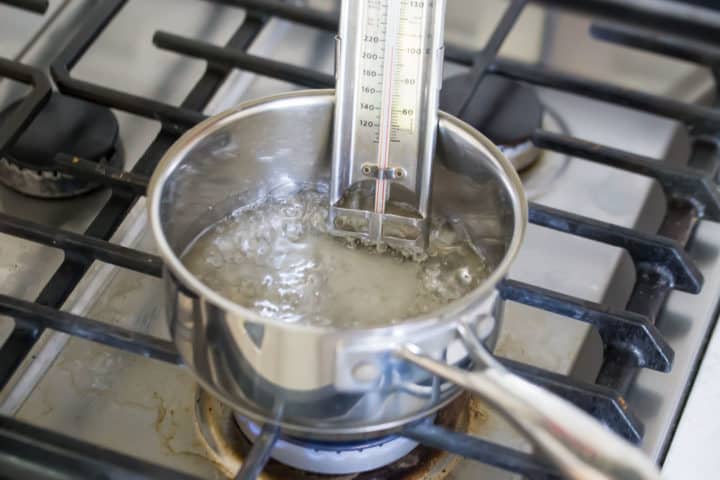 Once the sugar syrup reaches 235 degrees F, it’s go time. Here’s a link to the candy thermometer I like to use: Candy Thermometer. It only costs a few dollars and it’s really useful to have.

With the mixer still going at low speed, pour the hot syrup into the whites in a slow and steady stream. Be careful it doesn’t hit the whisk, or it could throw hot sugar out of the bowl and burn you. Just aim for that sweet spot right between the whisk and the side of the bowl. 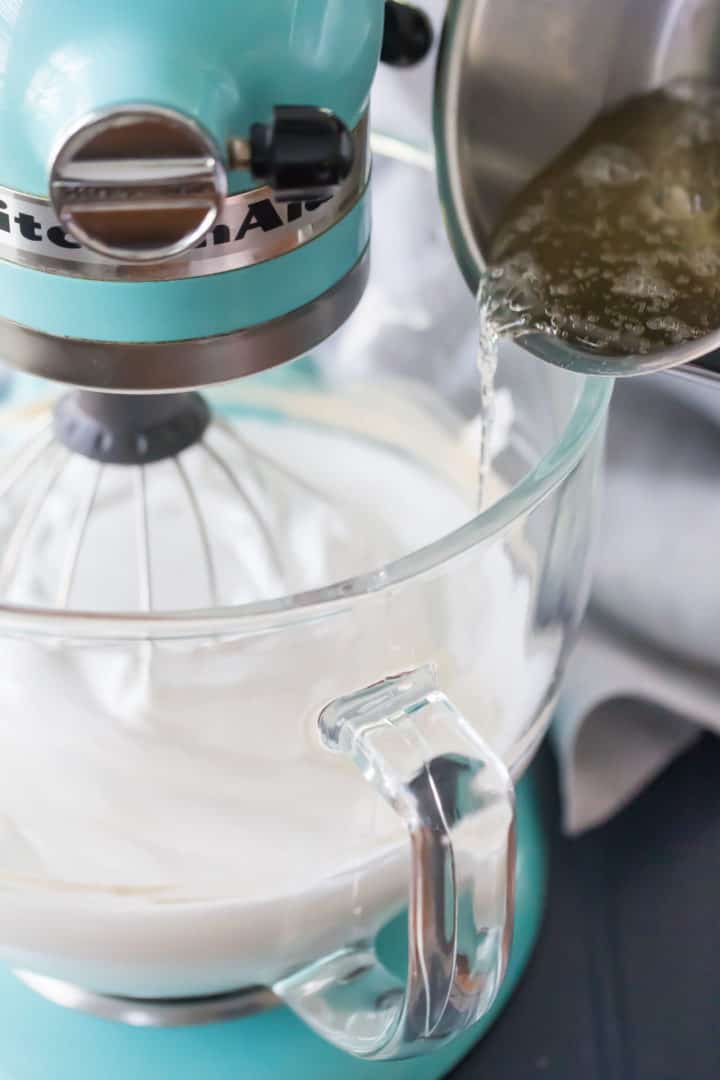 Once all the syrup has been added, turn the mixer up to high and whip it like crazy. You’ll see it get really thick, really glossy, and really stiff.

And that’s all there is to it!

CAN THIS BE COLORED?

If you’d like to tint this frosting, you can do that with just a drop or two of gel paste color. This type of food coloring is highly concentrated, so it won’t water your marshmallow frosting down at all, like a liquid food coloring might. 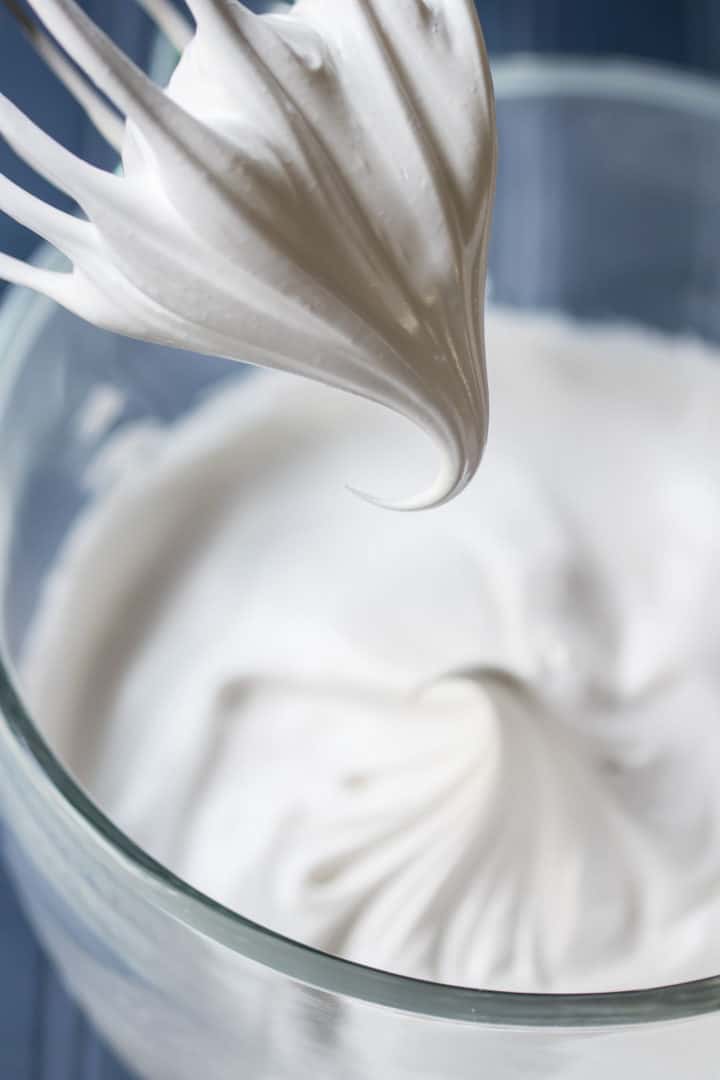 CAN THIS BE FLAVORED?

I’m not sure I’d recommend adding any kind of chocolate or fruit puree to this frosting, as it could really weigh it down. But you may be able to get away with adding a little freeze-dried fruit that has been ground to a fine powder in a food processor.

CAN THIS GO UNDER FONDANT?

While this frosting would work well as a filling between layers of cake, I don’t know that it would be a good idea to put it under fondant.

It doesn’t really “set” or crust over, so it might make it difficult to move the fondant around once it has touched the marshmallow frosting.

If you’re looking for a good option to go under fondant, I would recommend frosting your cake with Swiss meringue buttercream or American-style buttercream, and then chilling it before covering with fondant.

HOW TO TOAST MARSHMALLOW FROSTING

If you are thinking about making any kind of s’mores-related dessert, this marshmallow frosting would make the perfect topping. It toasts beautifully, as you can see here: 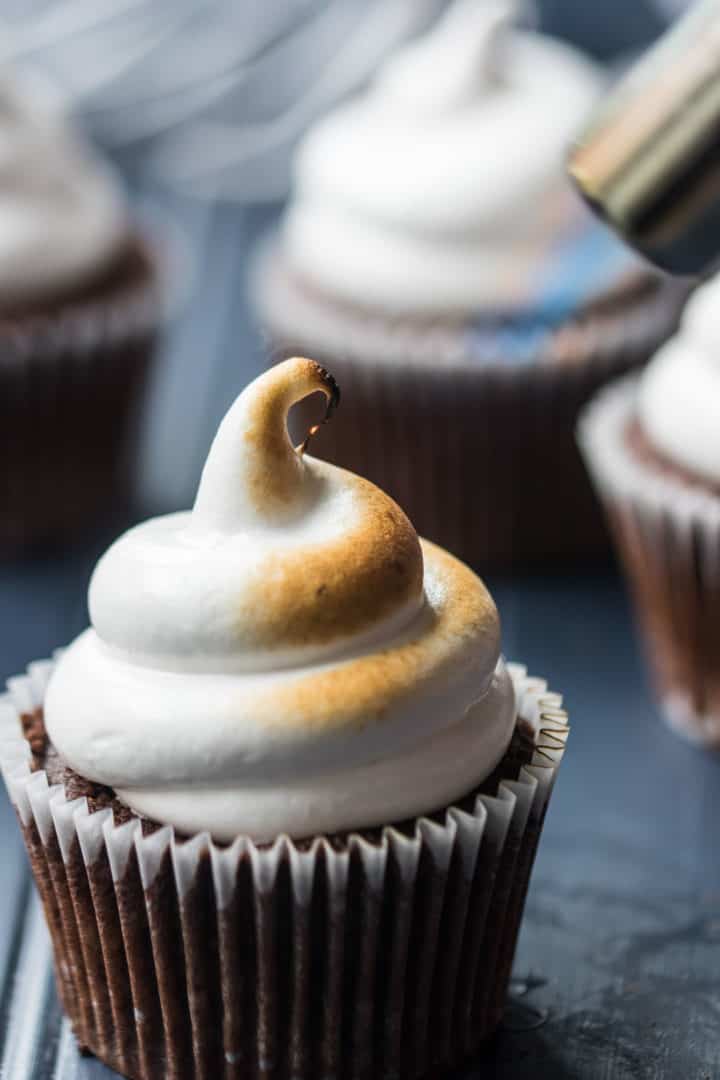 I like to use a brulee torch for this type of application. Here’s a link to the one I have: Brulee Torch. It’s easy to use and so much FUN!

But if you don’t want to buy one, this can be toasted under the broiler. Just be careful and keep a close eye- it can burn really fast!

Because of the addition of cream of tartar, this frosting is relatively stable. It can definitely be piped, as you can see in the pics here, and it holds its shape well.

However you may notice that it might lose a little of its volume over time.

WHY IS MY MARSHMALLOW FROSTING RUNNY?

Nine times out of ten, if you’re having trouble getting your meringue to whip up properly, it’s because a trace of fat somehow made its way into your bowl. Egg whites WILL NOT whip up right if there is any grease or fat present, no matter how microscopic it might be.

So make sure your bowl and whisk are REALLY clean, with no trace of greasiness whatsoever. It’s best to clean them in very hot, soapy water and rinse them well, then dry them with a clean towel.

Egg yolks also contain fat, so be really careful not to pierce the yolk when you are separating your eggs. It’s a good idea to crack each egg into a separate bowl first, before adding it into the mix, just in case this happens accidentally. That way, you don’t contaminate ALL the eggs at once.

If you’re looking for more info or troubleshooting on making a meringue, be sure to read this post: Meringue Cookies.

CAN MARSHMALLOW FROSTING BE MADE AHEAD?

You can definitely get away with making this frosting, putting it on your cake or whatever, and then serving a day or so later. The marshmallow holds its shape very well.

But if you are looking to make it and store it in a container, and then use it at a later time, I’m not sure that would be your best bet. I have tried this, and a lot of times when you stick your scoop into it, it deflates a bit.

Your best bet would be to apply it right away, while it’s nice and stiff.

It’s fine to leave it out at room temperature for a few hours, but any longer than that, and it should probably be refrigerated. The hot sugar mixture will cook the egg whites, but it’s always better to be safe than sorry.

If your leftovers hang around for more than 2 days or so, pop them into the freezer. 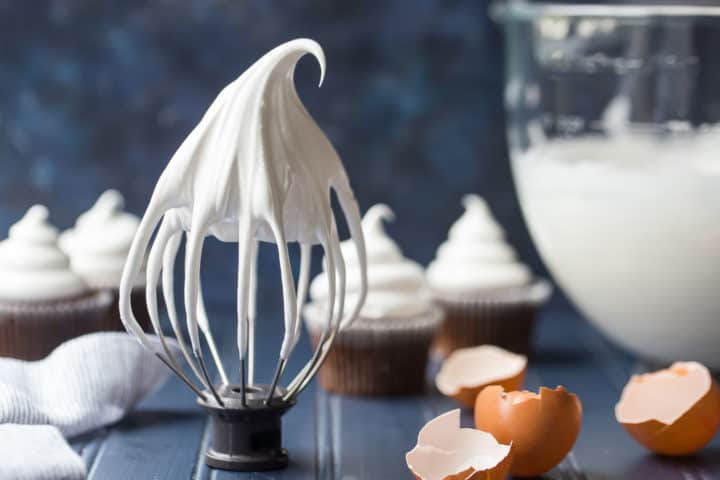 Here are a few more of my favorite frostings and fillings: 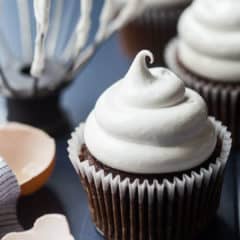 Need a frosting that's fluffy, sweet, and light as can be? Look no further! This quick marshmallow frosting recipe is perfect. You can even toast it!

*A few drops of lemon juice or white vinegar may be substituted.