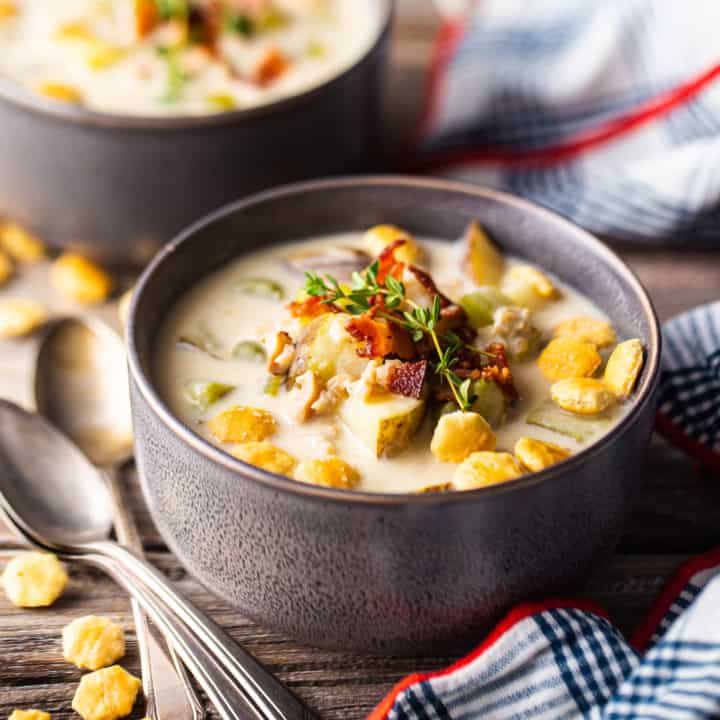 I don’t know what it’s like where you are, but here in the Philly area it’s like a switch suddenly flipped and the seasons changed!

It’s been cold and rainy, and I’m just like, what happened?

Now it’s soup weather, and all I want to eat is steamy, comforting bowls of cream of mushroom soup, French onion soup, and broccoli cheese soup.

Or better yet, this clam chowder recipe. Because it tastes like the ocean (only better!) and it brings back all those happy summer memories of being down the shore!

You’re going to love how thick and hearty this clam chowder is. It’s hot and comforting and loaded with chunky veggies and seafood, all swimming in a savory, creamy broth. It’ll warm your bones and make you feel so cozy! 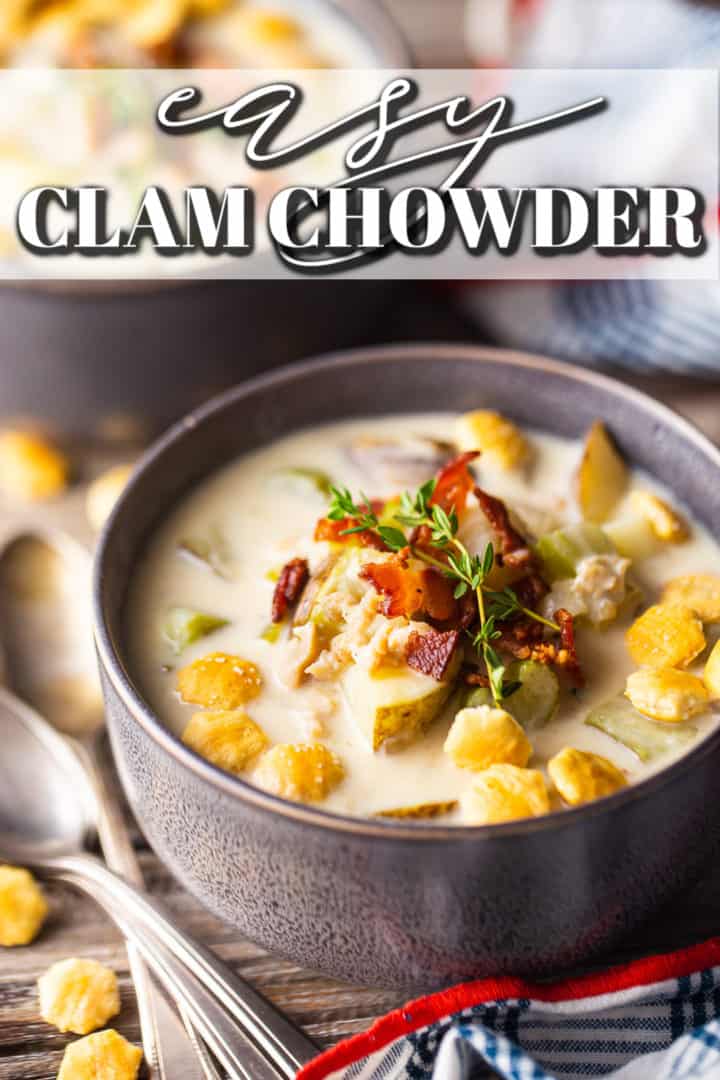 So it’s very creamy and velvety in texture. There are onions, celery, herbs, and pepper, so it has a very savory, familiar taste that reminds me a little of Thanksgiving.

But there’s also lots of clams plus their liquid, so there’s this additional briny, seafood-y flavor that’s very prominent.

Not to mention a subtle hint of smokiness from the bacon, that complements the clams in the most delicious way!

And a generous amount of chunky potatoes that make this soup feel so substantial and nourishing. Honestly, it’s a full meal in one pot, and nothing could be cozier.

HOW TO MAKE CLAM CHOWDER

This recipe is very quick and easy to make. Honestly, the biggest thing is just waiting for the potatoes to cook. Other than that it should only take you around 15 or 20 minutes.

Start by cooking a few slices of chopped bacon in your soup pot. You want to render out all the fat and use that to cook the veggies in. 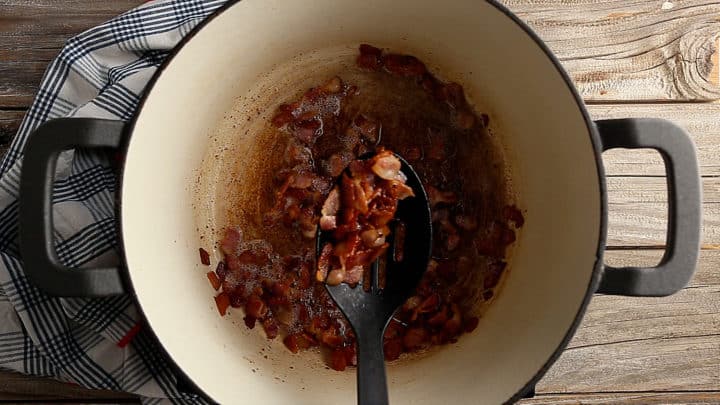 So when the bacon starts looking crisp, fish it out with a slotted spoon and drain it on paper towels, leaving the fat behind in your pot.

Add the celery and onions, and continue to cook them over medium heat until the onions look translucent and the veggies are getting tender.

Now you’re going to make a roux. This is what will give your clam chowder that thick, hearty texture.

Add a little more fat to the pot, in the form of butter. Once that’s melted down, sprinkle in some flour and stir it all around until the celery and onions are coated in what looks like a thick paste. 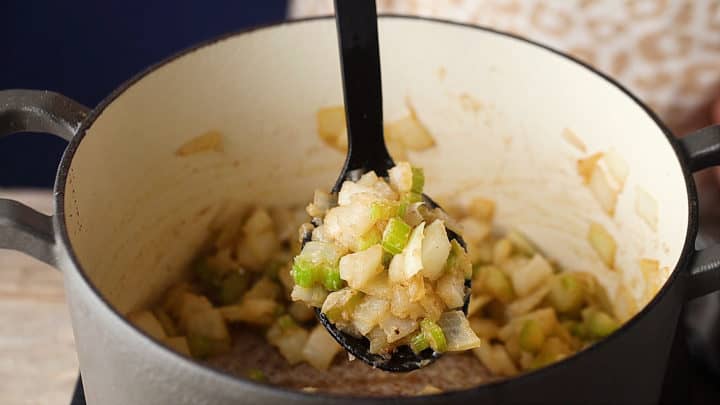 Next pour in the clam juice, and stir everything together. You should have a very thick liquid. 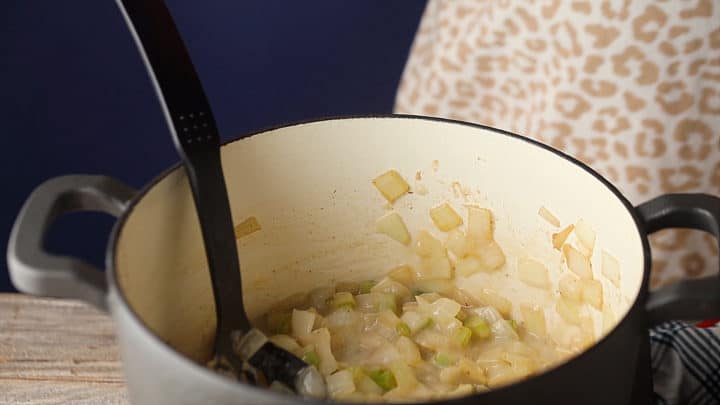 Stir in the potatoes and season with salt and white pepper. If you only have black pepper, that’s fine too. 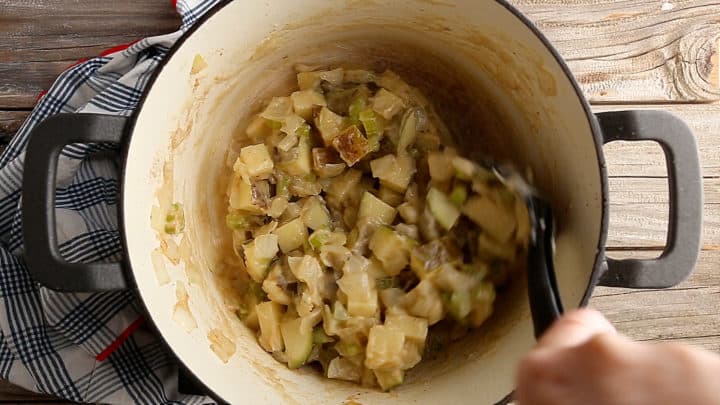 The next step is to work in the milk and cream. Add a little at a time at first, stirring after each addition. This will prevent lumps from forming. Nobody wants a lumpy chowder, right?!

Once the dairy’s in, add a bay leaf and a few sprigs of fresh thyme, and just let everything simmer over low heat until the potatoes are cooked through. 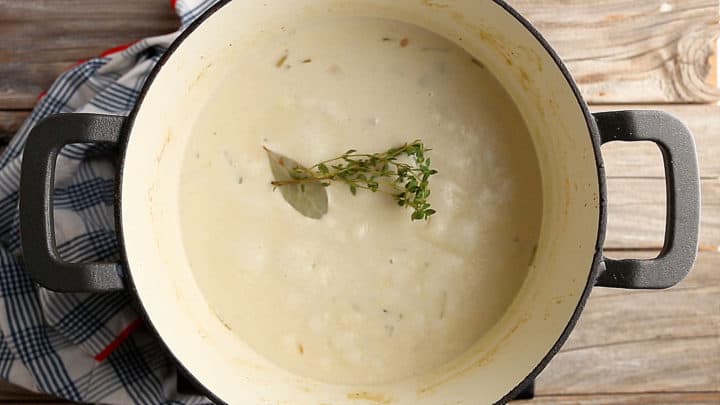 The very last ingredient is the clams. I like to use minced clams in juice, but you can use chopped clams instead, or even whole clams that you’ve steamed yourself. I think that would make an absolutely stunning presentation! 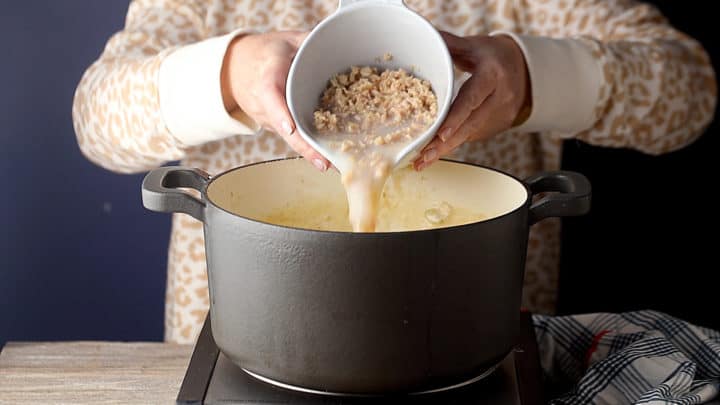 Ladle the soup into bowls and garnish with the crispy bacon, a few more sprigs of thyme, and a handful of soup crackers. 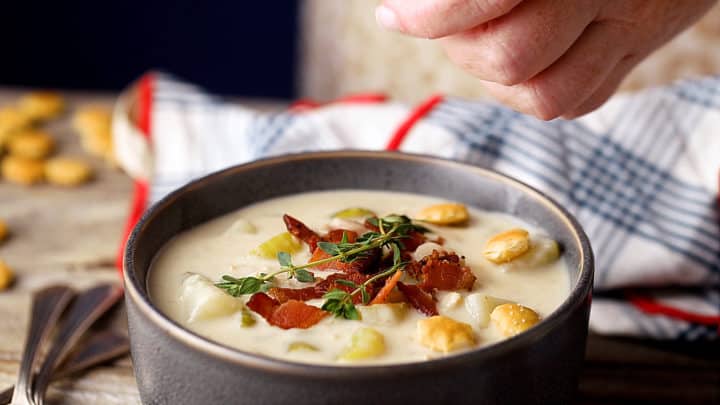 Ta-dah! It doesn’t get any more authentic than that, am I right? This is seriously the real deal.

This recipe is loaded with veggies and potatoes, and protein-rich seafood. But I’ll let you judge for yourself! All the nutritional info is in the recipe card below.

If you’re looking to make a gluten-free clam chowder, swap out the flour for 1/3 cup of cornstarch.

And if you want it to be dairy-free, I’m not sure if it would taste quite the same but I’d imagine you could sub in your favorite plant-based milk (definitely unsweetened and unflavored!) and cream products. 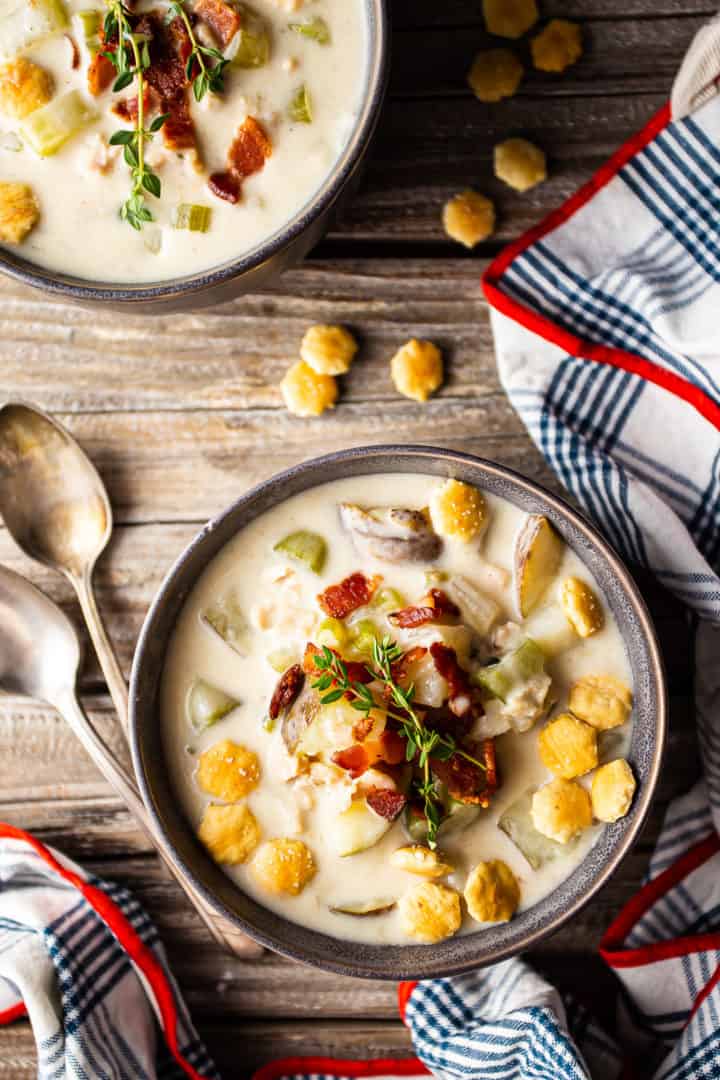 HOW TO SERVE IT

This soup is so chunky and satisfying, I think of it as a meal in itself.

But if you’d like to round things out a little more, serve it alongside some fresh greens lightly dressed with vinaigrette, and some homemade bread.

I’ve got tons of bread recipes, but here are a few of my favorites:

Or serve it in individual bread bowls! Now that would really be fantastic!

If you have any leftovers, they can be kept in the fridge for up to 5 days or so. This recipe reheats well in the microwave or in a pot on the stove.

Or if you’d like to make it ahead and freeze it, do everything but add the milk and cream. Pop it into an airtight, freezer-safe container, and it should keep for several months.

When you’re ready to serve it, thaw it in the fridge, then transfer it to a pot, stir in the milk and cream, and warm it up.

I suggest doing it this way because creamy soups will often separate and become grainy during the freeze/thaw process. 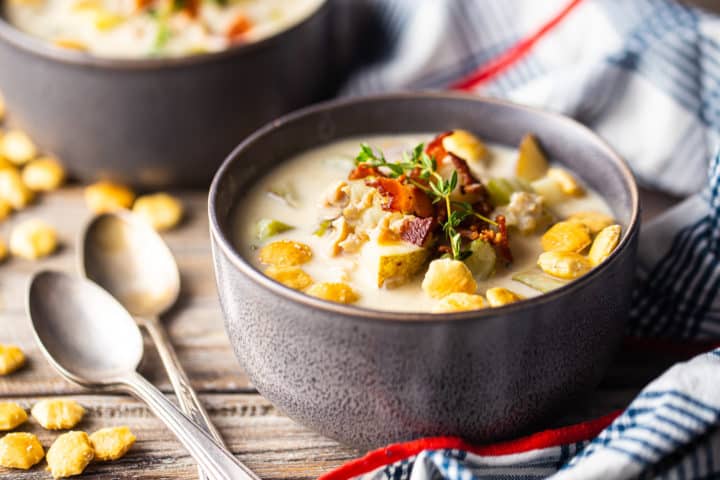 A FEW MORE OF MY FAVORITE ONE-POT MEALS: 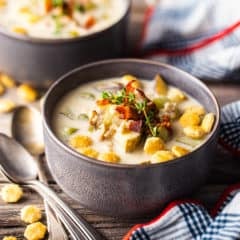 To make this chowder even thicker, use a stick blender to blend some of the veggies into the broth, while still leaving plenty of chunks.