The most magnificent Dutch apple pie recipe! Softly spiced seasonal apples, topped with a crunchy, buttery crumb topping. Out of this world! 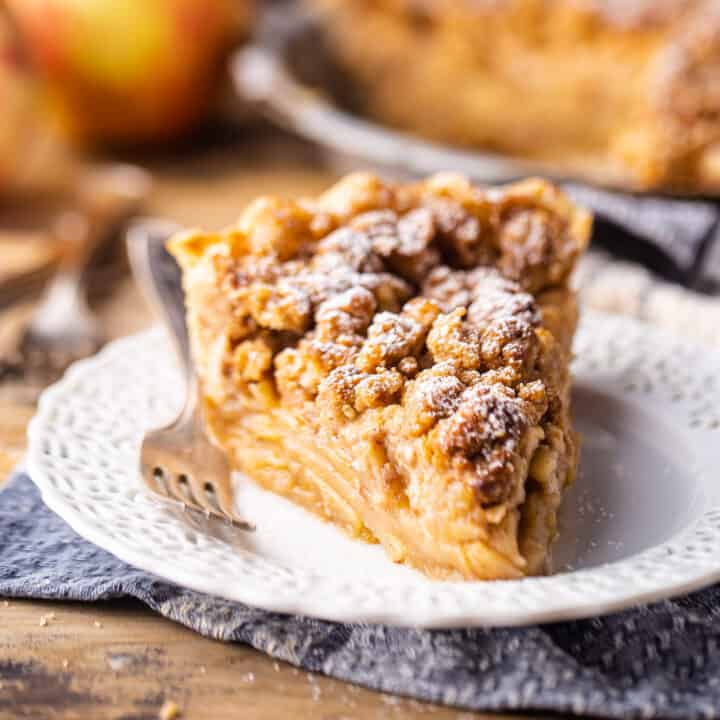 We are all about apple recipes here at my house. Apple turnovers, apple dumplings, apple crisp… these are my older son’s favorites so I try to keep them on heavy rotation, especially in the fall and winter when apples are in season.

So he was very excited when I told him this Dutch apple pie recipe was in the works!

The crust is flaky as can be, and the apples are slightly sweet, toothsome, and gently spiced with warm cinnamon. The topping is crunchy-sweet, buttery, and contrasts texturally with the soft apples in the most incredible way. 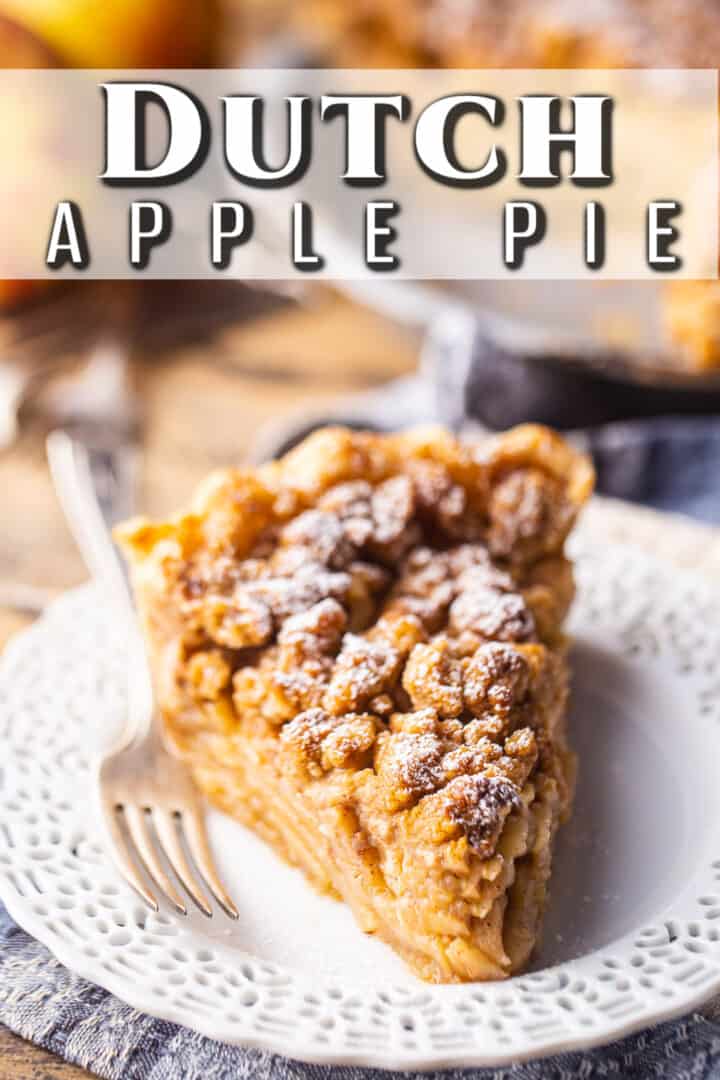 WHAT IS DUTCH APPLE PIE?

Dutch apple pie is just like traditional apple pie, but without the top crust. Instead, it gets a thick layer of crunchy crumb topping.

So there are 3 basic components: 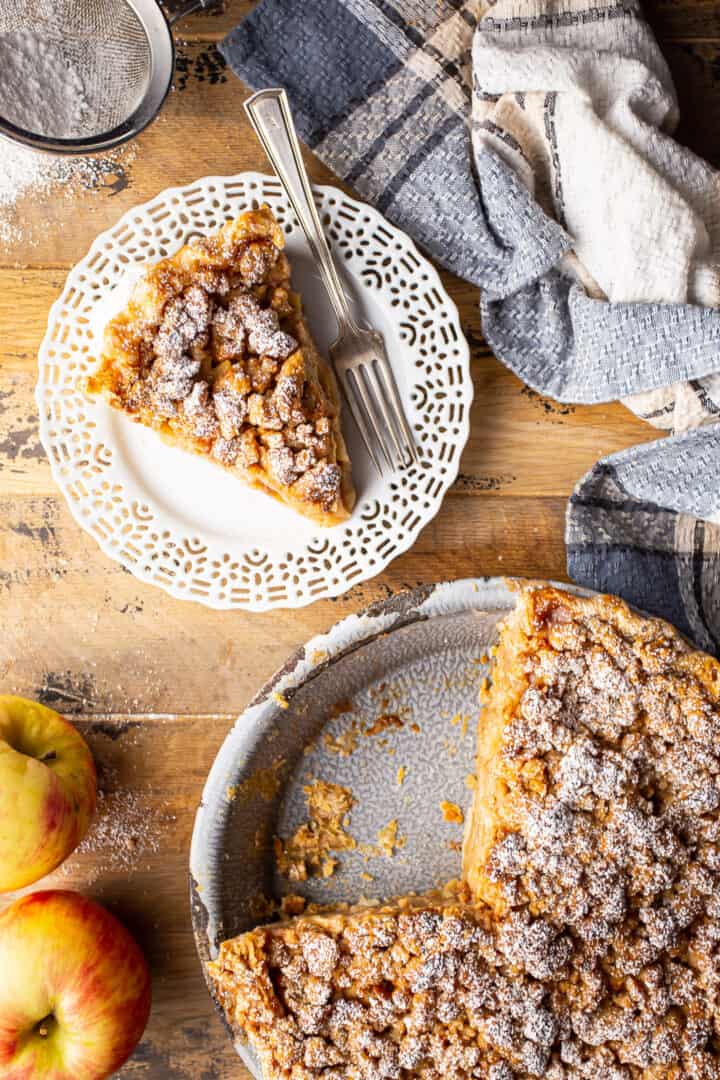 HOW TO MAKE THIS DUTCH APPLE PIE RECIPE

To make this pie, you’re going to start from the bottom and work your way up.

If you’re in a time crunch, you can use a store-bought pie crust for sure. But I love my homemade pie crust recipe. It’s got so much rich, buttery flavor, and it is without a doubt the flakiest pie crust you’ll ever taste.

This is thanks to a unique folding process, similar to what you’d do if you were making croissants or puff pastry (but a lot less fussy!).

That extra step yields results that are just incredible. I highly recommend you give it a try! The recipe can be found here: Homemade Pie Crust Recipe.

You’ll only need to make half the batch. 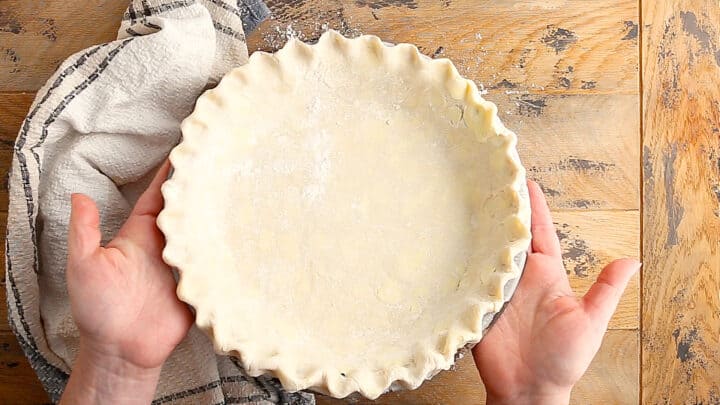 Roll it out to an inch or so larger than your pie dish, then nestle it in, trim off the excess, fold and crimp the edge, and pop it into the fridge to chill, while you make the apple pie filling.

This recipe calls for a LOT of apples. When it’s still raw, you might think it’s too much, but trust me. As the pie bakes and cools, the apples soften and sink down a ton.

Use any kind of apple that’s good for baking. In other words, you want something that holds its shape well when cooked, like a Granny Smith, MacIntosh, or Honeycrisp apple. Nothing that would become mushy. Those kinds of apples are more suited for making applesauce.

Peel, quarter, and cut out the cores. 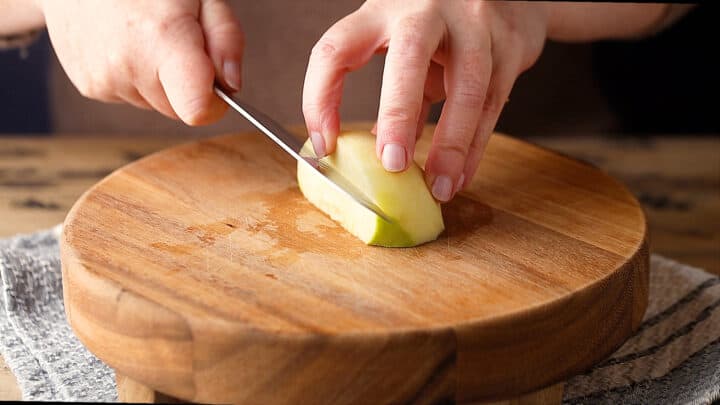 Toss them together with sugar, flour, lemon juice, cinnamon, nutmeg, salt, and cloves, making sure every slice gets coated in the mixture. 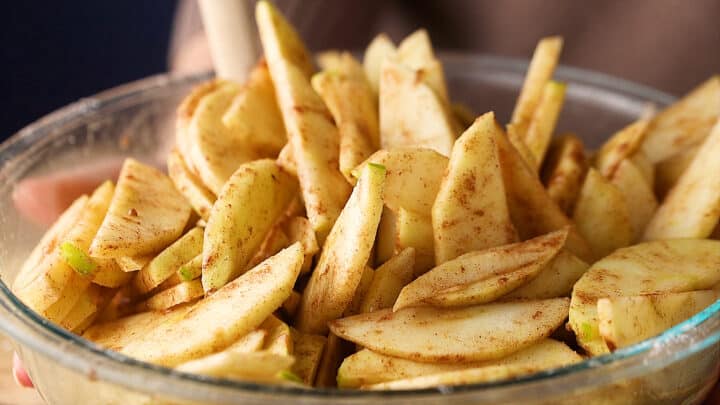 The flour will thicken the juices as the pie bakes. No runny pie filling here!

The lemon juice lifts the flavors and makes the apples taste even more apple-y. Salt does the same, and the spices are traditional for American apple pie. You could substitute apple pie spice, if you like.

Tip the filling into your prepared pie crust, and put the unbaked pie back in to chill while the topping gets made.

This is the crumb topping recipe I use for everything from muffins and quick breads, to pies and crisps.

It can be customized in all sorts of ways (more on that below) and it’s really quick and easy to make.

Toss all these ingredients together with a fork. While it’s warm it will be kinda like wet sand, but as it cools it gets more crumbly. 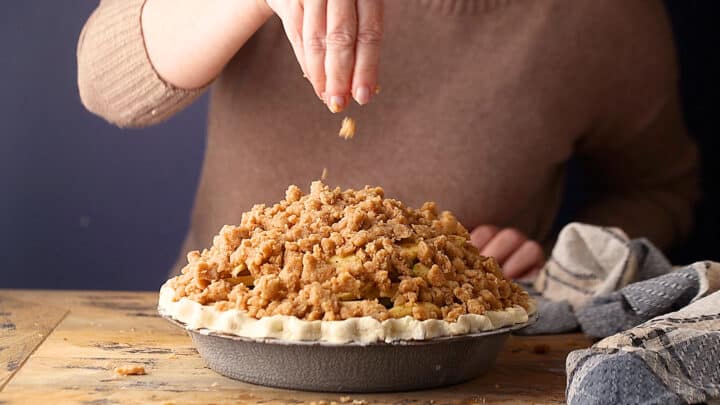 Sprinkle it all over the apples in an even layer, then slide your pie into a hot oven to bake.

WHEN IS IT DONE?

This pie is so big and thick and heavy, and the apples are a very firm fruit so it will take a while to bake. Usually somewhere in the neighborhood of one hour.

You’ll know it’s done by feel. Push a toothpick into the center of the pie. The apples should feel softened and tender, but not mushy.

If the topping starts to get too brown before the apples are done, lightly drape a sheet of aluminum foil over the pie while it continues baking.

Overall I think pies are relatively healthy as far as desserts go. They’re mostly fruit and they’re not super-sweet and sugary, so they have that going for them.

But “healthy” can mean a lot of different things to different people, so you should probably judge for yourself.

There’s a full nutritional breakdown in the recipe card below.

As for ingredient subs:

This recipe just calls for the basics, but you could definitely get jazzy with it!

CAN THIS BE MADE AHEAD?

Pies are definitely a winner for making ahead! They take a long time to bake and cool so it’s a very good idea to make this Dutch apple pie recipe at least a few hours before you plan to serve it.

It will keep at room temperature, loosely covered, for a day or so.

If you have any leftovers, stash them in the fridge. They should last for around 5 to 7 days.

You can also freeze this, either baked or unbaked.

If it’s already baked, just wrap it tightly in plastic wrap and it will keep in the freezer for a couple of months. Thaw it in the fridge or at room temperature and it can be reheated in the microwave or in a warm oven.

If it’s unbaked, think about preparing it in a foil pan so your regular pie dish isn’t tied up in the freezer for a long time. You might need it!

Wrap it tightly and it will be ready for you up to several months from now. Thaw it in the fridge, then bake it off according to the recipe instructions below. 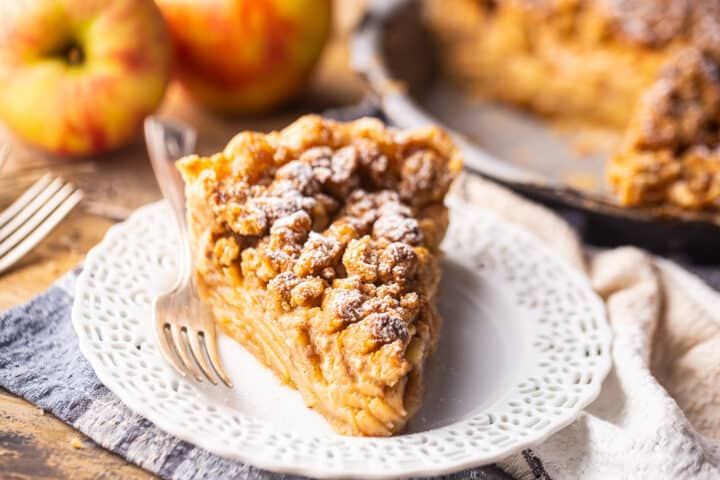 A FEW MORE OF MY FAVORITE RECIPES: 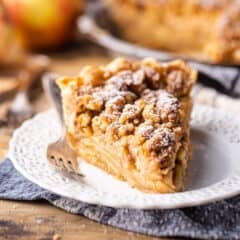 The most magnificent Dutch apple pie recipe! Softly spiced seasonal apples, topped with a crunchy, buttery crumb topping. Out of this world!

*Cover the pie loosely with foil if the topping is getting too brown before the apples have finished cooking.