Do you have a banana lover in your life? Make them this Banana Cream Pie! With plenty of fresh bananas, fluffy custard filling, and sweet whipped cream, nestled into a flaky, buttery crust. It’s such a treat! 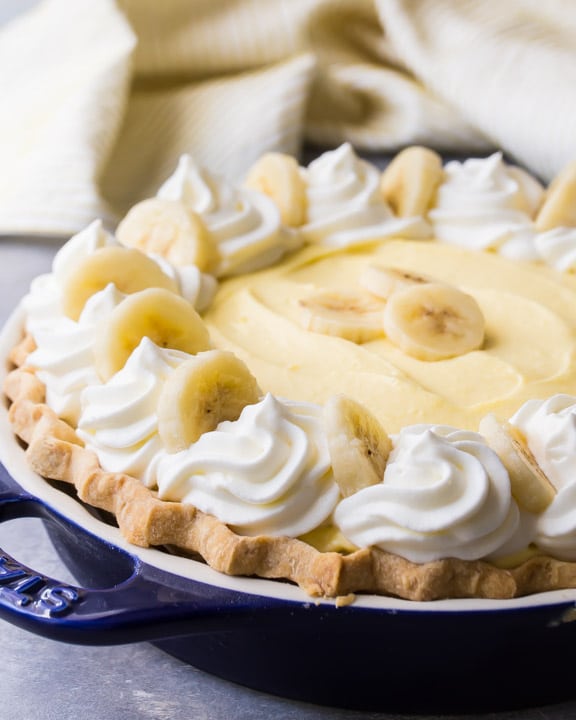 Once again, I have a Father’s Day recipe for you today! Last week it was Boston Cream Pie, for my dad, but this week it’s Banana Cream Pie!

I made this recipe in honor of my husband. He’s a great dad to our two boys, and he’s been begging me to make banana cream pie foreverrrrrr.

His moment has finally arrived!

My husband loves pie. He told me once that if given the choice between pie or cake, he’d take pie every time. Some of his favorites (besides banana cream!) include Coconut Cream Pie and Peanut Butter Pie. And he LOVED when I made Nutella Pie with Pretzel Crust.

But today it’s all about the banana, baby. I’m really glad he pushed me to create this recipe, because it ended up being such a treat! 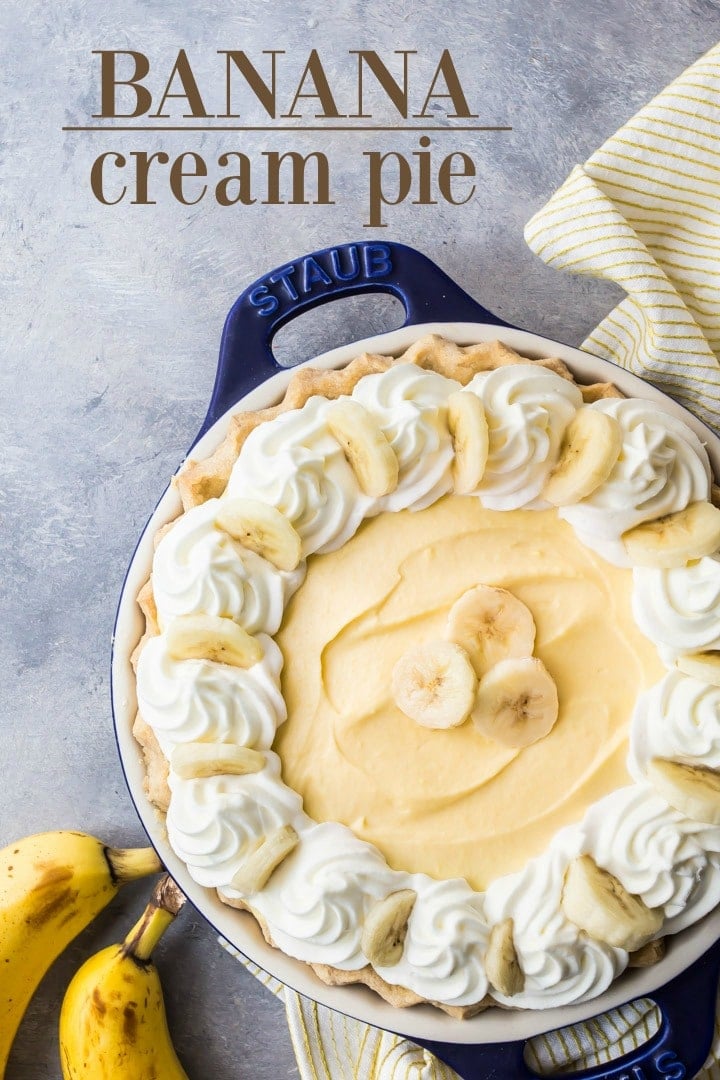 WHAT IS BANANA CREAM PIE?

Banana Cream Pie is made up of 3 main components: the crust, the filling, and lots of whipped cream on top.

Traditionally, banana cream pie starts with a pre-baked, butter-based pie crust. You can read all about my favorite recipe here: Perfect Homemade Pie Crust. There’s a special technique that makes this crust so incredibly flaky! It’s almost like puff pastry, with all the layers. Definitely check it out!

The filling begins with Pastry Cream, which is a rich custard similar to vanilla pudding (but better!). You can just use that, as-is (your pie will be firmer and not quite as tall), but for this banana cream pie recipe, I chose to fold in a little whipped cream. It makes the filling so fluffy and good!

Make sure you add plenty of fresh bananas! It is banana cream pie, after all. This recipe has 2 layers of sliced bananas in the filling, plus a few more slices on top for garnish. And big swirls of fresh whipped cream!

The filling is not baked, but the crust typically is.

Usually the crust is just a regular baked flaky pie crust, but you can make it with a cookie crumb crust if you want a no-bake option. Check out the recipe here: Graham Cracker Crust. <--I think it would be really good if you subbed Vanilla Wafers for Graham Crackers! Almost like banana pudding. Yum. 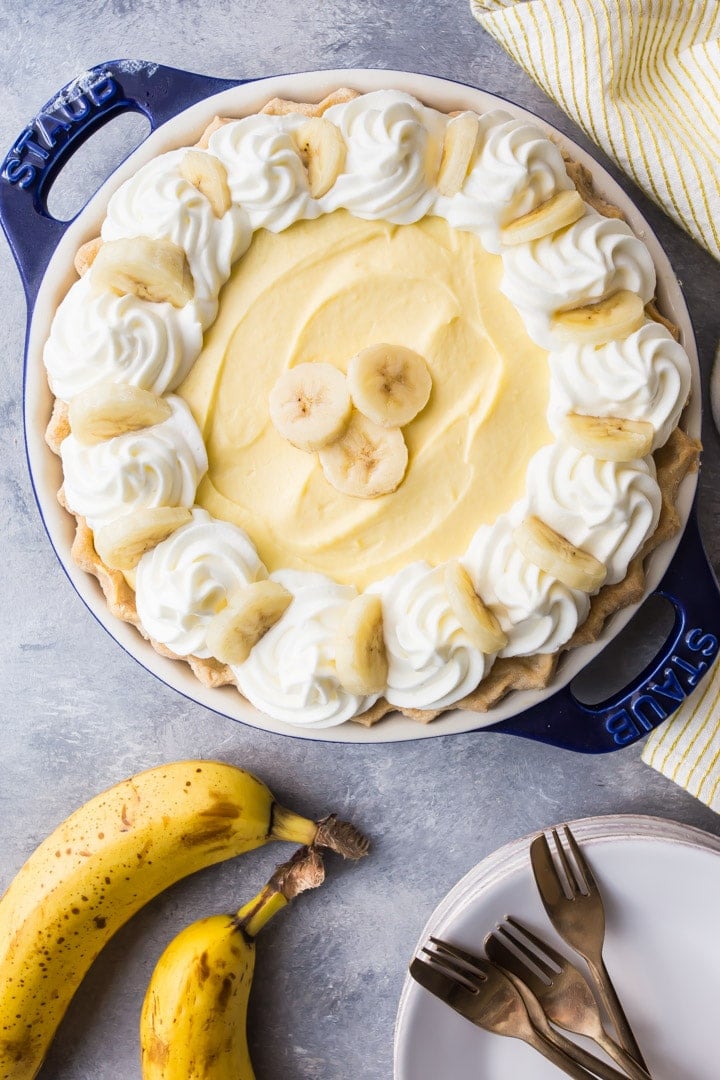 CAN BANANA CREAM PIE BE FROZEN?

You can totally freeze this banana cream pie! It will freeze hard, like an ice cream pie. You might want to leave it out at room temperature for 10 minutes or so, just so that it’s easier to slice.

Frozen banana cream pie is so good! This would be a great way to serve it during the hotter summer months.

CAN BANANA CREAM PIE BE MADE AHEAD?

Many of the components of this banana cream pie can be made ahead.

I would definitely make the pie dough at least a day or two ahead, so that it has plenty of time to rest & chill in the fridge. You can bake it 24 hours before you plan to fill it. Just keep it wrapped in a plastic bag so it doesn’t get stale.

The pastry cream also does best if it’s made ahead. I like to give it at least two hours in the fridge to cool completely and firm up. Overnight is even better! It will keep in the fridge for several days.

But you need to watch out with the garnishes.

The bananas that are layered inside the filling can do ok for while, because the air doesn’t really get to them and turn them brown. But the slices that garnish the top of the banana cream pie will start to oxidize pretty quickly. So I would leave those off until just before serving.

And whipped cream does tend to lose its volume over time. It can deflate or weep. So I would also save that for just before. Or, you can top the pie with this Whipped Cream Frosting. It’s got a few secret ingredients that make it more stable so you can make it up to 48 hours ahead.

WHY IS MY BANANA CREAM PIE FILLING RUNNY?

The pastry cream will thicken up a lot as it cooks. Just as it starts to come to a simmer, it will tighten up to almost a pudding-like consistency. And then it will become even more firm as it cools.

The whipped cream should also be quite stiff. You can get a better sense for what I mean if you check out the recipe video below. Whip it to a very stiff peak, and fold it into the pastry cream gently, so as not to knock all the air out.

I would also suggest folding the whipped cream into the pastry cream at least 2 to 4 hours before you plan to serve it. Fill the pie crust with the cream and the bananas, and pop it right into the fridge to chill so it stays nice and firm.

Banana cream pie is best served cold! So definitely keep it in the fridge if you can. It’s so refreshing and a perfect dessert for the warmer months. 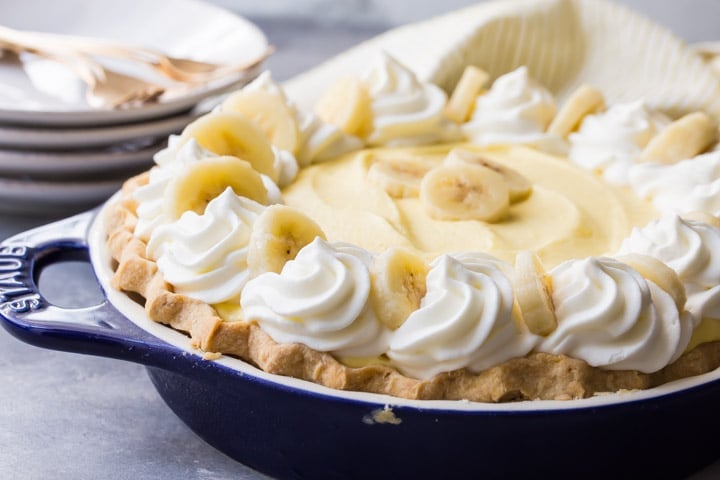 You’re going to love this banana cream pie recipe! It’s so good because everything is made from scratch. You just can’t beat that for taste! So if you have a banana cream pie lover, definitely make them this pie! It will make them so happy! 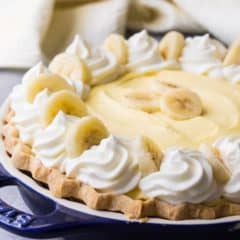